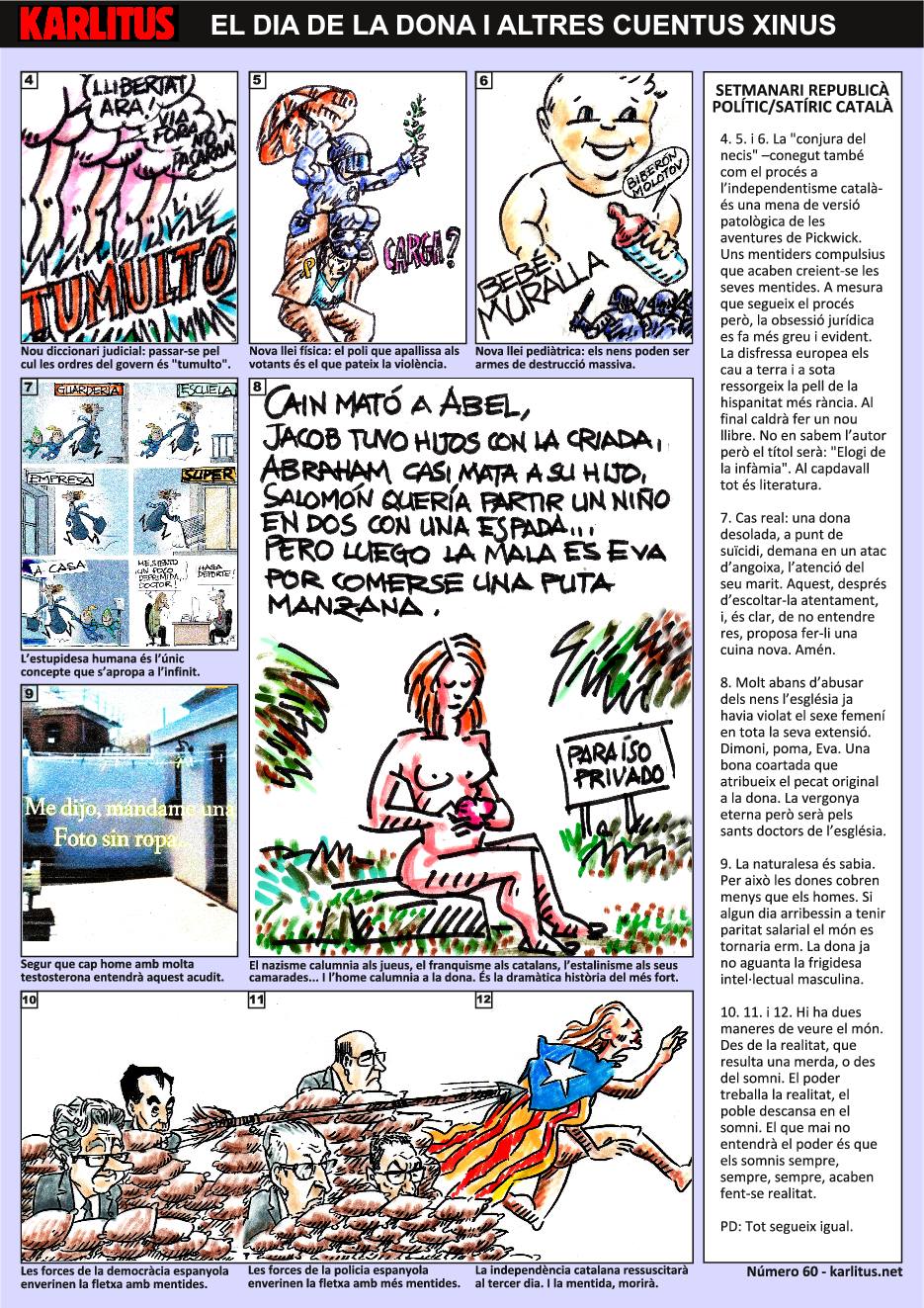 VIGNETTE 1. Text: Motherhood, Woman, Image, Woman, Rights, Woman, Sex, Woman, Work, Woman.
When a man is deficient intellectually, morally and sentimentally he assaults women. It is an act of revenge for his miserable condition. It’s the same with Trump and company. They use force to hide their embarrassing impotence.

1.- Motherhood is the first oppression for women. They are obliged to get married to become a mother and this affects them adversely before they give birth. A woman must set aside her aspirations, she’s forced to play with dolls from a young age, she is distanced from school, she is nourished with conformity and, in the end, she is obliged to marry any Tom, Dick or Harry to be able to bear a child that she will have to look after all alone practically. It’s altogether a bad business.


VIGNETTE 2. Text: From Daddy (or the Pope) to Mother Francesca.
Pope Francis, determined to combat the sins of the Vatican, plans to change sex and become the first popess. He’ll just have to make sure nobody kills him before.

2.- When the church is run by women will it be the girls who are harassed sexually?


VIGNETTE 3.
Equality between men and women can only be found where there’s poverty, hunger, illness and prisons. Catalan independence supporters know this.

3.- The Spanish courts are absolutely fair. They’ll accuse men and women indiscriminately - the only requirement is that they should be innocent... and if possible, Catalan independentist supporters.

SECOND TITLE PLAN: THE DAY OF WOMEN AND OTHER TALL TALES


VIGNETTE 4. Speech bubble: Freedom now / Everyone onto the streets (to defend the city) / They shall not pass.
A new dictionary of judicial terms: disobedience i.e. taking no notice of what the Spanish government commands and orders becomes a “tumult” of people in violent rebellion. [Note: in order to sentence the Catalan political prisoners to prison for 25 years or more, the Spanish judges need to prove that a violent rebellion took place on the day of the referendum on October 1 2017. The hundred or more police witnesses have been instructed to paint a picture of violence as they give evidence, and use certain key words implying violence, one of which is ‘tumult’, to describe the behaviour of the voters they attacked.]


VIGNETTE 5. Text: A police charge?
A new law of physics: the policeman who beats up the voters is the one who suffers from violence.


VIGNETTE 6. Speech bubble: A molotov cocktail in a baby bottle. Text: A (human) wall of babies.
A new children’s law: children can be weapons of mass destruction. [Note: The police witnesses claimed that the referendum voters were a wall of violent agressors who had put babies and old folk in the front line to stop the police from attacking].


4. 5. and 6.- The "conspiracy of fools" - also known as the trial of Catalan independence-seekers - is a kind of pathological version of Pickwick's adventures. Compulsive liars end up believing their own lies. As the trial continues, however, the obsession with making the courts punish people for having political ideas that the state doesn’t like becomes more and more obvious.
The European robe that the Spaniards had dressed up in when joining the European Union slips to the ground and in their nakedness they reveal their fierce untamed extreme Spanishness. In the end it will be necessary to write a book about it all. We do not know the author yet but we have the title: "A Eulogy for Infamy." It is, when all is said and done, pure literature – in this case, a very bad tragi-comic novel come to life.


VIGNETTE 7. Text: Nursery. School. Workplace. Supermarket. Back home. Speech bubble: Doctor, I’m feeling a little depressed. Try doing some sport.
Human stupidity is the only aspect of mankind that is infinite. And cynicism is too.

7.- A real event: a desolate woman, on the verge of suicide, and in an attack of anguish, demands her husband’s attention. After listening attentively, and, of course, not understanding anything, he offers to buy her a new kitchen. Amen.


VIGNETTE 8. Text: Cain killed Abel, Jacob had children with his servant-girl, Abraham almost killed his son, Solomon wanted to cut a child in two with his sword... But then it turns out the wicked one was Eve for eating some damned apple. Private Paradise.
Nazism attacked the Jews, Francoism attacks the Catalans, Stalinism attacked its comrades... And the husband attacks the wife. They think it makes them stronger and invincible.

8.- Long before abusing children, the Church had already gone against the whole female sex. The Devil, the Apple, and Eve. A fantasy that invents original sin and blames women for it. In fact, it’s not the womenfolk who should be eternally shamed but the holy masters of the Catholic Church.


VIGNETTE 9. Text: He said to me – send me a photo of yourself with no clothes on.
Surely no man with an ample reserve of testosterone will understand this joke.

9.- Nature is wise. That is why women earn less than men. If someday they were to achieve wage parity, the world would fall apart. But women can no longer bear the intellectual frigidity of the male of the species.


VIGNETTE 10.
The essence of Spanish democracy poisons the arrow tip with lies.


VIGNETTE 11.
The essence of the Spanish police poisons the arrow tip with more lies.


VIGNETTE 12.
Catalan independence will resurrect on the third day. And the compulsive lies will end.


10. 11 and 12.- There are two ways to see the world. With the naked eye – and it’s totally crappy. Or through a dream of what it might be. Those in power prefer the existing reality. The people dream of what it could be. What those with power don’t understand is that these dreams will always, without exception, end up becoming reality.