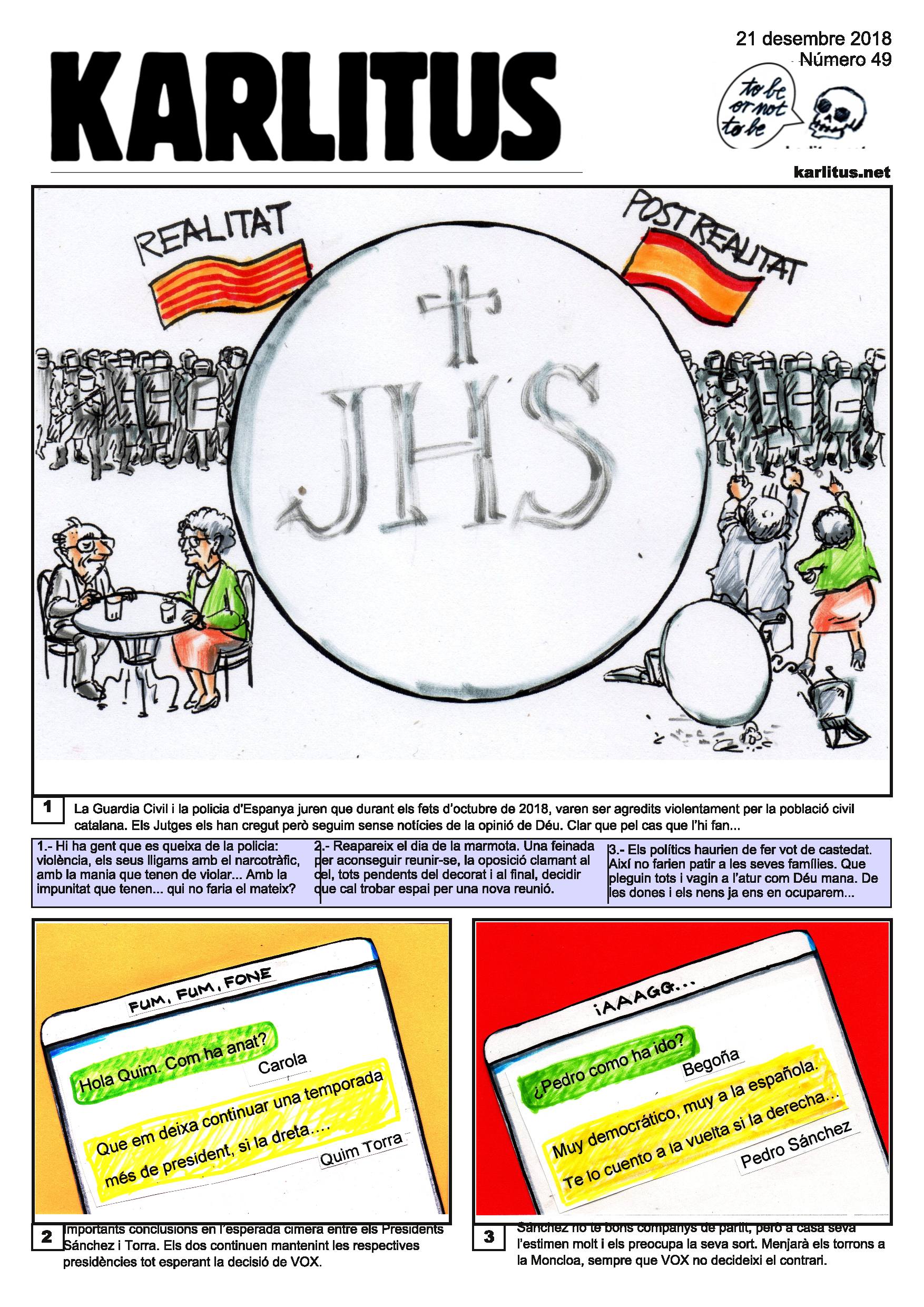 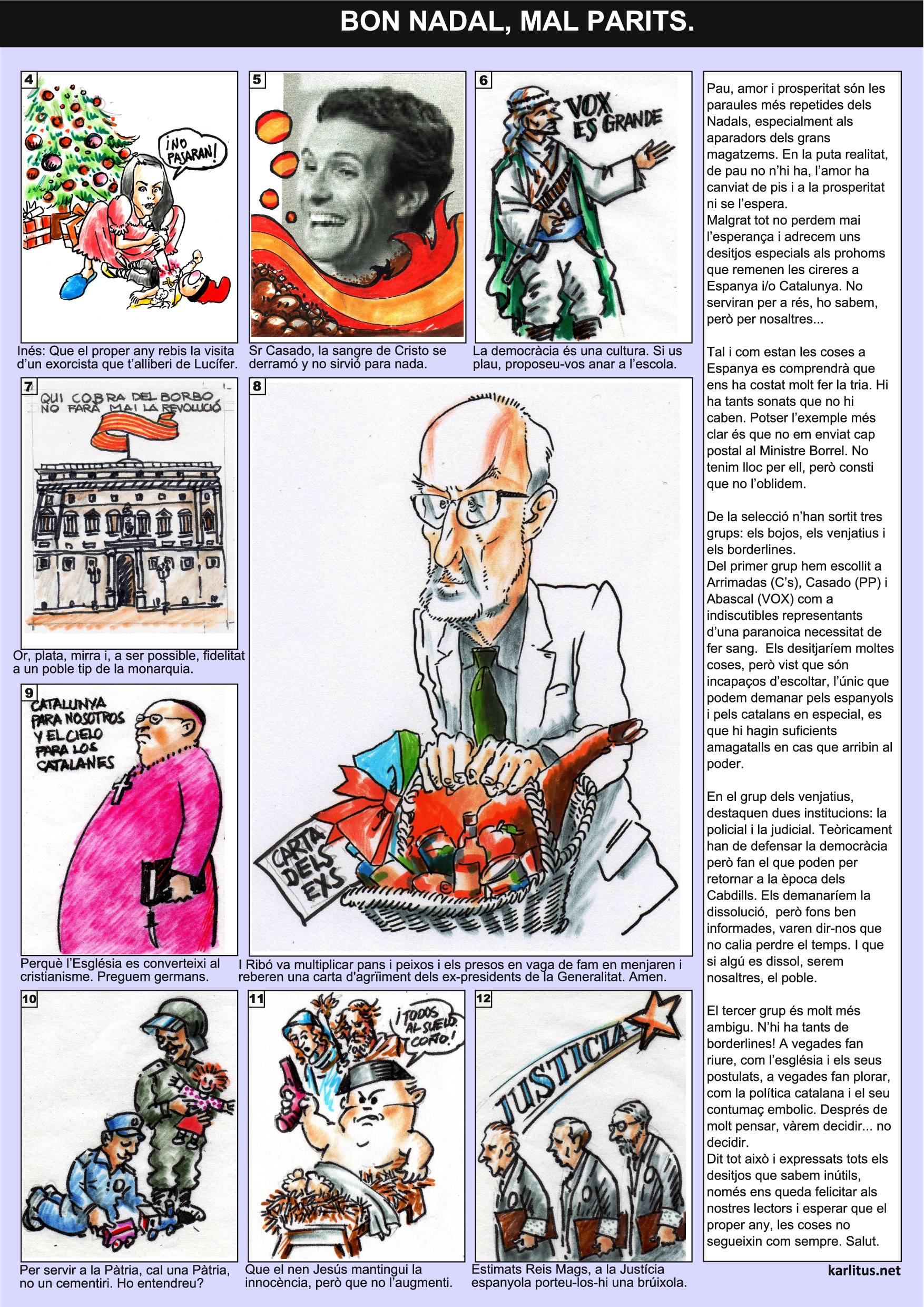 Keywords : October 2018. Police violence. The meeting between Sánchez and Torra. Impunity. VOX. Merry Christmas. Rafael Ribó. The Three Kings of The Orient. Half-cretins. They shall not pass.
Previous
Next

VIGNETTE 1. Text: Reality. Post-reality.
The paramilitary Civil Guard and the Spanish police swear that on the day of the referendum vote in October 2017 they were violently attacked by the Catalan civil population. The judges have accepted their accusations as the police never lie, but it would be interesting to hear God’s opinion of it all. But since they never take any notice of him...
1.- There are people who complain about the police: their violence, their links with drug traffickers, their liking of gang rapes... If we all had the same impunity that they have... who wouldn’t do the same?

VIGNETTE 2. Text: Carola: Hello Quim. How was it? Quim Torra: Let me continue one more legislature as president, if the right-wing parties...
Important conclusions as we await the meeting between Presidents Sánchez and Torra. The two continue to serve as president while waiting the decision of VOX.
2.- Groundhog day again. It’s one hell of a job to arrange a meeting, and the Opposition screams to high heaven. The venue has to please both sides, and in the end a meeting has to be arranged to decide on where to hold the meeting. We’re going round in circles.

VIGNETTE 3. Text: Begoña: Pedro how did it go? Pedro Sánchez: It was very democratic in a Spanish sort of understanding what democracy is. I’ll tell you about it when I get back – if the right-wing parties...
Sánchez’s party comrades are not the ones he’d like to have, but at home in Spain they love him and they worry about his future. He’ll enjoy his Christmas pudding in the Government House - if VOX don’t decide otherwise.
3. - Politicians should take a vow of chastity. In this way they wouldn’t make their families suffer. They should all give up their jobs and they should all be on the dole, like normal people. We’ll see to the women and children ...

VIGNETTE 4. Text: They shall not pass!
Inés: May you be visited by an exorcist in the coming year who will release you from Lucifer’s grasp.

VIGNETTE 5.
Mr. Casado, the blood of Christ poured out of his body to no purpose.

VIGNETTE 6. Text: VOX is Great.
Democracy is a culture. We suggest that you all please go to school.

VIGNETTE 7. Text: Whoever is in the pay of the Bourbon King will never be part of the revolution.
Gold, silver, myrrh, and, if possible, fidelity to a people who are heartily sick of the monarchy.

VIGNETTE 8. Text: Letter from the ex-presidents.
And Ribó did multiply the bread and fishes and the hunger strikers ate of them and received a letter of thanks from the ex-presidents of the Generalitat. Amen. [Note: The Catalan Ombudsman has spoken out in protest at the illegal denial of the political prisoner’s civil rights].

VIGNETTE 9. Text: Catalonia for us and heaven for the Catalans.
May the Catholic Church one day convert to Christianity. Let us pray, fellow believers.

VIGNETTE 10.
To serve the Fatherland, one needs a Fatherland, not a cemetery. Do you understand?

VIGNETTE 11. Text: Everyone get down on the floor!
May the baby Jesus keep his innocence, but may it not become greater.

Peace, love and prosperity are the most repeated words at Christmas, especially in the windows of the department stores. In reality, there is no peace, Love has moved house and prosperity is nowhere in sight and is not expected to show up any time soon.
In spite of everything we never lose hope and we address our special desires to the bigwigs who hold the reins of power in Spain and / or Catalonia. They are completely useless, but for us...
As things stand in Spain, we will understand that it has cost us a lot to make the choice. There are so many lunatics that do not fit in. Perhaps the clearest example is that we have not sent any greeting cards Minister Borrell. We have no place for him, but we shall not forget him.
Three groups have come to the fore: the crazies, the vengeful and the half-cretins.
From the first group we have chosen Arrimadas (Citizens’ Party), Casado (The People’s Party) and Abascal (VOX) as indisputable representatives of a paranoid need to draw blood. We would like a lot of things, but, given that they are incapable of listening, we can only ask for the Spaniards, and the Catalans in particular, that there are enough places to hide in the event they get into power.
In the group of the avengers two institutions stand out: the police and the judiciary. Theoretically they have to defend democracy but they do what they can to return to the time of the Knights on Horseback. We would ask for their dissolution, but well-informed fonts have told us not to waste our time. And if any group is broken up and dismantled, it will be us, the people.
The third group is much more ambiguous. There are so many half-cretins! Sometimes they are downright laughable, like the Catholic Church and its ridiculous postulates, and sometimes they make us weep, like present Catalan politicians. After a lot of thinking, we decided ... not to decide.
Having said all this and having expressed the customary useless wishes, all that remains is to thank you, dear readers of Karlitus, for your support and hope that next year things will not continue as usual. All the best!