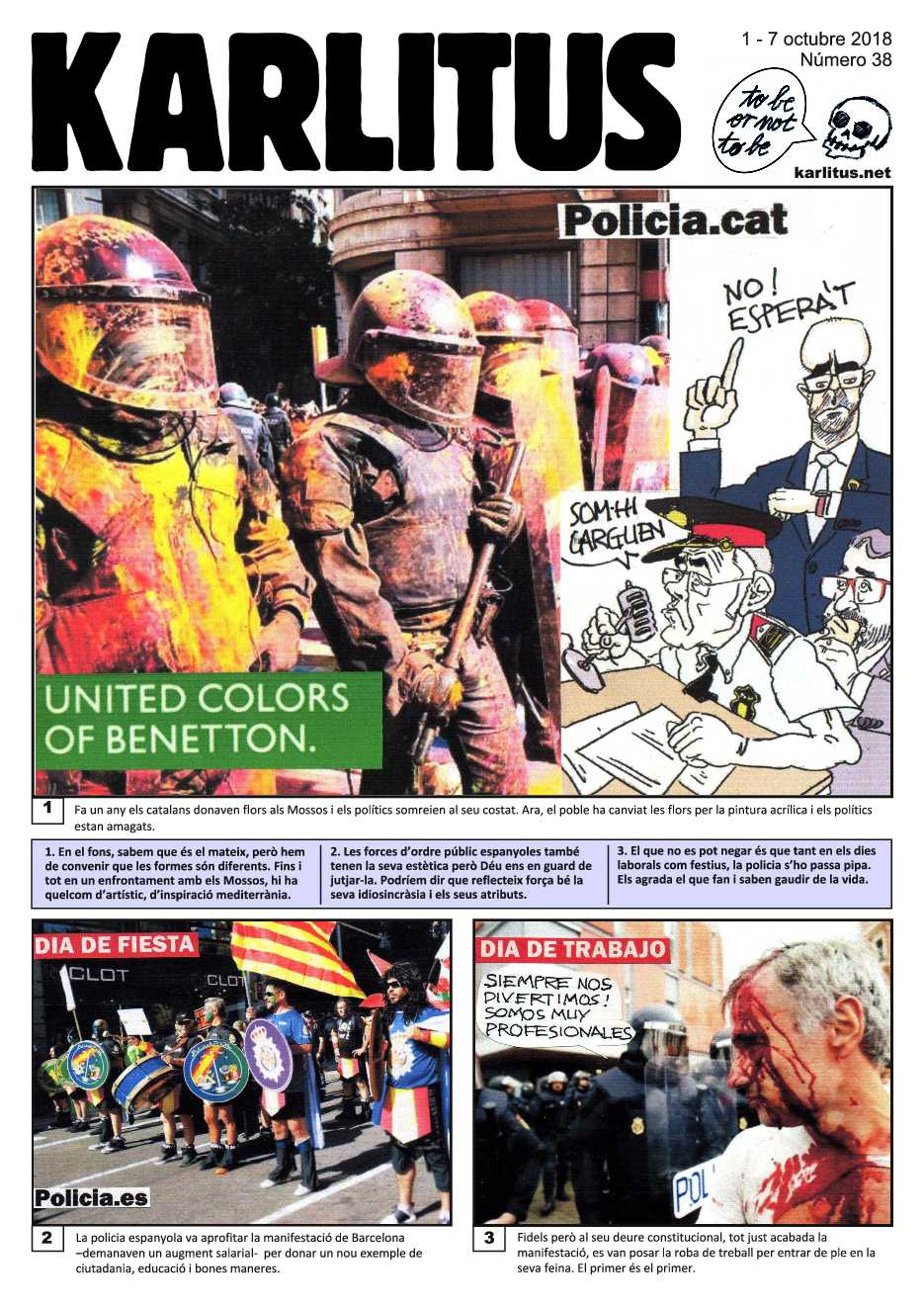 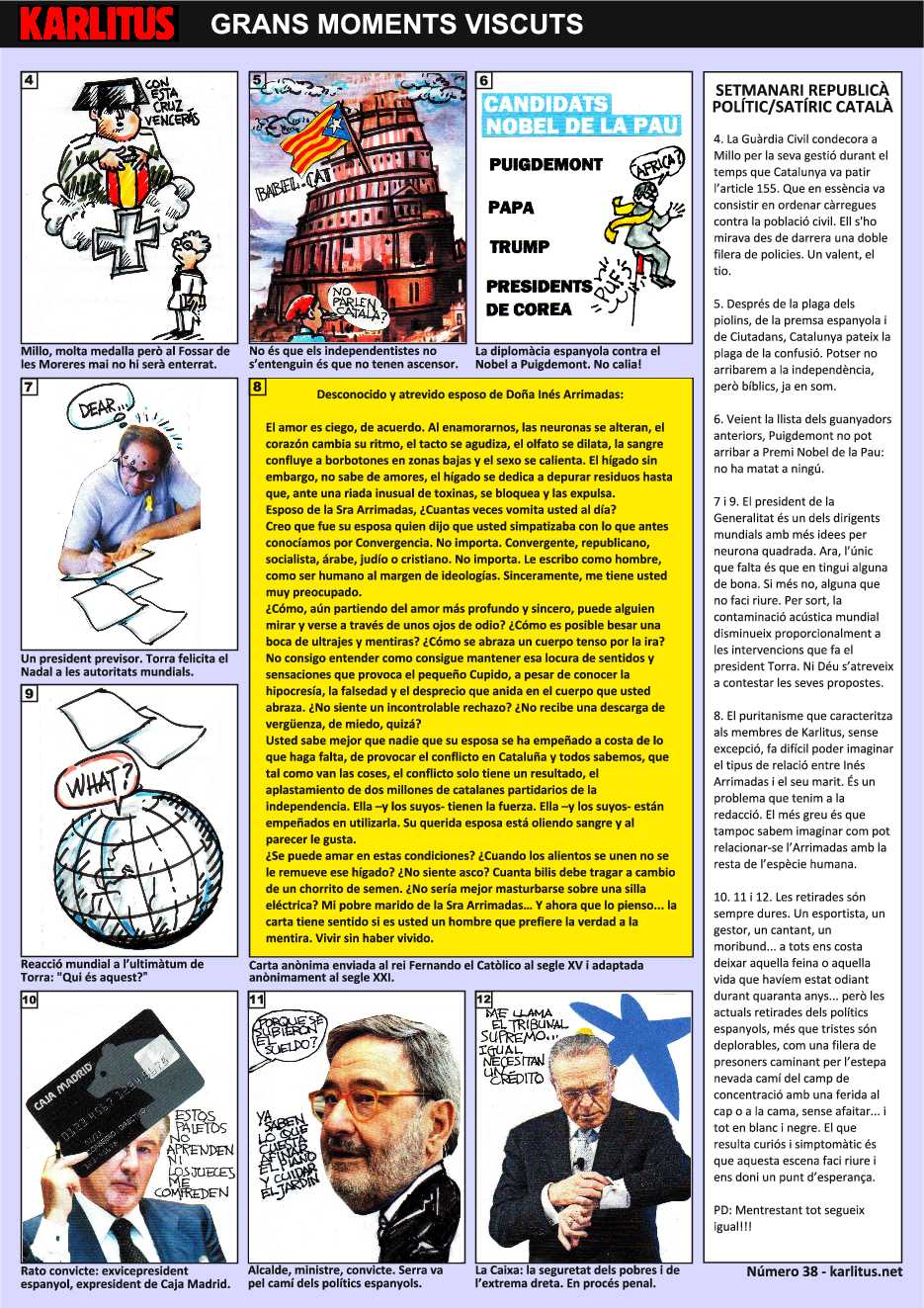 1.- Substantially we know that it’s the same thing really, though different. Flower arranging is a popular art, but even a confrontation with the Mossos has its artistic side too.
CARTOON 2 Text: A Day Off Work.

The Spanish police made the most of the Barcelona demonstration – ostensibly to demand higher salaries - to show their model citizenship, their consideration for others and their good manners.

2.- The Spanish police forces also have their sense of style but far be it from us to comment on it, except to say that it really suits them, knowing just what they are and their way they go about things.

CARTOON 3 Text: We’re real professionals, but we always have great fun at work! A Working Day.

Loyal to their mission of serving the Spanish Constittion, once the demonstration was over they put on their working clothes and applied themselves enthusiastically to the task at hand.

3.- What cannot be denied is that the police always have a wonderful time whether working or on their days off. They like what they do and know how to enjoy life.

CARTOON 4 Text: With this cross you will win against all odds.

A load of medals for Millo but he can be sure he’ll never be buried in the Fossar de les Moreres. [Note: Under the Partido Popular government Millo, although a Catalan, was the Spanish Government’s “governor general” in Catalonia and faithfully carried out its orders. The Fossar de les Moreres (“mass grave by the mulberry trees”, now a public square, was the burial place of Catalans killed while defending the city of Barcelona against Spanish invaders during the Siege of Barcelona at the end of the War of the Spanish Succession in 1714.)

4.- The Civil Guard [Note: a Spanish paramilitary force which along with the Spanish police took part in the attack on referendum voters 1 October 2017] gives Millo an award for his management skills during the time that Catalonia was administered under article 155 [Note: Name given to the measure allowing the suspension of the Catalan autonomous government and imposing direct rule from Madrid]. Essentially it meant ordering police baton charges against the crowds. He watched it all from behind two rows of policemen. A valient man, indeed.

It’s not that independence supporters are at loggerheads through all speaking different languages – it’s that there’s no lift in the tower to get to heaven quickly.

5.- As well as the plagues of Spanish police and paramilitaries, the Spanish press and the Citizens’ Party [Note: a far-right Spanish nationalist party] Catalonia suffers from the plague of confusion. Perhaps we shall never get to see independence, but we can take comfort in the fact that we are a holy people since we are like an afflicted Biblical tribe.

The Spanish Diplomatic Corps gets into gear to oppose the nomination of Puigdemont for the the Nobel Prize. [Note: The Catalan president-in-exile. His name has been put forward as a possible recipient of the Nobel Peace Prize, much to the chagrin of the Spanish Government which maintains that he is a common criminal]. It’s just not fair!
6.- Going through the list of past winners of the Nobel Peace Prize, Puigdemont is obviously not a worthy candidate as he has never killed anyone.

CARTOON 7
A President at work. He’s already sending his Christmas cards to world authorities. [Note: The madate of the October 1 2017 referendum was the declaration of a Catalan Republic. The Catalan government is ignoring the verdict of the ballot boxes, though making grand statemnts in favour of a republic.]

7.- The President of the Catalan Generalitat is one of the world leaders with the most ideas per square neuron. Now all that’s missing is some which are actually good and not so laughable.


CARTOON 8
[Note: Arrimadas is the leader of the Catalan section of the far-right Spanish nationalist and anti-Catalan-language Citizens’ Party who is married to a former supporter of the Convergència Party, a now-dissolved centre-right Catalan and pro-Catalan-language party].

Text: Dear unknown but certainly daring husband of Lady Inés Arrimadas. Love is blind, that much we know. When we fall in love, our neurons are altered, our heart changes its rhythm, our senses are heightened, our blood is diverted to the lower regions of our bodies and we think of hot sex. The liver, however, ignores all this and carries on with its task of removing and metabolising toxins unless there is a sudden great flood of them and the body then expels them through the mouth. Dear husband of Lady Arrimadas, how many times do you vomit a day?

I think it was your wife who said that you previously supported the now defunct Convergència Party. It doesn’t matter. Who cares? Whether you are a Convergència supporter, a Catalan Republican, a Socialist, an Arab, Jewish or a Christian – none of that matters. I’m writing to you as a human being, regardless of ideology. To be quite honest, you’ve got me rather worried.

How is it possible for anybody, even in the thralls of love, to look into eyes which are so full of hatred? Or to kiss lips over which so many lies and insults have passed? Or to embrace a body rigid with anger?

I don’t understand, even though struck by Cupid’s arrow, how you can be at all passionate about Milady. Surely you’re aware of the hypocrisy, the falsehoods and the contempt lurking deep in the body that you take into your arms. Don’t you feel any repugnance? Don’t you feel any shame - or even fear?
You know better than anyone that your wife has been entrusted with a mission, to cause conflict in Catalonia, and we all know that the aim of all this is to break the will of the two million Catalan supporters of independence. She - and the people behind her - have the power to do this. And they are resolved to use it. Your dear wife smells blood and, apparently, she finds it an agreeable sensation.

Anonymous letter sent to King Fernando the Catholic in the 15th century in an anonymous 21st-century version.

Global reaction to the Torra’s ultimatum. Who on earth is that man?

9.- Fortunately, the more that President Torra speaks out, the more global noise pollution goes down. Even Almighty God himself dares not answer his proposals.

CARTOON 10 Text: Well, I really pulled the wool over the eyes of all those idiots out there. But why are the judges against me?
Roderigo Rato behind bars. The former Spanish Vice-President, and the former Director of Caja Madrid. [Note: Rato was found guilty of embezzlement when a director of the Caja Madrid savings bank].

CARTOON 11 Text: Why was your salary raised?
Well, it’s no easy task to tune the piano and to look after the garden!
From mayor to government minister to convicted felon. N. Serra treads the well-trodden path of Spanish politicians. [Note: The former Socialist minister is on trial with other ex-directors of a savings bank for grossly inflating their salaries knowing that the bank had insufficient funds and was on the point of collapse.]

CARTOON 12 Text: The Supreme Court is calling me ... maybe they need a loan.
The Caixa Savings Bank: The well-being of the poor and the extreme right. [Note: The CaixaBank has a social welfare programme but apparently too gives favourable treatment to the far-right Citizens’ Party].

10.11.12.- Stepping down is always hard. Whether we’re an athlete, a manager, a singer, someone who’s about to snuff it ... it's difficult to leave that job or that way of life we have destested for forty long years ... but the current cases of Spanish politicians leaving office is more than sad – it’s heart-rending. It’s as if they are prisoners walking in file in the snowy wastes bound for the concentration camp, unshaven and with wounds to the head or a leg... and all in black and white. The odd thing about it all is that this tragic scene is so comical it makes us roar with laughter and gives us all hope for the future.