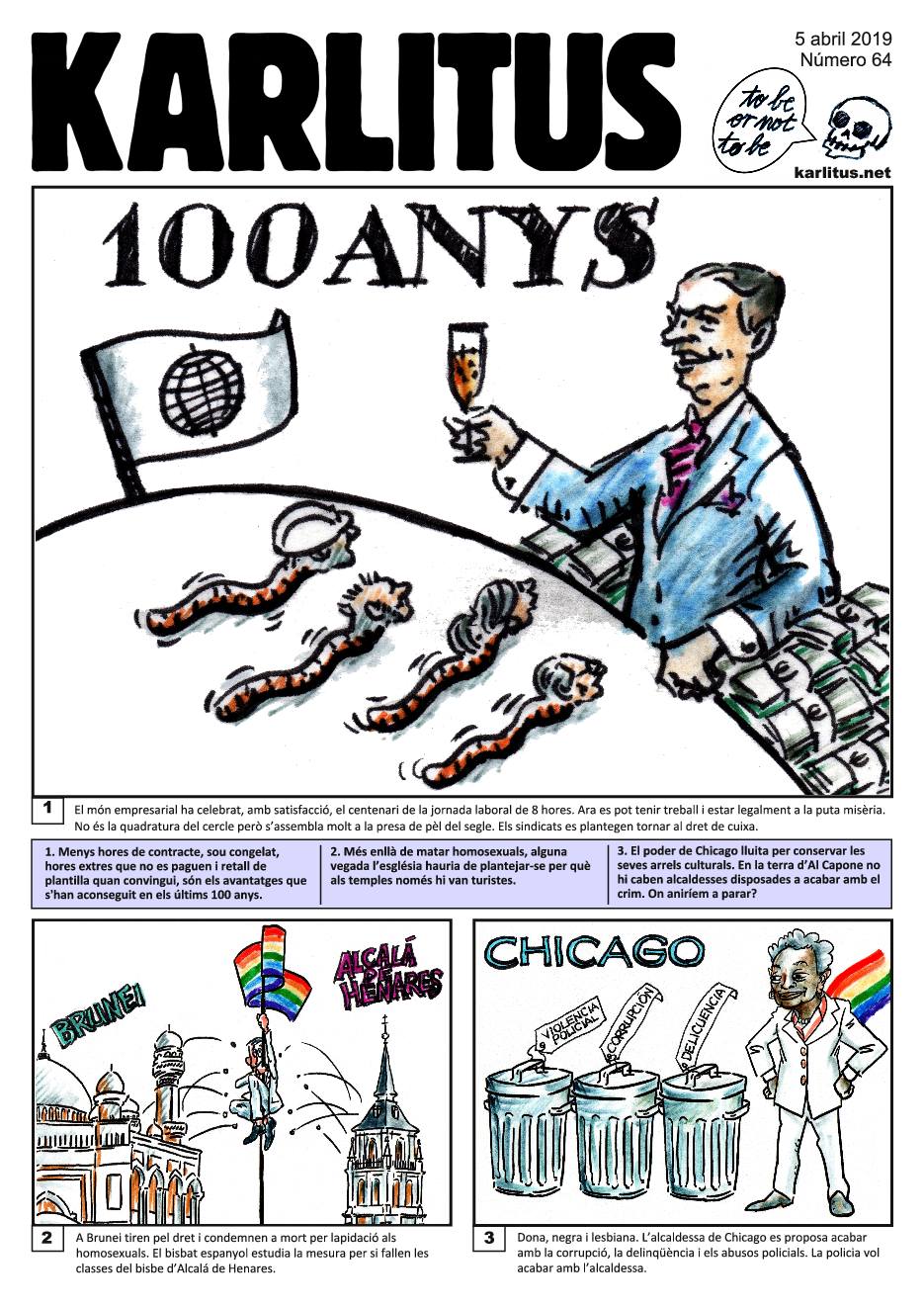 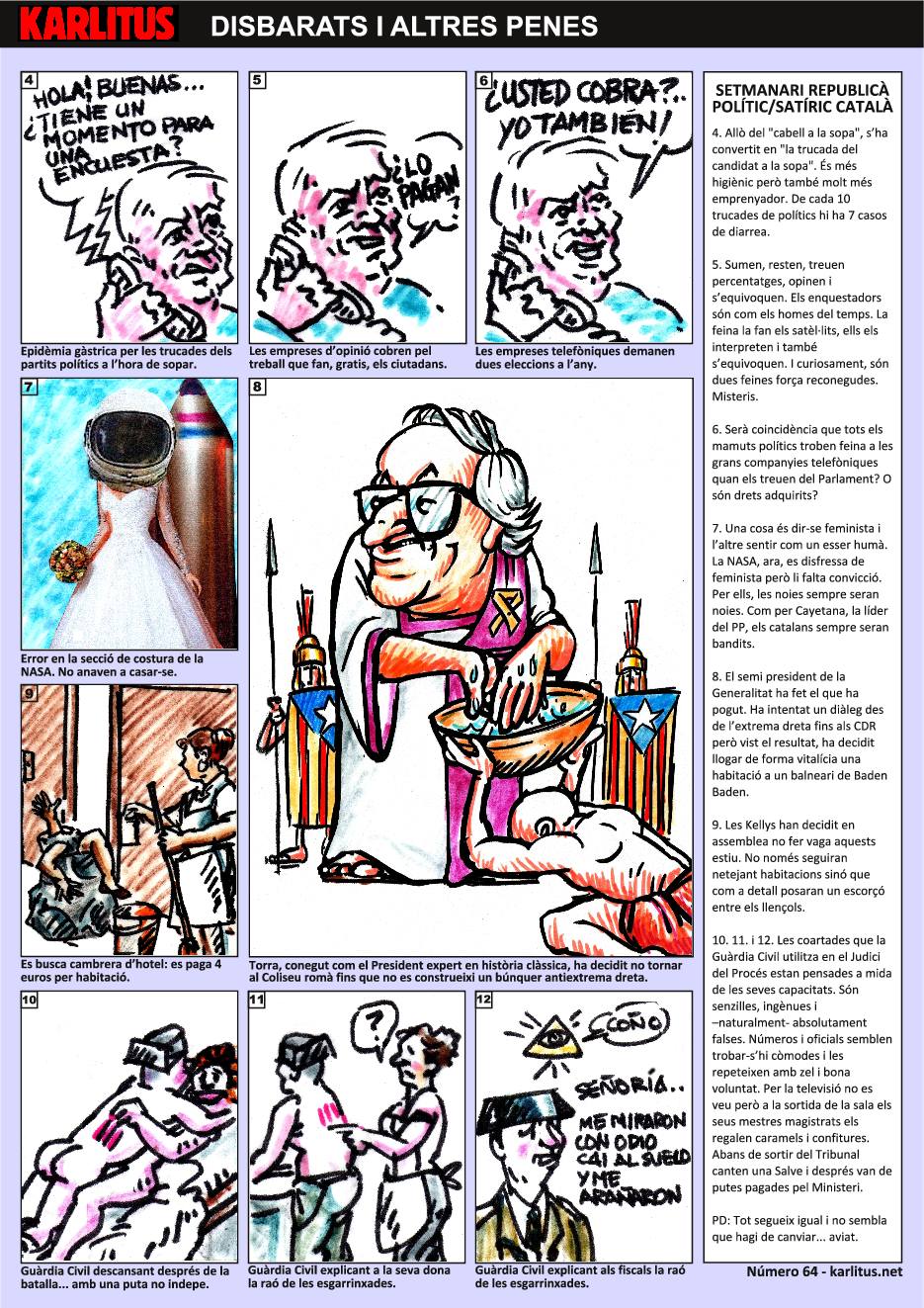 The business world has welcomed the centenary of the eight-hour work day. Now you can have a job – that is, be legally employed – but still find yourself in wretched circumstances. It is not the squaring of the circle, but it looks a lot like he greatest con ever. The unions are preparing for the announcement of the return of droit de seigneur.
1.- A legal work contract but for fewer hours, wages frozen, unpaid overtime, staff cuts whenever it suits the employer – these are the benefits that workers have won in the last one hundred years. Obviously, the rich are cleverer than we are.

VIGNETTE 2.
In Brunei, sharia law is introduced and homosexuals are condemned to death by stoning. The Spanish bishops form a commission to see if this law could be included in the Spanish Constitution for the students of the Bishop of Alcalá who fail their exams. [Note: It was revealed at the beginning of April that the Bishop of Alcalá de Henares holds conversion therapy courses in his diocese to cure homosexuals, through prayer, of their homosexuality].


2.- Before it starts killing off homosexuals, maybe the Catholic Church should consider why its churches are full – of tourists, and not congregations.

Woman, black and lesbian. The mayor of Chicago intends to put an end to corruption, crime and police abuses. The police want to kill the mayor.


3.- The authorities of Chicago struggle to preserve the city’s culture. In the land of Al Capone, there is no place for mayors willing to put a stop to crime. Where would happen if they actually did so?

VIGNETTE 4. Speech bubble: Hello, good day. Can you spare a moment to answer an opinion survey?
An epidemic of upset stomachs with the amount of phone calls at supper time by pollsters asking for voters’ intentions.
4.- It’s no longer a hair floating in the soup that puts people off their food. Now it’s the pollster who spoils the soup. It’s not so unhygienic as the hair in the soup but it’s a lot more annoying. Statistics show that for every ten calls from the pollsters there are seven cases of diarrhoea.

VIGNETTE 5. Speech bubble: Do you get paid for it?

The polling organisations charge for the work that the citizenry has done for them free of charge.


5.- The data is summarised, added together and subtracted, percentages are worked out, opinions are extracted and mistakes are made. The pollsters are like the weather forecasters. In their case, the work is done by satellites. The meteorologists interpret the data but they too draw the wrong conclusions from it. Curiously, both are well-regarded occupations. It’s a complete mystery why.

VIGNETTE 6. Speech bubble: You get paid? Me too!

The telephone companies ask for two programmed elections per year and an extra snap election if possible.


6.- Is it coincidence that the political beasts who come to the end of their political career and are not voted back into parliament find work as directors of large telephone companies? Is it a reward for all the work they’ve pushed in the direction of these companies?

VIGNETTE 7.
The dressmaking department of NASA has prepared the wedding dress, but now it seems that the wedding is off.
7.- One thing is to call yourself feminist and the other to treat women like normal human beings. NASA is now pretending to be a feminist organisation but they aren’t convincing many women. For them, their female employees are "the back-room girls" and they’ll always be “the girls”. As for Cayetana, the leader of the PP, the Catalans will always be bandits [Note: An extreme right-wing Argentinian marquess, resident in Madrid, but with Spanish nationality since 2007, who is standing as the People’s Party candidate for the Spanish parliament in Barcelona, with a profound dislike for Catalans and the Catalan language].

VIGNETTE 8.
Torra, known as the Interim Catalan President, and an expert in classical history, has decided not to return to the Roman Colosseum, until his personal guard builds a bunker to protect him from the Spanish far right.


8.- The semi-president of the Generalitat has done what he can. He has tried talking to the other parties in the parliamentary hemicycle, from left to far right, and with the CDRs [Note: groups of civil activists, Committees for the Defence of the Catalan Republic]. However, having seen the result of his endeavours, he has decided to rent a room for life in a spa in Baden Baden.

VIGNETTE 9.
Wanted. Hotel cleaners. No wages are offered, but you can ask the hotel guests for a tip.


9.- Les Kellys [Note: nickname for hotel cleaning staff] have decided in a meeting not to go on strike this summer. Not only will they continue to clean the hotel rooms but, what’s more, they’ll even do more work than is expected of them. They’ll put a scorpion between the sheets of every bed.

VIGNETTE 10.
A paramilitary Civil Guard resting after the attack on the voters on the first of October 2017... relaxing in a brothel (with an anti-independence whore).

VIGNETTE 11.
A paramilitary Civil Guard explaining to his wife the reason for the scratches on his back. The Catalans are very wicked people.


VIGNETTE 12. Text: Well I never! Your honour, they looked at me with faces full of hate. I fell down and the Catalans scratched me.
A paramilitary Civil Guard explaining to the judges the reason for the scratches on his back. The Catalans are very wicked people.

10. 11. 12.- The evidence given by the paramilitary Civil Guard in the trial of the Catalan political prisoners is tailor-made to fit the intellectual capacity of these agents of Spanish law and order. The evidence is simple, naïve, and, of course, absolutely false. The police commanders and the low-ranking police officers recite their evidence with enthusiasm and gusto. The cameras do not show the faces of the police in the televised trial, nor do they show them leaving the courtroom. Before they go down to the street the judges shake hands with them, and give them sweeties for being good boys and doing as they’re told. Then they hum the Spanish national anthem, and go to visit nearby brothels, all expenses paid, courtesy of the Minister of the Interior.