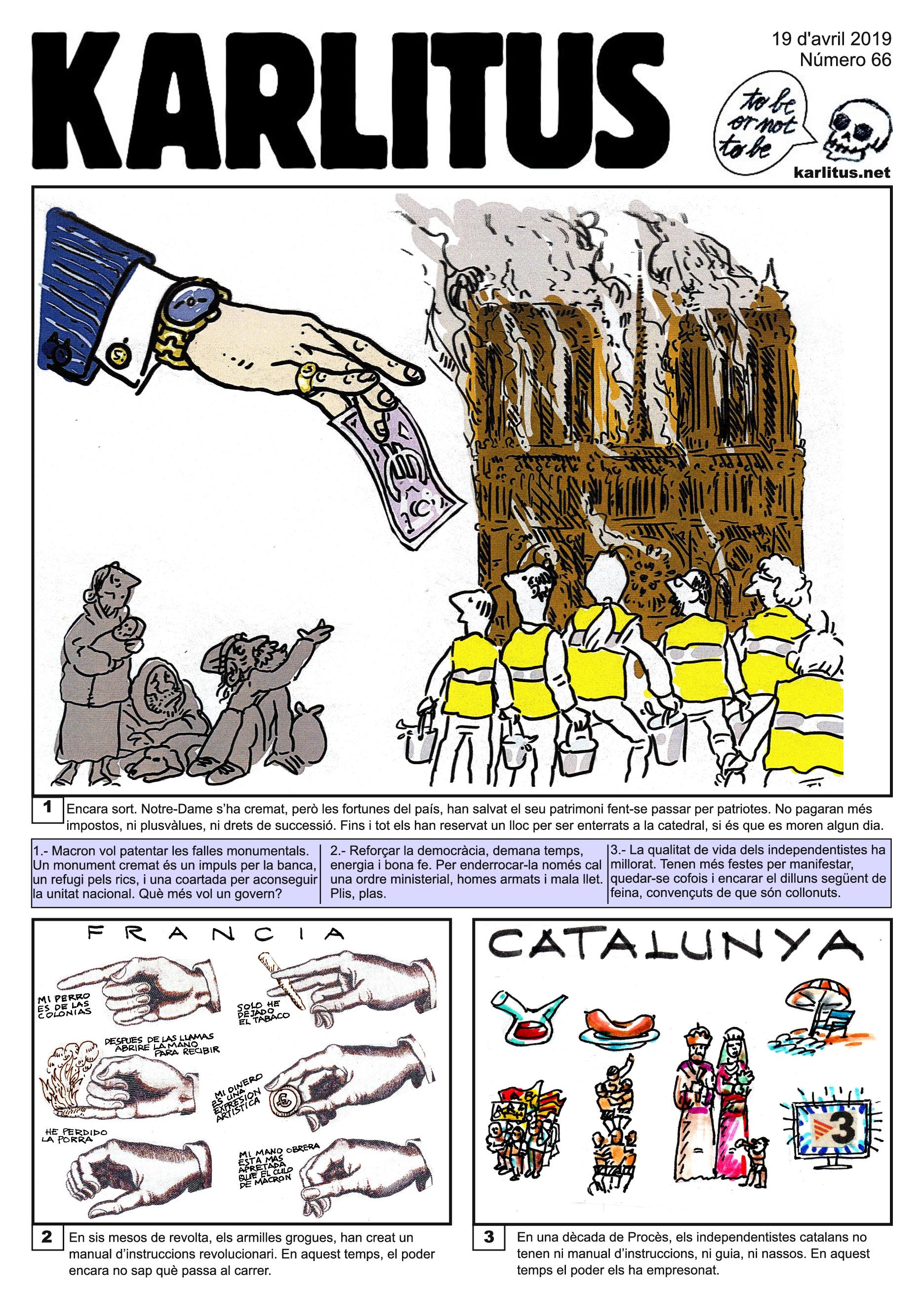 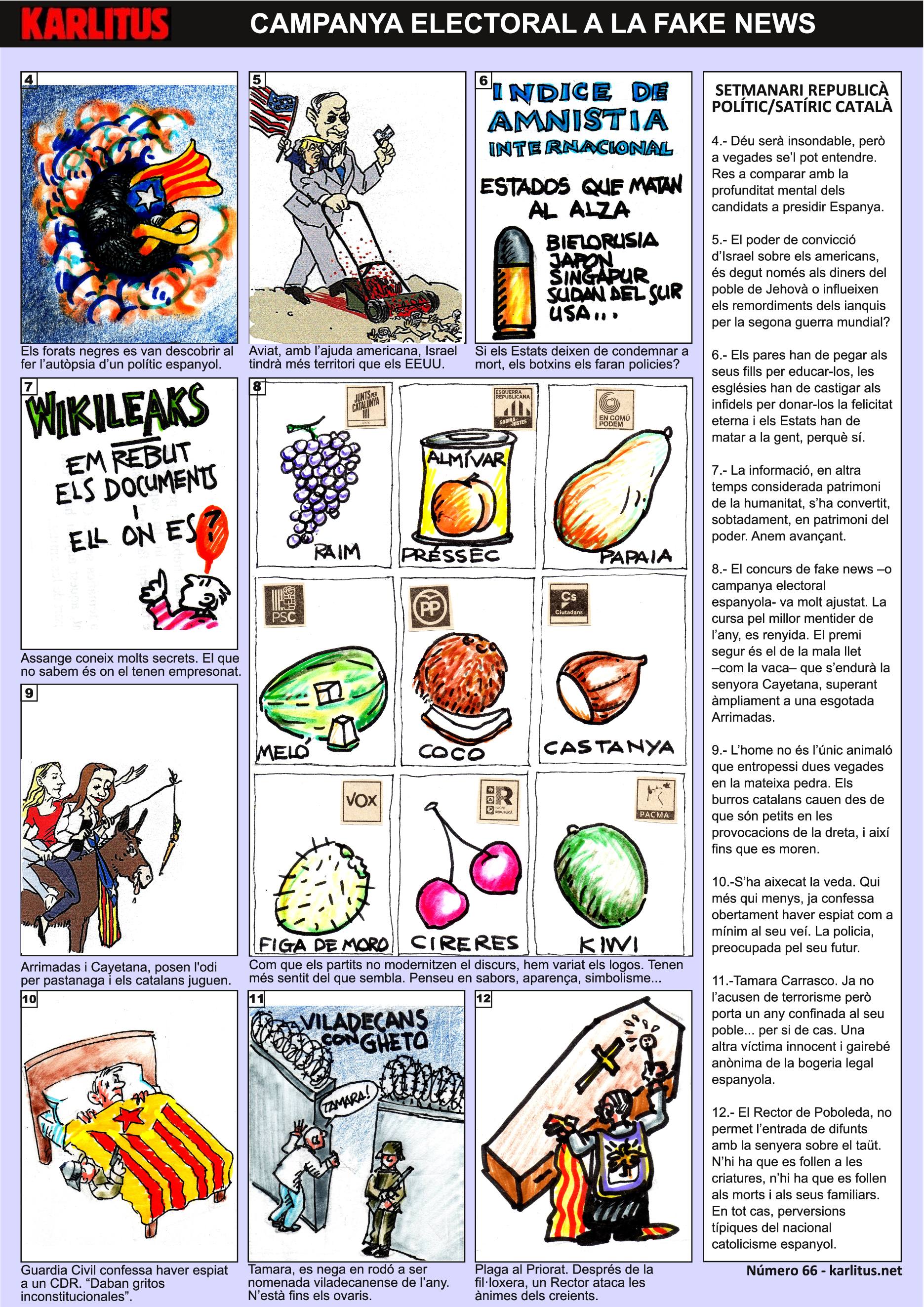 What a stroke of luck! Notre-Dame went up in flames, but France’s rich have safeguarded their fortunes by becoming patriotic. They will not have to pay more taxes, or surcharges, or give up their rights of inheritance. They have even been reserved a place to be buried in the cathedral if some day they should happen to die.

1.- Macron wants to patent the idea of burning down the country’s monuments. The charred remains of a monument is a boost for the banks, a tax haven for the rich, and a means of achieving national unity. What else does a government want?


VIGNETTE 2. Text: France. My dog is from the colonies. I’ve only given up tobacco. After the flames I’ll open up my hand to receive things. My money is artistic expression. I’ve lost the baton / club / cudgel. My workman’s hand is tighter than Macron’s bum.
In six months of revolt, the yellow jackets have created a revolutionary instruction manual. In all that time, the powers that be still don’t know what’s going on down in the street.

2.- To bolster democracy requires time, energy and dedication. But to dismantle it requires only a ministerial order, armed agents of the state, and fury against these lowly plebs who think they can challenge the government.

In the decade that the independence process has been taking place, the Catalan independence supporters had to work without any kind of instruction manual or guide, and not realising they’d need nerves of steel. The result? The state has imprisoned its leaders or forced them into exile.

3.- The quality of life for Catalan independence has improved. They are holding constant get-togethers to express their discontent and feel pleased that they’ve actually done something, and on Monday morning they go back to work as usual, convinced that they are the bravest of the brave.

Black holes were first discovered when the autopsy on a Spanish politician was being carried out.

4. - God is usually inscrutable in his ways but, even so, sometimes his actions can be understood. But there is no means at all of knowing what goes on in the dark mental recesses of the Spanish presidential candidates.

Soon, with American help, Israel will have more territory than the US has.

5.- Is Israel's influence on the Americans to be explained by the fact that Jehovah’s people have lots of cash, or does a guilty conscience for what happened in the Second World War have some sort of sway?

If governments do away with the death sentence, will the rôle of executioners be delegated to police officers?

6.- Parents need to beat their children to educate them, churches must punish the unbelievers so that they can have eternal happiness, and governments must kill people because that’s the way things have always been done.


VIGNETTE 7. Text: Wikileaks. We've received the documents, but where is HE?

Assange knows many secrets. What we do not know is where they have him imprisoned.

7.- Information, once considered the patrimony of humanity, has suddenly become a tool of power. Humanity is moving forward.

As political parties have not modernised what they say, we have updated the logos. They have much more meaning than it would appear. They suggest flavours, appearance, symbolism ...

8.- The fake news competition - or in other words the Spanish election campaign - is being very hard fought. But there is one sure contender for the best liar of the year. The prize will be for the lies and viperine words of Mrs. Cayetana, who has easily bettered the now exhausted Arrimadas. [Note: the PP candidate for the Barcelona seat in the Madrid parliament has been noted for her insulting speeches and the elevated number of untruths that they contain – in the style of the Citizens’ Party candidate Inés Arrimadas, who up until now had made this style of politicking her own].

Arrimadas and Cayetana spew out their hatred and the Catalans fall into the trap and protest at their fabrications and insults instead of ignoring them. Daft Catalans.

9.- Man is not the only animal that trips over the same stone twice. The Catalans are daft because they rise to the bait every time – the provocations of the right - and have always done so and always will.

The Guardia Civil [Note: Spanish State paramilitary body] confesses to spying on a CDR group [Note: Committee for the Defence of the Catalan Republic]. "They shouted things most unconstitutionally".

10.- Now we know. The paramilitaries admit they spend much of their time spying on people. Maybe they’re worried they’ll have to live in a Republic and their services will no longer be required.

VIGNETTE 11. Text: Viladecans with a ghetto.

Tamara refuses to be honoured as Citizen of the Year for her home town of Viladecans. She’s fed up with the place. [Note: A Spanish judge has confined her to her village, originally on charges of unspecified ‘terrorism’].

11.-Tamara Carrasco. The charge of terrorism against her has been dropped but even so she has been confined for over a year to her village and is not allowed to travel out of it... just in case. Another innocent and previously unknown victim of Spanish legal madness.

Plague in the Priorat. After the phylloxera [Note: a sap-sucking insect which devastates vineyards. El Priorat is a wine-producing area], a Rector attacks the souls of the believers.

12.- The Rector of Poboleda has decided that coffins draped with a flag (i.e. A Catalan flag) will not be permitted in his parish. Some priests bugger little boys and now there are priests who bugger the dead and their families in mourning. But that’s par for the course for the Catholic Church peddling the perverted Roman Catholicism of the Spanish bishops.