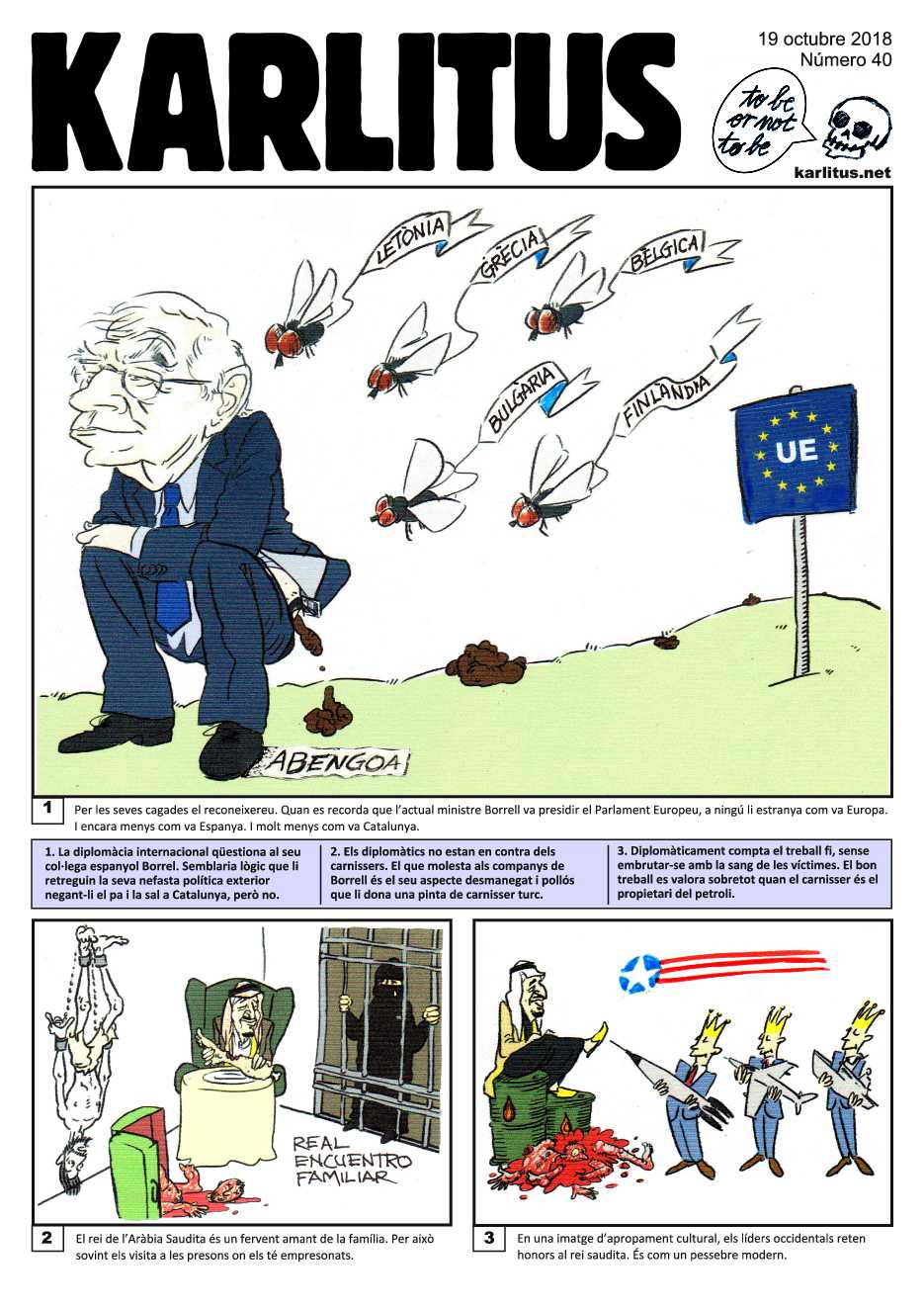 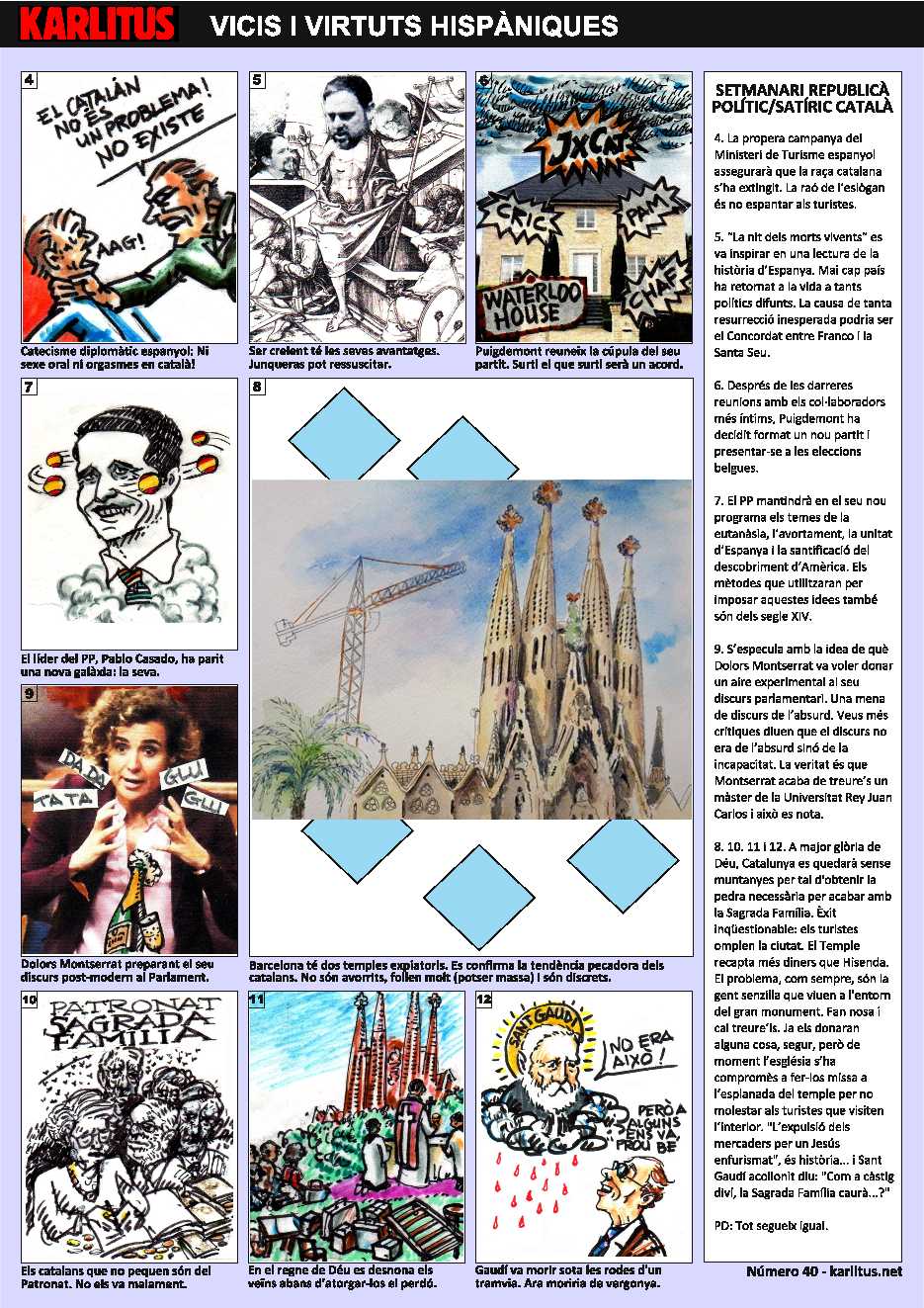 VIGNETTE 1. Text: Latvia. Greece. Belgium. Bulgaria. Finland.
He’s so good at putting his foot in it you’ll know at once who it is. When you think that the current Foreign Minister, Josep Borrell, was President of the European Parliament, it should come as no surprise that Europe is as it is. And even less of a surprise that Spain is as it is. And even less of less of a surprise that Catalonia is as it is. [Note: Abengoa S.A. is a Spanish multinational corporation, which includes companies in the domains of energy, telecommunications, transportation, and the environment. A member of the Spanish Socialist Workers' Party (PSOE), Josep Borrell, an ex-Minister of Public Works in the Spanish Government and an ex-President of the European Parliament, was also a director of Abengoa, and was forced to resign in 2012 as president of the European University Institute (EUI) in Florence in the face of allegations of a conflict of interest after failing to declare he was a board member of Abengoa and was being paid paid €300,000 a year. In 2015 he was suspected of having used insider information to sell shares in Abengoa held by his ex-wife for a favourable price. In 2016 he was investigated for fraud with other directors of Abengoa, but never charged. The Spanish state has been busy forcing the resignation of consuls of various countries suspected of being pro-Catalan. Borrell in October 2018 forced the resignation of the Greek consul in Barcelona who had been seen by police wearing a T-shirt with a Catalan independence flag].
1.- International diplomacy raises questions about its Spanish colleague J. Borrell. You might think it would be logical for them to rebuke him for his undiplomatic handling of foreign affairs, and his manner of thwarting all Catalonia’s aspirations. But you’d be wrong.

VIGNETTE 2. Text: A Royal Family Get-together.
The king of Saudi Arabia is a big family man. That’s why he often visits family members in the prisons where he has had them locked up.
2.- Diplomats have nothing against butchers if they don’t look like butchers. But Borrell's colleagues are disconcerted by him because he doesn’t hide it and doesn’t mind looking like one.
[Note: Borrell has not stopped arms sales by Spanish arms manufacturers to Saudi Arabia in the wake of the scandal of the Saudi journalist murdered in the Saudi consulate in Istanbul]

VIGNETTE 3.
In this image of cultural rapprochement, Western leaders honour the Saudi King. It's like a modern nativity scene.
3.- Diplomacy is all about protocol and etiquette, without being too concerned about the blood of the victims. A job well done is what is valued most of all, especially when the butcher owns all the oil wells.

VIGNETTE 4. Text: Catalan is not a problem. It doesn’t exist!
Spanish diplomatic catechism: No oral sex or orgasms in Catalan!
4.- The next publicity campaign by the Spanish Ministry of Tourism will confirm that the Catalan race is extinct. This is in order not to scare the tourists. [Note: The anti-independence parties claim that the existence of a Catalan independence movement is driving away tourists, although there is no evidence of this at all].

VIGNETTE 5.
Being a believer has its advantages. Junqueras may be resurrected.
5.- The film "THE NIGHT OF THE LIVING DEAD" was inspired by the history of Spain. No single country has brought so many dead politicians back to life. The reason for these unexpected resurrections could be the Concordat between Franco and the Holy See.

VIGNETTE 6.
Puigdemont calls together the big guns of his party. Whatever happens, there’ll be an agreement.
6.- After the latest meetings with his closest collaborators, Puigdemont has decided to form a new party and take part in the Belgian elections.

VIGNETTE 7.
The leader of the PP, Pablo Casado, has created an alternative reality for himself, where he is the centre of a new galaxy.
7.- In its new manifesto the PP includes favourite policies such as its objection to euthanasia and abortion, and its religious commitment to the unity of Spain and the sacred act which was the discovery of America. The methods they will use to impose these ideas are also retrograde, from the fourteenth century. [Note: The leader of the PP gave a curious ultra-nationalist reinterpretation of the invasion of the Americas and the genocide of its inhabitants by Castile, and called it one of the greatest achievement of humanity].

VIGNETTE 8.
Barcelona has two churches where expiation as well as devotion are fundamental. This confirms that the Catalans are sinful at heart. They aren’t boring, they indulge a lot in sex, maybe rather too much, and they are discreet.

VIGNETTE 9.
Dolors Montserrat preparing her post-modern speech in the Spanish Parliament.
9.- It would seem that Dolors Montserrat wanted to create a new genre for parliamentary speeches and explore a style inspired by absurdity. However, some critics say that the speech was not meant to be absurd – it was a result of her overwhelming incompetence. The truth is that Dolors Montserrat has just been awarded a Master's degree from the Juan Carlos I University. [Note: The spokesperson for the PP in the Spanish parliament, in a question session with the Socialist vice-president, intending to attack The Socialist Party, for reasons as yet unknown gave a rambling nonsensical speech on the 16 October 2018. The Juan Carlos I University in Madrid has been involved in recent scandals for awarding master’s degrees to politicians who have not attended classes there or submitted any theses].

VIGNETTE 10. Text: The Sagrada Familia Trust.
The Catalans who are not sinners are on the Board of Trustees. They’re not doing badly at all.

VIGNETTE 11.
In the kingdom of God the people are evicted before being pardoned.

8. 10. 11. 12.- For the glory of God, Catalonia will run out of mountains in order to get enough stone to finish the Sagrada Familia. It’s been a resounding success: The city is clogged up with tourists. The Sagrada Familia gets more money than the government Tax Office. The problem, as always, is the idiots who happen to live next to the great monument. They’re a nuisance and so we need to get rid of them. They’ll probably get something for being kicked out but for the moment the Church has promised to hold a mass outside the main entrance so as not to to disturb the tourists wandering about inside. The eviction has its parallels in the expulsion of the merchants by an angry Jesus. A terrified Saint Gaudí asks, “Will my great work be cast down to the ground as a divine punishment?”