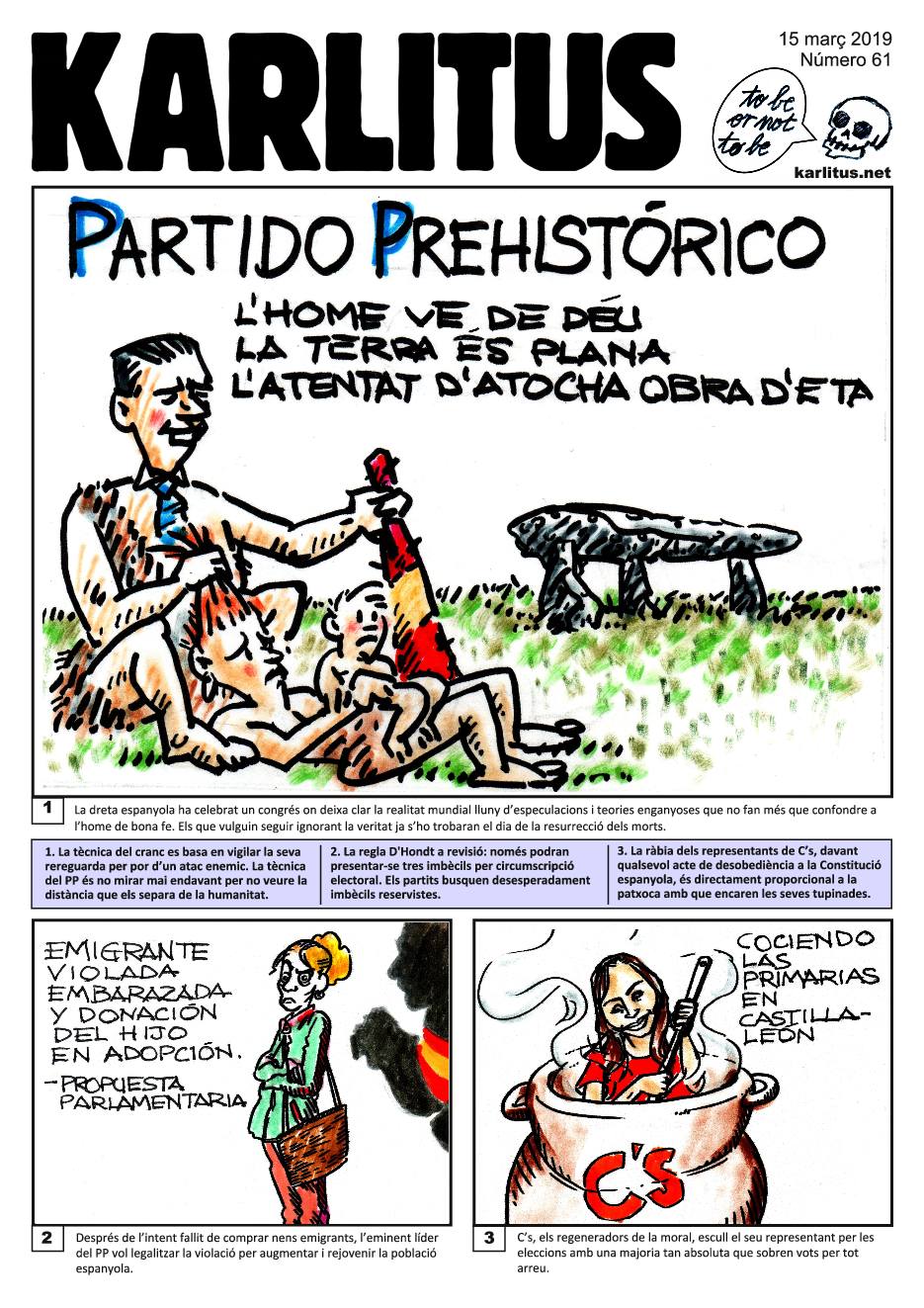 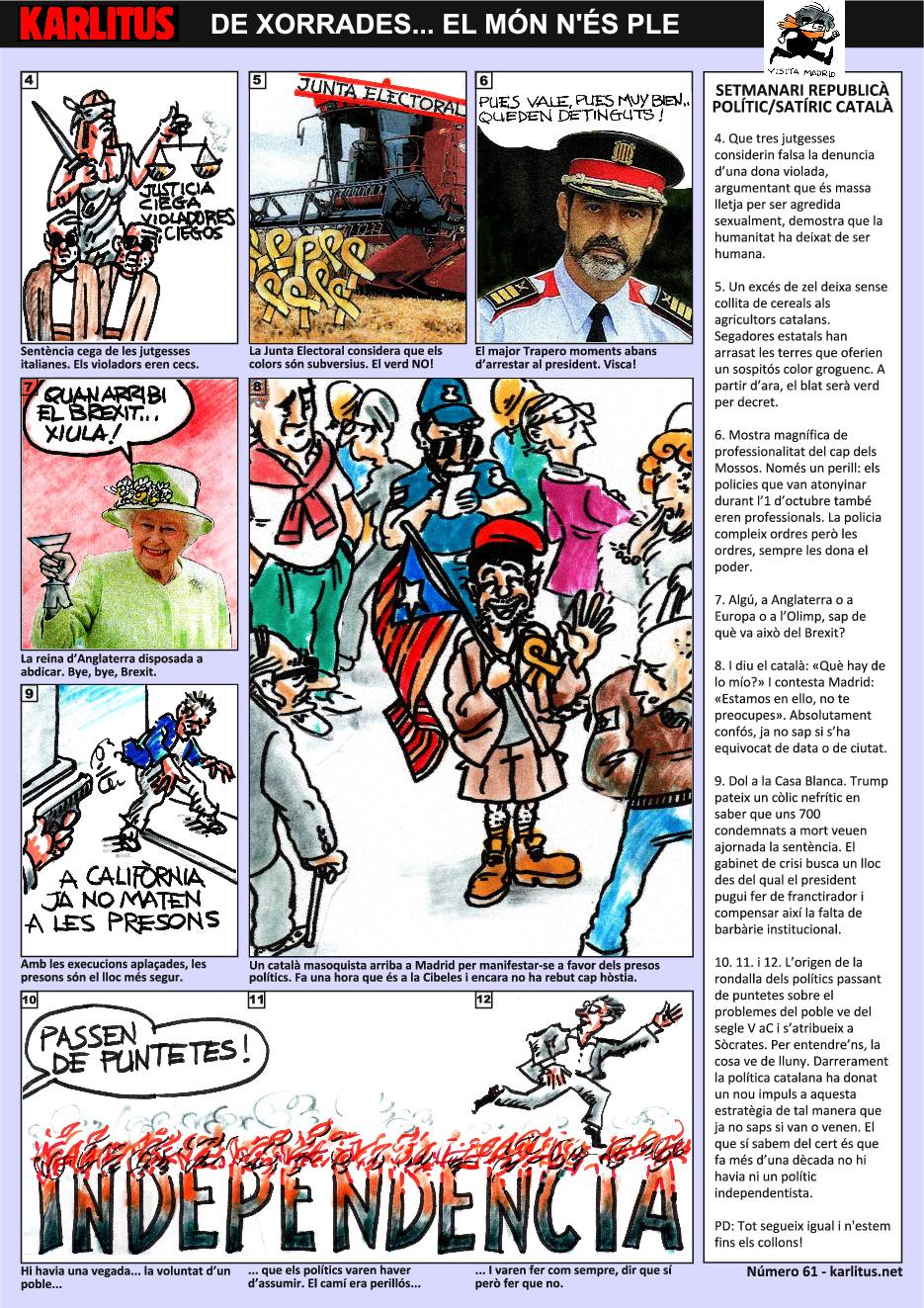 VIGNETTE 1. Text: A prehistoric political party. Man was created by God. The Earth is Flat. The Atocha bombing was carried out by ETA. [Note: On 11 March 2004, commuter trains at the station were subjected to coordinated bombings by Muslim jihadists, killing 191 people and wounding 1,800. The PP insisted that the Basque armed group ETA were the perpetrators of the atrocity.]
The Spanish right has held a congress where they have pontificated on the present state of the world, without questioning the status quo or debating any ideas of what might be done to act in the interest of the voters – such talk only serves to confuse the common folk. Those who wish to continue ignoring the truth will do so until Doomsday and the Resurrection.

VIGNETTE 2. Text: Immigrant women who have been raped and who are pregnant should not have abortions but have the child and give it up for adoption. A proposal put forward in the Spanish parliament.

Since the attempt to buy migrant children has been a failure, the eminent leader of the PP now wants to legalize rape to increase and rejuvenate the Spanish population.

2.- D’Hondt under review. Only three candidates may stand in any parliamentary constituency, and they must be imbeciles. The parties’ choice of candidates is made infinitely easier.
[Note: (Wikipedia) The D'Hondt method or the Jefferson method is a method of highest averages for allocating seats and is thus a type of party-list proportional representation. The method described is named in the United States after Thomas Jefferson, who introduced the method for proportional allocation of seats in the United States House of Representatives in 1791, and in Europe after Belgian mathematician Victor D'Hondt, who described it in 1878 for proportional allocation of parliamentary seats to the parties].

VIGNETTE 3. Text: Cooking up a list of candidates in Castella-León.

The Citizens’ Party, who vaunt that they are the regenerators of morality, chooses its candidate for the general election with such an absolute majority that there are more votes than people who voted.

3.- The rage of the representatives of C's, when they suspect any act of disobedience against the Spanish Constitution, is directly proportional to their haughty indifference when their innate dishonesty is yet again exposed.

A blind sentence by Italian judges. The rapists were blind.

4.- Three judges dismiss as false the claim of a woman that she had been raped arguing that she is too ugly for anyone to want to assault her sexually. Another courtroom where humanity has ceased to be human.

5.- An excess of zeal by the Commission means that no cereal crops can be planted by Catalan farmers. Spanish government bulldozers have destroyed standing corn after it began to change colour, from green to yellowish. Wheat can only be harvested if it is green, according to a new decree.


VIGNETTE 6. Speech bubble: All right then, just as you like. Now you’re under arrest.

The police chief Trapero informs President Puigdemont that he’s under arrest and it’s off to prison with him.
[Note: the police chief made a remark in 2017 to a Spanish journalist who protested that Catalan was being used in a press conference. His remark was his reaction when, to his surprise, the journalist angrily announced that he was leaving the press conference because it wasn’t 100% in Spanish. It then became a slogan on T-shirts].

6.- A magnificent example of the professionalism of the Chief of the Catalan Police. However, there’s just one small point. The police who went around beating up voters in the 1 October 2017 referendum were also professionals. The police follow orders, but they are always the orders of the powers that be.

The Queen of England is willing to abdicate in favour of her son. Bye, bye, Brexit.

7.- In there anyone in England or in Europe or on Mount Olympus who knows what Brexit is all about?

Catalan masochists arrive in Madrid to express support for the political prisoners. They’ve been in Plaza de Cibeles for almost an hour and the police still haven’t started beating them up.

8.- And the Catalans say: What's happening? Why aren’t phalanxes of police marching towards us with batons raised? This greatly confuses the Catalans. Have we come to the wrong city? Have we come on the wrong date? Madrid replies: We’d really like to break up your demonstration violently. But we can’t. All our police and paramilitaries are in Catalonia.

VIGNETTE 9. Text: In California they no longer execute prisoners.

Now that the executions have been postponed sine die, Californian prisons are the safest place to be.

9. - The White House is in mourning. Trump has a fit when he learns that seven hundred prisoners sentenced to death have had their execution postponed. His crisis committee is searching for vantage points where the President, as a sniper, can pick off the prisoners and make up for the lack of institutional barbarism.

Once upon a time, the politicians had to represent the will of the people...

...The path was perilous but the politicians knew if they didn’t do what they’d been elected to do could mean losing their job...
...And then they discovered that there was a way out of this dilemma – they could make promises, and then forget them altogether.


10 11 12.- The origin of the story of politicians ignoring the people's problems is to be found in the fifth century BC and is attributed to Socrates. The problem comes from a long way back. Lately, Catalan politicians have adopted the tactic with enthusiasm and nobody knows whether they are coming or going. What we do know, though, is that just one decade ago there was not a single a pro-independence politician.

PS. Everything remains the same and we’re fed up to the back teeth with it all!