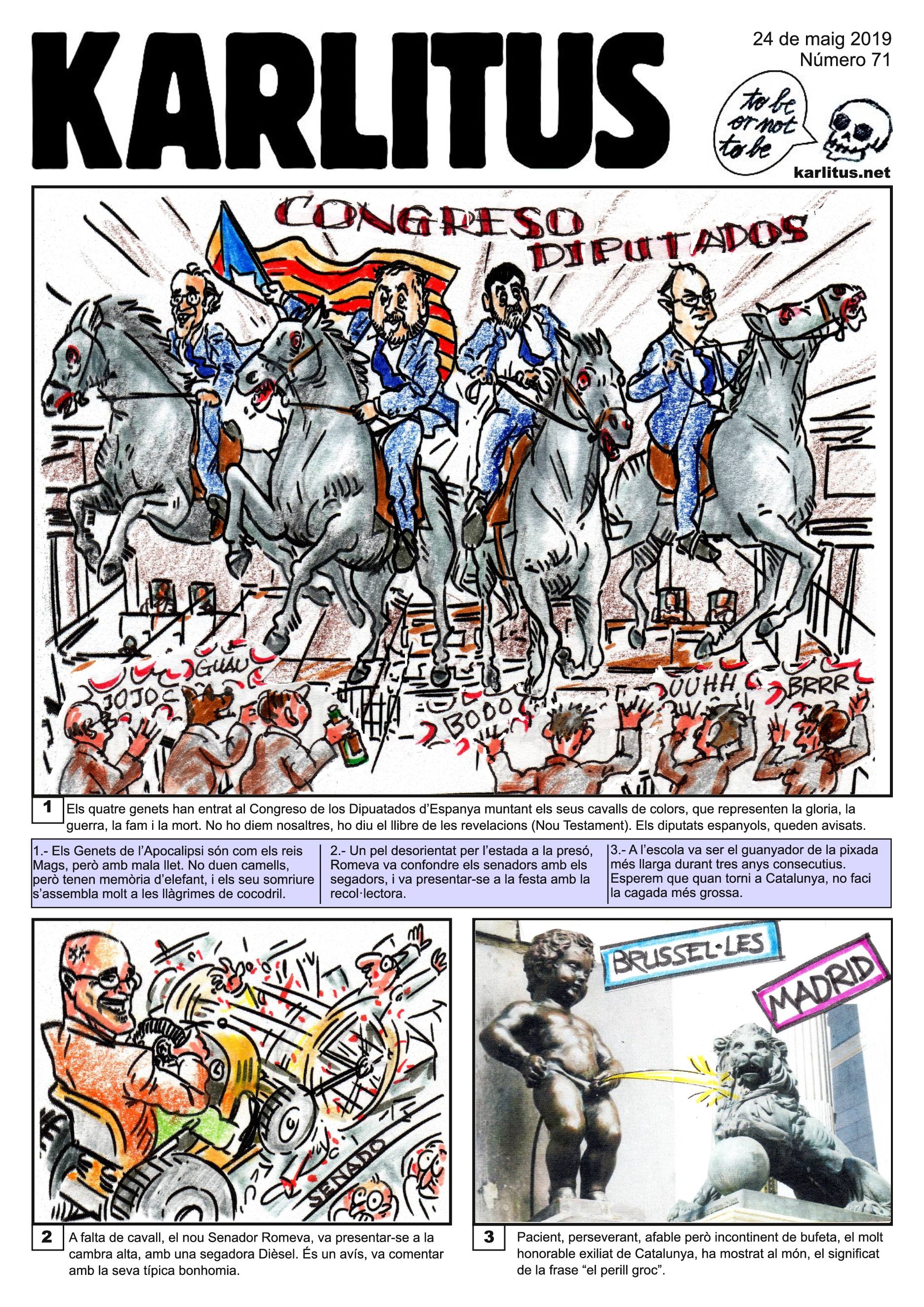 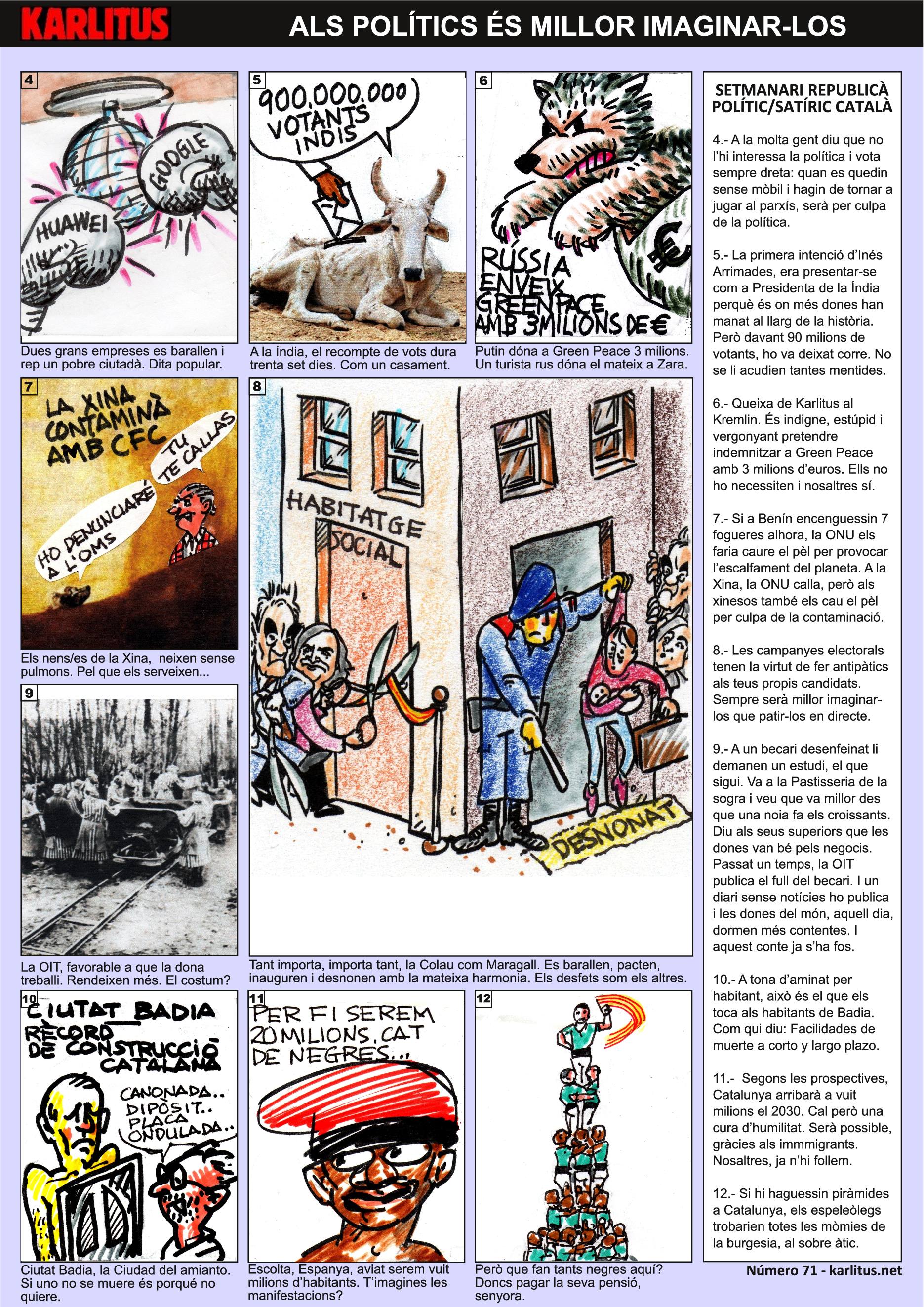 The four horsemen of the Apocalypse have entered the parliament on their horses representing Glory, War, Famine, and Death. [Note: Four Catalan political prisoners have been elected as members of parliament]. It’s not us that say this, but the Book of Revelations in the New Testament. Spanish Members of Parliament - you have been warned.


1.- The Horsemen of the Apocalypse are like the Three Wise Men but don’t pretend to be nice. They don’t have camels, but they have an elephant’s memory, and their smiles are stern. They understand the hostile reception given them.

Lacking a horse, the new Senator Romeva turned up at the Upper House, the Senate, on a diesel mower. It's a warning, he commented with his usual bonhomie.


2.- Somewhat disoriented from his long custody in prison, Romeva confused the senators with the reapers, and appeared at the party with a mechanical harvester. [Note: The Reapers is the national anthem of Catalonia]

Patient, persevering, and affable, but with a bursting bladder, the Most Honorable exile from Catalonia [Note: the exiled Catalan President Carles Puigdemont] has shown the world the meaning of the phrase "Yellow Peril". [Note: Yellow represents the movement for the freedom of the Catalan political prisoners].


3.- At school, for three years running, he won the competition for the longest piss. We hope that when he returns to Catalonia he has enough urine to piss on all the Francoist judges in the Spanish justice system.

Two big companies will fight and destroy each other to get customers. A popular saying.


4.- Many people say that they are not interested in politics and for this reason they always vote for right-wing parties. When they have no mobile phones any more and have to go back to playing cards to amuse themselves, they’ll blame it all on politics.

In India, the election count goes on for 37 days. Like a wedding.


5.- Inés Arrimades’s first intention was to stand for election for President of India because it is where more women have been leaders of the country throughout history. But with 900 million voters, she found it wasn’t possible – she couldn’t come up with enough lies for so many people [Note: the leader of the Citizens’ Party in the Parliament of Catalonia is known for her disregard for the truth].

A Russian tourist spends the same in Zara in one afternoon [Note: Zara - a clothing boutique for the rich].


6.- A complaint by Karlitus to the Kremlin. It is foolish, shameful and downright wrong to indemnify Green Peace with 3 million dollars. They do not need it and we do. [Note : Russia has pledged to pay this amount to Greenpeace in compensation for the unlawful detention in 2013 of its Dutch-registered ship Arctic Sunrise and 30 crew-members, following an agreement reached between Russia and the Netherlands.]

VIGNETTE 7. Text: China pollutes with CFC. Speech bubble: -I’ll report you to the World Heath Organisation. -Shut up, you.

Children in China are born without lungs.
They are of little use to them as breathing the air there is impossible.


7.- If in Benin they were to light 7 bonfires at the same time, the UN would be horrified and would lecture them on causing global warming. In China, the UN keeps quiet, though the pollution caused by the Chinese is probably rather more than the damage the Beninese could ever cause.

VIGNETTE 8. Text: Social housing.
Colau and Maragall are much the same thing. They quarrel, pact, inaugurate, and evict, neither more nor less than the other. The ones who feel the consequences are the others.

8.- The election campaigns have the virtue of making your own candidates unlikeable. It’s always better to imagine what they could be like than to put up with them in person.

The ILO [Note: The International Labour Organisation is a United Nations agency whose mandate is to advance social justice and promote decent work by setting international labour standards (wikipedia)] is in favour of women working. They are more profitable. It's customary.


9.- A work-experience student is asked to do a study on whatever he likes. He goes to his mother-in-law’s Cake Shop and sees that things are going a lot better since a girl has been taken on to make the croissants. He writes that employing women is good for business. After a while, the ILO publishes the student’s report. A newspaper hard up for news publishes it and the women of the world, on that day, sleep more contentedly. And that’s the end of the tale.

VIGNETTE 10. Text: A Catalan Building Record. Speech bubble: Piping, tanks, a corrugated sheet...
Ciutat Badia is Asbestos City. If you don't die it's because you don't want to. [Note: Now officially called Badia del Vallès, Ciutat Badia is a built-up area planned under the Francoist regime in the 1960s on the outskirts of Barcelona and noted for its poor construction].
10.- The municipality with the highest rate of tons of asbestos per citizen. Maintenance and reconstruction are always high-cost. What should be done? Nothing. Funeral expenses are a lot cheaper.

Listen, Spain, right now we’re heading for 8 million. If this rate of increase continues, can you imagine the size of future demonstrations?

11.- According to the foresight, Catalonia will reach eight million on 2030. But a cure of humility will be necessary. The immigrants will give it possible. We don’t already fuck.

VIGNETTE 12.
Why are there so may black people here? Well, they're the people paying for your pension.

12.- If there were pyramids in Catalonia the investigators would find all the mummies of the bourgeoisie in the penthouse suite.