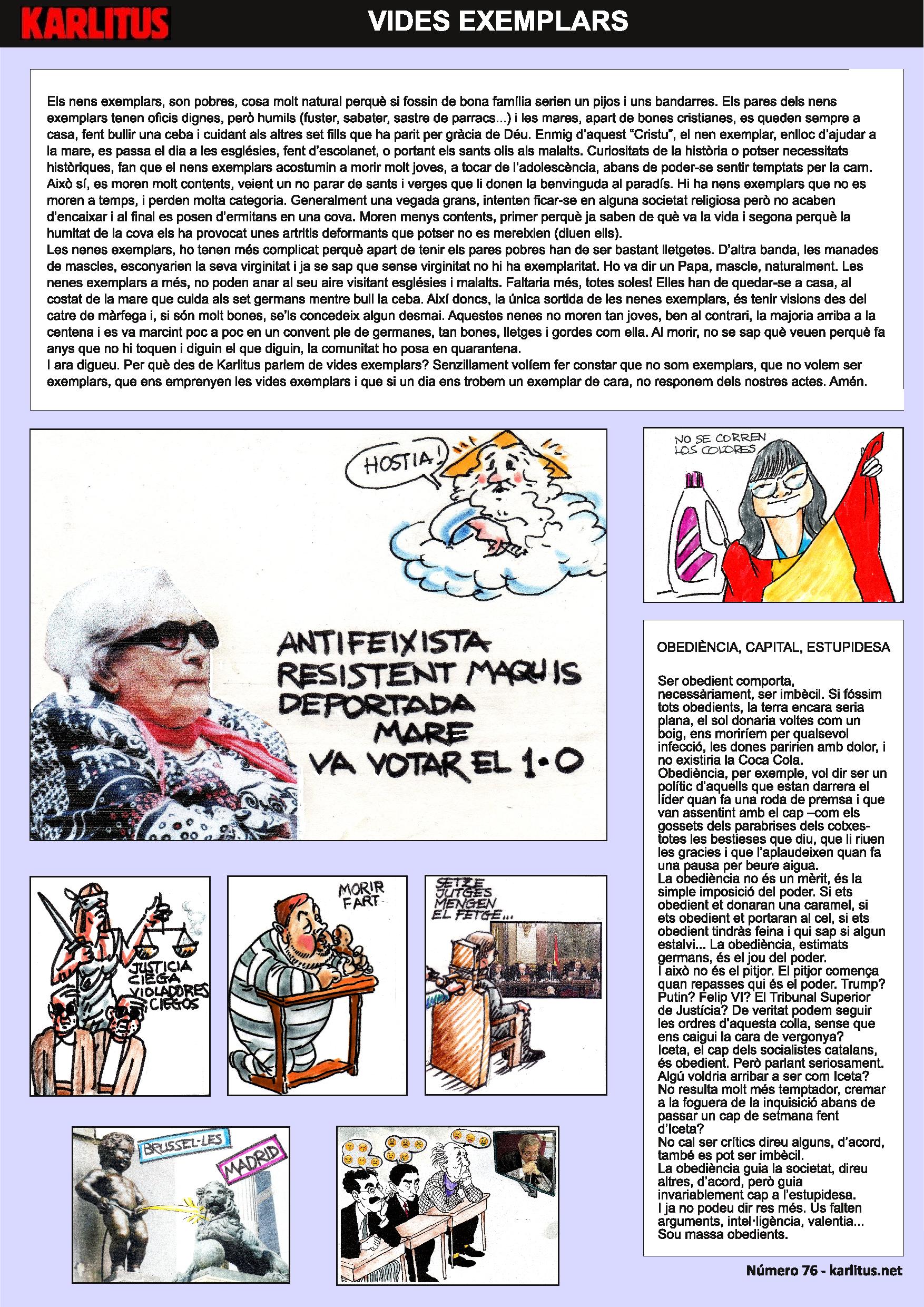 An interview with Paulino Porras Armas. Agent Number 56yj78893ccc. in the paramilitary Civil Guard.
K. - They say that you have three medals for good behaviour.
GC.- Yes, that’s right. And I had a gold star at my Catholic secondary school in Cádiz for good manners.
K.- It would seem that you believe in discipline.
GC.- Not exactly discipline, but obedience. Obedience is the key word. Without obedience the world would be in a terrible mess. People would think for themselves. No, if somebody tells you to do something, then you do it, and you do it as best you can.
K. – But maybe they order you to do something bad.
G.C.- No, that’s impossible. Our superiors always order us to do good things.
K.- Where on earth did you get that idea from?
G.C. The sergeant in the paramilitary barracks where we all the family lived. I scratched my testicles as the Spanish flag was being raised and he gave me such a wallop that I went flying into the wall and bounced off it. I was only two years old at the time and until I was seven I couldn’t eat solid food. It took five years to repair my jaw.
K.- What did your father say to all this?
GC.- He thanked the sergeant! My father picked me up off the ground by my feet and took me to the torture cell in case the authorities wanted to educate me a bit more.
K.- And for you that’s the right thing to do?
GC.- Well, at least I didn’t scratch my balls again.
K.- You were in the deployment of paramilitaries in Catalonia (to attack the referendum voters)...
GC.- Indeed, but I arrived a bit late because if I go by ship I get seasick. I had to go there by train, on the midnight mail.
K.- What do you think of Catalonia?
GC.- It’s a shit-hole, even little infants who can’t talk yet know that. Catalonia is two things – excrement and hate. They’re evil people, the Catalans. But the Fatherland called on us to act, and so we went there.
K.- Did you have a hard time there?
GC.- No, not at all, We had everything. Good commanders, a good plan of operations, good coordination, and we all synchronized our watches. Perfect. I’ve never worked to save Spain with so much satisfaction.
K.- Would you go back there?
GC. Well, no, I wouldn’t, because after risking our lives in the middle of the out-of-control mobs they didn’t give us a single medal with pension attached, and that’s unfair, because by law we’re supposed to get one.
K. – Maybe, Paulino, your love for total obedience is misplaced...
GC.- Obedience depends on your position in society. I have already told you that the world is very complicated. But do as your masters tell you and ask no questions, and everything is so much simpler…

Exemplary children are poor, and naturally so because if they were from a good family they would be spoilt rich kids and delinquents. The parents of exemplary children have proper jobs, but lowly ones, such as carpenters, shoemakers, tailors... and the mothers, good Christians all, are always at home, boiling an onion for dinner and caring for the other seven children that they have given birth to by the grace of God. The exemplary child, instead of helping the mother in the home, spends the day more profitably in church, learning ecclesiastical ways, and bringing holy oils to the sick. History shows us that curiously, and most fortunately, exemplary children usually die very young, before adolescence, and so are not tempted by the flesh.
They die very happy though, and get to see, before most of their contemporaries, vast crowds of saints and blessed virgins who welcome them to paradise. There are exemplary children who do not die in time, and this blights their lives. On becoming adults they try to find a place for themselves in some religious order or other but they never fit in and almost always end up as hermits in some damp cave. They die discontented, firstly because they have seen that life is non-stop suffering and there’s no joy in living at all, and secondly because the humidity of the cave invariably causes them to become deformed with arthritis - and they claim it’s something they didn’t deserve at all.
It’s more complicated for exemplary girls because, apart from having parents who are poor, they are in general exceedingly ugly.
On the other hand, the males become less virginal and, as we know, without virginity there one cannot be exemplary. A pope said this, and he was a man, so of course he would know.
Exemplary girls, though, cannot go about visiting different churches and sick people. Good heavens, walking about all alone? No, they have to stay home with the mother who cares for her seven brothers while cooking the aforementioned onion. So, the only way out for exemplary girls is to have visions of Virgin Marys and, if the vision is particularly good, they are allowed to drop to the ground in a faint. These exemplary girls do not die so young. On the contrary, most live beyond a hundred, gradually fading into noting in a convent full of nuns as good, fat and ugly as they themselves are. On dying, one does not know what they see because for years, however the convent may deny it, they have been placed in quarantine.
Why is Karlitus talking about exemplary lives? We just wanted to show that none of us is exemplary, we do not want to be exemplary, that exemplary lives annoy us intensely and if we come face to face with an exemplary individual one fine day we shan’t be responsible for our actions. Amen.

OBEDIENCE, CAPITAL, IMBECILITY.
Being obedient means of necessity being an imbecile. If we were all obedient, the earth would still be flat, the sun would be revolving round the Earth like crazy, we would all be dying of the slightest infection, women would be giving birth in excruciating pain, and there’d be no Coca Cola.
Obedience, for example, means being a politician like those who stand behind the leader when he or she holds a press conference and who agree nodding their heads - like those nodding dog car toys – they laugh at all their stale jokes and clap enthusiastically when they masters pause to have a rink of water.
Obedience is not a merit, it is the simple imposition of power. If you are obedient they will give you a sweet, if you are obedient you’ll go to heaven, if you are obedient you will have a job and a regular wage... Obedience, dear brothers, is the yoke the powerful have put us under.
And that’s not the worst thing. The worst part begins when you look at who the powerful are. Trump? Putin? Felipe VI? The High Court of Justice? Can we really follow the orders of this troupe of ne'er-do-wells without being utterly ashamed?
Iceta, the head of the Catalan Socialists, is obedient. But let’s be serious. Does anyone want to be like Iceta? It’s a lot more tempting to be burnt on a bonfire by the Spanish Inquisition than to spend a weekend being Iceta.
There’s no need to criticise, some will say. All right. But if you stop criticising you have only one alternative - being an idiotic.
Obedience guides society, others will say. Well, yes, but it invariably guides it in the direction of stupidity.
How do you know if you’ve caught this disease? Because you don’t speak out. You’re unable to argue a point, you lack intelligence courage... you are obedient.