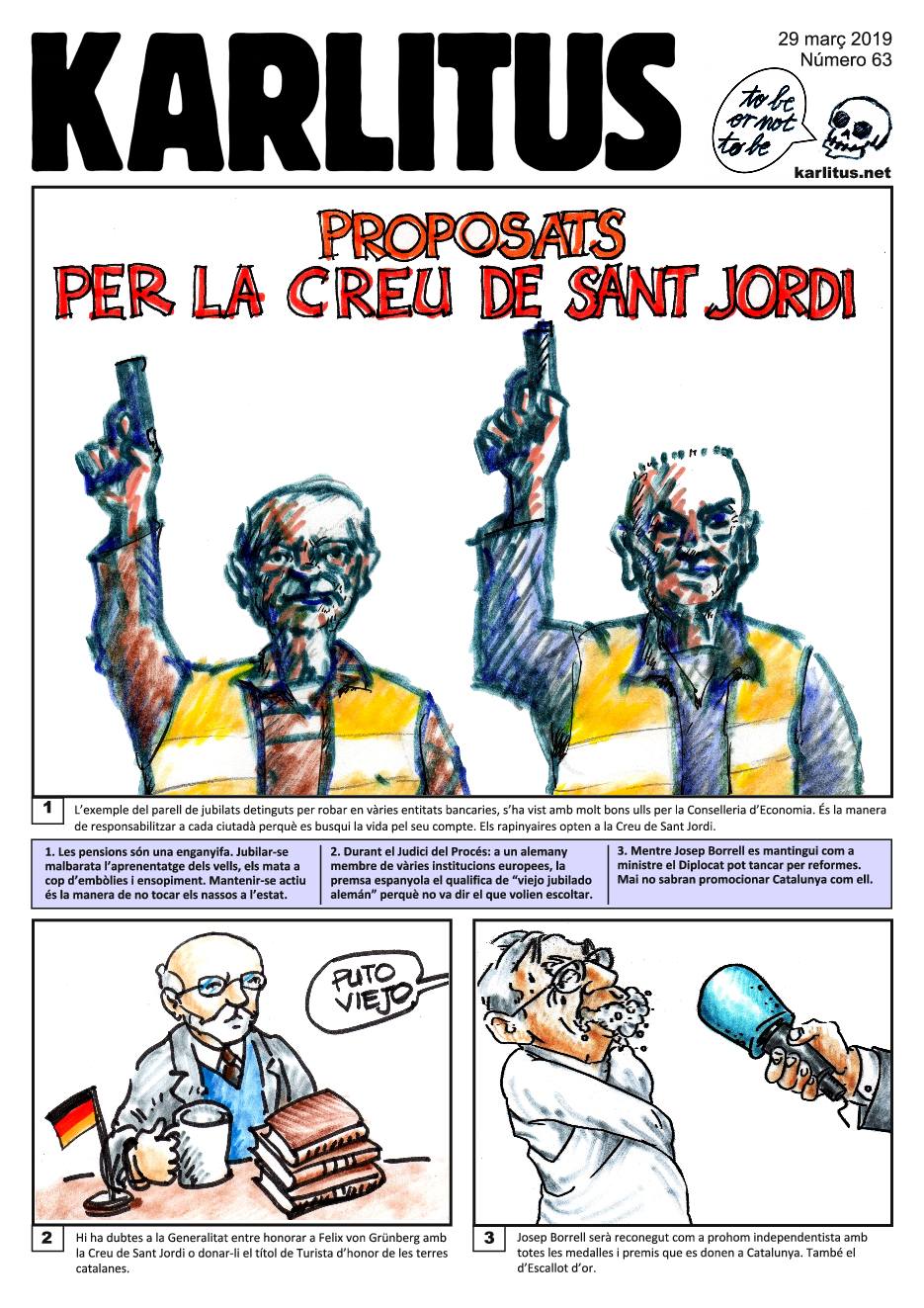 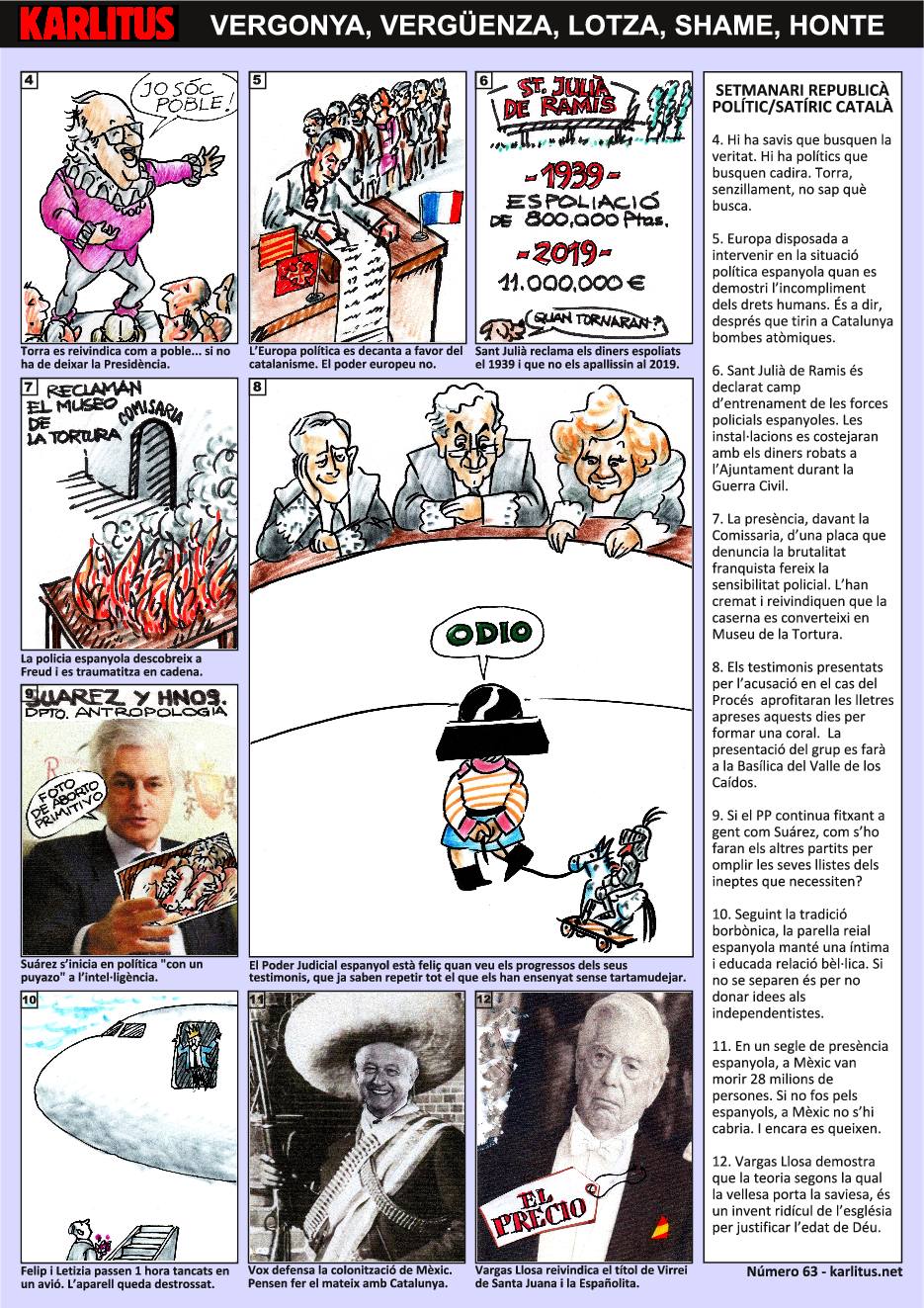 VIGNETTE 1. Text: Nominated for the Cross of Sant Jordi [Note: an award by the Catalan Government for worthy contributions to the well-being of Catalan society].

The example of the couple of pensioners arrested for robbing banks has been well received by the Ministry of Economy. It is a good example of every citizen being responsible for supporting himself or herself without state handouts.

1.- Pensions are a vile trick. Retirement is a waste of the knowledge and experience of old folk. It kills them off with strokes, heart attacks and apathy. Making people stay active and not letting them retire is the only way that they’ll not bother the state with their needs.

There are doubts in the Generalitat about whether to honour Felix von Grünberg with the Cross of Saint George or with the title of Honoured Tourist of the Land of Catalonia. [Note: the historic leader of the German Social Democratic Party (SPD) Felix von Grünberg (73) expressed his shock, in statements to the German media, after testifying before the Supreme Court in the trial of the Catalan political prisoners, at how Spanish justice works. He was been outraged because the far-right Vox party is allowed to participate as a private prosecution, which would be absolutely impossible in Germany. Some commentators on the trial in the Spanish press called his comments worthless, and described them as the views of an ‘old pensioner’]
2.- During the trial of the pro-independence politicians and activists, the Spanish press described the German ex-MP, a member of several European institutions, as an "old German pensioner" because he did not say what they wanted to hear. On the other hand, the anti-independence witnesses who day in day out tell lies on oath in the trial are treated with respect in the Spanish press because they say what the anti-independence newspapers, radio and TV want to hear.

Borrell will be recognized as pro-independence hero and awarded all the medals and titles on offer in Catalonia. But he’ll need to be straight-jacketed for the rest of his life.

3. While Borrell remains as Foreign Minister, Diplocat [Note: a Catalan organisation promoting Catalonian interests abroad] can close its doors for the interim. They will never be able to promote the case for an independent Catalunya as Borrell does malgré lui. [Note: the Foreign Minister, intending to improve Spain’s image in the world, makes it worse than it already is with his gaffes and authoritarian manner].


VIGNETTE 4. Speech bubble: I am the people.

Torra claims to be a just a common man of the people... but not just yet while he’s President.

4.- There are wise men who seek the truth. There are politicians looking for a comfortable job for life. But Torra simply does not know what he is looking for.

Many politicians in Europe support the Catalans. But not the European power structures.

5.- Europe is only willing to intervene in dispute between the Spanish state and the Catalans when they consider that a serious breach of human rights has occurred. That is, after Spain drops atomic bombs on Catalonia.

Sant Julià de Ramis demands the return of money stolen by the Fascist forces in 1939 [Note: End of the War in Spain. and the imposition of the Franco dictatorship], and demand that they are not beaten up in 2019.

6.- Sant Julià de Ramis becomes a training ground for the Spanish police forces. It will be paid for with the money stolen from the Town Council during the Civil War. [In the attack on the polling stations by the Spanish security forces during the October 1 2017 referendum, the Spanish paramilitaries were particularly violent].

VIGNETTE 7. Text: Police Station. We want a Museum of Torture.

The Spanish police discover Freud and are all traumatized in one fell swoop.

7.- The presence, in front of the Police Station belonging to the Spanish Police, of an information panel that denounces Francoist brutality hurts the feelings of the Spanish police. They set fire to it a day after it was unveiled and demand that the police station becomes a Museum of Torture – to glorify the practice of torture. [Note: Barcelona City Council put up an information panel which explains that the police station was a centre of torture under the dictatorship and in the years following it. It was set alight that same night by persons unknown, though in full view of one of the most vigilated places in Catalonia].


VIGNETTE 8. Speech bubble: Hatred.
The Spanish judges are happy with the testimony of the anti-independence witnesses who are able to repeat, without making any mistakes, all they have been told to memorise from the score sheets they’ve been issued with.
8.- The witnesses who the prosecution have called into court in the trial against the pro-independence politicians and activists have been singing like a practised choir. Now they’re all set for their grand performance in the Basílica of the Valley of the Fallen. [Note: the mausoleum of the Spanish dictator Franco].

9.- If the PP continues to name people like Suárez as candidates, where will the other parties find other useless and inept candidates to fill up their lists? [Note: In a fit of Spanish patriotic fervour, the PP makes Suarez number two on its list of candidates – unknown for any personal merits, but an outspoken anti-abortionist and a fanatical proponent of bullfighting – and son of a minister in the Franco regime, Adolfo Suárez González, 1st Duke of Suárez].

Felip VI and Letizia spend an hour cooped up together in a plane. The plane ends up completely destroyed.

10.- According to Bourbonic tradition the royal couple have a simmering relationship of deep hatred for one another. The reason that they don’t split up is that it might give Catalan independence supporters the impression that unions are not for ever, and they have have a right to break away from Spain.

Vox defends the colonisation of Mexico. It’s the same plan that they have for Catalonia.

11.- In one century under Spanish rule 28,000,000 died in what is now Mexico. Thanks to the Spaniards, a problem of overcrowding was solved. And yet the Mexicans still have the temerity to complain.

Vargas Llosa claims the title of Viceroy of Santa Juana and Españolita.
12.- Vargas Llosa shows that the adage that with old age comes wisdom is a ridiculous invention of the Catholic Church to make their God appear very wise indeed.