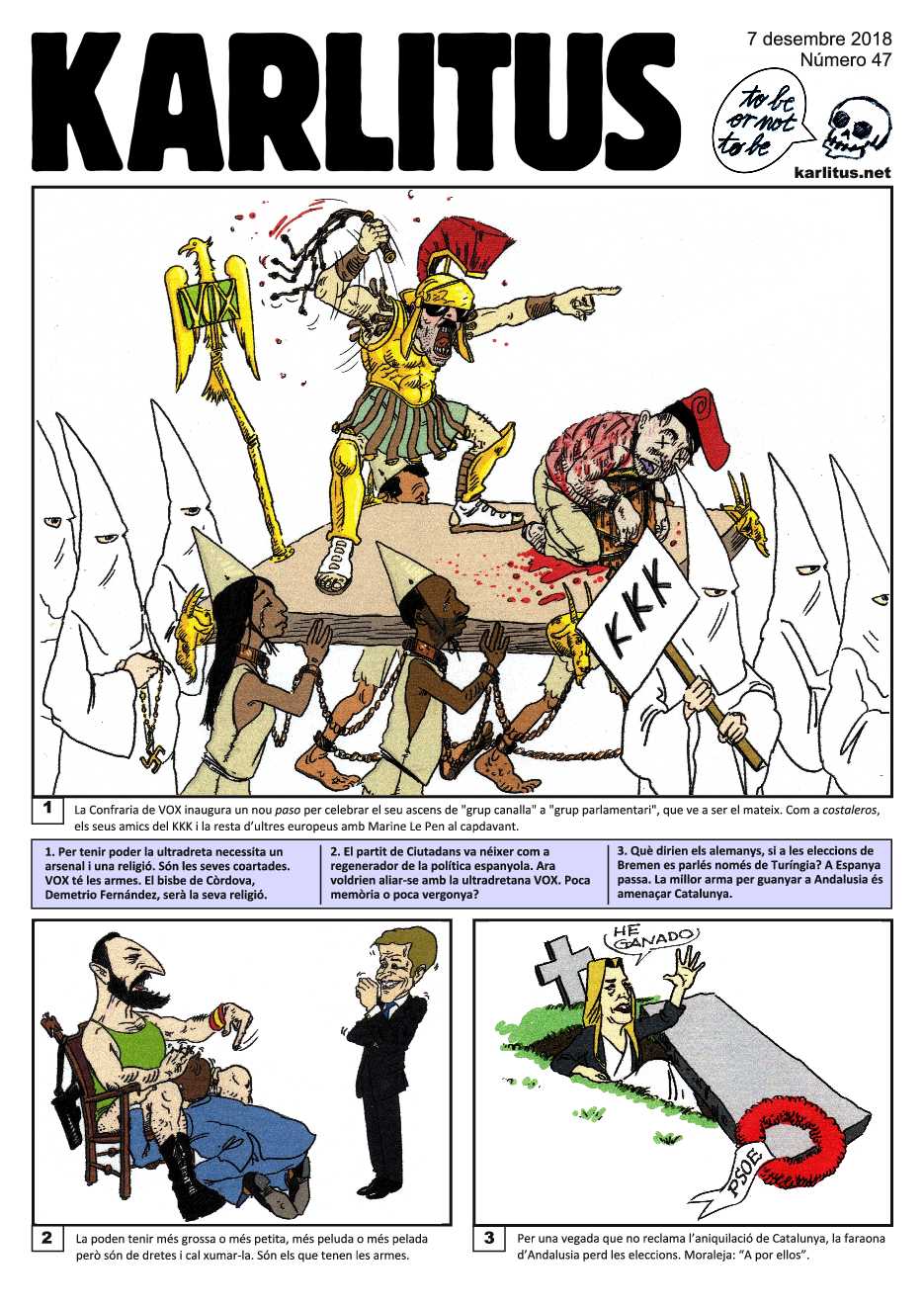 Keywords : Vox. Anne Marie Le Pen. The Bishop of Córdoba. The Citizens’ Party. The Annihilation of Catalonia. Land of Bremen. The Anniversary of the Constitution. Gibraltar and Spain. Imprisoned politicians. Hunger strike
Previous
Next

VIGNETTE 1.
The VOX brotherhood, a group of religious penitents in the Easter religious parade, organises a special procession to celebrate their elevation from right-wing rabble to right-wing parliamentary group, which amounts to the same thing. To accompany them, they have the KKK from America, and representatives of European far-right groups, led by Marine Le Pen. [Note: In the Andalusian elections, the far-right VOX party, previously without parliamentary representation, won 12 seats. They were congratulated by the KKK and the European far-right parties]. [Note: In the Castilian Catholic tradition, penitents, organised into brotherhoods, parade at Easter in hooded robes carrying effigies of Jesus Christ or the Virgin Mary].
1.- In order to gain power the far right needs an arsenal and religion. Without them they’ll get nowhere. VOX has the weapons. And with the bishop of Córdoba, Demetrio Fernández, they now have religion on their side. [Note: this bishop in a diocesan newsletter welcomed the victory of the right-wing parties, including the fascist VOX party, in Andalusia].

VIGNETTE 2.
No matter how big or small their appendages are, and whether there’s hair there or not, it doesn’t matter. This is the far right and they have things that need sucking regardless. That’s because they are the ones with the weapons.
2.- The Citizen’s Party was supposedly created to clean up Spanish politics. Now they want to ally themselves with the fascist VOX party. Is it because they have no recollection of this – or because they have no shame?

VIGNETTE 3. Text: I have won.
The one time she forgets to advocate the annihilation of Catalonia, what happens? The Queen of Andalusia loses the regional elections! “I should have put "Let’s get the bastards" on my election posters!”. [Note: Susana Diaz, the leader of the Socialist Party in Andalusia, which suffered a heavy defeat in the regional elections, decided that her lack of success was because she did not engage in as much Catalonia-bashing as the three right-wing parties. This was more attractive to the voters than any proposals about how to govern Andalucía]. [Note: Prior to the October 1 independence referendum in 2017, units of the paramilitary Civil Guard sent to Catalonia to prevent the referendum from taking place were cheered as they left Huelva and other Spanish cities with shouts of “¡A por ellos!” which is more or less “Let’s get them!” or “Let’s get the bastards!” in English.]
3.- What would the Germans say if in the regional elections in Bremen the parties spoke only of Thuringia? It would not be seen as normal. In Spain such absurdities are the order of the day. The best ploy in order to win an election in Andalusia is to threaten Catalans and Catalonia.

VIGNETTE 4. Text: 40 years of Franco.
And now 40 years without Franco and nothing’s changed!
4.- Nor even Franco’s most avid fans would call him an example of virility, but looking at the offspring that he produced it might be necessary to challenge this perception of him. In Spain, (and it’s a very conservative estimate), thirty-five percent of Spanish voters are Franco's children. [Note: the three right-wing parties, neo-Francoist in their views whether openly or not, receive ever more support in Spain]

VIGNETTE 5. Text: 40 years of the Spanish Constitution.
The Constitution was vaunted as being the essence of the Transition, but in fact it was a worthless complimentary gift with the purchase of the regime change. [Note: The Transition was supposed to be the smooth transformation of a fascist regime into a western-style democracy]
5.- Very few people have actually read Don Quixote and even fewer have read the Spanish constitution but everybody will tell you that both are magnificent reads. Even if these people were to read the apocryphal Don Quixote, they wouldn’t understand it at all but in spite of that they’d still exalt its virtues and they’d explain excitedly how he tilted at windmills. If they were to be given a pornographic book, this they would read and enjoy it, but would pretend they didn’t like it at all and say it was just crap.

VIGNETTE 6. Text: Ali Baba leaves but the forty thieves stay behind.
Until when will we continue with the story of a thousand and one nights? [Note: Franco died but the corruption of his regime survived in the endemic corruption of the Socialist Party and Popular Party governments in the forty years since his death]
6.- The naivety of the opponents of Franco led them to believe that with the death of the dictator there would be no more injustice, no more thieving, and nor more short-selling, with kilo weights of only seven hundred grams.

VIGNETTE 7.
Foreign Minister Borrell’s tactic to frighten Gibraltar: a Spanish navy boat plays the Spanish State Anthem at full blast as it sails up and down off the Rock of Gibraltar. [Note: The Spanish government is obsessed with taking possession of Gibraltar – which the dictator Franco was never able to do. The Spanish military makes frequent incursions into Gibraltar’s territorial waters presumably to instil fear into the inhabitants of the rock.]
7.- Spain, angry that Gibraltar does not want to be ruled by Castile, has declared war on the UK. And to weaken the morale of Saxon enemy, it sends one of the few navy ships it has that still floats. The vessel is equipped with a radio and amplifier and the cunning plan is to deafen Gibraltar with 24 hours of Spanish Borbonic music. But what will they do when the batteries run out?

VIGNETTE 8. Text: Hunger strike.
Man does not live on bread alone. One cannot live without dignity, freedom, and justice. However, not everyone knows the meaning of these words, especially the Spanish judges. Or vultures, to give them their zoological nomenclature. [Four imprisoned members of the Catalan government are on hunger strike to protest at the illegal actions of Spanish judges in not responding to applications for conditional release pending trial which should be dealt with within a month but have been ignored for more than a year].
8.- For just this once, and without it serving as a precedent, Karlitus leaves aside politics and satire. Four illegally-detained prisoners are on hunger strike.

VIGNETTE 9. Text: Valls, you have to pay for it.
Valls explains to the people of the Raval how they should lead their lives and has to run off to save his skin.
9.- Valls, a political exile from France, bought a guide-book and went to the Raval after his moneyed supporters invited him to dinner to talk about the banks. But he found himself in hostile where nobody wanted to listen to his politicking. What’s more, the prostitutes will never vote. Here’s a word of advice to Monsieur Valls – You’re riding for a fall. [Note: Manuel Valls, an ex-socialist, after the failure of his political career in France, is seeking to become the next mayor of Barcelona with the help of the Citizens’ Party – but although he was born in the city, he doesn’t really know it].

VIGNETTE 10.
In France... the cobblestones send a message to French politicians.

VIGNETTE 11.
Sometimes "grandeur" means donning a fluorescent yellow jacket, and going out into the street. [Note: French protestors against the Macron government wear yellow jackets in the demonstrations]

VIGNETTE 12.
The President is rather busy, and is unable to leave the meeting room.

10. 11. 12.- The Romanian dictator Ceauşescu went one day to the balcony and for the first time in life felt somewhat bewildered. The serfs down in the square, instead of thanking him for the misery in which they lived, shouted with rage and then killed him. This should serve as a warning to all politicians - one day the common herd will refuse to eat wet straw while waiting to go into the slaughterhouse. Omnipotent leaders in particular be warned, or you too will have a Ceauşescu moment.