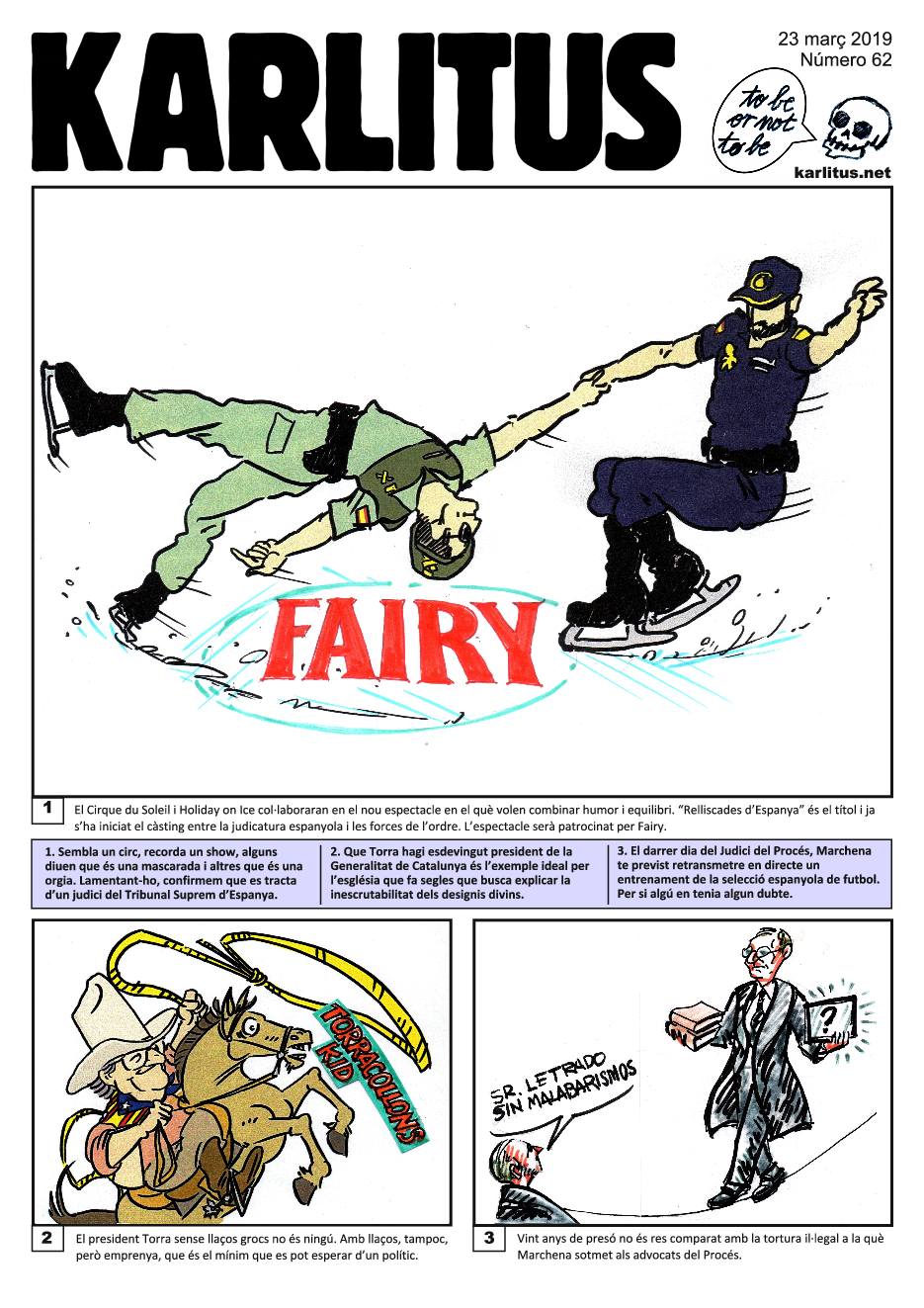 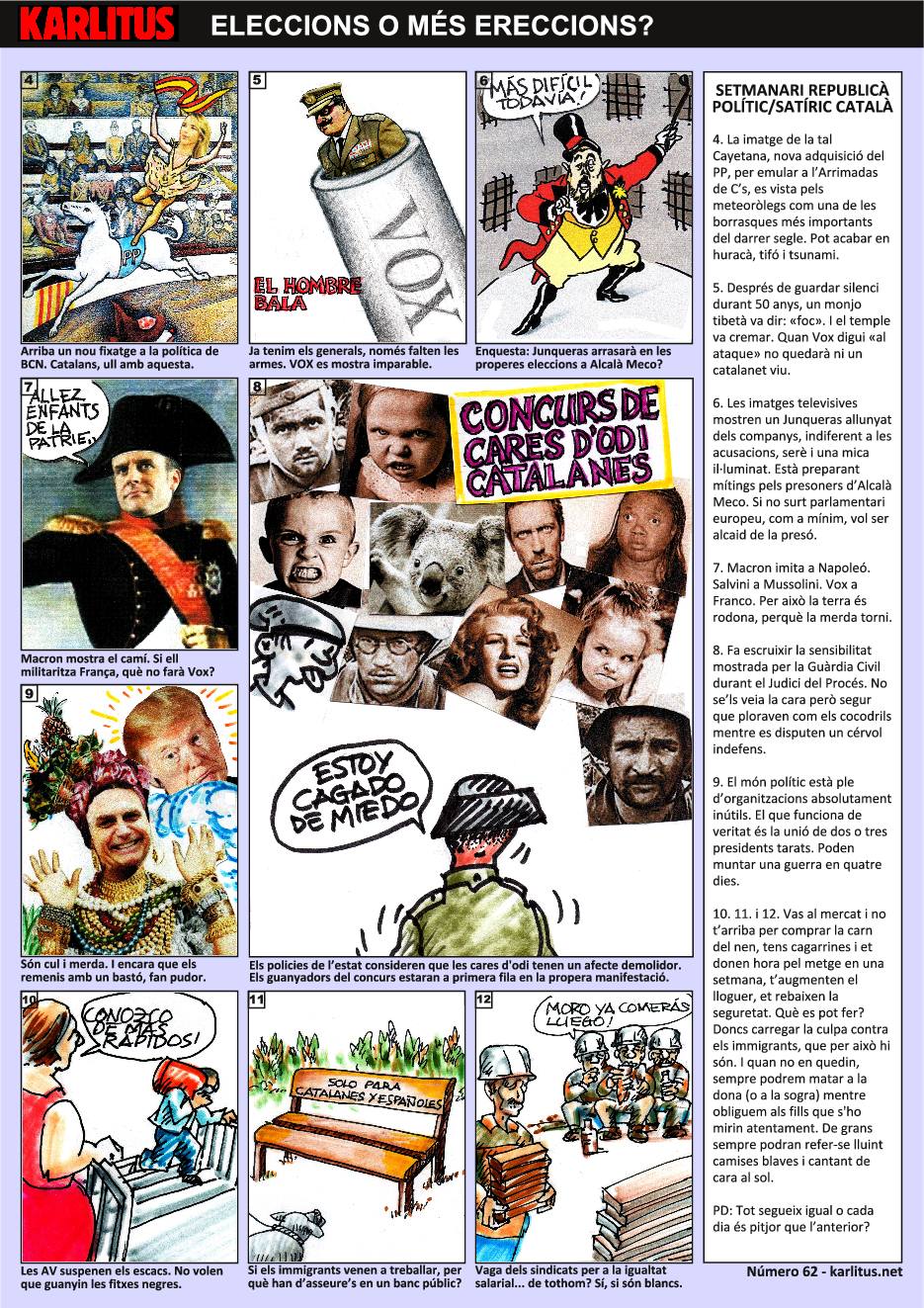 Keywords : Supreme Court. President Torra. Judge Marchena. The Lawyers in the Criminal Trial of the Catalan Government. The military and VOX. Junqueras. Macron. Salvini. Franco. Emigrants and xenophobia
Previous
Next

"Le circ du Soleil" and "Holiday on Ice" will collaborate on a new show in which they want to combine humour with staying on one’s feet. "Will Spain Slip and Fall?" is the title. Casting has begun with auditions for Spanish judges and the state police forces. The show will be sponsored by Fairy Liquid. [Note: the ex- Spanish ‘Governor-General’ of Catalonia, the renegade Catalan Eduard Millo, recently appeared as a witness for the prosecution in the trial of Catalan ministers and cultural activists. Wishing to suggest that the day of the vote had been an act of violent rebellion against the state, he explained to the judges that voters in the October 1 2017 independence referendum had squirted the viscous detergent Fairy Liquid onto the floors of the polling stations when the phalanxes of police broke into them to disrupt the referendum in order to make them fall, and then kicked them as they lay on the ground. Although he was giving evidence under oath, and no mention of any incident of this sort had been alleged even by the Spanish police and paramilitaries themselves, the judges accepted his claim].
1.- It’s like a circus, or a grand show, or a masquerade, or an orgy of judges. Regrettably, we have to say that officially it is none of these, but in fact a trial being held in the Supreme Court of Spain.


VIGNETTE 2. Text: Ballbreaker Kid i.e. who causes annoyance.
President Torra, without a yellow tie, is nobody. Even with yellow ribbons he remains a nobody. But he annoys people, which is the very least a politician can be expected to do. [Note: the yellow ribbon is a symbol of solidarity with the imprisoned Catalan leaders].
2.- That fact that Torra became the President of the Generalitat de Catalunya is a good example that the Catholic Church could use in its religious education classes when it maintains that the ways of God are inscrutable.

3.- On the last day of the trial of the Catalan political prisoners, Marchena plans to broadcast live a training session of the Spanish football team. In case anyone had doubts about his great patriotism in the service of Spain.

A new candidate for the general election swans in to Barcelona from deepest Spain. Catalans, be careful with this one.

4.- The marquess Cayetana, brought in by the Popular Party in a crafty move to emulate Arrimadas of the Citizens’ Party, has caused meteorologists to issue a sever gale warning as one of the greatest storms in centuries is on the horizon. Most likely a hurricane or typhoon with storm surges like tsunamis. [Note: the PP candidate, an Argentinian with Spanish citizenship since 2007, is seen to copy the provocative populist style of the Citizens’ Party leader – i.e. right-wing rabble-rousing, with shouted slogans repeated ad infinitum and little regard for the truth.]

We already have the generals. Only the weapons are lacking. VOX is unstoppable. [The far-right Vox party names retired right-wing army generals as its candidates in the general election].

5.- After keeping a vow of silence for fifty years, a Tibetan monk uttered just one word: Fire. His temple burst into flames and burnt to the ground. When the Vox party says "Attack!" not one Catalan will be left alive.

Election opinion poll: Will Junqueras will sweep to victory in the elections in the Alcalá Meco prison?

6.- The television images show Junqueras [Note: the imprisoned Catalan vice-president, standing as a candidate or the Euro-Parliament for the Catalan Republican Left Party, an also as a candidate for the Spanish Parliament in Madrid, Spain] isolated from his fellow party members, indifferent to the charges against him, calm and exuding wisdom. But that’s all changed – now he’s frenetically campaigning and holding election meetings with the prisoners. If the Spanish state refuse to allow him out of custody when he’s elected and he’s unable to take his seat in the European parliament he’ll at least be the unofficial governor of the prison.

Macron shows the way. If he militarizes France, will Vox do the same with Spain?
7.- Macron imitates Napoleon. In Italy, Salvini is the new Mussolini. And the leader of Vox is the new Franco. The earth is round and turns on its axis. Result: The shit eventually comes round again.


VIGNETTE 8. Text: Competition for the most hate-filled faces. Speech bubble: I’m shitting myself with fear.

Catalonia begins a campaign to find the best hate-filled faces on seeing the devastating effect they have on the Spanish state police and paramilitaries. The winners will be place at the head of future demonstrations. [Note: the Spanish police and paramilitary, as witnesses in the trial of the Catalan political prisoners, explain how terrified they were as they were surrounded by faces which viewed them with great hatred as they set about carrying out their instructions to disrupt the referendum].
8.- It’s heart-rending to hear, in the trial, the gentle members of the security forces relating how they suffered mental trauma. Their faces were hidden behind their visors and they couldn’t be seen but they were all probably in floods of tears. The tears of crocodiles fighting over a defenceless deer.

VIGNETTE 9.
They’re all in cahoots. And they stink.

9.- The political world is full of absolutely useless organizations. The only effective one is a union of two or three insane Presidents. They can organise a war in just a couple of days.

The Residents’ Association has suspended its chess championship. Black might win.


VIGNETTE 11. Text: Catalans and Spaniards only.

If the immigrants are here to work, why would they want to sit on a public bench?


VIGNETTE 12. Text: It’s us who eat now - North Africans must wait.
A strike by the unions for wage equality for men and women... That is, if they are white.


10. 11. 12.- You go to the market and don’t have enough to buy meat for the baby, you have the shits and you get a doctor’s appointment for four days later, your rent goes up, your safety in public is less assured. What can be done? Well, blame the immigrants of course – that’s what they’re for! And when there are no immigrants left, we can always kill the wife or mother-in-law, making the children observe the murder with attention. When they grow up they can put on the Fascist blue shirts and sing the Fascist anthem ‘Cara al sol’.

Footnote: Nothing changes – or else it does, but each succeeding day is worse.