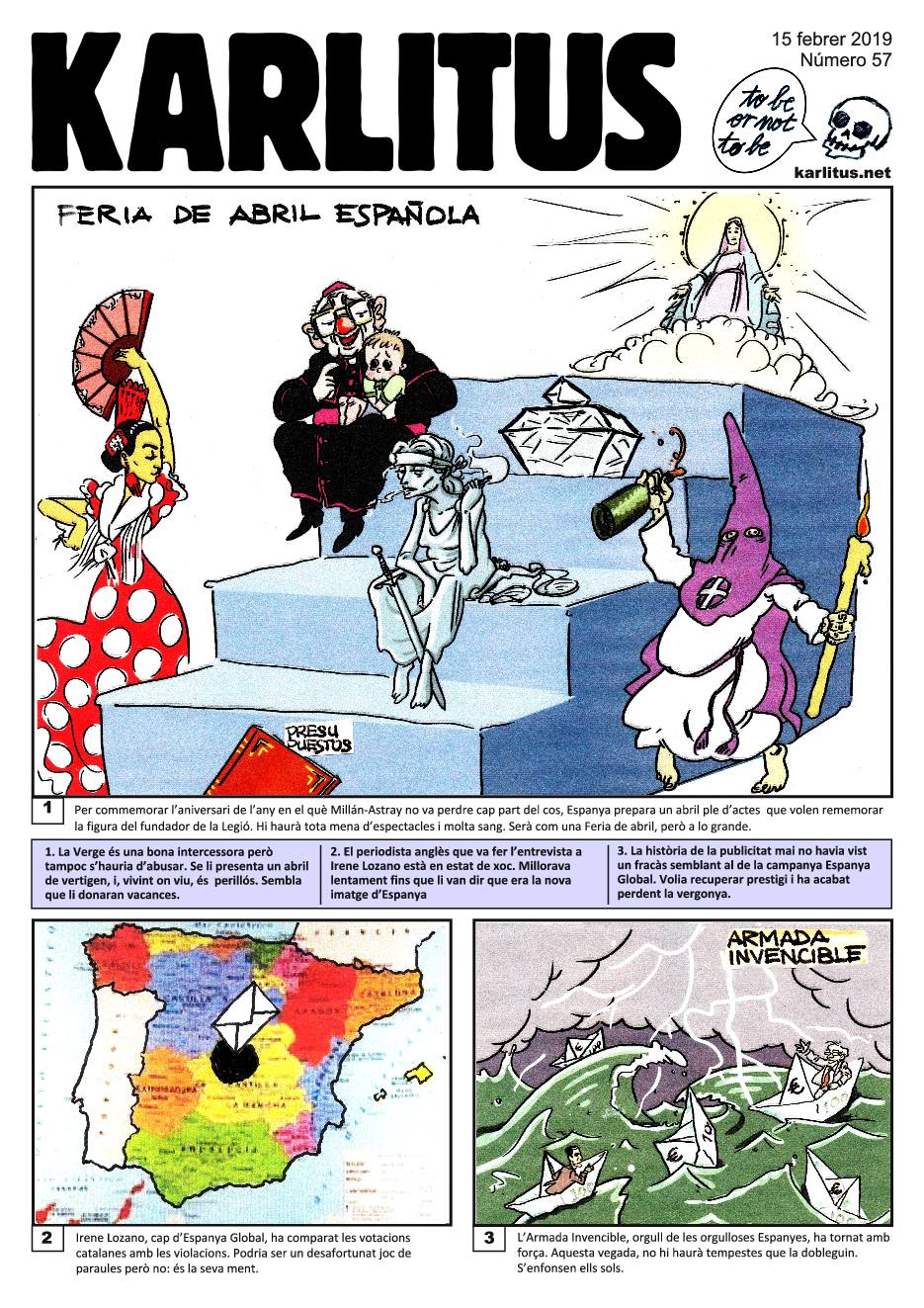 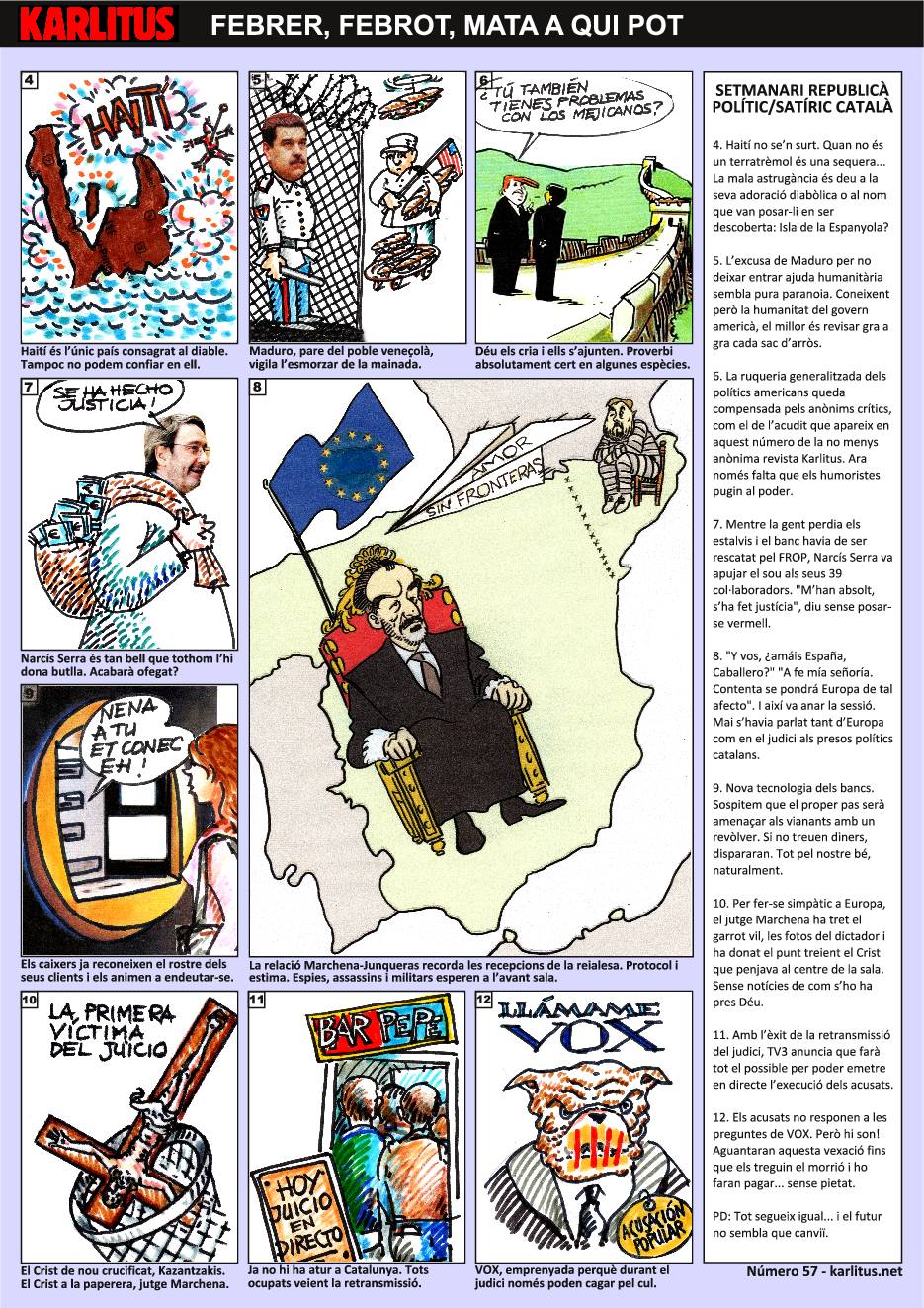 VIGNETTE 1.
[Note: The fascist José Millán-Astray y Terreros (1879 –1954) founded, and was the first commander of, the Spanish Foreign Legion. He was a prominent figure in the first years of the fascist dictatorship of Francisco Franco established in 1939. (Wikipedia: Astray was notable for his disfigured body: during his time in the army, he lost both his left arm and right eye and was shot several times in the chest and legs).]

To commemorate the anniversary of the year in which Millán-Astray did not lose any part of the body, Spain prepares an April full of events to commemorate the figure of the founder of the Legion. There will be all kinds of shows and lots of blood. It will be like an "April Fair", but bigger.
[Note: The April Fair is a folkloric celebration in Andalusia. Wikipedia: The Seville Fair (officially and in Spanish: Feria de abril de Sevilla, "Seville April Fair") is held in Andalusian capital of Seville, Spain. The fair generally begins two weeks after the Semana Santa, or Easter Holy Week. The Fair dates back to 1846 when it was originally organized as a livestock fair by two councillors born in Northern Spain, Basque José María Ybarra and Catalan Narcís Bonaplata. On 18 April 1847 the first fair was held at the Prado de San Sebastian, on the outskirts of the city.]


1.- The Virgin Mary is a good go-between between Catholic Christians and God, and will always relay a message to our Maker, but the messenger service should not be abused. This April will be a hot and dangerous month in Andalusia, with the three right-wing and extreme-right parties in charge of the regional government. Maybe she should take a holiday for the interim.

VIGNETTE 2.
Irene Lozano, head of Global Spain, has compared voting in what they call ‘the illegal Catalan referendum’ to an act of rape. It could be an unfortunate comparison, but no – it seems that these people really believe that putting a ballot paper into a ballot box is a form of sexual abuse. They wanted Spain to have greater prestige but succeeded reducing any prestige it had even further. [Note: “Global Spain” is a propaganda campaign to try and save its tarnished image abroad after its violent suppression of the Catalan referendum in October 2017 and the imprisonment without charge of the Catalan government].

2.- The English journalist who interviewed Irene Lozano fell out of his chair in shock. A slip of the tongue by Lozano? Not at all. It turned out it wasn`t a mistake – ‘referendums are rape’ is the new slogan to improve the image of Spain in other countries.

The Invincible Armada, the pride of the ultra-proud Spaniards, has returned with force. This time, there are no storms that can sink it. It’ll sink of its own accord.


3.- In the history of advertising campaigns there has never been a greater failure than the “Global Spain” campaign.

TITLE PAG 2: FEBRUARY FEVERS KILL WHOEVER THEY CAN (Catalan saying).

Haiti is the only country devoted to the devil. But we can’t trust HIM either.


4.- Haiti just isn’t pulling through. If it's not an earthquake, it's a drought ... This permanent bad luck must be because of devil worship – or the name that the Spanish gave it on invading it and taking it off its original inhabitants – Española, or Little Spain.

Maduro, father of the Venezuelan people, watches as a new diet is recommended for the country.


5.- Maduro's excuse not to let humanitarian aid enter seems to be pure paranoia. Knowing, however, what the humanity of the American government really means, it is best to check the rice in every sack grain by grain.


VIGNETTE 6. Speech bubble: What a splendid wall you have here in China! Do you have problems too with Mexicans trying to get in?
Birds of a feather flock together. A very apt proverb for certain species of leader.


6.- The endemic stupidity of American politicians is constantly being shown up by humourists, and here is a fine example of this in that paragon of incisive humour, the Karlitus weekly magazine. Now all that is necessary is for cartoonists and joke-writers to be in power instead.


VIGNETTE 7. Speech bubble: Justice has been done!
The money’s in the sack. The courts say it’s all mine, so who am I to complain?


7.- When people lost their savings and the bank of which Narcís Serra was a director had to be rescued, Mr. Serra gave himself and his 39 fellow bankers a massive pay rise. They were taken to court but mysteriously acquitted, and he announced on leaving the court, without a trace of embarrassment, that “Justice had been done.”

The Marchena-Junqueras relationship is reminiscent of royal receptions. Protocol and esteem. Spies, assassins and military personnel wait in the vestibule.
[Note: in the trial of the Catalan political prisoners, the Catalonian vice-president, before the right-wing Spanish judge Marchena, declared his love for Spain, the Spanish people and the Spanish language].


8.- “Do you love Spain, you lowly seditious Catalan prisoner?” “With all my heart, Your Honour.” This profession of love should make Europe happy. And that's how the session went. There has never been much talk of Europe as during the trial of Catalan political prisoners.

Automatic cash machines can now recognise the faces of their clients and encourage them to borrow and get into debt.


9.- New banking technology. We suspect that the next step will be to threaten passers-by with a revolver. If they do not take the money, they’ll be shot. All for our own good, of course.

VIGNETTE 10. Text: The first victim in the trial of the Catalan political prisoners.
"Christ Recrucified!" was a novel by N. Kazantzaki. Judge Marchena, to while away the time as he sits on the bench during the trial, is writing a similar novel: "Christ in the Litter Bin.". [Note: Wikipedia: Nikos Kazantzakis 1883–1957) was a Greek writer. Widely considered a giant of modern Greek literature, he was nominated for the Nobel Prize in Literature in nine different years.
Kazantzakis' novels included Zorba the Greek (published 1946 as Life and Times of Alexis Zorbas), Christ Recrucified (1948), Captain Michalis (1950, translated Freedom and Death), and The Last Temptation of Christ (1955)]. [Note: In the courtroom was a large crucifix, which was removed for fear that critics outside the Spanish state of the trial of the political prisoners could point out that the Spanish state is a secular state and in theory not under the control of any religious organisation].


10.- To make himself look amiable to Europe, Judge Marchena has removed the garrote vil [Note: a Spanish method of execution of prisoners until 1974 – an iron collar with a screw which is tightened until death through strangulation occurs], the portraits of the dictator Franco, and the effigy of Christ hanging in the centre of the courtroom. No news of God’s reaction to all this.

There is no unemployment in Catalonia anymore. Everyone’s busy watching the live broadcast of the trial.


11.- With the success of the retransmission of the Trial, the Catalan TV channel, TV3, announces that they will do everything possible to broadcast live the execution of the defendants. [Note: the Spanish government refused to allow international observers to be accredited and attend the trial, but fearing international criticism if it were to be held behind closed doors permitted it to be televised to show that it is ‘fair’. However, it is widely suspected that the sentences were decided even before the arrest of the Catalan government].

VIGNETTE 12. Text: Hello! My name’s VOX. I am the prosecutor on behalf of the people.
The VOX prosecutors are annoyed because during the trial they have to behave and can’t strut around shouting slogans and insults in the courtroom. [The fascist party VOX has been allowed to be the voice of the Spanish citizenry in the prosecution of the Catalan political prisoners – which woud be a scandal of major proportions were it to happen in other countries, but is par for the course in the Spanish state.]

12.- The defendants refuse to answer the questions put to them by VOX. But the thing is – VOX is up there on the bench, with the judge. The judge and the magistrates will make the prisoners pay for this outrageous disrespect shown by them for this honourable group of Spanish patriots.