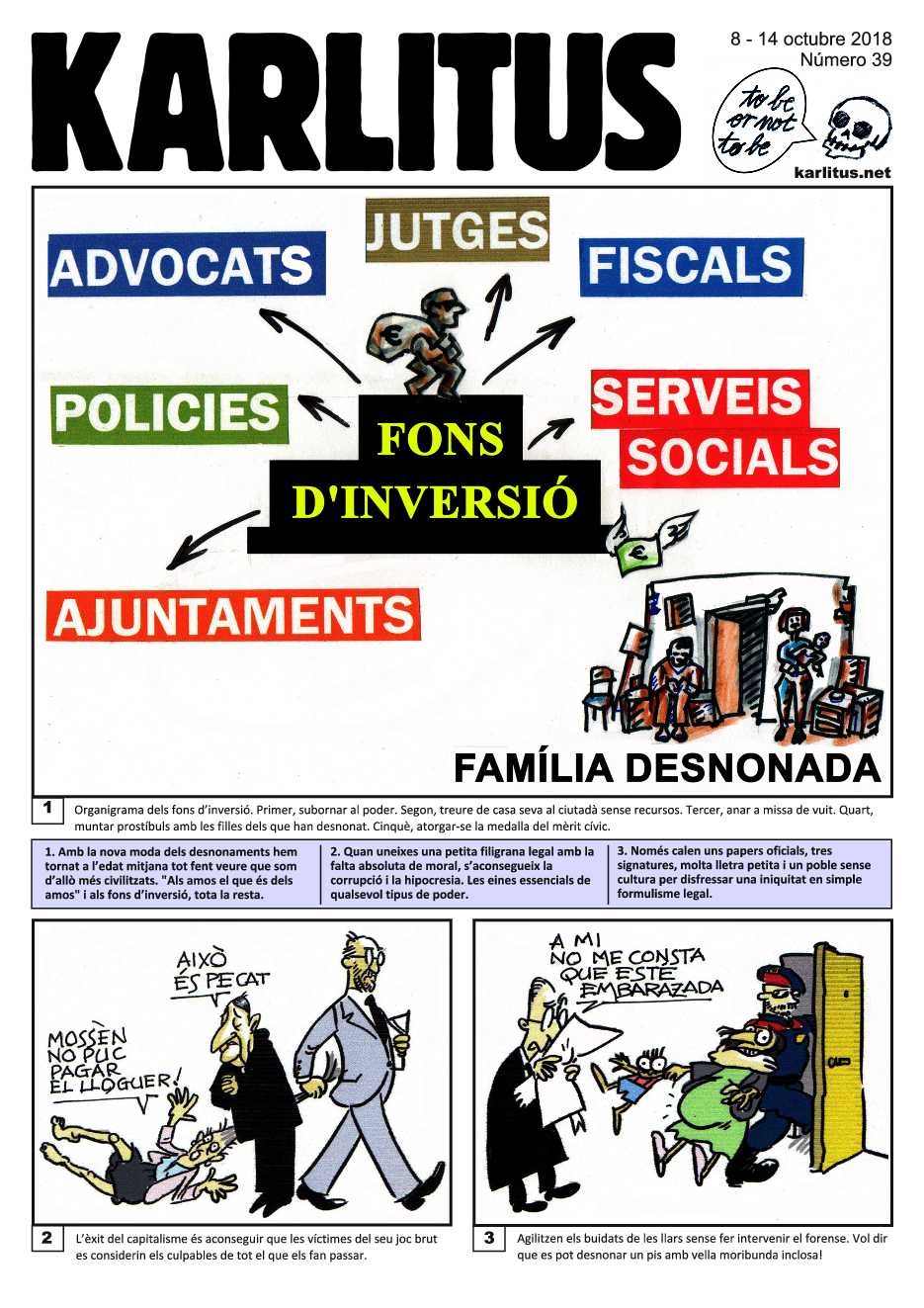 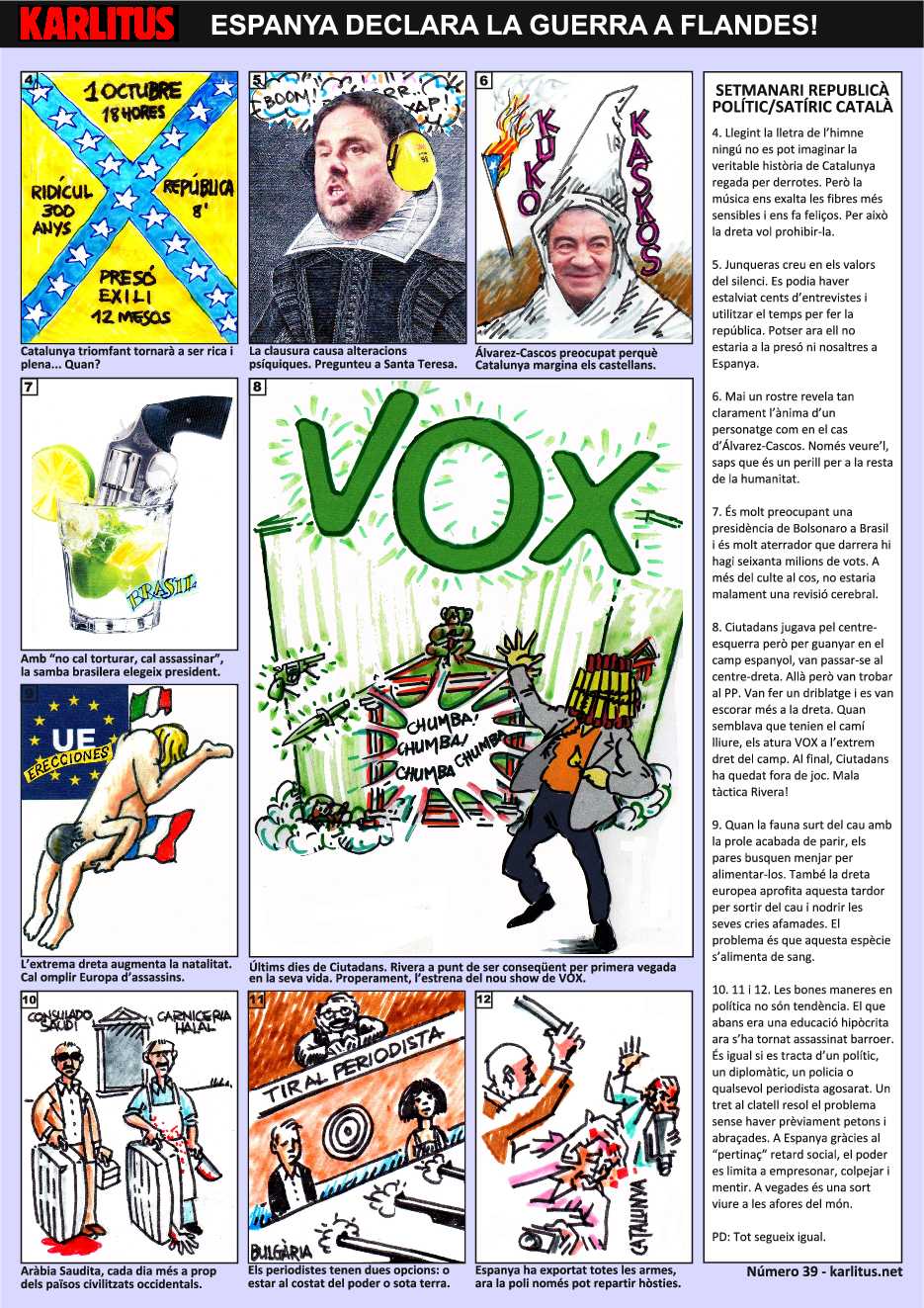 Organization chart of investment funds. First, bribe the people in power. Second, remove the destitute individual from his or her home. Third, go to the eight o’ clock mass. Fourth, set up brothels with the daughters of those who have been evicted. Fifth, grant oneself the Medal of Good Citizenship.

1.- With the new fashion for evictions, we have gone back the Middle Ages, at the same time making it appear that we are a most civilized lot. Render unto the property owners the things that are the property owners’, and unto the Investment Fund, all the rest.

CARTOON 2.- Text: Father, I cant pay the rent! Then you have sinned.

The success of capitalism is to make the victims of its foul machinations appear guilty of everything bad that happens to them.

2.- When one joins a small legal set-up that is absolutely lacking any moral sense, corruption and hypocrisy follow. For any type of power these are essential tools.


CARTOON 3.- Text: I see no indication here that she’s pregnant.
Homes are speedily emptied without any examination of family circumstances. So it’s perfectly in order to put an old lady close to death out on the street!

3.- All that is needed is some official papers, with three signatures, lots of very small print and a heartless and uncultured society so that a flagrant injustice can be disguised as a straightforward legality.

CARTOON 4.- Text: Ridicule for 300 years. On the 1 October, referendum process for 18 hours. The Catalan Republic for 8 minutes. Prison or exile for 12 months.

Catalonia will triumph and be rich and prosperous once again ... When? [Note: First line of the Catalonian National Anthem].

4.- If you go by the lyrics of the anthem you would hardly think that the true history of Catalonia has been one defeat after another. But the melody of the anthem warms our hearts and makes us feel happy. That is why the right wants to ban music.

5.- Junqueras believes in the practice of contemplative silence. If he’d done this from the beginning he could have saved himself hundreds of interviews and spent his time more usefully working towards the Republic. Maybe he wouldn’t be in prison right now and we wouldn’t be in Spain.

CARTOON 6
A. Cascos, worried about how the Castilians are marginalised in Catalonia. [Note: Castilians maintain that an alternative name for their language, Castilian, is ‘Spanish’, as if it is the sole language within the Spanish state. The aim of the Spanish state is the substitution of other indigenous languages by ‘Spanish’, and the use of the other languages is seen as a hostile act against speakers of ‘Spanish’. The ex-secretary general of the right-wing Popular Party Francisco Álvarez Cascos, who knows next to nothing about Catalonia, made the ridiculous declaration in early October that a system of apartheid has been installed in Catalonia and there is widespread discrimination against people who speak Castilian.]

6.- A face has never revealed the soul of a character so clearly as in the case of Álvarez Cascos. You only have to see him to know he’s a danger to the rest of humanity.

CARTOON 7
The Brazilian samba elects a new president. "Why torture when you can kill?”
7.- Bolsonaro as president of Brazil is rather worrying. And even more disturbing is that sixty million people voted for him. In addition to seeing his fine physique, maybe we could be shown the results of a check-up on his brain.

CARTOON 8
The final days of the Citizens’ Party. Rivera on the verge of being consistent for the first time in his life. Coming soon, the première of the new VOX show.

8.- The Citizens’ Party played left of centre to win votes, and then moved over to right of centre. That position was already taken up by the Popular Party, but they dribbled the ball past them and got to the right of them. When it seemed they had found a place on the field, the VOX party appeared on the far right-hand edge to hem them in. It looks like the Citizens’ Party is about to be forced off the field of play. Bad tactics, Rivera!


CARTOON 9.- Text: European Union. Erections.
The extreme right pushes up the birth rate. It is necessary to fill Europe with murderers.

9.- When animals comes out of the lair with their newly-born young, the parents seek food to feed them. In the same way the European right this autumn is emerging from the margins to provide nourishment for its hungry babies. The problem is that this species feeds on blood.


CARTOON 11.- Text: Bulgaria. Shoot the journalist.
Journalists have two options – either get close to the government or be six feet under.


CARTOON 12
Spain has exported all its weapons. So now the police can only attack the population with batons.

10.11.12.- Good manners are not a noticeable feature in politics. The veneer of civilised behaviour has vanished to give way to blatant murder. It doesn’t matter if it’s a politician, a diplomat, a policeman or an intrepid journalist. A bullet in the back of the neck solves the problem, and there’s no wasting time with shows of friendship and respect. In Spain, thanks to societal pressure, the government at present finds itself limited to putting people in prison, beating up the population, and making declarations which are a pack of lies. Sometimes you’d be a lot better off to live in some remote corner of the Earth.