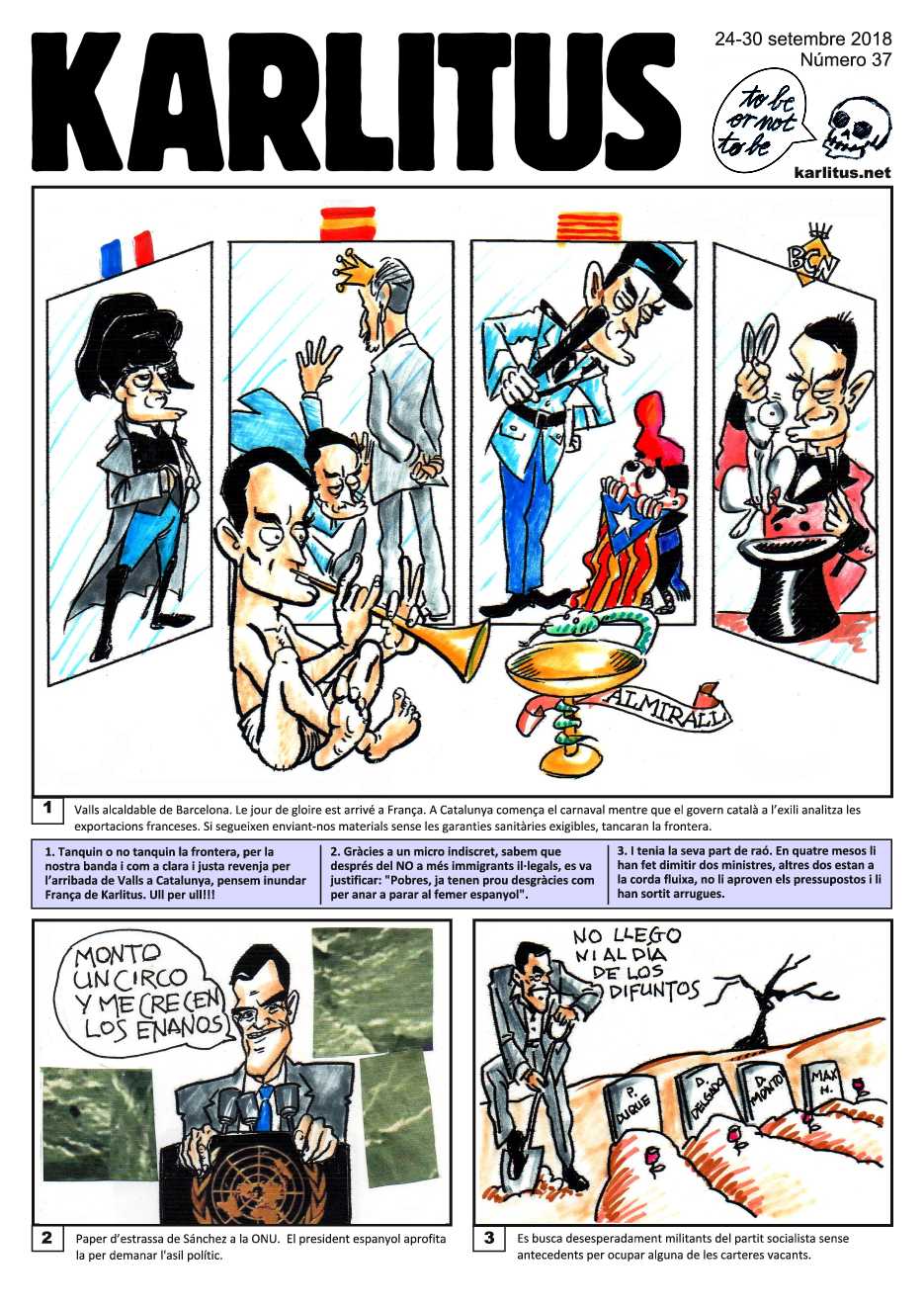 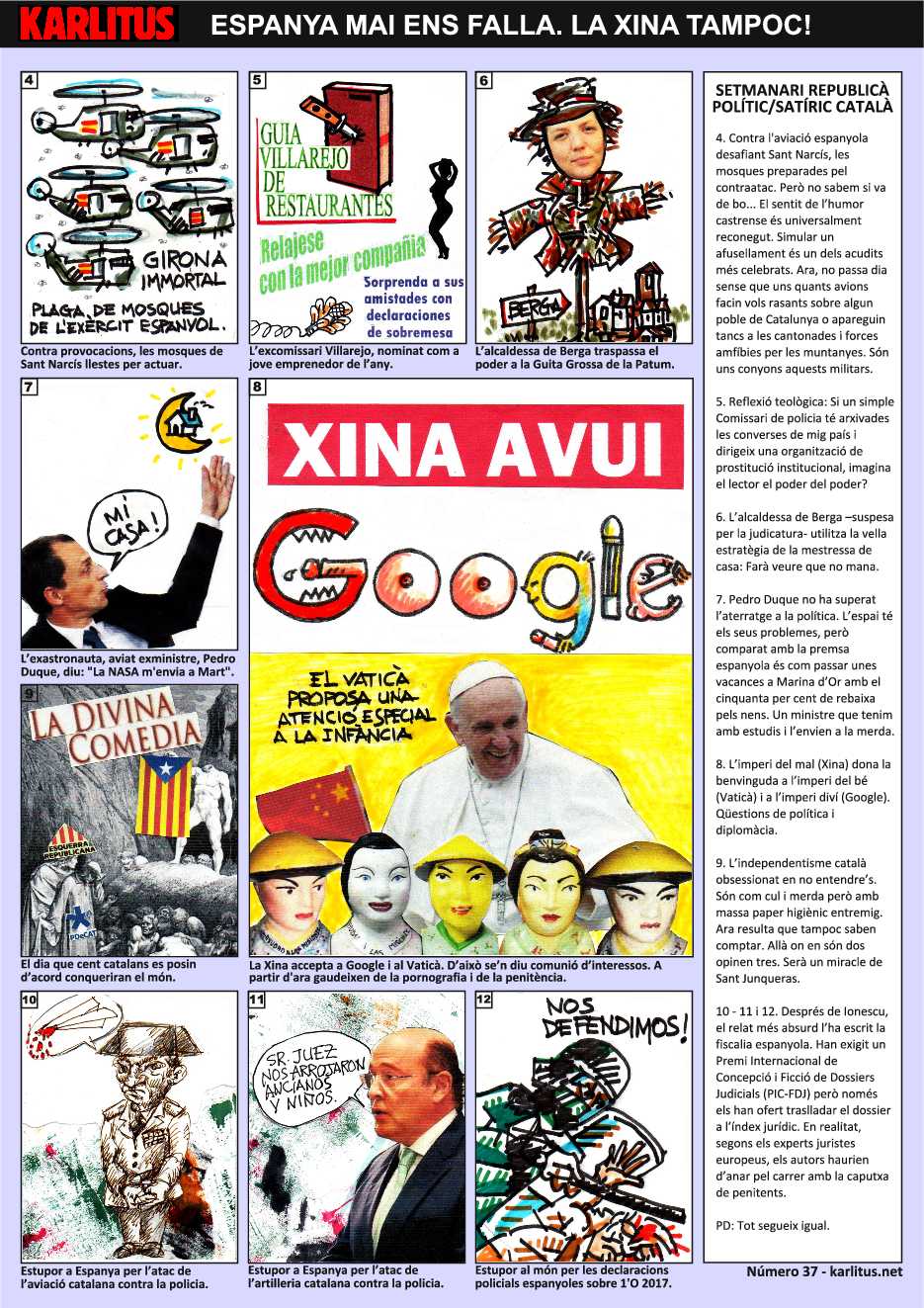 CARTOON 1
Text: Valls flees France and seeks refuge in Barcelona.
Valls stands for Mayor in Barcelona. ‘Le jour de gloire’ has arrived - in France. In Catalonia, Carnival begins, while the Catalan Government in exile analyses what France is exporting to Catalonia. If they continue to send us goods without the necessary health guarantees, we’ll close the border.

1. - Whether or not the border is closed on our side, as justified revenge for the arrival of Valls in Catalonia, we’re thinking of flooding France with copies of Karlitus. Tit for tat!!!

CARTOON 2
Text: It’s one woe after another for my government.
Sánchez at the UN. The President of Spain takes advantage of his visit to the UN to request political asylum.

2. - Thanks to an accidentally open mike, we know that after his NO to illegal immigrants, the refusal to accept them was justified like this: "Poor sods, they’ve already got enough problems without ending up in the dung heap that is Spain.”

CARTOON 3
Text: I can’t keep up with all these political corpses in my government.
We are in desperate need of members of the Socialist Party with no experience whatsoever to fill the vacancies in the Cabinet. (Note: Already two newly-appointed ministers in the Socialist government have been forced to resign, one for tax fraud and another for a false university qualification).

3. - Never a truer word. In the space of four months, two ministers have resigned, and the jobs of two others are in the balance, Parliament hasn’t approved the Government's spending plans, and he’s getting wrinkles on his face.

4. - The Spanish military with their helicopters are evidently unaware of the legend of Saint Narcís. The flies are prepared to repulse the invaders. However we don’t know what the helicopters are really up to. Maybe it’s merely an example of military humour, which is universally appreciated. One of the most humorous acts known to them is the mock execution of a prisoner before a firing squad. Simulating an execution is one of the most celebrated military jokes. At present there’s not a day that goes by without Spanish military aircraft making low-level flights over Catalan villages or a tank or two turning up at the end of the street or troops marching up and down in the mountains. The military are excellent pranksters and have us all in stitches with their jokes.


CARTOON 5
Text: The Villarejo restaurant guide. Relax in choice company. Surprise your friends with your revelations over coffee after dinner.
The ex-police-superintendent Villarejo has been nominated as young entrepreneur of the year.
(NOTE: Villarejo is a former superintendent in the Spanish police and afterwards a businessman. He was involved in state undercover operations and has leaked information about illegal activities by the Spanish state and its cronies. He is now in prison accused of financial irregularities.)

5. - A theological reflection. If a simple police superintendent has recordings of the conversations of half the population of the country and has the ruling elites in nervous suspense about what might come out next, is he on the same level as Almighty God or is he even almightier?

CARTOON 6
The Mayoress of Berga transfers her powers to the Guita Grossa de la Patum. (Note: The Patum is a local festival celeberated every year during Corpus Christi in the town of Berga. The Guita Grossa is a fearsome dragon which is a prominent feature of the festival)...

6.- The Mayoress of Berga, whom the judges have suspended from office, uses the stratagem of the mistress of the house. She is the one who manages the household while appearing not to be the one in charge.

CARTOON 7
Text: My house.
Pedro Duque, the former astronaut, and a soon-to-be ex-government-minister, says, “NASA is sending me to Mars.” (Note: Pedro Duque is a Spanish astronaut who was appointed Minister of Science, Innovation and University Education in the Socialist government in Madrid in June 2018 and who is under suspicion of tax evasion through owning two houses registered in the name of a private company).

7. - Pedro Duque has not splashed down successfully in the world of politics. Space is fraught with danger, but compared to the attacks on him by the Spanish press, being in space might be compared to a relaxed walk on the beach on a summer evening. A minister with qualifications and a career, unlike the rest, who’ll be made to walk the plank.

CARTOON 8
Text: China today. The Vatican offers to give special attention to children.

China accepts Google and the Vatican. This is what might be called called a communion of interests. From now on they can enjoy both pornography and penance.

8. - The Empire of Evil (China) welcomes the Empire of Good (Vatican) and the Divine Empire (Google). Policy and diplomacy issues.


CARTOON 9
The day in which one hundred Catalans come to an agreement that they will conquer the world.

9. - The Catalan independence movement is obsessed with its internal disagreements. They are like hand and glove but without the hand and without the glove. Now it turns out they don’t know how to count either. What is two they think is three. A bit like the loaves and fishes, though in this case a miracle of Saint Junqueras (Note: Difficulties in maintaining the majority of pro-independence MPs in the parliament because of the interference of the Spanish judiciary through imprisonments and prohibitions in order to subvert the pro-independence majority. The political prisoner Oriol Junqueras, vice-president of the Catalan Government, makes no secret of his Catholic beliefs).

CARTOON 10
The stupefaction of Spain after an attack on the police by the Catalan Air Force. (Note: The paramilitary Civil Guard, in a compilation of supposed acts of violence by Catalans against Spanish police forces, complains that demonstrators sent paper aeroplanes flying towards their parked vehicles.)

CARTOON 11
Text: Your Honour, we were under attack by thousands of old folk and little kids.
Spain in shock on hearing details of the attack on the peaceful police by merciless Catalan shock troops.

CARTOON 12
Text: We are only defending ourselves!
The world is astounded by the Spanish police version of what happened on October 1, 2017. (Note: In the October 1 referendum on Catalan independence Spanish police brutally attacked peaceful voters. According to the police, the voters were violent mobs.)

10.11.12. - In competition with Ionesco and the Theatre of the Absurd we now have the collected works of the Spanish state prosecutor.
The Spanish judiciary believes there should be an international prize for fictional works written by judges and in its absence have already awarded themselves the prize for their imagination and creativity.
According to European legal experts, the authors of the reports should don sackcloth and ashes and do penance for their untruths and misdeeds.
(Note: the reports prepared by the Spanish prosecutors to condemn the political prisoners are a travesty of the truth).