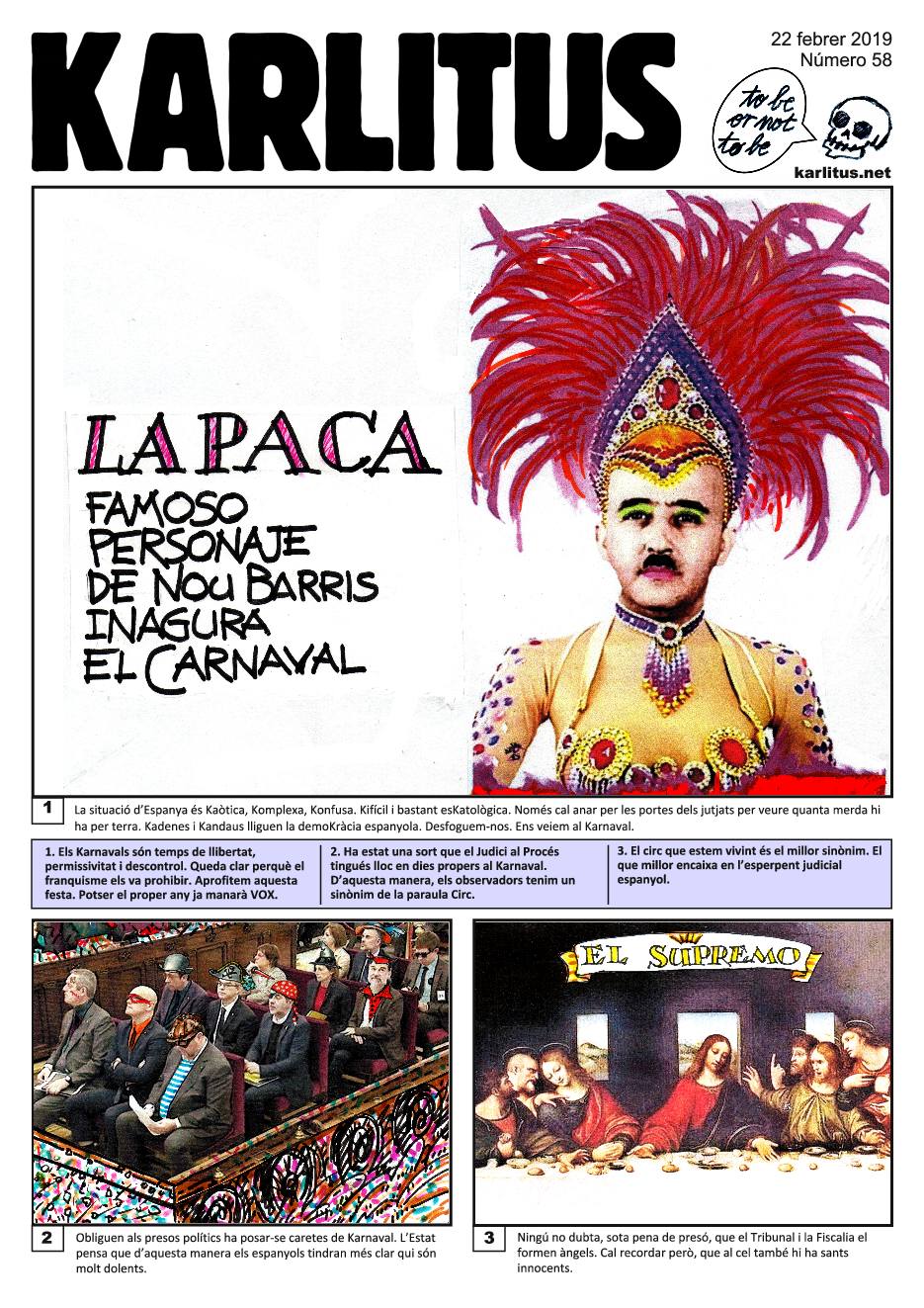 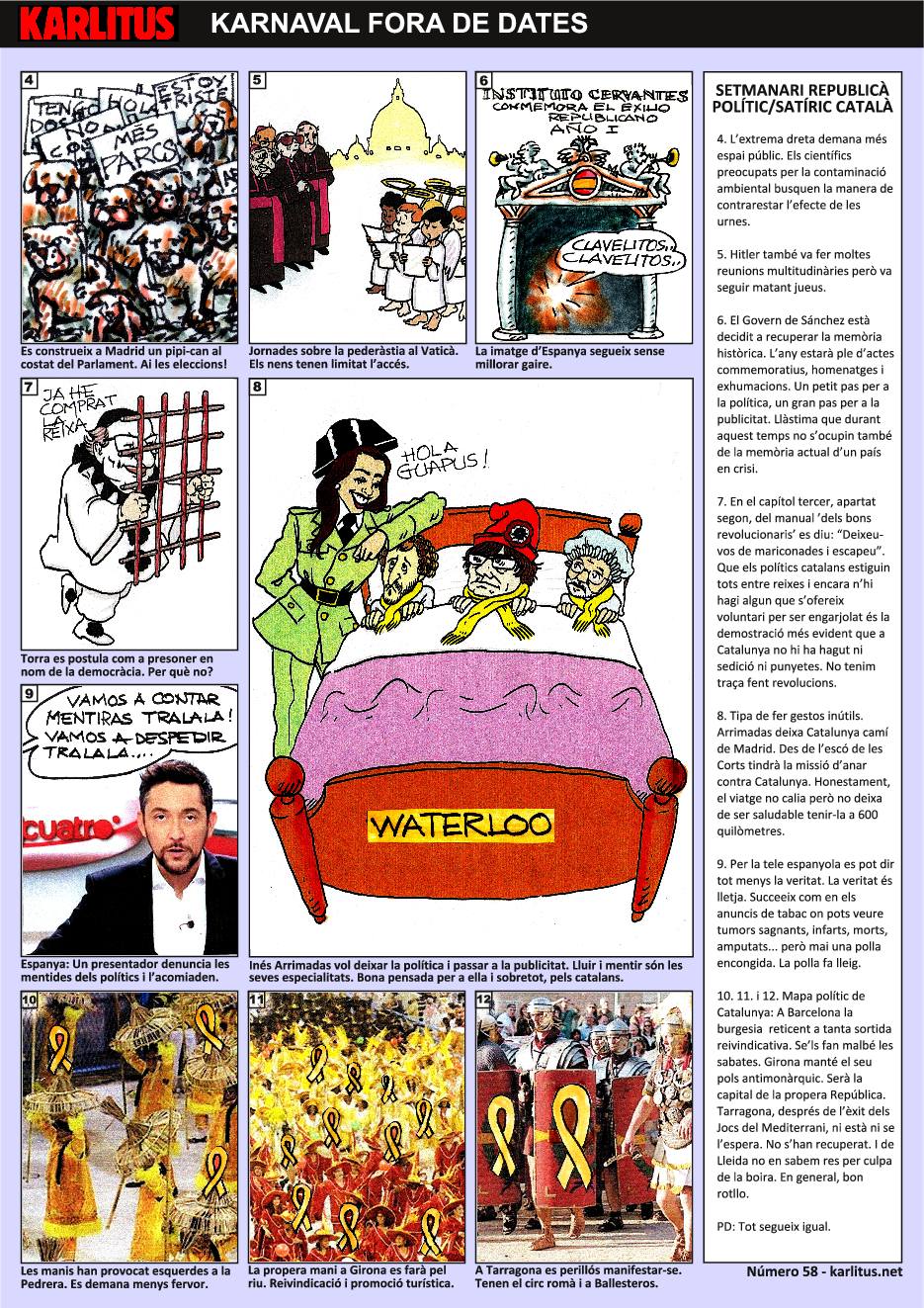 Keywords : Carnival. The trial of the Catalan political prisoners. Catalonian justice. Pederasty and the Vatican. Spain. Arrimadas. The Citizens’ Party and VOX. Demonstrations. Shite
Previous
Next

VIGNETTE 1. Text: Miss Francisca Franco. This year in the Barcelona district of Nou Barris a well-known celebrity inaugurates the Carnival. [Note: A transvestite General Franco, the Spanish dictator, appears on carnival posters throughout the district].

The situation is kaotic, komplex, konfused, kifficult and (ex)kremental. You just have to enter a courtroom to see how much shite there is all over the place. Spanish Democracy is hand)kuffed and held kaptive. To hell with it all. It's Karnival time!

1.- Carnival is a time of freedom, permissiveness and inhibition. There’s no wonder that the Franco regime prohibited it. Let's make the most of it this year. Perhaps next year VOX will be in power and we’ll be back in 1939 and Franco’s dictatorship will have started all over again.

VIGNETTE 2.
The political prisoners are obliged to wear carnival masks. In this way Spaniards will be able to see clearly that they're all bad people.

2.- Because the trial against the imprisoned pro-independence Catalonian government has gone on into February (and will last many more months, it seems), observers of the trial have seen that this year Carnival is being held twice and at the same time.

Nobody is allowed to doubt for a moment (under threat of a long prison sentence) that the Spanish courts, the Constitutional Tribunal and the State Prosecutor are all angels sent down from Heaven. But, as we all know, the devil and his demons are masters of disguise and take on many forms.

3.- This alternative Carnival though will last for months. The judges in their fancy dress will entertain us all with their comedy acts and their mockery of justice.

In Madrid an enclosure for dogs to shit in has been opened next to the Parliament. Elections are coming, and minor urban improvements are announced on a daily basis.

4.- The extreme right seeks attention and a greater presence in the life of the citizenry. They are campaigning for more peepee places for dogs as they believe that all the stinking dogshit and dogpiss sends a subliminal message to the public – vote for us!

VIGNETTE 5.
Theological debates in the Vatican on whether the Bible permits or prohibits the sexual abuse of minors. No admittance for children under 18.
5.- Hitler also held many mass meetings but continued killing Jews.

Spain’s image fails to improve.
6.- Sanchez’s Government has announced an initiative to preserve recent history. The year will be full of commemorative acts, tributes to the victims of Franco’s forces, and exhumations of bodies in mass graves. A clever ploy seeing that it is only a token gesture but it has generated great publicity for the government and will please the left of the party. Too bad that during this time they are not dealing with the current problems of a country in deep crisis.

Torra offers himself as a prisoner in the name of democracy. Well, why not?

7.- In the third chapter, section 2, in the manual of how to be a 'good revolutionary', it reads: "Give up your useless fight and flee." The fact that Catalan politicians are all behind bars and there are still some who volunteer to be locked up is the most obvious proof that there has been no sedition or anything of the sort in Catalonia. We’re just not cut out to be revolutionaries.

VIGNETTE 8. Text: Hello, sweeties!
Arrimadas wants to leave politics and go into the advertising business. She's an expert in lying and showing off. A great decision on her part, and the Catalans are thankful for it.

8.- Fed up that her theatrical performances in the Catalan parliament have had not helped her become President of Catalonia, Arrimadas leaves Catalunya and flees to Madrid. From her seat in the Spanish Parliament she will continue her war on Catalonia. Although her war is repugnant and grotesque, and she’ll wage it from whatever part of the universe she finds herself in, it’s nice to know she’ll be 600 kilometers away from us.

A Spanish TV presenter denounces the lies of politicians. He gets the sack.

9.- On Spanish TV you can say anything you like – except the truth. The truth is ugly. It’s a bit like tobacco adverts where you might see bloody tumours, heart attacks, deaths, amputations... but never a limp dick. It’s just too ugly.

VIGNETTE 10.
The demos have caused cracks in the walls of La Pedrera. Slogans should be shouted with less passion.

VIGNETTE 11.
The next demo in Girona will be by the river. Two birds with one stone - political demands and the promotion of the city as a tourist destination.

VIGNETTE 12.
It's dangerous to demonstrate in Tarragona. They have Romans and they have Ballesteros. [Note: a Socialist politician, mayor of Tarragona. In 2016 Ballesteros was charged with embezzlement, peddling of political favours, corruption and bid rigging.]


10 11 12.- The political map of Catalonia: In Barcelona the middle class is tiring of taking part in endless demonstrations. Their shoes are wearing out. Girona though maintains its anti-monarchy anger. It will be the capital of the next Republic. Tarragona, after the success of the Mediterranean Games, is out of action. It hasn’t recovered yet. And in Lleida we know nothing because of the fog. [Note: the four major cities of Catalonia]. In general, nothing could be better.