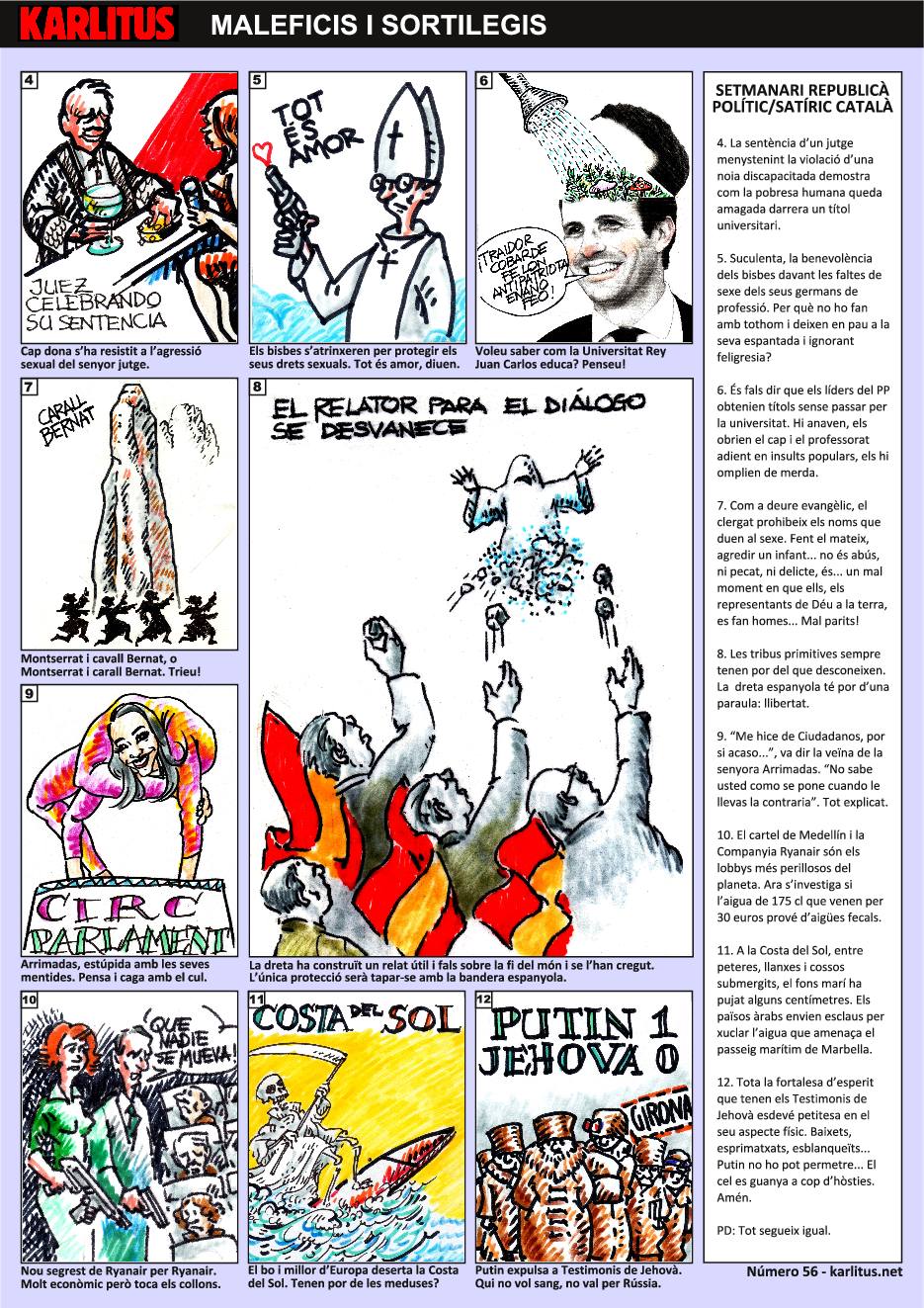 A great vision with little future. The visit of President Sánchez to Strasbourg, to give classes on the exceptional health of democracy in Spain, has been called off. Someone mentioned the International Tribunal to him and spoke in favour of the Catalan independence movement and he almost choked to death. His visit to eulogise Spain was like a masterful move in chess – except that it wasn’t so clever as he was then checkmated by his opponent.

1.- “They’re transported in prison vans as if they were VIPS, they all have a blanket in their prison cell, they have wonderful meals prepared by prison chefs, and they are exquisitely treated by the prison staff. What more could these traitors to the Fatherland want?” ask the Spanish ultra-nationalists.

VIGNETTE 2. The fever of persecution against the colour yellow has meant that the Spanish flag itself has now been called into question. The upper and lower red stripes will remain, but with the central strip missing, the blue of the skies above will have to take its place.


2.- Great traffic congestion in Madrid after the authorities prohibit amber traffic lights – because amber is yellow. A parliamentary debate will be held to decide what colour to use instead.

VIGNETTE 3. Speech bubble: The Calendar of the Soto del Real Prison.
The group of eminent individuals devoted to vetoing the colour yellow have been nominated for the Prince of Asturias Prize. Which is as you might expect, since the award is meant for people with the small closed mind of the prize’s Bourbonic sponsor, the Prince himself, or King Philip the Sixth as he has taken to calling himself since 2014.

3.- When the Catalan politicians arrived at the prison of Soto del Real, all yellow objects were confiscated, along with the satirical magazine El Jueves. It was not censorship, of course. It was on doctor’s orders – the prisoners are evidently mentally ill if they have anything yellow about them, and read magazines which make fun of all that is sacred in the Spanish state.

CURSES AND OTHER SORCERY

VIGNETTE 4. Text: The judge celebrating the sentence he has imposed.
No woman has ever been able to resist the sexual aggression of His Honour, the Judge.


4.- A judge's ruling that the rape of a disabled girl was not rape at all shows how a university degree is no substitute for a lack of humanitarian feeling.


5.- The benevolence of the bishops in the face of the sexual crimes of their fellow Brothers in Christ is touching. Leave the poor practitioners of the Gospel in peace! Well, that’s an idea. Why don’t they give up making their sanctimonious pronouncements about sexual abuse, abortion, Catalan independence, and whatever else they think is worrying God up in Heaven and leave us all in peace?

Apparently this man attended the King Juan Carlos University. Is this what they taught him?
6.- It is not true that the leaders of the People’s Party gained university qualifications without ever going anywhere near a university, much less actually doing some university course! Of course they attended – and it shows. In fact, the lecturers of the prestigious King Juan Carlos University did an excellent job filling up the brains of PP politicians with shite and they’re all, to a man or woman, extremely proficient in uttering endless strings of insults.

VIGNETTE 7.
Is this the rock of Cavall Bernat or is it an erect penis? The monks
[Note: the rock is in Montserrat mountain, near the Montserrat Monastery. Its original name is carall armat (= ‘penis like an arrow shaft and arrowhead’, but for the sake of decency has been altered (by the Catholic Church?) to Cavall Bernat or ‘Bernard’s Horse’.]


7.- As an evangelical duty, the clergy prohibit names which might promote sexual activity among the common folk. However, sexual activity by the clergy is natural and healthy. Fiddling with a child is not abuse, it’s not sinful and it’s not criminal. If caught in the act, they feign surprise. It’s not permitted? Well I never! These men of the cloth, the representatives of God on earth, are only doing it for the spiritual well-being of the child.

VIGNETTE 8. Text: A proponent of mediation is sent packing.

The Spanish right has invented a tale in which God is no longer omnipotent and no longer required because he doesn't go around wearing a Spanish flag.


8.- Primitive tribes are always afraid of what they do not know. The Spanish right is afraid of a simple word: freedom.

VIGNETTE 9. Text: Parliamentary Circus.
Arrimadas ties herself in knots with her compulsive lying. Not as clever as she thinks she is - not surprising, as her brain is in her arse.


9.- "I’ve become a member of the Citizens’ party, just in case..." says Arrimadas's neighbour. "You just can’t tell how she might react if she thinks you’re not on her side.”

Ryanair is hijacked by Ryanair. It's a low-cost high-annoyance airline.

10.- The Medellin cartel and the Ryanair Company are the most dangerous lobbies on the planet. Now there’s an investigation to see if the water they sell in small bottles on their flights for 30 euros comes straight from the sewers.

VIGNETTE 11.
The best and the worst of Europe abandon the Costa del Sol. Are they afraid of the jellyfish?


11.- On the Costa del Sol, what with sunken refugee boats, launches and dead bodies, the height of the sea floor has gone up a few centimetres. Arab countries have sent slaves to suck up the water that threatens the seafront of Marbella.

VIGNETTE 12.
Putin expels Jehovah's Witnesses from Russia. If you don't like blood, you're no good for Russia.


12.- Even with the well-known omnipotent deity God on their side, will the Jehovah’s Witnesses be able to withstand the onslaught of the extremist Putin, who has the backing of his comrades from Lubyanka Square? [i.e. HQ of the KGB in Soviet times].
[Note: 6 February 2019 A Russian court has found a Danish Jehovah’s Witness guilty of rganising a banned extremist group and jailed him for six years. Religious groups outside the Russian Orthodox fearva return to Soviet-era religious persecution. Russia’s Supreme Court has ruled that the Jehovah’s Witnesses are an “extremist” organisation and has ordered it to be disbanded.]

Postscript. It’s the same shite as always. Nothing ever changes.