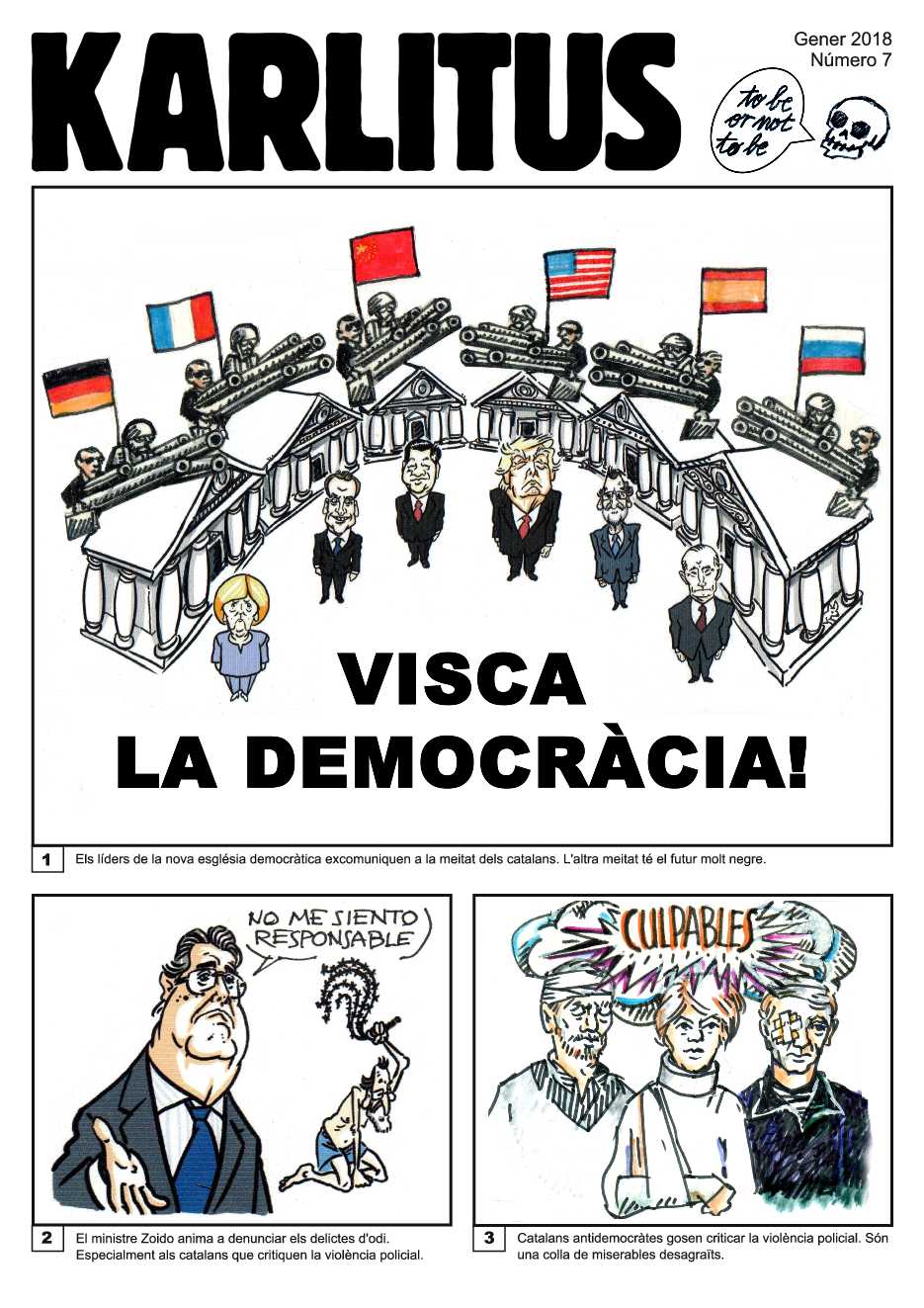 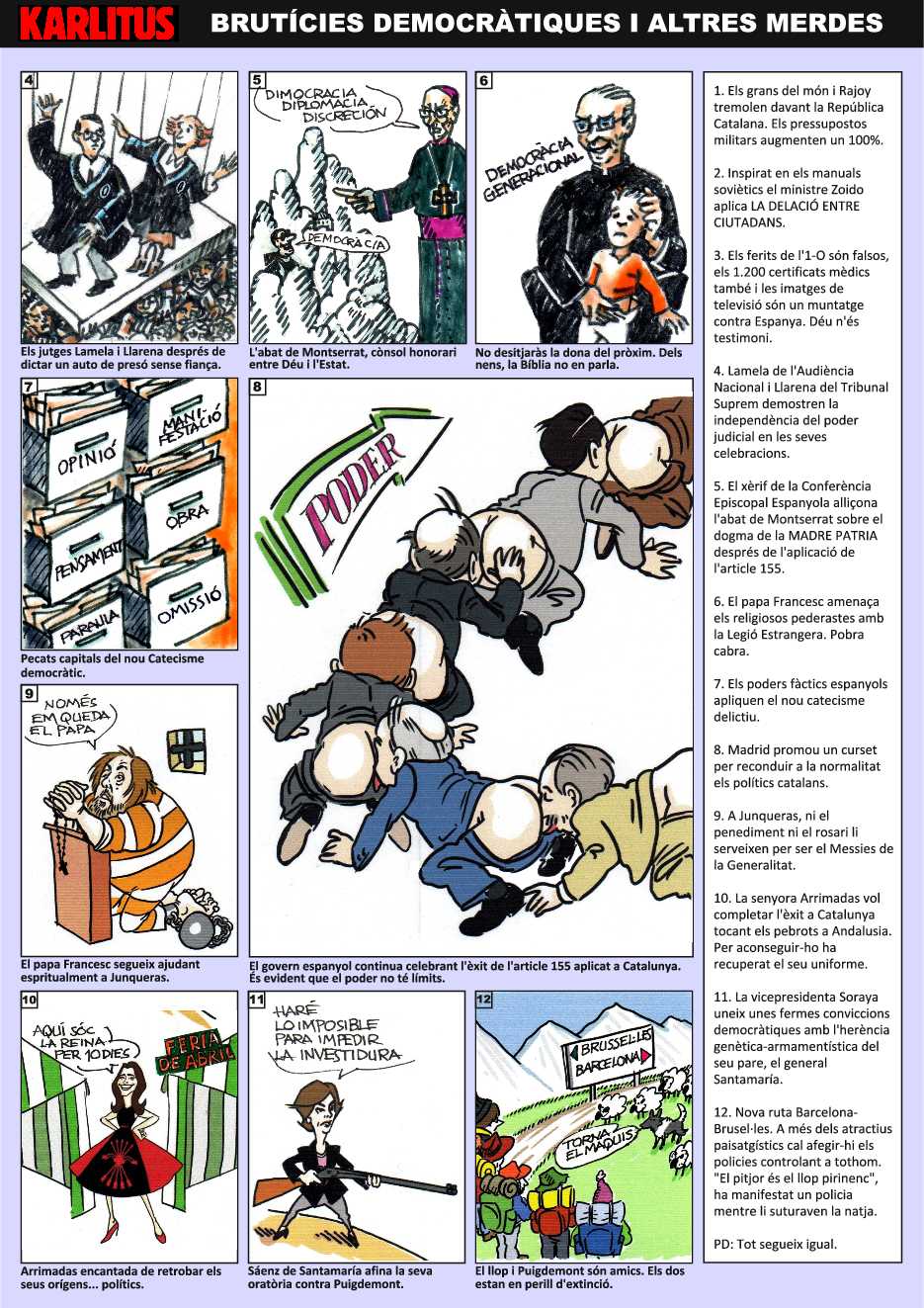 Leaders of the new, democratic church excommunicate half the Catalans. The other half have a very bleak future.


1.- The important people of the world and President of the Spanish state Rajoy quake with fear before the Catalan Republic. Military budgets increase by 100%.

VIGNETTE 2. Speech bubble: I’m not at all responsible.


2.- Inspired by Soviet Union operation manuals, the Interior Minister of the Spanish state, Zoido, requires the citizens to watch over and denounce fellow citizens.

Antidemocratic Catalans dare to criticise police violence. How ungrateful can you get?


3.- The figures for the casualties following police attacks on voters in the October the first referendum are false, as are the 1,200 medical evaluations of the injuries and the television images of police violence. It’s all part of a campaign to blacken the name of Spain. As God is my witness.

SECOND TITLE PLAN: DIRTY DEEDS OF DEMOCRACY AND OTHER CRAP.

VIGNETTE 4.
The Judges Lamela and Llarena after sending Catalans to prison without bail.


4.- Judge Lamela of the Central Criminal Court and Judge Llarena of the Supreme Court show through their decisions the independence of the Spanish judiciary.

The abbot of Montserrat, an honorary consul who acts as intermediary between God and the State.


5.- The sheriff of the Council of Spanish Bishops gives the abbot of Montserrat a lesson on the dogma of Motherland after the application of article 155 which hands over to the Spanish government control of the Catalonian government.

Do not lust after thy neighbour’s wife. But the Bible doesn't mention lusting after little boys.


6.- Pope Francis threatens to send paedophile priests to join the Foreign Legion. Its mascot, the goat, had better watch out.

The venal sins according to the new Catechism of democracy.
7.- The Spanish powers that be introduce a new criminal code.

The Spanish government continues to celebrate the success of article 155 (a legal device to suspend an autonomous government and introduce direct rule) applied to Catalonia. It is clear that power has no limits.


8.- Madrid begins a course of instruction for restoring ‘normality’ to Catalan politics.

VIGNETTE 9. Speech bubble: My only hope now is the Pope.


9.- For Junqueras neither repentance nor the rosary are of use to become the Messiah of the Generalitat.

VIGNETTE 10. Speech bubble: Here I am the Queen for ten days. Text: April Festival of Andalucians in Catalonia.

Arrimadas, the Andalusian leader of the Catalan branch of the Citizens Party, is very happy to get back to her political roots.


10.- Mrs. Arrimadas wants to crown her success in Catalonia by annoying Andalusia. To do this she has put on her old uniform.

VIGNETTE 11. Speech bubble: I will do the impossible to prevent the appointment of the Catalan President.


11.- Soraya, the Vice-President of the Spanish state, combines strong democratic convictions with the arms-dealer – the genetic inheritance from her father, General Santamaria.

The wolf and Catalan president Puigdemont are friends. Both are in danger of extinction.


12.- A new route for hikers: Barcelona to Brussels. In addition to the attractive landscapes, the police controlling everybody at the border should be mentioned. "The worst thing is the Pyrenean wolf," says a policeman while having his buttocks sewn up.

PS: Every thing is the same.