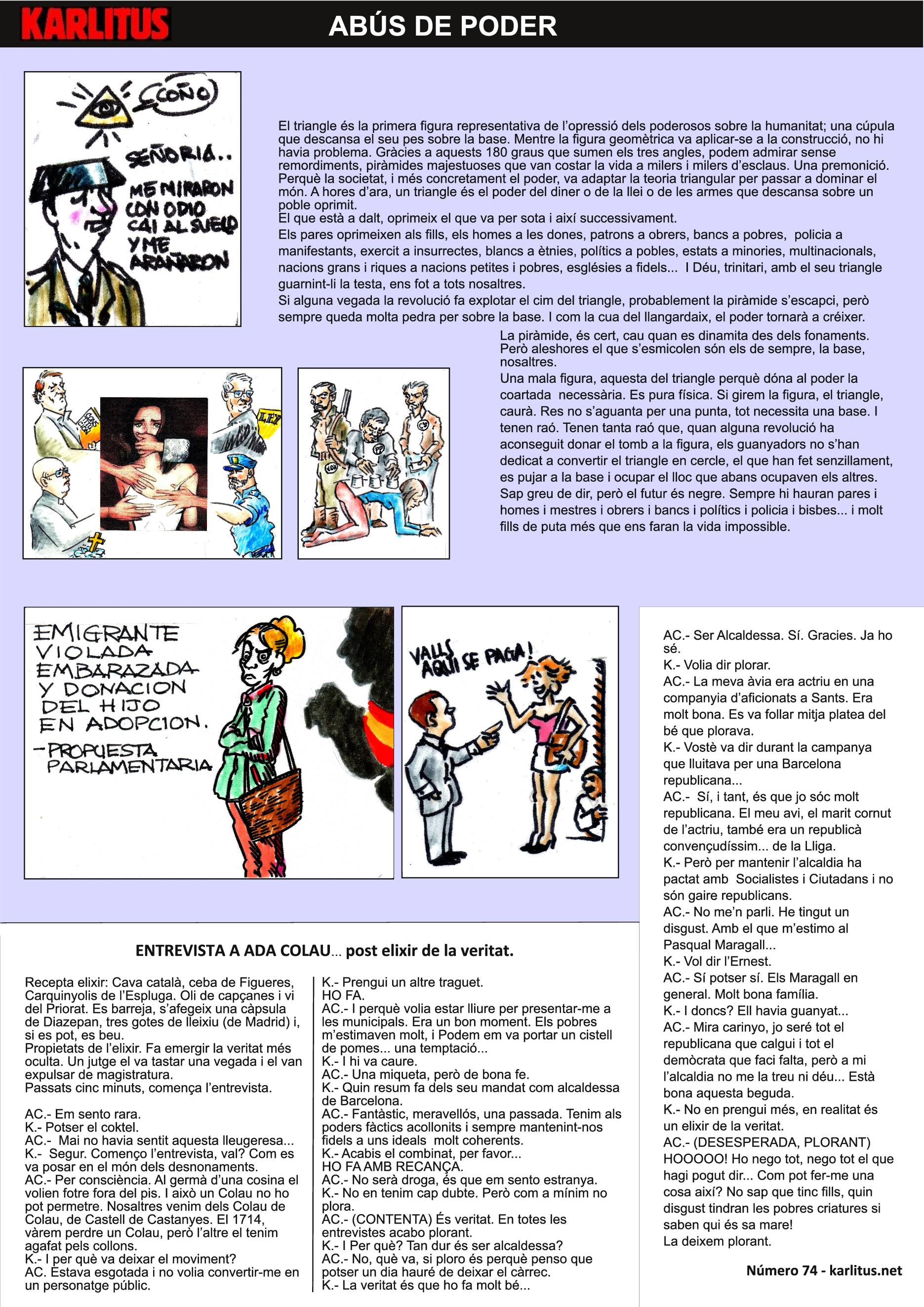 SEX AND SOCIETY.
Karlitus’s financial backer and patron – who is completely impartial – so impartial that he has never once seen any of the magazine’s cartoons – is a man who has had the most intense sexual life in all the state of Spain - excepting certain males in the Spanish royal family. If we could collect all his ejaculations they’d fill a milk tanker. Our patron has performed in duos, trios, squares, circles and numerous orgies. The most charming aspect of all this is that he is virgin. No bed companion – woman or man – or domestic pet has been the object of a carnal act of his. And this is precisely what makes sex a subject so close and dear to humanity.

Because the lack of a sex life unites us in mediocrity and lies. Dear friends: humanity does not do sex, humanity imagines sex. Furtive ejaculations and orgasms between pillows become imagined accounts of real sexual acts. The difference between the actual sexual activity of males and females and what they claim to have done during their lives is as enormous as the distance between our solar system and the rest of the universe. Billions and billions of light years.

Sex, at least the sex that interests and excites us, has nothing to do with the bouts of gymnastics that humans indulge in on Saturdays in the matrimonial bed. Sex is a cell (a big cell, I have to admit) that interacts in the human neuronal network generating desires, imaginations and pleasures. The same network in part that makes us believe in God or makes us put up with a miserable existence by thinking of a just and eternal life after reincarnation. In brief, sex, like faith and other human notions, is pure imagination, although it has to be recognised that it helps us a lot in living life.
When species have a good time sexually it is not when copulating with the partner but rather imagining that they are having coitus in manifold ways with another partner... Hence prostitution and pornography are useful ways of delivering orgasms – or even a melon, at a suitable temperature with a purpose-drilled hole in it.

Sex is like life. It’s the abandonment of hope. The conformity of the poor man, the miracle of sad reality. Humans do not want to breed more humans. They want to feel like gods or slaves in a carnal struggle with another person. But we are constrained by our damned culture – it would be nice to walk around naked all day free from all inhibitions, especially after oral sex or mammary intercourse, or even worse, after Spanish sex (the woman wears a nun’s wimple and the man doesn’t take off his trousers). Sex, by definition, is letting go. But in the Spanish state nobody lets go because it is sinful and shameful.

Conclusion. Don’t believe a word of what people tell you about their sexual adventures. They are simply the result of an over-active imagination while manipulating their stunted sex organs. Or even more explicitly – those who brag of great orgasmic experiences are just people like us. Merely wishful thinkers.

The triangle is the foremost representation of how humanity is oppressed by the powerful; like a dome whose great weight is borne by the base on which it stands. While this geometric shape was applied to buildings there was no problem. Thanks to these 180 degrees, the sum of the three angles, we can admire the majestic pyramids – though we should perhaps bear in mind that constructing them cost the lives of thousands and thousands of slaves.

A premonition. Society, and more specifically the powerful, adapted the theory of the triangle to dominate the world. Nowadays the three points of a triangle are the power of money, the law, or the weapons that weigh down on an oppressed people.

What is on top crushes what’s below it.
Parents oppress children, men oppress women, employers oppress workers, banks oppress the poor, the police oppress protesters, armies oppress dissidents, whites oppress other ethnic groups, politicians oppress the people, states oppress minorities, multinational corporations and large rich states oppress small nations and the poor, churches oppress their believers... And God, Head of the Holy Trinity, on the apex of the triangle, tramples all over each and every one of us.

If at any time the revolution decapitates the apex of the triangle the shape remains more or less complete. There is still a lot of stone above the base. And like a lizard's tail, the apex will regenerate - power will grow back. A pyramid, it is true, will collapse when the foundations are dynamited. But what is blasted to smithereens is us, as always, at the bottom.

It’s a geometric shape that doesn’t favour us at all, that of the triangle. It gives power the necessary excuse to exert itself. It’s simple physics. If we invert the shape, it falls down. Nothing can support itself on its tip - everything needs a base. And what they say is right. They are quite right to point out that when a revolution has succeeded in making the triangle fall, the victors do not turn the triangle into a circle. They simply climb up to the new apex and occupy the place that was formerly occupied by the others. I’m sorry to say this, but the future is bleak. There will always be parents and men and teachers and workers and banks and politicians and police and bishops... and many other evil bastards to make our lives pure misery.

INTERVIEW WITH ADA COLAU… After she unwittingly drank a truth potion.
Recipe for the drink: Catalan cava, an onion from Figueres, carquinyolis (Catalan dry biscuits) from l'Espluga, olive oil from Capçanes and Priorat wine. The ingredients are mixed together, a Diazepan capsule is added, together with three drops of bleach (from Madrid). If possible, it is then drunk.
Properties of the potion: It reveals even the most recalcitrant truths. Once a judge tasted it and he was immediately expelled from the legal profession.
After five minutes, the interview begins.

AC.- I feel strange.
K.- Maybe it’s the drink.
AC.- I’ve never before experienced such light-headedness...
K.- I’m not surprised. Let’s start the interview! How did you get into the world of evictions? [Note: Colau was known for anti-eviction protests before entering conventional politics].
AC.- For reasons of conscience. A landlord wanted to evict the brother of a cousin of mine from his flat. And no Colau can let that happen. No, under no circumstances! We are from the Colau-FitzColau family, from Castillo de Castañas [= chestnut castle, or castle of the drinking sprees]. In 1714, we lost the FitzColau (in strange circumstances – there was apparently some sort of historical event in that year but I’ve no idea what it was) and now we are just plain proletarian Colau.
K.- And why did you leave the anti-eviction movement?
AC. - I was exhausted and I didn’t want to become a household name.
K.- Take another swig of the drink.
SHE DOES.
AC.- And because I wanted to be free to stand as candidate in the city council elections. It was just the right moment. The poor admired and loved me, and the Podem party saw they could get their votes by putting me at the top of their list of candidates... and this was rather tempting...
K.- And temptation got the better of you...
AC.- Just a little bit, but everything I did was in good faith.
K.- How would you sum up your four years as Mayoress of Barcelona, from 2015 to 2019?
AC.- Fantastic, wonderful, absolutely great. We put the fear of God into the rich and powerful and remained faithful to our principles which are absolutely transparent and consistent. [Note: quite the opposite of what really happened – the En Comú party easily accommodated itself to the ruling elites, and the party’s principles were at best unclear, if not wholly contradictory].
K.- You seem quite wistful talking about it. But... you’ve not finished your drink. Drink up!
AC.- It’s not been spiked, has it? I feel a bit strange.
K. – Doubtless you do. But at least you haven’t burst into tears.
AC.- (Happily) It's true! In all my interviews I always ended up crying.
K.- Why’s that? Is it the stress of being mayoress?
AC.- No, of course not. I cry if I think that maybe one day I'll no longer be Mayoress of Barcelona.
K.- The truth is that you do it very well ...
AC.- Yes, I know. I’m a fantastic mayor.
K. - I meant crying.
AC.- Oh! Well, my grandmother, you see, was an amateur actress in (the Barcelona district of) Sants. She was really good. She wasn’t very pretty, but her ability to cry made people feel sorry for her, and thanks to that she managed to get laid by all the other actors there.
K.- You said during the campaign that you were fighting for a Republican Barcelona...
AC.- Yes, indeed. I’m very Republican. My grandfather, the deceived husband of my actress grandmother, was also a very convinced republican... in the Regionalist League. [Note: Lliga Regionalista de Catalunya / The Regionalist League of Catalonia (1901–1936) was a Catalan right-wing political party of Catalonia, Spain, with a conservative and pro-monarchy ideology.]
K.- But to keep yourself in power for a second term as mayoress you’ve had to get the support of Socialists and the (right-wing) Citizens’ Party and they are not exactly Republicans.
AC.- Don’t talk to me about it! It really pained me to do it. And how I love and respect Pasqual Maragall [Note: former Socialist mayor. His brother, ex-Socialist Party member Ernest, was the winner of the Barcelona elections as head of the pro-independence Republican Left party]....
K.- You mean Ernest, his brother.
AC.- Do I? No - the Maragalls in general. A very good family.
K.- Well, how’s that? Because Ernest Maragall won the council elections, but he’s not the mayor, as one would have expected...
AC.- Look, sweetie, I will be as Republican as I need to be and as democratic as I need to be. Nobody is going to stop me from being the Mayoress of Barcelona. By the way, this drink is really good!
K.- Don’t drink any more of it – it’s a truth potion.
AC.- (IN DESPERATION, IN TEARS) BOO-HOO! I deny everything I might have said. How could you do something like that to me? Don’t you realise I have children? They’ll be so disappointed when they find out just what their mother’s like!
At this juncture, dear reader, we take our leave and let the mayoress cry her eyes out alone…