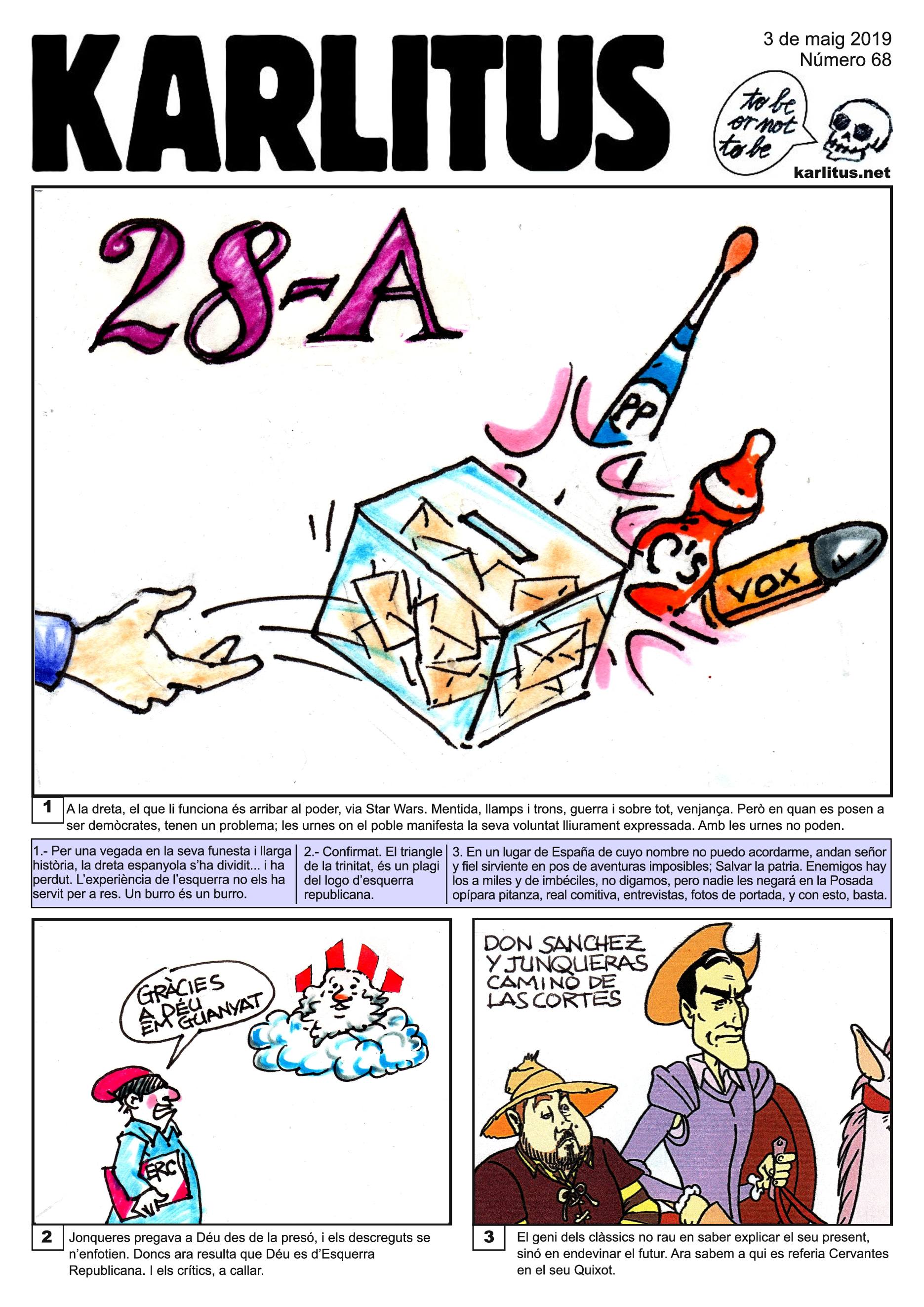 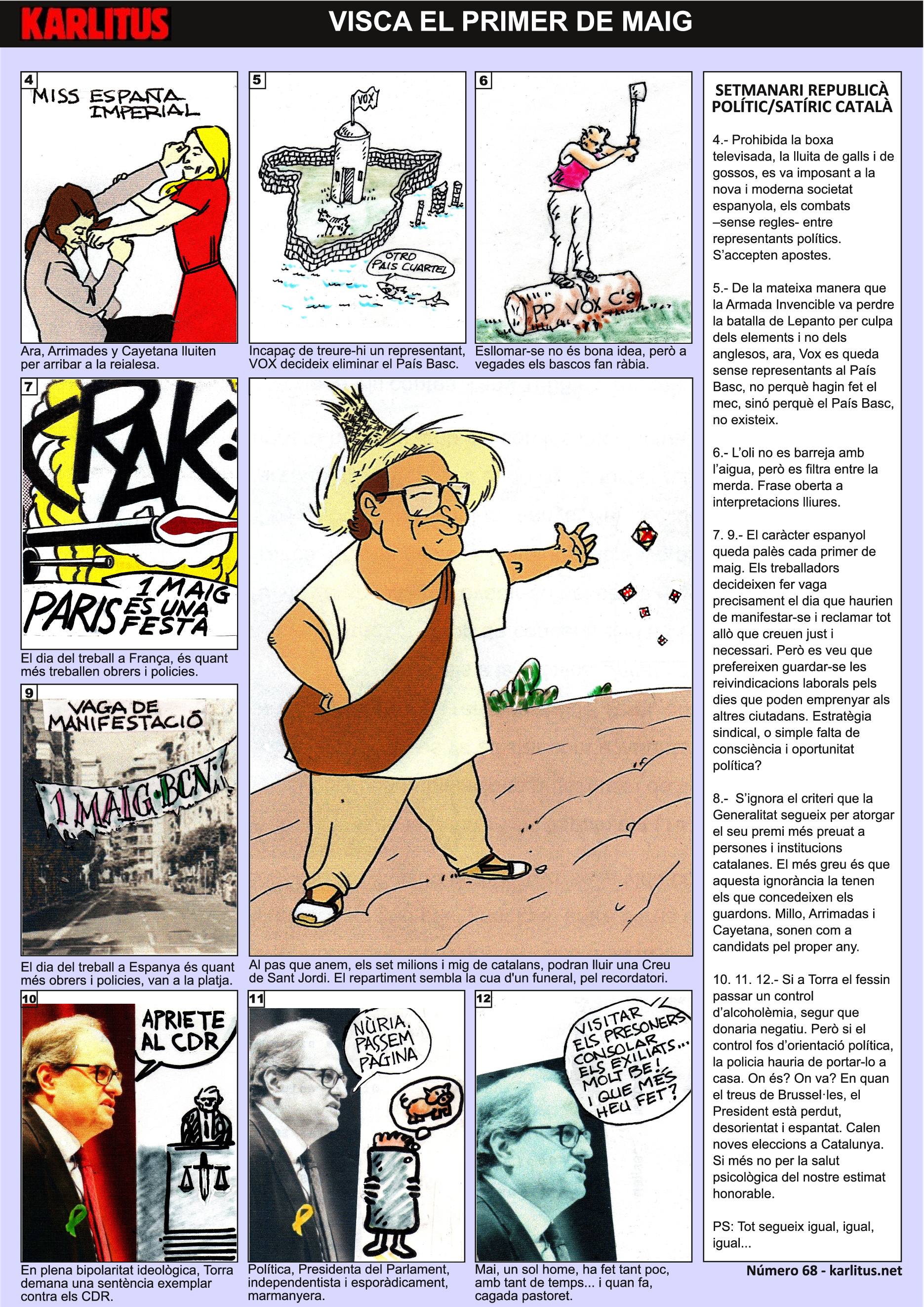 Keywords : The right-wing parties. Junqueras and God. Don Quixote. Arrimadas and farewell to Catalonia. The Basque Country and Vox. France, May 1. President Torra. The Republican Left and the elections
Previous
Next

Political/satiric republican weekly of Catalonia
14 may 2019

For the right, the way to get into power is by using the Star Wars approach. Thunder and lightning, bare-faced lies, war and, above all, vengeance. But if they pretend to be democrats they have a problem – it’s called ballot boxes and the use of the vote. If they rely on people’s votes they’re unlikely ever to gain power.

1.- For the first time in its long dark history the Spanish right has split... and it has been unable to get into power, in spite of having a majority of votes. The experience of the fragmented left should have taught them something. But idiots will be idiots.

VIGNETTE 2. Speech bubble: Thanks to God we've won.
Jonqueras prayed to God in his prison call, and the non-religious laughed at him. Well, it turns out that God supports the Republican Left party. And the critics have had to shut up.

2.- God has confirmed that the triangle representing the Trinity of the Father, the Son and the Holy Ghost is in fact a poorly-disguised copy of the party’s logo.

VIGNETTE 3. Text: Sanchez and Junqueras on their way to the Parliament.

The value of classical literature is not that it explains our present condition to us but that it guesses the future. We now know who Cervantes was referring to when he wrote about Don Quixote.

3.- In a place in Spain whose name I forget the nobleman and his trusty squire go on a quest for the impossible – the salvation of the fatherland. There are enemies in their thousands, and idiots in their tens of thousands but nobody will deny them, when they at last reach the inn, their splendid banquets, their entourage of admirers, the interviews and photos - and as the list is endless, that’s enough for now.

Cat fight. Arrimades and Cayetana fight each other to be queen. [Note: the PP candidate and the C’s candidate use the same tactics to attract pro-Spain votes in the general election in Barcelona – lies and insults and outright rabble-rousing]

4.- Now that boxing matches on TV, cockfighting and dog fights are all prohibited, modern-day Spanish society has a new sport – one with no rules- combats between politicians. All bets are accepted.

VIGNETTE 5. Speech bubble: Another country which is an army barracks.
Unable to get a member of parliament elected in the Basque Country, VOX decides to eliminate it.

It’s not a good idea to tell the Basques what they should do – even though the three right-wing Spanish parties know, more than the Basques themselves, what’s best for the Basques.

6.- A second Gernika is what the Basques need to teach them a lesson. In a democracy aerial bombardment of civilian populations is not allowed. But Spanish democracy is not your usual kind. There is surely a clause in the Spanish Constitution that will permit it.

VIGNETTE 7. Text: Paris. The First of May is a holiday.

In France, International Workers' Day on May the first is when the workers and the police work most.

7. 9.- The Spanish character is evident every first of May. The workers decide to strike on the very day they should be demonstrating and demanding everything they believe just and necessary. But they prefer to make their demands on days when they can cause most upset and annoyance to their fellow-citizens. It is either a clever strategy by the trade unions or else lamentable timing and a lack of political nous.

As the rate we’re going, seven and a half million Catalans will be able to wear the Cross of Saint George. It’s like a wedding with confetti being thrown right, left and center, or the sowing season when seeds are cast in all directions.

8.- The criteria that governs to which Catalans and Catalan institutions the Generalitat should award its most precious medal are ignored more and more. What next? Will we see it being given next year to Millo, Arrimadas and Cayetana? [Note: Politicians noted for their virulent anti-Catalan and anti-Catalonia attitudes].

A working day in Spain is when most workers and police go down to the beach.


VIGNETTE 10. Speech bubble: Put the screws on the Committees for the Defence of the Republic.

In a display of complete ideological bipolarity, Torra calls for an exemplary sentence for the CDRs.

VIGNETTE 11. Speech bubble: Núria, let's go on to the next page.

The President of the Catalan Parliament. A tireless supporter of Catalan independence but on the whole inoperational, and when in operational mode prone to making gaffes.

VIGNETTE 12. Speech bubble: Visiting the prisoners, giving solace to the exiles. All very worthy. But what else have you done?
Never has a sole man done so little for so long... and when he does, what a mess he makes of things!

10. 11. 12.- If Torra had to take a breath test it there’s no doubt it would be a negative result. But if the test was one of political direction, the police would have to take his keys from him. Where is he? Where is he going? The President is lost, disoriented and startled. New elections are needed in Catalonia. If only to preserve the mental health of our beloved right honorable president.