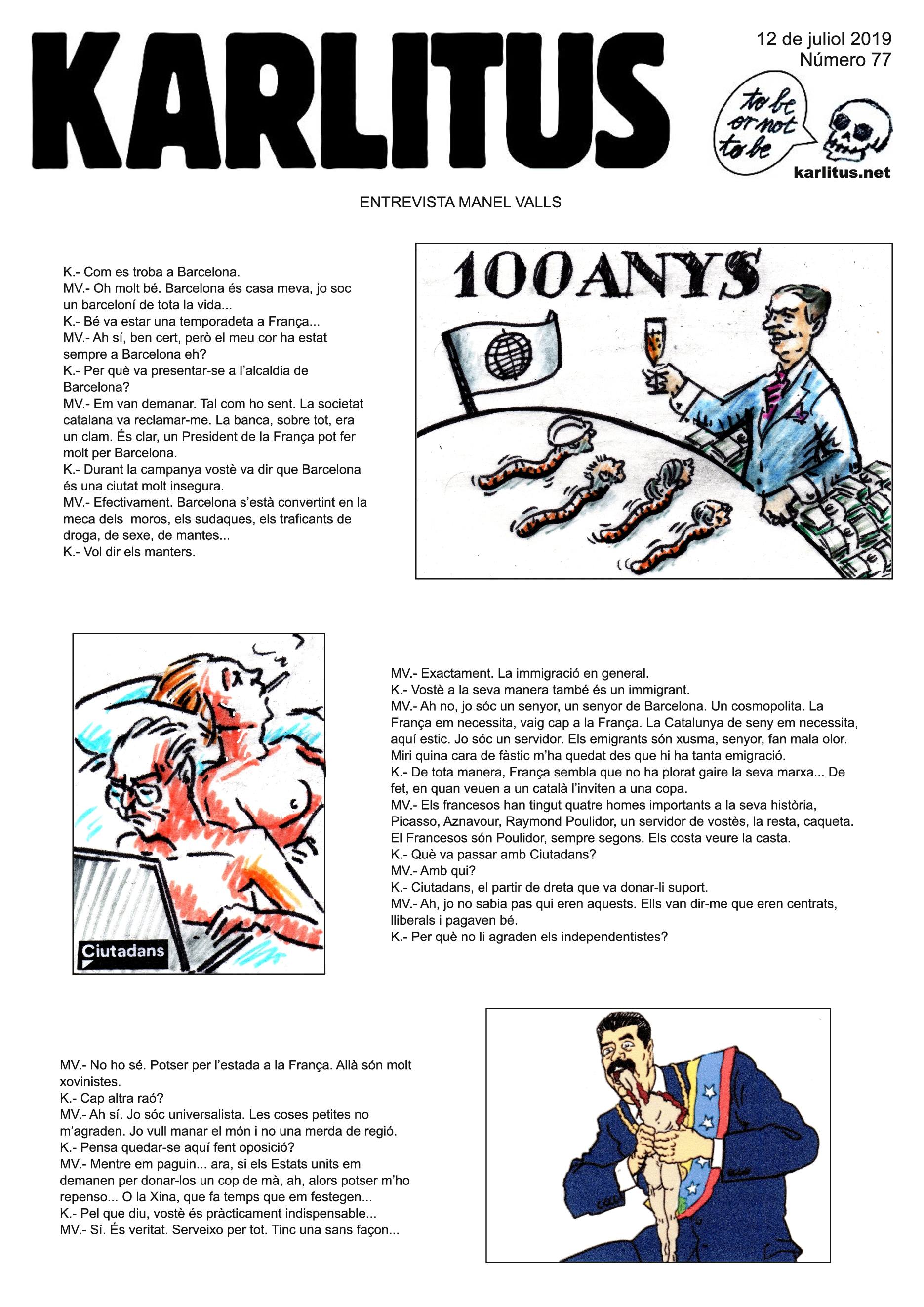 THE MANEL VALLS INTERVIEW
K.- How are you finding Barcelona?

K.- But you were in France for a time, weren’t you?

MV.- Oh yes, that’s right, now you mention it. But my heart has always been here in Barcelona.

K.- Why did you stand for election as mayor of Barcelona?

MV.- I was asked to. That’s why. The Catalan people requested me to do it for them. But perhaps more insistently the banks, who implored me to be a mayoral candidate. Of course, an ex-Prime Minister of France can do a lot for Barcelona.

K.- During the campaign you said that Barcelona is a very unsafe city.

K.- You mean those people seIling things in the street laid out on blankets?

MV.- Oh no, I am a gentleman from Barcelona. A citizen of the world. If France needs me, I go to France. If Catalonia needs me... well, here I am. I aim to serve. The immigrants are beneath contempt, and what’s more they all stink. So much immigration explains this constant look of disgust on my face that you see in the papers and on TV.

K.- In any case, France doesn’t seem to have been too upset after you left... In fact, they say that whenever the French meet Catalans they invite them to have a drink.

MV.- The French have had four important men in their history - Picasso, Aznavour, Raymond Poulidor, and Manel Valls. The rest were all crap. And of these other three great men I’m most like Poulidor, "Pou-Pou", the great French cyclist. He never won the Tour de France, although he was close each time – he was in second place three times, and in third place five times. He was loved for his failures. But greatness, in spite of that, came to him - from outside France! Because he did in fact win one great race – the Tour of Spain, in 1964!

K.- What happened to the Citizens’ Party, the party you were representing when you stood for election?

K.- The Citizens’ Party, the right-wing party that financed your campaign.

MV.- Oh, I had no idea who they were. They told me that they were a party of the political centre with progressive views. And that they’d pay me handsomely.

K.- Why don’t you like the Catalan independence supporters?

MV.- I do not know. Maybe because I was in France for a bit. There they are very chauvinistic.

K.- No other reason?

MV.- Oh, yes. You see, I’m a universalist. These pro-independence people want more countries in the world, and I don’t want any. My ultimate aim is to rule the world. But I don’t intend to stay long in this insignificant city in a peripheral Spanish region.

K.- So you won’t be staying here on the opposition benches in the Catalan Parliament?

MV.- Well, I'm being well paid at the moment, so I intend to hang around for now... however, if the United States asks me to give them a hand, ah, alors... I’ll maybe change my mind, Or China... they’ve been trying to persuade me for a long time now...

K.- From what you say, it seems that you are needed everywhere...

Pietro Salmonari was a goatherd. He lived in such a dry, rocky part of the Italian south, that the goats produced cement instead of milk. The poor man was not very happy, and his wife even less so, and his seven children even less so than even less so. Not surprising really. One day, his eldest son, Marco Salmonari, stole three goats from his father, sold them, and with the money bought a ticket to the USA. Ten years later, Marco was still eating rocks, or, since he was living in New York, he was in fact eating paving stones. He was so angry that he’d beat up his wife every two or three days so that she’d end up in the emgergency ward.
Tonino Salmonari, Marco’s son, was a very sensitive teenager and he disliked seeing how his father mistreated his mother, especially because he was the one who had to take her to the Hospital and wait for all her bruises to appear. One day, he stole an axe, went home, and depacitated both his father and his mother. The local mafia boss was quite impressed by the lad’s skill and gave him work. Tonino was lucky. He was an excellent murderer and rose steadily within the Mob. He married a blonde who was an outright slut but had a redeeming feature in that she too was Italian. They bought a house with a pool. He was happy He was the first Salmonari to be happy in three generations. But it didn’t last long. The blonde did not want to get pregnant with Tonino’s child, and on finding that she was expecting immediately sought an abortion and left Tonino. He wanted to kill her, but she had everything planned and she escaped with a millionaire from Kansas with blonde hair, who was even more stupid than the donkey of the Republicans. The millionaire believed the blonde’s story and to save her from falling victim to the murderous Tonino, he bought a castle in Italy. In Northern Italy.
Every summer, the millionaire spent his holidays in Italy and for the rest of the year, the blonde of relaxed principles brought up a child that she had produced a year after meeting the millionaire, who believed it to be his son. We do not know the name of this child. We only know that he was very fond of politics and weapons and that though living in the north he was more from the south in his ideology, which was basically not to allow immigrants into Italy. And now that you’ve heard this tale, who wouldn’t admire the Minister of the Interior of such a country?


HISTORY
There was time, when groups of English people, the best of each family, emigrated to strange lands. They were fugitives, or ex-prisoners, or drunks, or just scum in general, who, when they reached the American continent, met the very best of the French and the Spanish descendents of Columbus. All in all it was one big shitheap. Because these splendid Europeans felt the lands they had occupied were not big enough, and America was all theirs, and what’s more because they had gunpowder, they set about killing the original population, a wrinkled brown-skinned people who killed buffalo and wore feathers on their heads.

We know them as Indians, though that’s not what they called themselves. But it doesn’t really matter now as they’ve mostly been eradicated. Later, when there were no longer enough Indians to kill, the English, French and Spanish emigrants fought each other. It was a kind of natural selection process, where the strongest survives and the weak get splattered. Those that lived to tell the tale were the best, and the strongest. Veritable gorillas with generous male attributes, but, more importantly, armed with pistols and rifles. Over time, these gorillas divided into different branches. Among them are the Mafia, Kansas farmers, television preachers, and the KKK, and a long etc. One of the most important branches, typically white and once headed by a paranoid actor, and whose symbol is a rifle, now has as its current President a large gorilla with dyed yellow hair. His name is Trump. They each have a short name so that they can understand their name when they are called.

This gentleman, voted by many other gorillas, descendants of European people, has declared a war on immigrants. Individuals from populations that have always lived in America are not wanted in America. Currently America is gorilla territory.