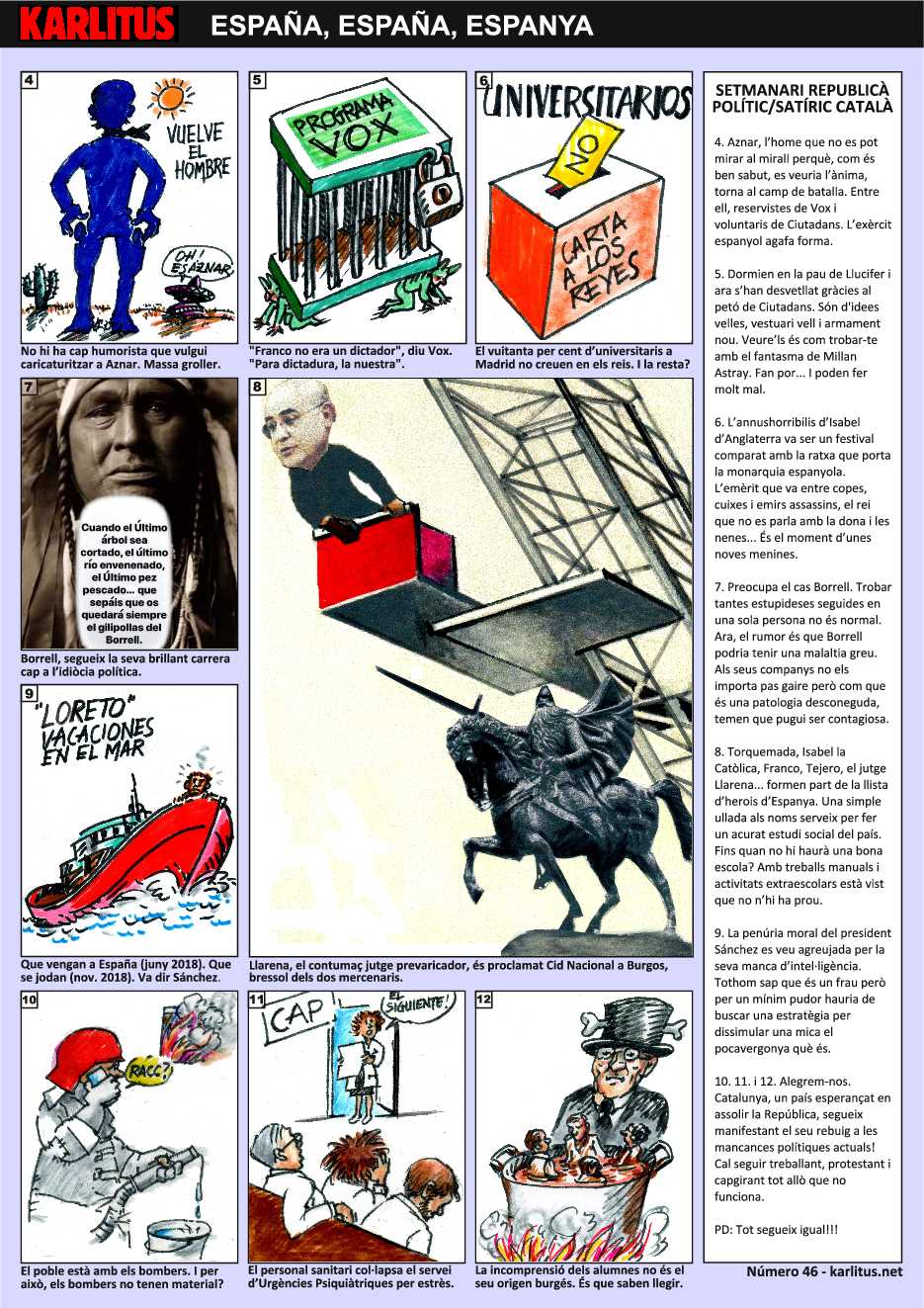 VIGNETTE 1.
Form one tyranny to another. I’m going to eat you all up because I’m more powerful than you are. The Russian bear challenges European wildlife. The result does not matter to anyone except the Ukrainian elk that will be slaughtered and devoured. The same thing they did with their neighbours when THEY had power over them.
1.- George Orwell mercilessly describes the corruption of power. What he did not know is that fifty years later, the world would indeed become a farm, or even worse, a zoo full of wild animals.

VIGNETTE 2. Text: The Buenos Aires football supporters.
The Argentinian fans prove that they are not just a pack of animals. They also have a political conscience and have shown it on the arrival of G.20.
[Note: (Wikipedia) The 2018 G20 Buenos Aires summit was the thirteenth meeting of the Group of Twenty (G20 – i.e. twenty participating states), which was held on 30 November and 1 December 2018 in the city of Buenos Aires, Argentina. It was the first G20 summit to be hosted in South America.] [Note: 25-11-2017: Prior to the Superclásico match, the second leg of the Copa Libertadores, River Plate fans attacked the Boca Juniors team bus with missiles and tear gas. The match was postponed, and the newspapers speculated that politicians such as Theresa May and Donald Trump could be attacked in the G20 meeting beginning on 30-11-1017].
2.- It seems that the media were wrong to talk about football violence – what happened was in effect a new form of the tango, the famous Argentinian dance with its sudden syncopated movements. So let the truth be told - the tango was the reason for the postponement of the match.

VIGNETTE 3. Text: Europe and the new Silk Road, and Spain and the new Ham Road. [Note: a leg of ham is supposed to be a typical Spanish product but is perhaps more indicative of its backwardness sociologically, economically or politically].
Whether intentionally or because of the inability to act otherwise, Spain is still different from the rest of the world. [Note: In the dictatorship, a campaign to attract tourists to Spain used the slogan ‘Spain is different’ (since it had bullfighting, flamenco dancing, cheap alcohol, etc), but for anti-Francoists the slogan is understood as ‘different because Spain is anchored in the Francoist past’].
3.- In the era of technology, Spain and China sign an agreement to export Iberian pork. Was it Marco Polo who said you can’t make a silk purse out of a sow’s ear?

VIGNETTE 4. Text: The Return of a Great Man. Oh no! It's Aznar.
[Note: an ex-prime minister of Spain of the right-wing Partido Popular, with views even more right-wing than those of his own party, or nowadays his ex-party].
There is no cartoonist who wants to draw Aznar. He’s too repugnant.
4.- Aznar, the man who cannot look in the mirror because - as everyone knows - he would see his own soul, has returned to the battlefield. Between him, the reserve army of the Vox Party and the volunteer soldiers of the Citizens’ party, the new Spanish force of Conquistadors is taking shape. [Note: Aznar reappears from time to time to air his right-wing views on the destiny of Spain. The Spanish right is now divided between three parties – but together they form a majority in intended votes in the Spanish state at present].

VIGNETTE 5. Text: The manifesto of VOX.
Franco was not a dictator, says the godfather of Vox. So there was no dictatorship. However, not to worry, folks - a dictatorship is on its way - ours.
5.- They have been sleeping guarded over by Lucífer but now they have been awoken by the kiss given them by the Citizens’ Party. Full of rancid ideas, they dress in clothes from the past but are armed with new weapons. It’s like seeing the ghost of Millan Astray. They are terrifying ... and they can do a lot of evil. [Note: (wikipedia) José Millán-Astray y Terreros (July 5, 1879 – January 1, 1954) was a Spanish soldier, the founder and first commander of the Spanish Foreign Legion, and a major early figure of Francisco Franco's Spanish State.]

VIGNETTE 6. Text: University students. No!. Letter to Father Christmas [Note: In Catalan tradition, The letter is for the Three Wise Men of the Orient.]
Eighty percent of university students in Madrid do not believe in Father Christmas. And the rest?
6.- The annus horribilis of Queen Elizabeth of England was a quiet afternoon tea compared to the upheavals in the Spanish monarchy. There is the spectacle of the ex-king, now devoted to wine, women and murderous emirs, and the reigning king who does not talk to his wife and daughters. And his brother-in-law was sent to a prison (albeit a luxurious one) in June for six years for tax fraud and embezzlement.

VIGNETTE 7. Text: When the last tree is cut down, the last river is poisoned, and the last fish caught, all is ot lost – we’ll still have that superannuated cretin Borrell. Borrell’s brilliantly idiotic political career shows no sign of coming to an end, in spite of his 71 years on this earth.
7.- The case of the Foreign Minister Borrell case is rather worrying. So many idiotic actions one after the other is hardly normal. The rumour now is that Borrell might have a serious illness. He’s not really bothered about his fellow-socialists but they ought to worry for their own sake – his unidentified ailment could turn out to be highly contagious.

VIGNETTE 8.
Llarena, the valiant Spanish judge and indomitable defender of an eternally united Spain, is proclaimed the successor to El Cid. A statue in his honour is erected in Burgos next to the original – so now we can contemplate the two metallic mercenaries together. [Note: (wikipedia) Rodrigo Díaz de Vivar (c. 1043 – 10 July 1099) was a Castilian nobleman and military leader in medieval Spain. He was born in Vivar, a town near the city of Burgos. After his death, he became Castile's celebrated national hero and the protagonist of the most significant medieval Spanish epic poem, El Cantar de Mio Cid.] [Note: Llarena is the Spanish judge intent on jailing pro-independence politicians for their temerity in not believing that Spain is One, Great and Free, as the dictator Franco defined it].
8.- Torquemada, Isabel la Católica, Franco, Tejero, Judge Llarena... these are all heroes in Spain. But just looking at the names is enough to understand the country without having to do a detailed sociological study. When will the education system be up to scratch? Filling up the curriculum with non-academic subjects and relying on extracurricular activities is not really the way to educate The young. [Note: (wikipedia) Tomás de Torquemada (October 14, 1420 – September 16, 1498) was a Castilian Dominican friar and first Grand Inquisitor in Spain's movement to homogenize religious practices with those of the Catholic Church in the late 15th century, otherwise known as the Spanish Inquisition]. [Note: Tejero (born 1932) is a former Lieutenant Colonel of the paramilitary Guardia Civil who was the most prominent figure in a failed fascist coup d'état in Spain in 1981].

VIGNETTE 9. Text: Loreto, holidays at the seaside.
They should come to Spain. (June 2018). They should get lost. (November 2018). Sánchez! [Note: Loreto, a Valencian fishing boat that picked up migrants at sea in grave danger of drowning and was refused permission to bring them to the Spanish state, although in August Sánchez had given permission for a rescue boat with rescued migrants from Dafur, which Italy had refused to accommodate, to dock in Spain].
9.- The moral ambivalence of President Sánchez is aggravated by his lack of intelligence. Everyone knows he’s a fraud, but he really should find a way of disguising his terrible posturing, even if only minimally.

VIGNETTE 11. Text: CAP (= health service clinic). Next one!
Health workers overwhelm The the Psychiatric Emergency service because of stress.

VIGNETTE 12.
The students' lack of understanding is not because of their bourgeois origin. It's that they know how to read.

10. 11. 12.- Let us rejoice. Catalonia, a country hoping to soon become a Republic, continues to show its rejection of current political shortcomings! We need to continue working, protesting, changing everything that does not work.

Footnote. – Plus ça change, plus c’est la même chose! The more things change, the more they stay the same!