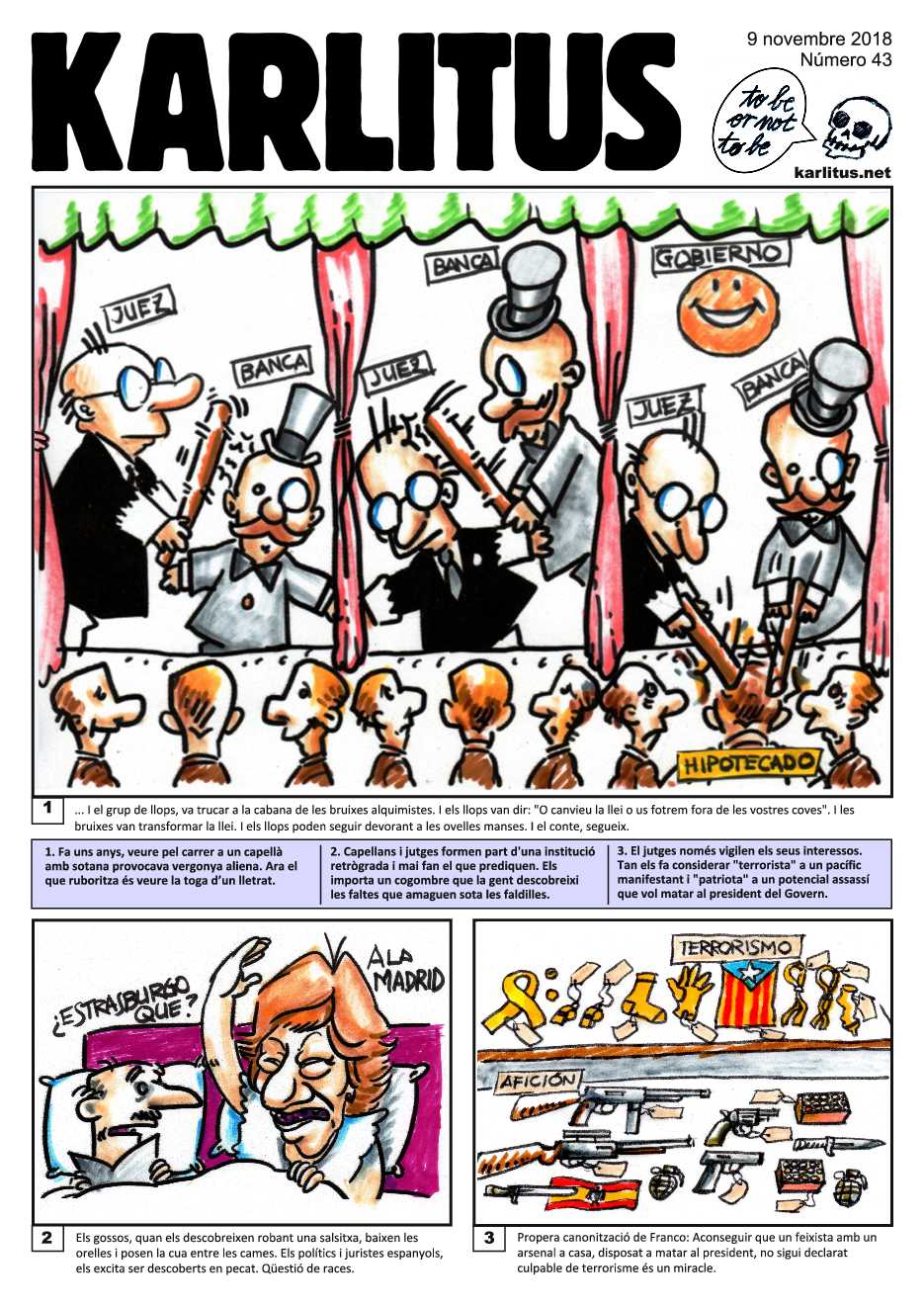 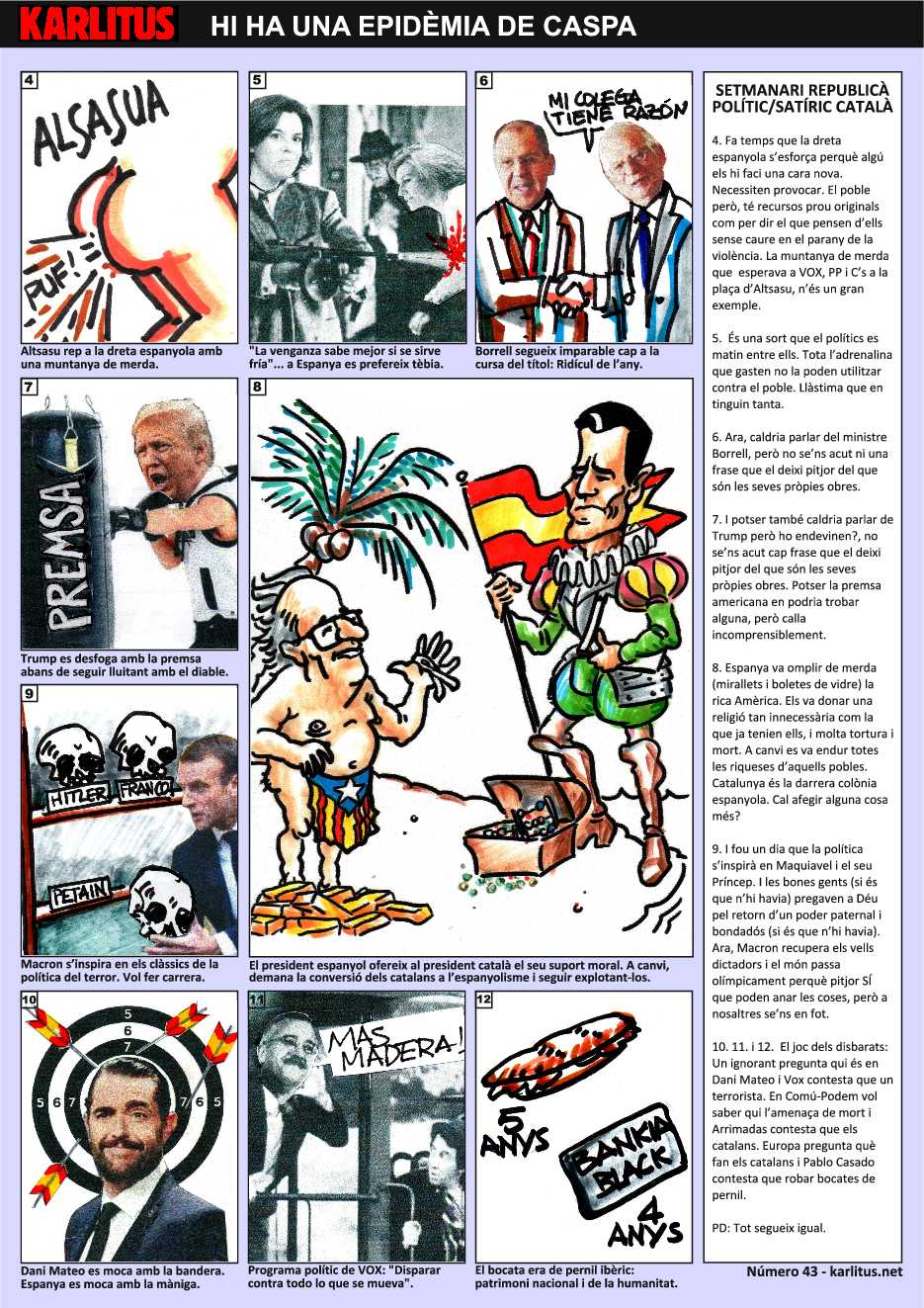 VIGNETTE 1.
… And the group of wolves called at the hut of the alchemist witches. And the wolves said: "Either change the law or we’ll turn you out of your caves." And the witches transformed the law. And the wolves can continue to devour the tame sheep. And the story continues.
1.- A few years ago, people would feel pity to see a priest in his cassock. Now people feel shame when they see a judge in his legal robes.

VIGNETTE 2.
The dogs, when they are caught stealing a sausage, lower their ears and put their tail between their legs. It excites Spanish politicians and judges to be discovered committing a sin. It’s a question of ethnicity.
2.- Priests and judges are part of an institution. It doesn’t matter a jot to them what dark secrets they keep hidden under their cassocks and togas.

VIGNETTE 3.
Very soon Franco will be declared a saint by the Vatican – yet another miracle through the intersession of the dead dictator. A fascist with an arsenal of weapons at home who declares he’s planning to kill the president of Spain is declared innocent of all charges by the judge.
3.- The judges only look after their own interests. It’s all the same to them if they send a peaceful demonstrator to prison under the pretext that he or she is a "terrorist" or that they don’t prosecute a potential assassin who has stated that he intends to kill the president of the Government.

SECOND TITLE PLAN: THERE IS AN EPIDEMIC OF RIGHT-WING DETRITUS.

VIGNETTE 4.
Altsasu welcomes the Spanish right with a great heap of manure.
4.- For a long time the Spanish right tried to get their enemies to attack them physically. They thrive on provocation. But the people are sharp enough to let them know what they think of them without falling into the trap of violence. The pile of manure awaiting VOX, PP and C's in the village square in Altsasu is a good example of this. [Note: the right-wing neo-Francoist parties have a penchant for visiting localities in Euskalherria and Catalonia where they are abhorred in the hope that the inhabitants will attack them physically and so they might justify their claims that pro-independence supporters are “terrorists” and bring them before the courts for their “terrorist violence”.]


5.- We’re lucky that the politicians are at each other’s throats. They use up all their adrenaline fighting among themselves and then they can’t use it against the people. Too bad that they have so much of it.

VIGNETTE 6.
Borrell is unstoppable in his quest for the title of ‘The Most Ridiculous Act of The Year’.

6.- Now it’s time to talk of the Foreign Minister Borrell. But there’s no need for us to point out how pitiful and repulsive he is as he makes it abundantly clear through his actions.

VIGNETTE 7.
Trump vents his anger at the press before continuing to fight with the devil.


7.- And maybe we should also say a word or two about Trump, But guess what? There’s no need for us to point out how repulsive this man is as his own actions make it quite clear. Perhaps the American press could describe him as he really is, but incomprehensibly it stays silent.

VIGNETTE 8.
The Spanish president offers his moral support to the Catalan president. In exchange, he demands that Catalans undergo a conversion and become Spanish nationalists, and let themselves be exploited as they’ve always been.


8.- Spain swamped the rich America continent with shite (or more exactly, mirrors and glass beads). It gave its population a totally unnecessary religion when they already had their own, and brought them gifts in the shape of horrifying torture and death. And in return for these splendid presents Spain spirited away the wealth of the peoples it had mistreated. Catalonia is Spain’s last colony. Need we say anything more?

VIGNETTE 9.
Macron is inspired by the politics of terror. He wants to make a career of it.


9.- And politics was inspired by Machiavelli and his Prince. And the good people (if there were such people) prayed to God for the return of a fatherly and benevolent power (if such existed). Now, Macron brings back the old dictators and the world turns a blind eye. Things could be worse. For us. And they are.


VIGNETTE 10.
Dani Mateo wipes his nose on the flag. Spain wipes its nose on its sleeve.

VIGNETTE 12.
The sandwich was made with Iberian ham: a masterpiece of creative genius which is part of Spain’s and humanity’s heritage.

10. 11. and 12.- The nonsense game: An ignorant fool asks who Dani Mateo is and Vox answers that he’s a terrorist. [Dani Mateo is a comedian who, in a humorous sketch, wiped his nose on the Spanish flag, and was charged with insulting the Spanish flag]. En Comú-Podem want to know who has sent him death-threats and Arrimadas replies it was the Catalans. Europe asks what the Catalans are doing and Pablo Casado replies that they’re stealing ham sandwiches.

PD: Everything is the same.