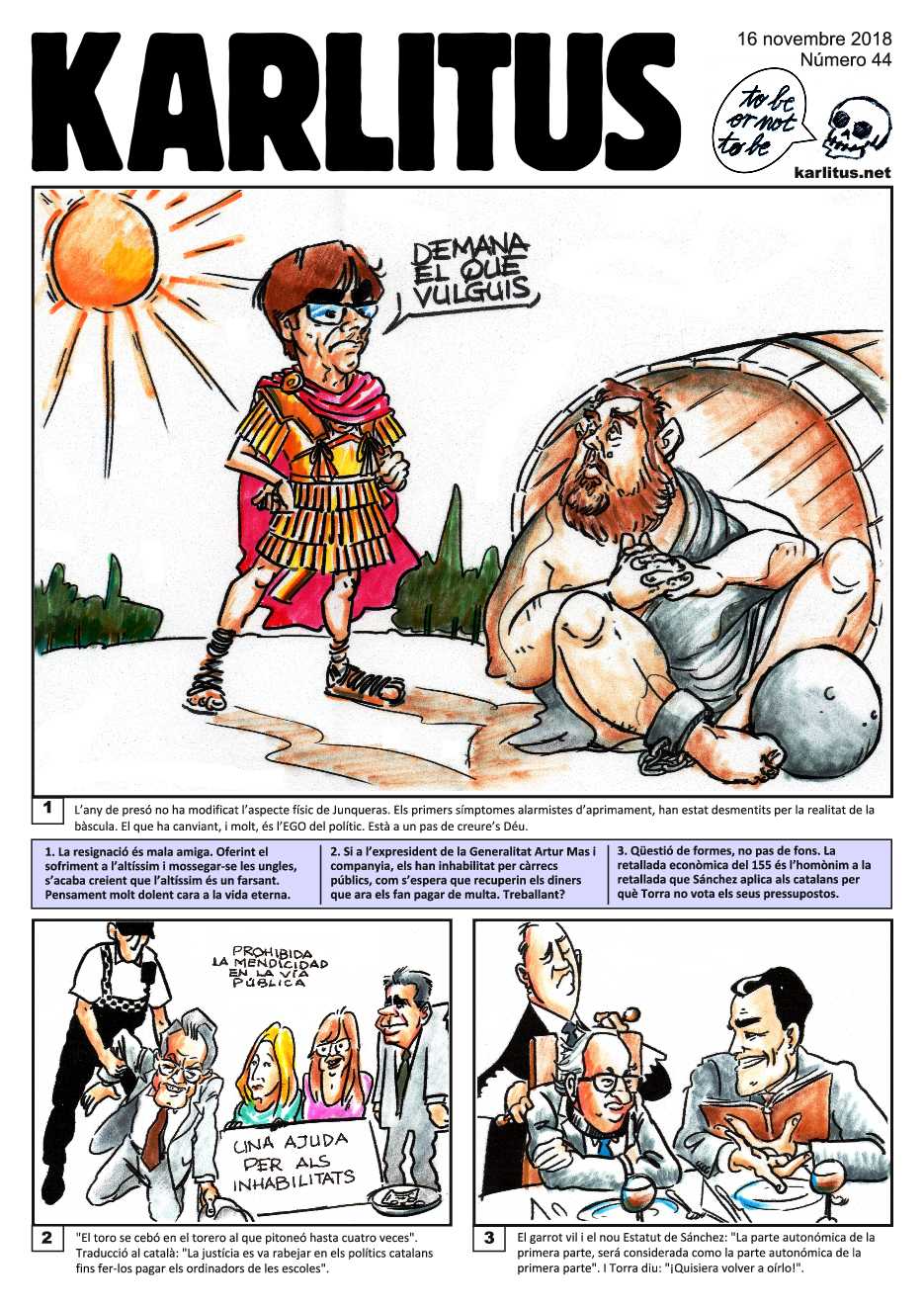 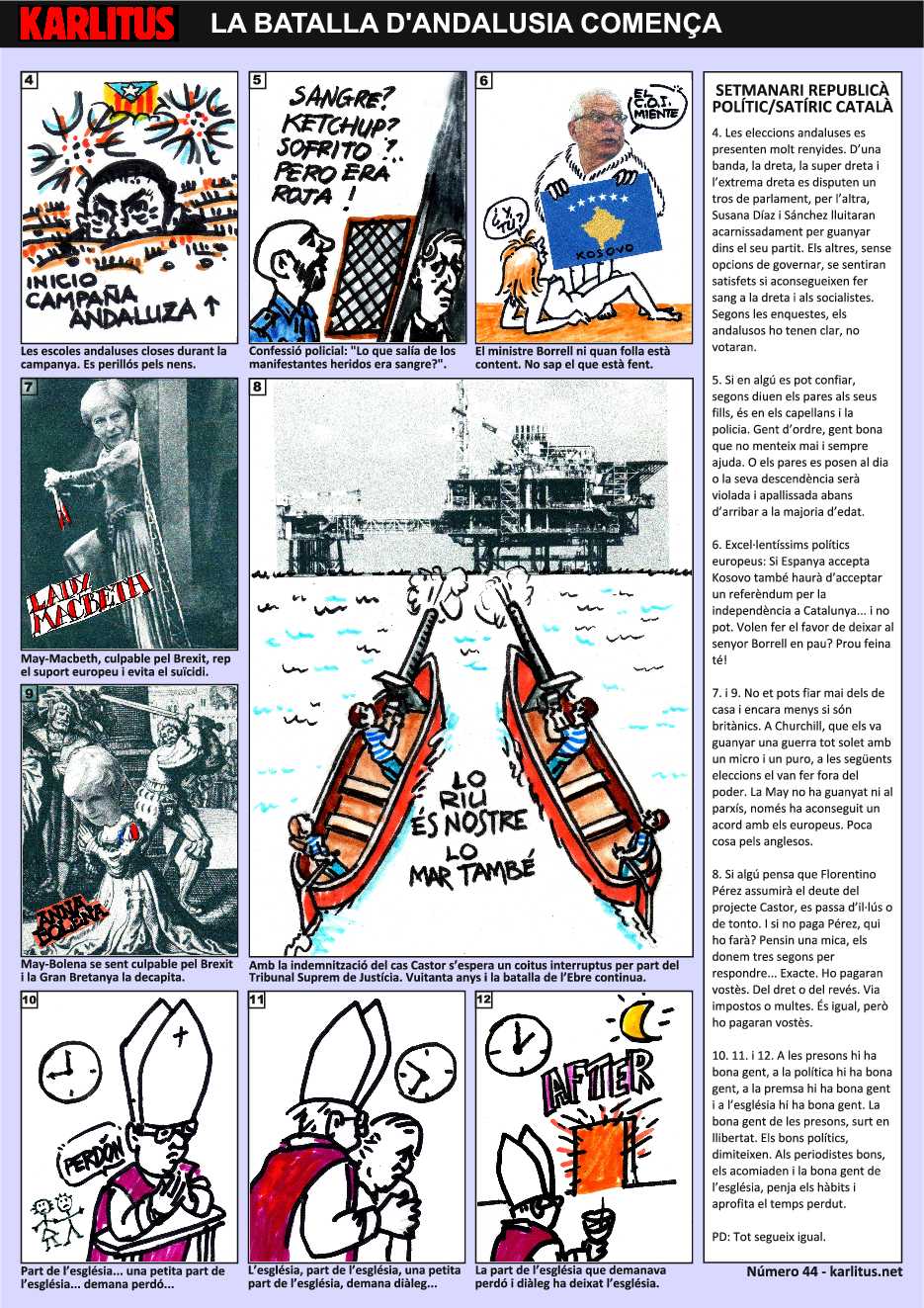 Keywords : Artur Mas convicted. The garrotte and the new statute. Torra’s no to the budget. Andalusian elections. Foreign Minister Borrell. Theresa May. Brexit. The Church. Puigdemont. Junqueras
Previous
Next

A year in jail he has not changed Junqueras physically. Fears that he was losing weight were ungrounded and disproved by the bathroom scales. What has changed, and substantially, is this politician’s ego. He is a step away from believing that he himself is Almighty God. [Note: Oriol Junqueras is the Catalan vice-president, one of the political prisioners jailed by the Spanish government. His Catholic beliefs are being put to the test by his imprisonment; there is also criticism of his recent comments on the strategy needed for achieving Catalan independence from Spain].
1.- Resignation is difficult to live with. If you endure suffering in order to win the approval of the Man in the Sky and are biting your nails to the quick, all to no avail, it will leave you thinking that the Lord on High is not as omnipotent as he’s made out to be. You might even begin to lose faith in the idea of Eternal Life.

CARTON 2. Text: Begging prohibited on the street. A small coin if you please for the unfortunate people disqualified from office.

I’m the judge and I’ll twist the law any way I want to. That is to say, the Spanish Judges were so angry with Catalan politicians that they’ve made them pay for the computers used in the schools. [The Spanish judges have stated that they believe computers belonging to the Catalonian government and destined for use in schools were used in preparations for the Catalan referendum. The Catalan government ministers who were forced out of office by the Spanish government will be obliged to pay for these computers themselves).
2. - If the former President of the Generalitat, Artur Mas, and his fellow ministers have been disqualified from public office, how do the judges expect them to get the money from them after giving them heavy fines? Do they expect them to find a real job?

A difficult choice: The garrotte or Sánchez’s new Autonomous Government Statute. The Spanish prime minister explains that he’s agreed with the king, the judges and the military that Catalonia can have a referendum after all, at some distant date, to vote on a new Statute of Autonomy but without any autonomy for Catalonia. The Catalan President Torra is unconvinced. [The garrotte was used as a method of execution in Spain for centuries, and was last used in 1974 to execute a political prisoner].
3.- Arm-twisting. If President Torra does not support the Socialist government’s budget plans for the Spanish state then Sánchez will make further financial cuts in Catalonia as the Spanish government suspends the Catalan Government once again and replaces it with direct rule from Madrid by way of Article 155 of the Spaniards’ Constitution.

MAIN TITLE: MAY THE BATTLE OF ANDALUSIA COMMENCE!

CARTON 4. - Text: The Andalusian regional government election campaign begins.
Andalusian schools are closed during the campaign. It’s too dangerous for the children.
4. - The Andalusian elections are hooting up. On the one hand, the right-wing, the more right-wing and the extreme right-wing are fighting each other for their part of the parliament. [Note: the PP, Citizens and Vox parties] On the other hand, Susana Díaz and Sánchez are fighting hard to for the leadership of the Socialist Party. The other parties have no chance of of governing and will be happy if they can inflict small wounds on the right-wing parties and the socialists. According to the polls, the Andalusians have no doubt about what to do. They’ll not vote in these elections.

CARTON 5. - Text. - Blood? Ketchup? A Catalan wine from El Priorat? Whatever it was, it was red!
Police Confession: Father, I have told an untruth. The red liquid which bled from injured Catalan voters was indeed blood. [Note: A policeman in court in an investigation into the use of police violence on peaceful voters in the Oct 1 referendum in 2017 says he cannot be sure if the blood on the faces of beaten voters was not in fact red ink.]
5.- Parents tell their children that you can always trust priests and police officers. They are exemplary members of society who never lie and are always ready to help. Such parents should get up to date as soon as possible or else their kids will be raped and savagely beaten because of mummy and daddy’s’ inadequate advice.

CARTON 6. - Text. - The International Olympic Committee is lying! And you?
Foreign Minister Borrell is only happy when he’s in a rage. What’s more, his middle name is Incompetence. [The Spanish state does not recognise Kosovo as an independent state, and had refused to allow athletes from Kosovo to compete in the Mediterranean Games in Tarragona in Catalonia. When it was pointed out that this infringed the rules of the International Olympic Committee and could mean that Spain would be barred from future participation, the Spanish Government made an abrupt about-turn and allowed the athletes from Kosovo to compete.]
6.- My dear European politicians - if Spain accepts the existence of Kosovo as a separate state, it will also have to accept a referendum for independence in Catalonia ... but this was never the intention of General Fanco, and so will never be possible. But it’s perhaps better not to bother the Spanish Foreigh Minister Borrell, who’s very busy with his mission to keep Spain intact and to persuade the world of Spain’s infinite glory and superiority.

CARTON 7
Theresa Brexit May, or the English Lady Macbeth. When Europe finally supported her in her plan to create a Glorious Little England, she managed to avoid suicide off-stage in the last act of the play.

CARTON 8. Text. - The river is ours. And so is the sea.
With the compensation paid by the Spanish government in the Castor case, the Spanish Supreme Court of Justice has coitus interruptus. Eighty years on and the Battle of the Ebro continues. [A failed investment in an under-sea gas storage project named ‘Castor’, by a businessman, Florentino Pérez, linked to the PP party, was to be compensated by the Spanish government using public money. An unexpected court decision refused to allow this arrangement to continue. The gas rig was situated in the sea by the estuary of the Ebro river, where the Fascist forces defeated the Republican military in a battle in 1939. The PP is in essence a continuation of the fascist forces of the 1936-1939 war].
8. - If someone thinks that Florentino Pérez will pay his debts incurred in his Castor project they must be weak in the head. Yet if Pérez doesn’t then who will? See if you can guess the answer in just five seconds... Correct! We’ll all be paying for it ourselves. Every single cent. The government will tax us and fine us until Mr. Pérez’s lost investment has been repaid in full.

CARTON 9
Anne Boleyn (1501- 1536) Queen of England from 1533 to 1536 as the second wife of King Henry VIII. Beheaded by her husband. Theresa May, Prime Minister of the United Kingdom, about to be beheaded by the Little Englanders in the Tory Party for not standing up to Johnny Foreigner.
7.- 9.- You just can’t trust people even when you do all you can for them, and this is especially so with the English. Mr Churchill single-handedly won the war for them with only a microphone and a cigar, but in the elections after the war his Tory government was voted out of power. Theresa May needs only to reach an agreement with the Europeans but whatever the agreement is, the English will be ungrateful as usual.

CARTON 12
The small part that wanted forgiveness and talks has now left the church.

10. 11. 12. - There are good people to be found in all situations - in prison, in politics, in the media and in the Catholic Church. Good people who are imprisoned are released. Good politicians resign. Good journalists lose their jobs, and the good clergy hang up their ecclesiastical garb and make up for lost time.

Footnote: Everything stays the same.