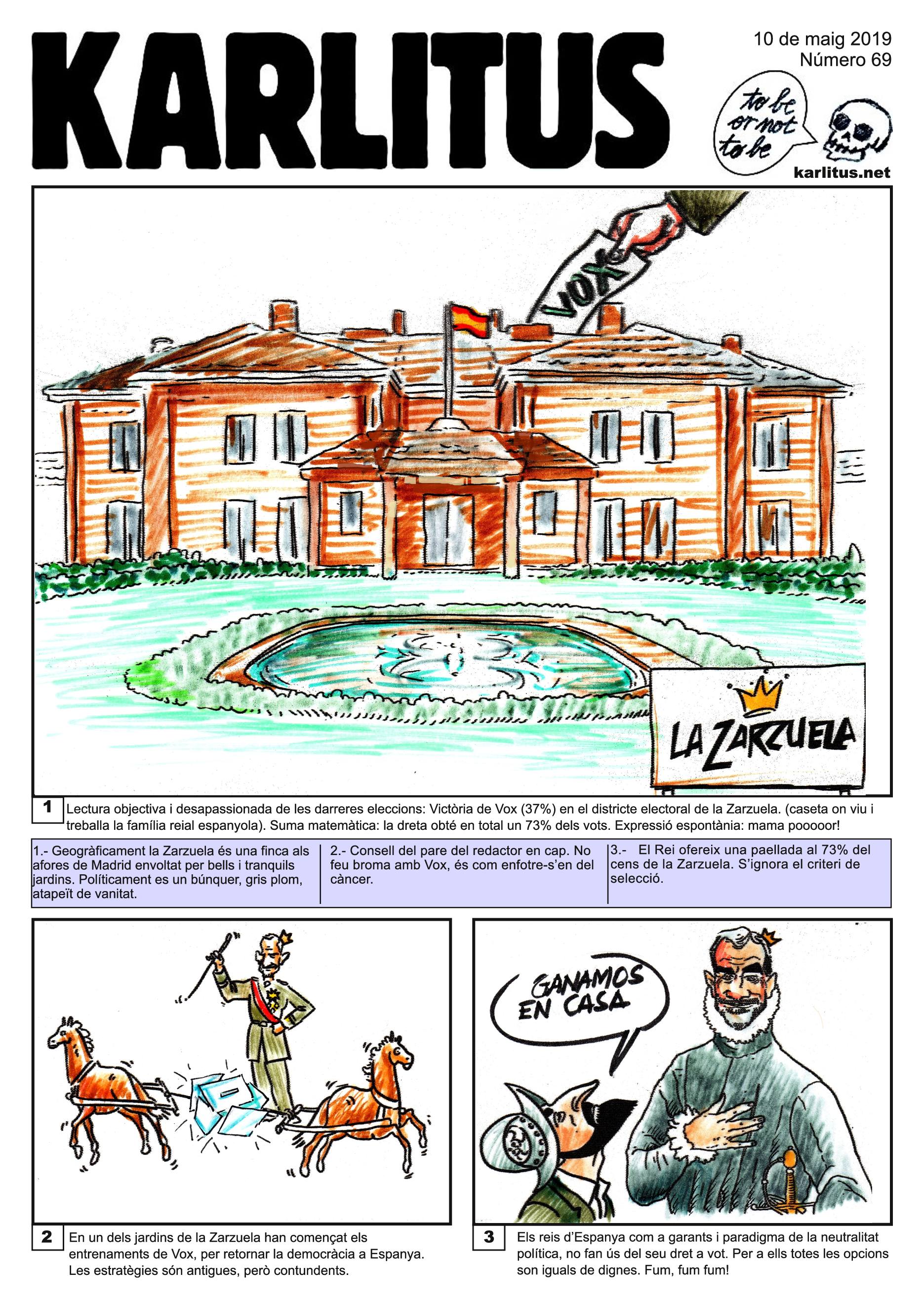 Political/satiric republican weekly of Catalonia
21 may 2019

A cold objective reading of the results of the last elections: a victory for Vox (37%) in the Zarzuela electoral district (the little cottage in which the Spanish royal family lives and works). And adding to this the votes for the other right-wing parties, the right gets 73% of the total votes. “Zona nacional”. [Note: the areas which supported the Fascists in their military attacks on the legitimate Republican government, and were under their control in the War of 1936-1939, were called the ‘national zone’ by the Fascists].


1.- Geographically Zarzuela is an estate on the outskirts of Madrid surrounded by peaceful attractive gardens. Politically, it is a bunker, leaden grey, full of empty and vain individuals.

In one of the gardens of the Zarzuela Vox has begun its military training, preparing to restore democracy in Spain. The strategies are age-old, based on blunt force.

2.- The father of the editor-in-chief offers a word of advice – don’t joke about Vox. It's like making jokes about cancer.

The King and Queen of Spain are well-known as guarantors of political neutrality and do not make use of their right to vote. There’s no need. It makes no difference whoever gets voted into power because the monarchy is in charge of the state and always has the last word.


3.- The King of Spain throws a party for 73% of the people on the electoral list for the Zarzuela ward. The basis for choosing the guests is unknown.

SECOND TITLE PLAN: HOW DO THEY DO IT?

VIGNETTE 4. Text: Junts per Catalunya [pro-independence centre party].
I
f they do not play together, they make a mess of things, but they are innocent and hesitant and a little bit afraid.

Strong, nimble, confident. Like teenagers who know they are in possession of the absolute truth.

VIGNETTE 6. Text: La Cup [pro-independence left party].
No inhibitions. Rather than an orgasm, they are more aware of close social bonds.

Classics. With all the precautions, it’s certain that the couple will have a great time.

Worn out. A final party full of despair. They'll never get the chance do it with the people who are in power.

With racial variations, testing toys they've been given. Yes... but no.

They no longer remember how to do it. They know it can be done, but just how?

Why? they ask. They no longer have the strength to do it, and don't recognise each other any more. But they can go around in circles as always.

VIGNETTE 12. Text: Vox [Spanish ultra-nationalist neo-fascist party].
An impossibility. They have gone through life without trying it. On departing this earthly existence they donate their vital organs – or at least, their gonads are donated to Spain.

1 to 12.- EXTRA 0SOIXANTE-NEUF
For a satirical political magazine, reaching edition number 69 is a great success. For a person, 69 is a number which becomes an attractive one if said in French. By chance we have been able to celebrate both producing edition 69 and doing a soixante-neuf and, and there are photos to prove it.

Some sexologists think that a soixante-neuf is a tacit excuse used by couples. It is a way of saying yes, that there is good faith, honourable intentions, dedication and desire, but at the same time it allows activity (as long as the body weight is more or less equal) to proceed at a relaxed pace without strenuous life-threatening exertions. And if you’re told you’re not going fast enough, you can always say that it is for the benefit of your partner because you are slow but thorough. That is to say, a soixante-neuf let’s us tell fibs.

And speaking of fibs and lying, we are duty-bound to mention politics. Indeed, a soixante-neuf resembles the pronouncements of politicians to a great extent. Presumed good faith, dedication, effort, and respect, but without the need to work too hard, the adoption of a comfortable posture and, above all, doing everything at a slow leisurely pace. The promise of love is far away, the culmination of the act is made to wait. However, the politician slowly suffocates the person under him (in this case, the voter) who in good faith has helped him into his present position.
The world is full of myths. Religious myths, patriotic myths, sexual myths... All of them false but the most annoying thing is that these are precisely the myths that condition the fate of people. Children traumatized for touching themselves, boys and girls with sore knees from having confessed to telling so many lies. Young people with their hopes dashed by the powerful, forced not to dream of a better world. Dead children defending a land that is the garden of the powerful... Compulsory pregnancies, forbidden divorces, mental and physical abuse... Man and woman suffer all of this as a result of taking notice of myths. There’s not a word of a lie in all this.

We now end our celebration taking advantage of the fact that our level of alcohol is getting greater and greater, and sixty-nine will soon be seventy. In brief – that’s all we have to say i.e. nothing.