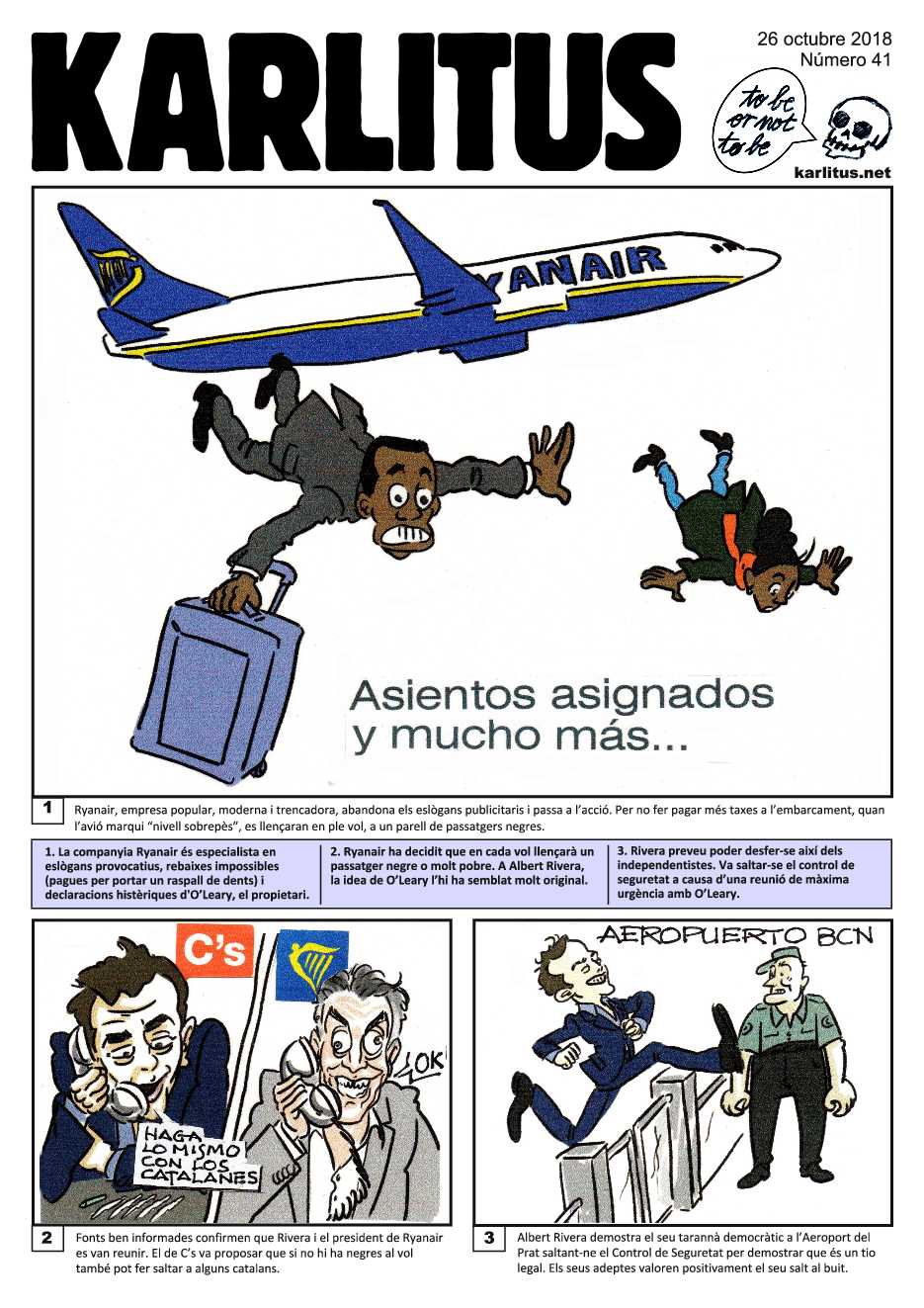 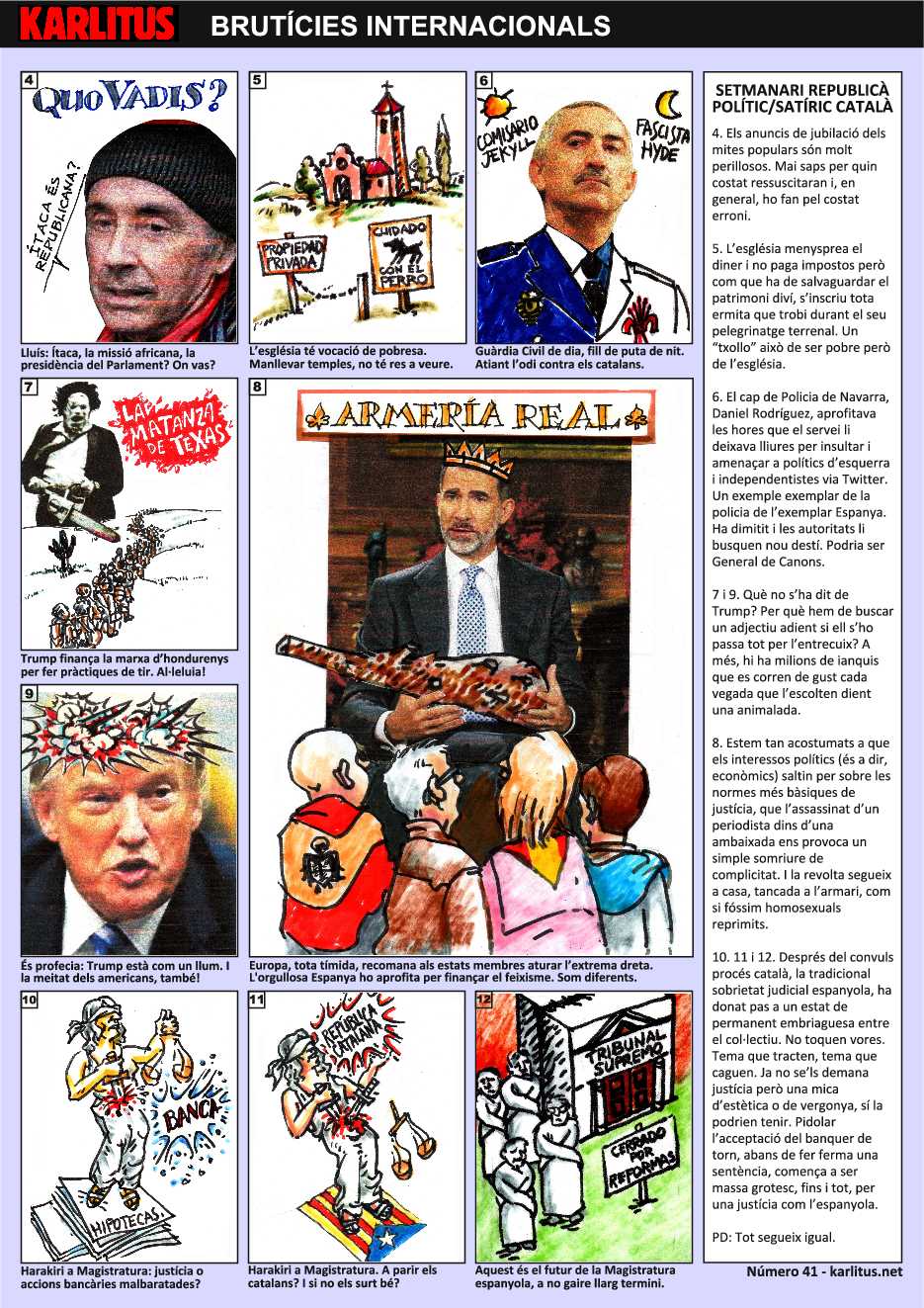 CARTOONS 1.- Text: Assigned seats and much more.
Ryanair, a popular iconoclastic modern company ditches its advertising slogans and goes for deeds, not words. In a move to help people avoid having to pay additional charges before boarding, when the computer indicates that the plane is carrying excess weight a couple of black passengers will be jettisoned during the flight.
1.- Ryanair is an airline that specializes in provocative advertising slogans, and impossibly low prices (that aren’t so low after all when you have to pay a surcharge for carrying a toothbrush in your pocket) and hysterical statements from O' Leary, the airline’s owner. [Note: A white Englishman insulted a 77-year-old black Englishwoman he was seated next to before take-off on a flight from Barcelona to London on 21 October 2018. The Ryanair cabin staff removed the black woman to another seat rather than move the white man who was making racist comments.

CARTOONS 2.-
Albert Rivera demonstrates his democratic credentials at El Prat Airport by avoiding the Security Control which will establish that he was not breaking the law in any way. His followers give a positive rating to his rejection of the obligations of ordinary mortals. [The leader of the far-right Citizens’ Party was allowed by his Spanish state police bodyguards to skip a control to establish that passengers have not been in contact with explosives or drugs. No satisfactory reason for this extraordinary preferential treatment has been given. He is a well-known stickler for law and order, and the need for laws to be scrupulously observed].
2.- Ryan Air has decided that on each flight a passenger will be cast into the void. But they need to be either black or very poor, preferably both. ?O'Leary's idea seems very innovative to Albert Rivera.

CARTOONS 3.-
Well-informed sources confirm that the reason was that he didn’t want to arrive late for a meeting with the Director of Ryanair. Rivera suggested to him that as well as blacks, Catalans could also be be cast into the void.
3.- Rivera plans to get rid of independence supporters using the same method. He skipped the controls as he was pressed for time when wanting to see O' Leary urgently to explain this idea to him.

CARTOONS 4
Lluís: Ithaca, the African mission, the Presidency of the Parliament? Quo Vadis / Where you going?
4.- When prominent people retire, it seems that it’s not for long. They re-emerge to do rather unexpected things, and usually it’s unexpected in the bad sense of the word.
[The album of protest singer-songwriter Lluís Llach which sold most copies was Viatge a Itaca (Journey to Ithaca) in 1975. Since then he has founded the Lluís Llach Foundation in 2011 to undertake aid projects in Senegal. Later he was an MP for the Junts pel Sí pro-independence political alliance, resigning in 2017. On 22 October he was nominated as head of a Forum to lobby for the right for self-determination which critics consider to be a sinecure and of little use in advancing Republican ideas.)


CARTOONS 5.-
The church exists ostensibly to alleviate material and spiritual poverty. Confiscating churches that they no longer own seems to be a lucrative sideline somewhat at odds with their duty to give succour to the poor.
5.-The church despises filthy lucre and thus is exempt from taxes. However, as it has to safeguard its divine heritage in the shape of stones and mortar, it claims possession of all earthly hermitages that it comes across when scouring the land for property it can lay claim to. To live a life of sacrifice and poverty and yet at the same time get rich with no effort is a strange contradiction – that is, if you’re not an ecclesiastic. [Note: The Catholic Church in Catalonia has been claiming former ecclesiastical buildings as church property although it appears they are confiscating property that is in private ownership.]

CARTOONS 6.-
A paramilitary Civil Guard by day, and a slime-ball at night, stirring up hatred against the Catalans.
6.- The Police Chief of Navarre, Daniel Rodríguez, during his working hours spent rather a lot of time on Twitter insulting left-wing politicians and independence supporters. An exemplary and admirable example of a policeman in a state – Spain – which has been a shining example of justice and freedom from 1939 until the present day. He has resigned from his post and the Spanish authorities are looking for another job for him. A security guard in the dictator Franco’s mausoleum maybe?

CARTOONS 7.-
Trump finances the march of the Honduran’s so they can be used for target practice when they reach the US border.
7.- What has not been said about Trump? The problem is that he revels in the names people call him, and takes them to be compliments.

CARTOONS 8.-
Europe very timidly recommends that its member states stop the advance of the extreme right. But the Spanish state, proud of its tradition from 1939 onwards, does the opposite and finances fascist organisations. Spain is different, as the saying goes.
8.- We are so accustomed to the fact that political interests (that is, financial interests) ignore the most fundamental norms of justice that the murder of a journalist in an embassy is seen to be absolutely normal. And in the Spanish state denial of basic rights and a corrupt justice system are also regarded as nothing out of the ordinary, and that thanks to the judges the far right is immune from punishment for its violations of the law.

CARTOONS 9.-
Trump shines like the moon in the night sky – in other words he’s a lunatic. As are half the voters in the USA. !
9.- Lunatic is the scientific definition of the millions of citizens of the Great U.S. of A. who voted for him, and who are ecstatic with jubilation every time they hear one of his idiotic statements.

CARTOONS 10.-
Harakiri in the Law Courts. What is more important – justice, or a fall in the value of the banks’ stock-market shares?

CARTOONS 11.-
Harakiri in the Law Courts. What is more important – a return to 1939 or freedom for the Catalans? I think we know the answer.

CARTOONS 12.-
The immediate future of the Spanish judges.

10. 11. 12.-
After the Catalan independence process, the traditional sobriety of the Spanish judges has given way to a state of permanent drunkenness among them. They can’t do anything right. Anything they do they make a complete mess of. No longer are they asked to dispense justice, but rather to behave less like complete oafs, and to feel if possible a modicum of shame for their misdeeds. Even for something as worm-eaten and rotten as the Spanish justice system asking the Big Banks what verdict is most acceptable to them is quite appalling and grotesque. [The Spanish Supreme Court ruled that banks, not clients, had to pay a duty as part of property transaction costs, and had to compensate the clients who had been obliged to pay it. The banks did not like this at all, and it wasn’t long before The Supreme Court backtracked and reversed its decision].