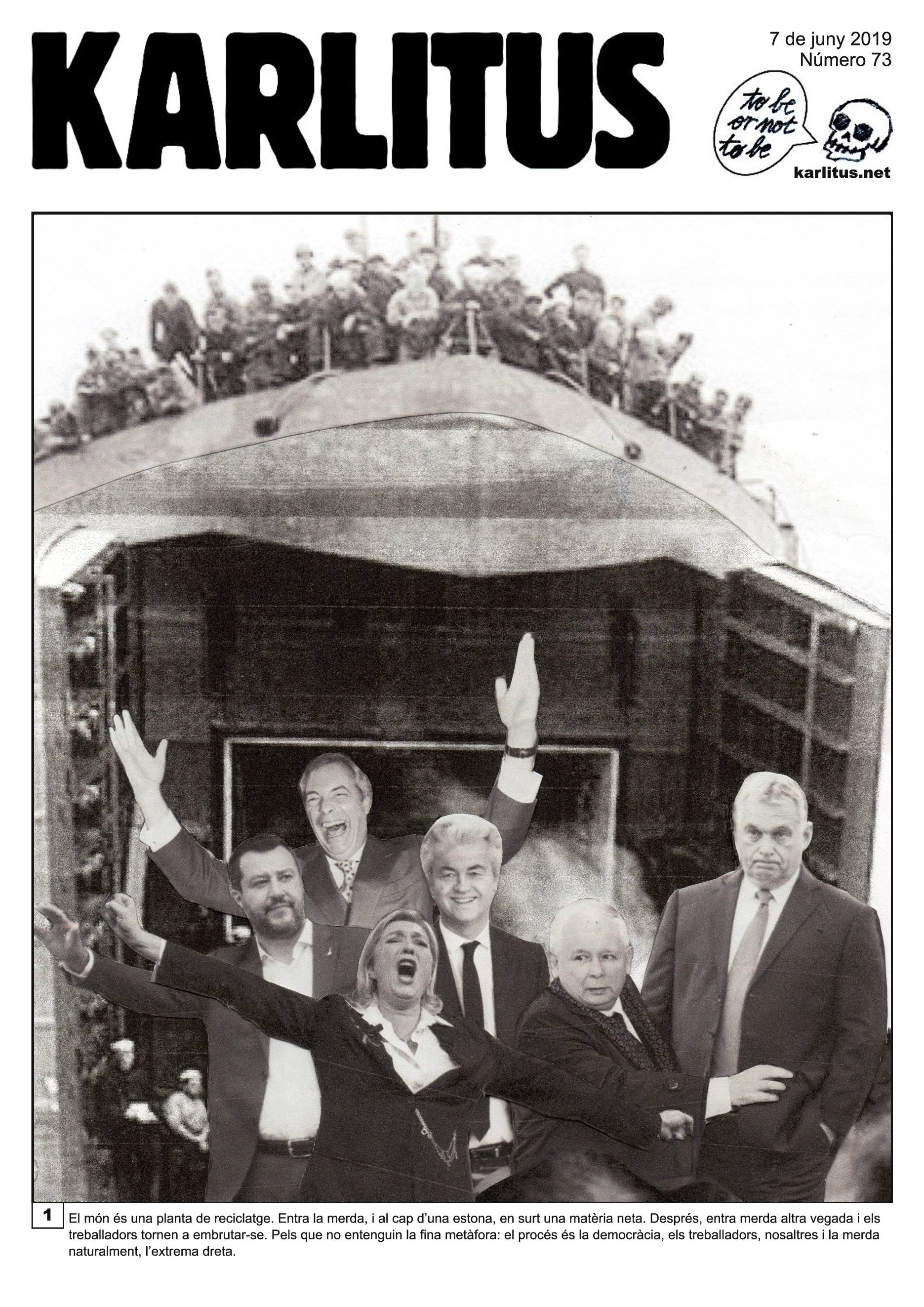 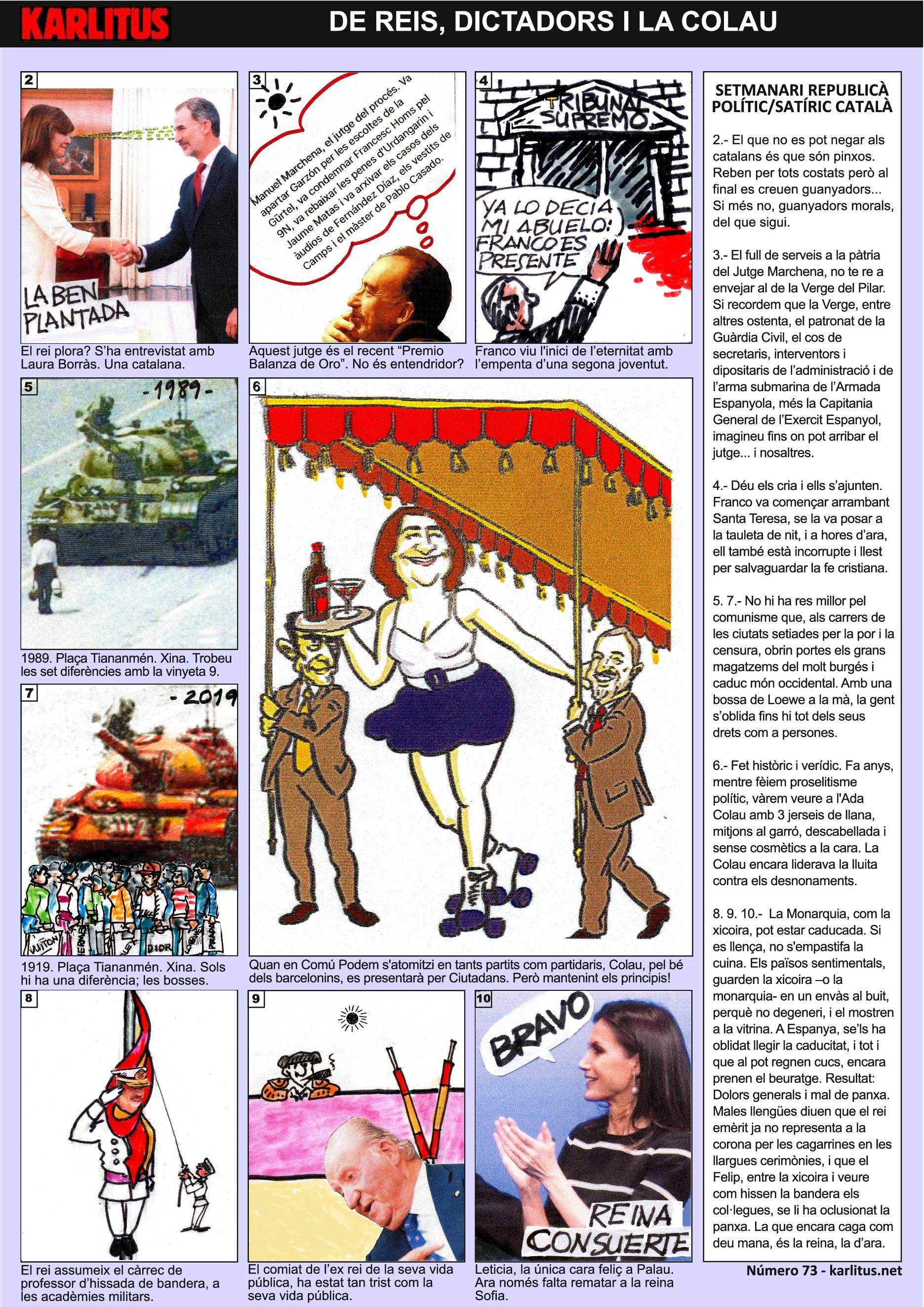 VIGNETTE 1.
The world is a recycling plant. Shit is fed into it, and after a while clean matter comes out. Shit is again fed into it and the workers get filthy again. In short: the process is called democracy, we are the workers, and the shit of course, is the extreme right.

TITLE OF THE SECOND PAGE: OF KINGS, DICTATORS AND ADA COLAU

VIGNETTE 2.
Does the king cry? He has had a short tete-a-tete with Laura Borràs. A Catalan. [Note: As part of a consultation with the Spanish King with the political parties in the Spanish Parliament to form a new government after the general elections, the spokeswoman for the Junts per Catalunya party, Laura Borràs, informed His Spanish Majesty that the Catalans don't have a king, and that the Catalans will never give up their fight for independence].
2.- You can’t deny that the Catalans are persistent, though in essence empty swaggerers. They are beaten and bruised left, right and centre but in the end they believe they’re the winners... At least, morally, whatever the lost dispute may be.

VIGNETTE 3. Speech bubble: Judge Marchena, the judge of the pro-independence Catalans. He removed fellow judge Garzón from the Gürtel case for ordering telephone tapping of the suspects [Note: Garzón is connected with the Socialist party, and the accused in the Gürtel corruption case were members of the Popular Party (PP), with which Marchena is closely connected], he prosecuted Frances Oms for the 2014 referendum [Note: a non-binding Catalan self-determination referendum in November 2014], he reduced the sentences of Urdangarin [Note: a commoner who is a member of the Spanish royal family and who was involved in the corrupt practices of the Spanish monarchy. He was sent to prison on the understanding that only commoners are delinquents and thus saving any member of the royal family from seeing the inside of a jail] and Jaume Matas [Note: a corrupt PP politician, a former president of the Balearic Island government], and dismissed the cases of (1) the (illegal) phone-tapping by (the former PP Minister of the Interior in Madrid), Fernández-Díaz, (2) the suits of Francisco Camps [Note: an ex-president of the Government of València, involved in a corruption case in which expensive suits were used as bribes], and (3) the M.A. of Pablo Casado [Note: The present leader of the PP falsely claimed to have studied for an M.A., which turned out to be a forged qualification awarded to him by the pro-PP King John Charles University in Madrid].

This judge recently received the "Golden Scales of Justice Award." Doesn’t that tell us something about Spain and its justice system?
3.- For services to Spain Judge Marchena is on a par with the statue of Our Lady of the Pillar. If we remember that this Virgin Mary, among her various offices, is the patroness of the paramilitary Civil Guard, of Spanish government civil servants and the Submarine Division of the Spanish Navy, as well as the Spanish Army High Command, imagine what power this judge must have... over us.
[Note: Our Lady of the Pillar (Castilian: Nuestra Señora del Pilar) is the name given to a statue of the Virgin Mary which embodies the traditional belief that Mary, while living in Jerusalem, supernaturally (via a supposed phenomenon of 'bilocation') appeared to the Apostle St. James the Greater in AD 40 while he was preaching in what is now Spain. She appeared on top of a stone pillar which has been preserved in the church built to commemorate Mary's bilocal appearance, her only action of this type, bringing great honour to Spain (though Spain was not constituted until 1429 or 1679 years later, de facto in 1469 and de jure until 1719). Our Lady of the Pillar is known for a miracle in 1640, when through her intercession Miguel Juan Pellicer recovered his leg that had been amputated two years earlier. She is the Patroness of Aragon and its capital Zaragoza, of the Spanish paramilitary Civil Guard, and of Spanishness and the Day of Spanishness, that is, Columbus Day on 12 October, which is her feast day and an official holiday in the Spanish state. In 2012 the Spanish government awarded the statue with a medal, the Great Cross of the Order of Merit of the Civil Guard].

VIGNETTE 4. Text: Supreme Court. Speech bubble: As my Grandad would say, Franco is the here-and-now.
Franco lives the beginning of eternity with the impetus of a second youth.
4.- What God hath joined together, let not man put asunder. Franco began his path to sainthood by putting a statuette of Saint Teresa on his bedside table. As a result his body will never decompose and he is a true soldier of God, ready to safeguard the Christian faith.

VIGNETTE 5.
1989. Tiananmen Square. China. Find the seven differences between this and drawing number 9.
5. 7.- There is nothing better for communism that, in the streets of cities besieged by fear and censorship, new department stores are inaugurated in the style of the opulent but supposedly outdated bourgeois western world. With a Loewe bag over the shoulder, people forget all their rights as citizens.

VIGNETTE 6.
When the En Comú Podem Party began to splits into as many factions as there are members, Ada Colau, for the good of Barcelona, will join the Citizens’ party [Note: The leader of the En Comú Party in Barcelona who vowed not to receive the help of the extreme right-wing Citizen’s Party in her bid to become mayoress, although she was not the most voted candidate, in fact relied on three votes from the six-strong Citizens’ Party to gain the mayorship.] It’s a big jump, but she’ll not be changing her principles!
6.- Facts from the history book. For years, until 2015, while we worked hard as grassroot political activists, we saw Ada Colau wearing three sweaters and woollen socks, with her uncombed hair and her face untouched by cosmetics. She led the movement fighting against evictions. How times change.

VIGNETTE 7.
1919. Tiananmen Square. China. There is only one difference; the expensive bags.

VIGNETTE 8.
The king assumes the position of professor of flag-hoisting in military colleges. [Note: In a ceremony where a gigantic Spanish flag was being hoisted the flag became twisted, which mightily displeased the King of Spain, who had to maintain his salute while the flag was untwisted].

VIGNETTE 9.
The departure of the ex-king from public life has been as sad as his own public life. [The former king of Spain announces that he will not take part in official acts from now on. His reign as king was full of scandal, and he had to be ‘retired’ to give way to his son].

VIGNETTE 10.
Leticia, the only happy face in the Royal Palace. Now all that is needed is to the ex-Queen Sofia to be given the coup de grace. [Note: The dysfunctional Spanish royal family is riven by internal feuds, not least because the King’s wife Leticia is a social-climbing commoner, an ex-TV presenter. Her happiness is due to her stratospheric ascent, but her contentment is tempered by her arch-enemy, Leticia’s most royal Greek mother-in-law].

8. 9. 10.- Text: Royal Consort.
The Monarchy, like a bottle of sour milk, is long past its usefulness, if it ever had any. If you pour it down the sink, you’ll need to flush it away with plenty of water if you don’t want a rancid smell of sour milk to pervade the kitchen. Other countries might put it in an airtight bottle and label it and place it in a museum as an interesting relic of the past. In Spain, they are unable to understand expiration dates, and though the milk is utterly undrinkable, they still drink it. Result: general pain and excruciating stomach ache.
Gossip has it that the ex-king can no longer represent the crown in long ceremonies because he has the shits permanently, and that King Philip, what with all the sour milk and seeing how his soldiers are unable to hoist flags, has permanent indigestion and constipation. The only royal personage who still has a regular bowel movement is the queen, at least for now.