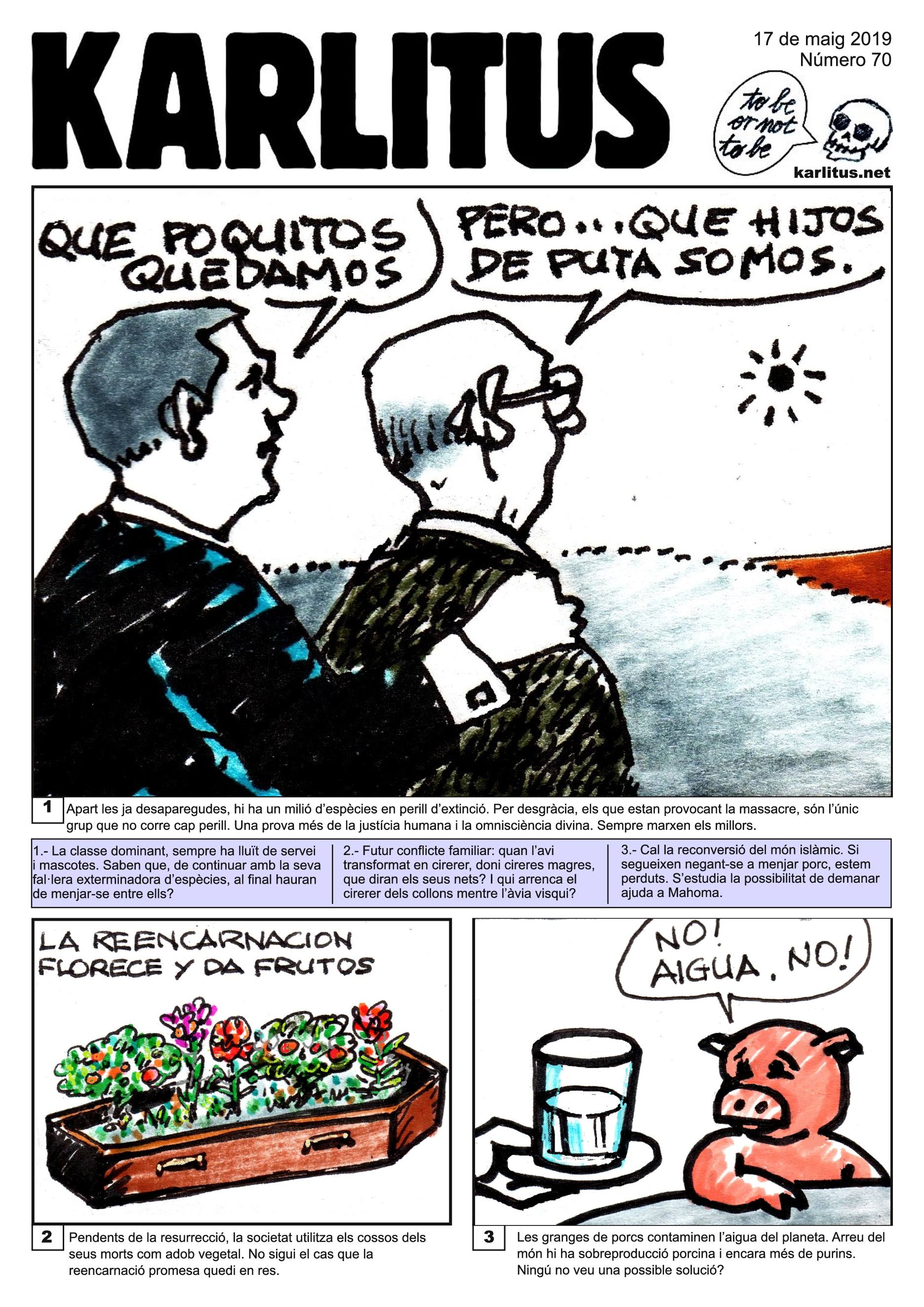 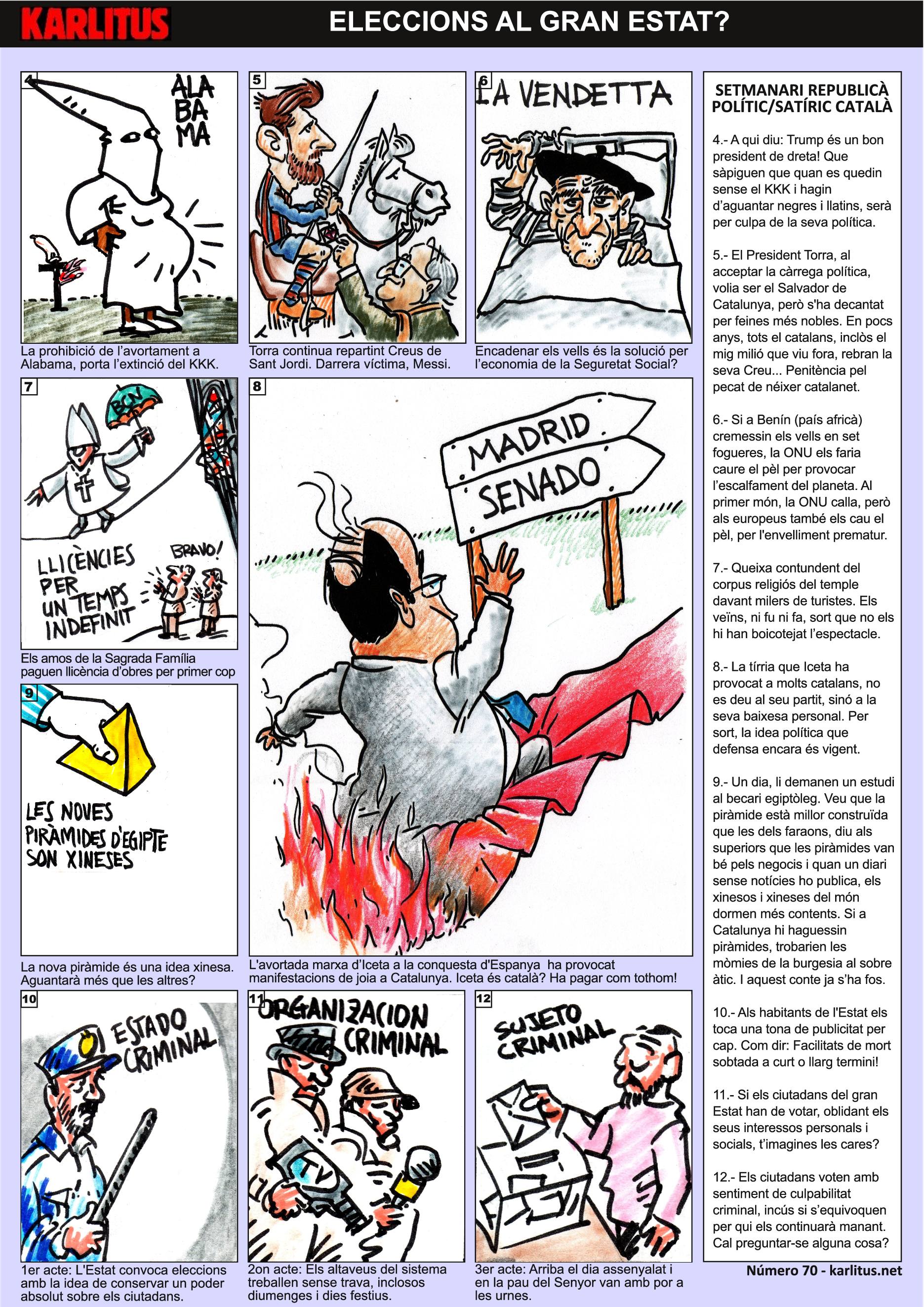 Political/satiric republican weekly of Catalonia
28 may 2019

VIGNETTE 1. Speech bubble: How few we are in this universe! / Yes, but we’re the masters!
Many species have already disappeared and one million are endangered. Unfortunately, those who are causing the massacre are the only group that is in no danger. Another proof of human justice and divine omniscience. The best always die early.

1.- The dominant class, happy with its wealth, its servants and pets. Do they realise that, if they continue with the habit of exterminating species, in the end they’ll have to eat each other?

VIGNETTE 2. Text: Reincarnation flourishes and gives forth its fruits.
Until the resurrection happens, humans can use their dead bodies as a natural fertiliser. A useful measure in the meantime - in case the promised reincarnation never comes about.
2.- A family conflict in the making: when grandad has been transformed into cherry tree and doesn’t produce many cherries, what will his grandchildren say? And who will dig up the cherry tree while granny’s still alive?

VIGNETTE 3. Speech bubble: No! Water, no!
Pig farms pollute the planet's water. There is over-production of pigs the world over and a resulting mega-deluge of slurry. Doesn’t anybody see a possible solution?

3.- The reconversion of the Islamic world is essential. If they still refuse to eat pork, we are lost. All that can be done is to ask Mohammed for his help in this.


SECOND TITLE PAGE: ELECTIONS IN THE GREAT STATE OF SPAIN?

The ban on abortion in Alabama leads to the extinction of KKK.
4.- To those who say that Trump is a good right-wing president: When the KKK is overwhelmed by its black and Latino neighbours, it will be precisely because of these right-wing policies!

Torra continues to award Saint George’s Crosses. The latest victim: Messi [Note: the Argentinian footballer Lionel Messi, Barcelona Football Club’s star player, is awarded a medal by the Generalitat, though many of recipients of the St George’s Cross have been called into question and the medal is seen to be devalued].


5.- President Torra, on accepting the burden of being a politician, wanted to be the Savior of Catalonia, but has now opted for a more noble occupation. In just a few years, all Catalans, including the half a million living abroad as well as those at home, will be awarded the Cross... It will have become a consolation prize for having suffered the misfortune of having been born Catalan.

Chaining up the elderly could be the solution for the Social Security system which is short of cash.

6.- If in the African country of Benin old people are burned in seven bonfires, these ancestral customs worry the UN because they contribute to global warning. In the western world, governments would like a similar solution because of the burden of supporting all these old people, but they signed the Kyoto Protocol. [Note: (wikipedia) The Kyoto Protocol is an international treaty which extends the 1992 United Nations Framework Convention on Climate Change (UNFCCC) that commits state parties to reduce greenhouse gas emissions, based on the scientific consensus that (part one) global warming is occurring and (part two) it is extremely likely that human-made CO2 emissions have predominantly caused it.]


VIGNETTE 7. Text: Permits for an unlimited time.
The owners of the Sagrada Família finally obey municipal by-laws and apply for and pay for a permit to carry out building work.
7.- A miracle takes place in the Sagrada Família and the Catholic Church obeys a secular authority and pays up – though the thousands of tourists are unaware of these miraculous events.

The thwarted departure of Iceta to guide the destiny of Spain has led to manifestations of joy in Catalonia. [Note: Miquel Iceta, leader of the Socialists in the Catalan Parliament, was convinced that he would be rewarded for his furious anti-independence stance and his championing of direct rule from Madrid in 2017-2018 with the post of Speaker in the Spanish Parliament, but needed the consent of the Catalan Parliament. The pro-independence majority refused this consent]. Is Iceta the new Tamarra Carrasco? [Note: Tamarra Carrasco was confined by Spanish judges to her home town of Viladecans after being the victim of a trumped-up charge of terrorism. Iceta is now confined to Catalonia!]
8.- The reason that Iceta is not well-liked by many Catalans is not because of the Socialist Party that he represents but because of his lack of basic human qualities. Fortunately, the political ideals he supposedly champions have not been affected by his appearance on the political stage during all these years.

VIGNETTE 9. Text: Egypt’s new pyramids are Chinese.
The new pyramid is a Chinese idea. Will it stand the test of time like the others?

9.- One day, they will ask a poorly-paid part-time Egyptology lecturer on a temporary contract to investigate this. The lecturer will see that the pyramid is better constructed than those of the Pharaohs, and announce that the pyramids are good for business. A newspaper hard up for news stories will publish this study and the Chinese people of the world will sleep more soundly. If there were pyramids in Catalonia, they would find the mummies of the bourgeoisie at the pinnacle. And this is the end of the tale.

Act the First: The State announces elections with the idea of preserving absolute power over the citizens.

10.- The citizens of the State find a ton of election propaganda per person clogs up their letter-boxes.

Act the Second: The upholders of the system work flat-out, including Sundays and public holidays.

11.- If the citizens of the imperial state of Spain were to vote for parties that actually respected their wishes, how would the system survive? Imagine the looks on the faces of the state’s defenders of the status quo!

Act the Third: The appointed day arrives and the citizens troop in fear to the polling stations.
12.- The citizens vote with a sense of guilt and confusion. Who do I vote for to change the system? Because whoever it is, the system will never change, and I’m guilty of having voted.