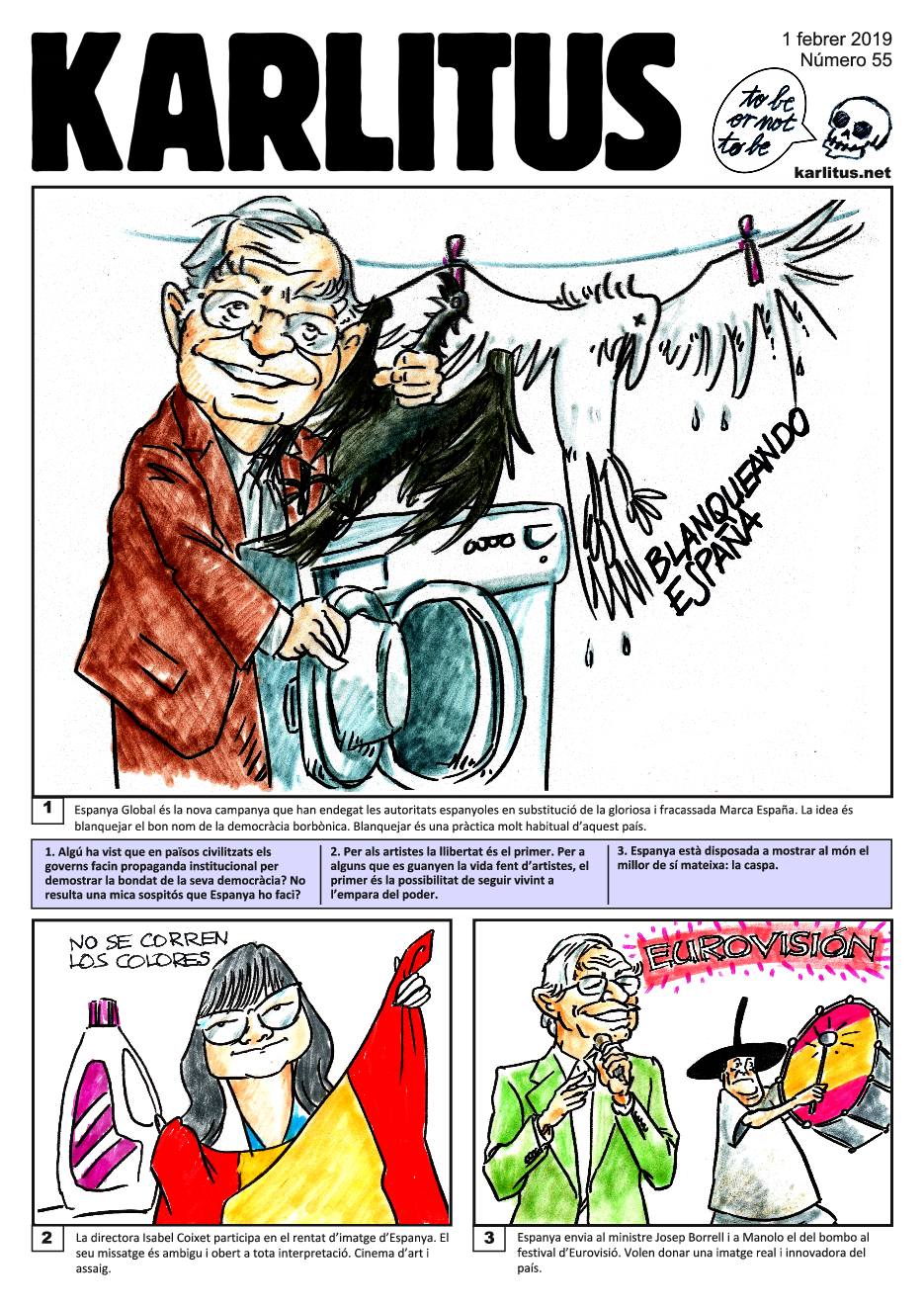 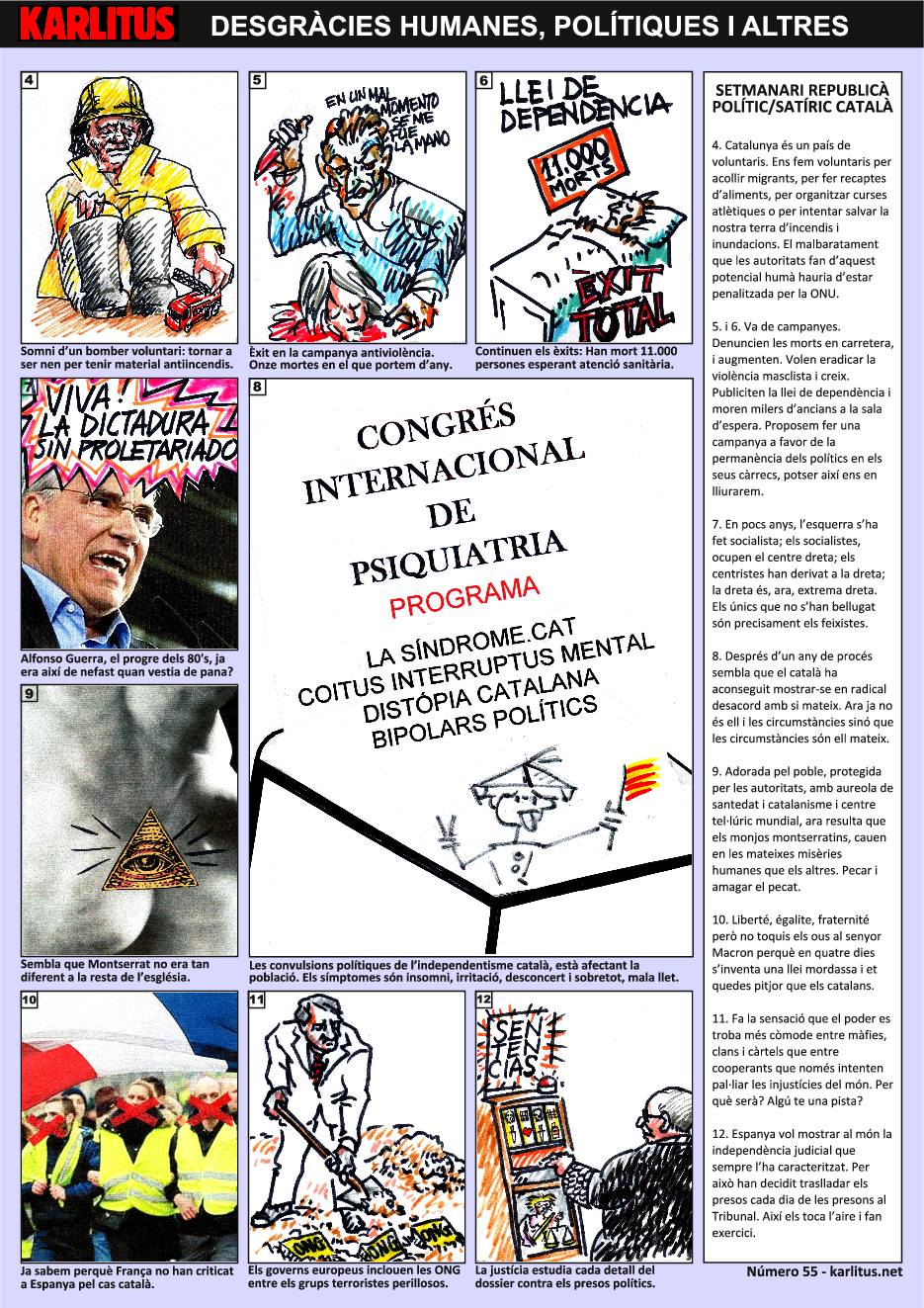 VIGNETTE 1.
Global Spain is the new campaign launched by the Spanish authorities to replace the glorious failed ‘Trademark Spain’. The idea is to paint over the tarnished image of the Bourbon regime and call it a democracy. Painting over the cracks of crumbling edifices is usual practice in Spain.
1.- Has anyone ever seen governments of civilised countries mounting publicity campaigns to convince people that they are democracies? Doesn’t it seem a bit odd that Spain goes around the world advertising how democratic it is?

VIGNETTE 2. Text: The colours don't run.
The film director Isabel Coixet does her bit in the campaign to improve Spain's image in the world. Her message is ambiguous and open to interpretation. A true disciple of the genre of enigmatic cinema. [Note: the not-so-talented Catalan film director Isabel Coixet, an outspoken defender of the existing Spanish state and detractor of Catalan independence, makes yet another unwatchable film with public money].
2.- For artists, freedom in all its forms is usually their main consideration. For those who claim to be artists but are not at all, the main consideration is to show support for the regime and thus continue to make a living from the public purse.

VIGNETTE 3.
Espanya sends its Foreign Minister Josep Borrell along with Manolo el del Bombo to the Eurovision festival. Spain needs to create an image of a forward-looking, dynamic and innovative state. [Note: (wikipedia) Manolo el del Bombo Spain national football team's most famous supporter and has become a national institution. He is easily recognized by his large beret, red number 12 jersey and his famous bass drum, "El bombo de España" (The drum of Spain), which he bangs throughout the match.]
3.- Spain wishes to show the world the best of itself via its mediocre and rancid personalities.


VIGNETTE 4.
The dream of a volunteer fireman: to be a child once again and have more firefighting equipment than he has now.
4.- Catalonia is a country of volunteers. We volunteer to give a home to immigrants, collect food for food banks, organise running races with the aid of volunteers, or try to save our land from fires and floods. The neglect of this human potential by the authorities should be penalised by the UN. Not only do the authorities fail to support the citizens’ endeavours but they often prevent them from doing anything in the first place.


VIGNETTE 5. Text: In a moment of madness my hand slipped.
The campaign to end violence against women has been a success. Eleven deaths so far this year.

5 and 6.- Campaign after campaign. A campaign against road deaths is mounted – deaths from road traffic accidents increase. Another to eradicate sexist violence - and such offences also increase. A campaign to herald new social services and thousands of elderly people die in the hospital waiting rooms. What about a campaign for politicians to remain permanently in their posts? Maybe in that way we’d be rid of them.


VIGNETTE 7. Speech bubble: Long live the dictatorship - without a proletariat.
Alfons Guerra, the left-wing firebrand of the 80s, is (surprise!) now a crusty old fart espousing the right-wing views of past regimes.
7.- Within the space of just a few years the extra-parliamentary far left has entered Parliament. They have subsequently shifted to the right and become socialist. The Socialist Party (PSOE) has in turn shifted from left to centre right. The centrists have become the right. The right are now the far right. The only ones who have not shifted are the ones who can’t go any further to the right - the people who have been fascists all their lives.


VIGNETTE 8. Text: International Congress of Psychiatry. Programme. The Catalan Syndrome (Síndrome.cat). Mental Coitus Interruptus. The Catalan dystopia. Bipolar Politicians.
The upheavals within the Catalan independence movement are beginning to affect the population of Catalonia. The symptoms are insomnia, irritation, bewilderment and, above all, bad temper.

8.- After a year of persecution by the state, the Catalan independence movement is now seen to be in radical disagreement with itself. Unity is strength, disunity is chaos.

VIGNETTE 10.
Now we know why France hasn't criticised Spain for the situation in Catalonia.

10.- ‘Freedom, equality, brotherhood’ is the motto of the French state, but don’t rile Mr. Macron because he doesn’t like it – that’s why he’s introduced laws to restrict public freedoms so that the French are now worse off than the Catalans.


VIGNETTE 11.
European governments include NGOs in their lists of terrorist organisations.
11.- One gets the feeling that the authorities are more at ease with mafias, clans and cartels than among the common people who try to right the injustices of this world. Now why would this be? Does anyone have a clue?


VIGNETTE 12. Text: Sentences.
Spanish judges hard at work examining every detail of their case against the Catalan political prisoners.


12.- Spain wants to show the world that its judges are independent and they are immune from any government pressure to humiliate the Catalan political prisoners. That is why they have decided to bring the prisoners to court every day from distant prisons. In this way they’ll be able to get a bit of fresh air and exercise as they are being moved around.