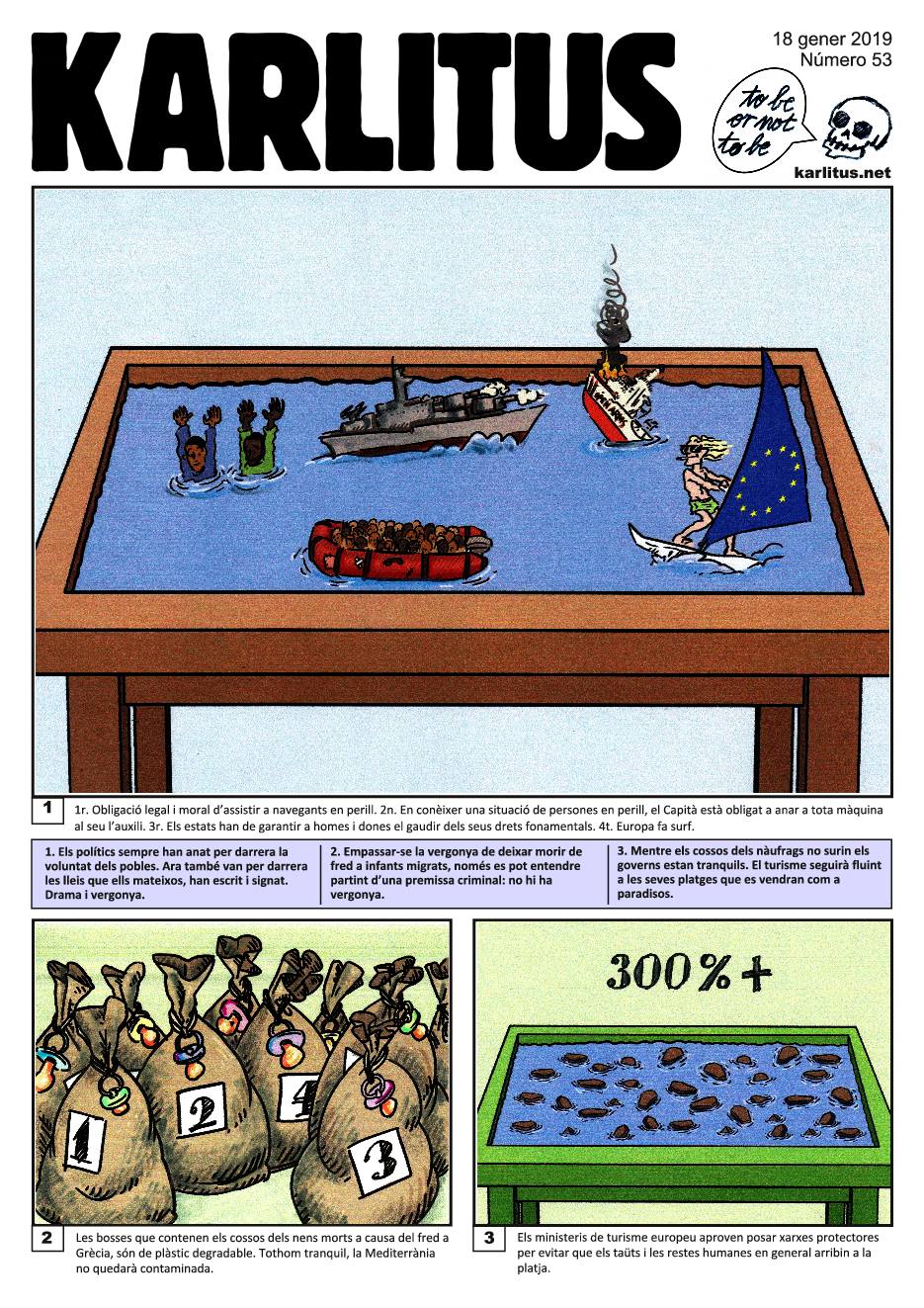 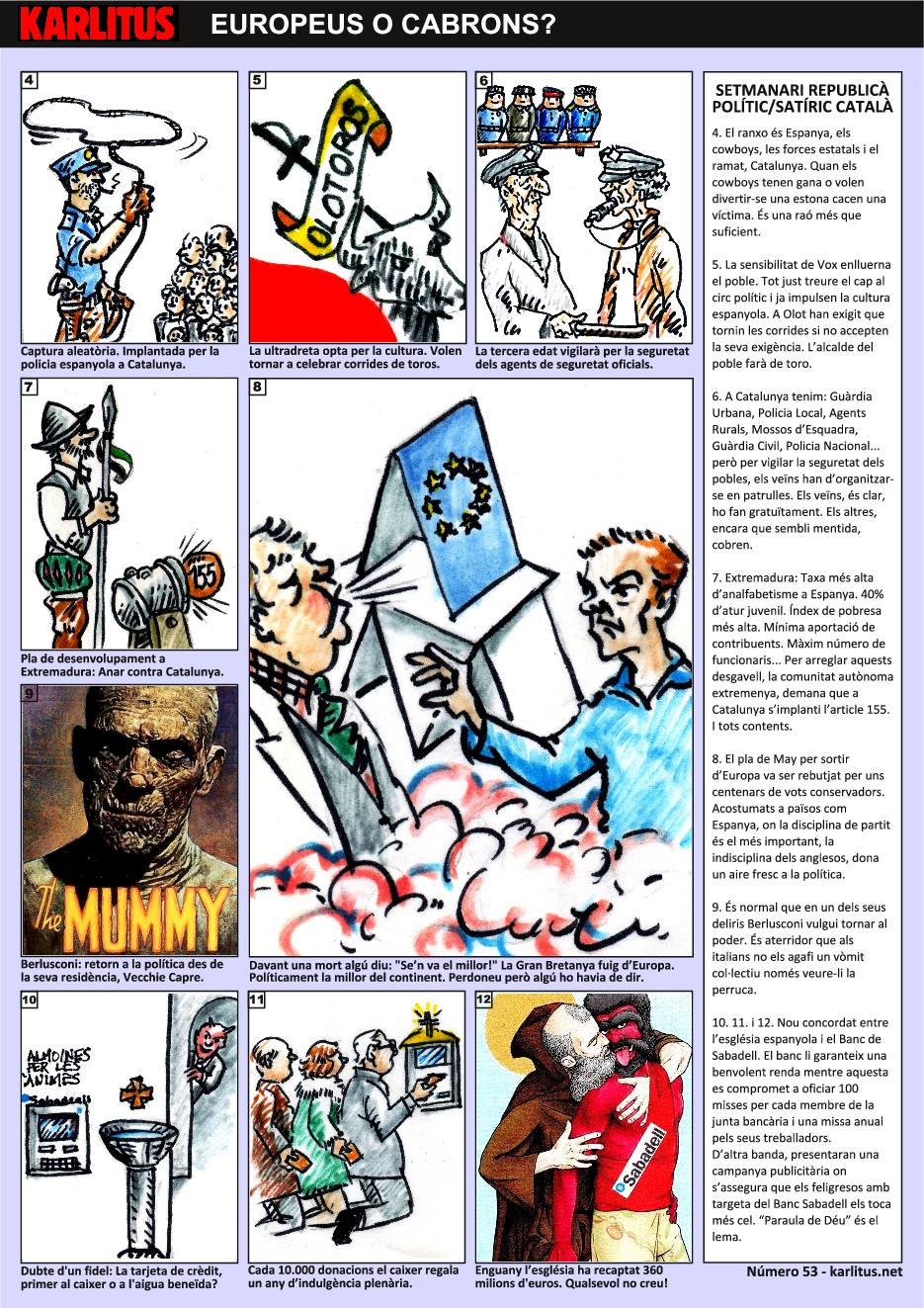 Keywords : Deaths in the Mediterranean Sea. Assistance at sea. Children dead from the cold. Human remains. Arrests by the Spanish police. The far right and bullfighting. Volunteer guardians of the peace. Extremadura and Article 155. Brexit and democracy. Berlusconi. The Church and the Bank of Sabadell
Previous
Next

(1). There’s a legal and moral obligation to assist people in danger at sea. (2). When a captain becomes aware of a situation where people are in danger he is obliged to proceed at full speed to rescue them. (3). States must guarantee men and women their fundamental rights. (4). Europe goes surfing.


1. - Politicians have always lagged far behind the will of the people. Now they are also loathe to implement the laws that they themselves have promulgated and signed. A drama and a disgrace.

The body bags with the bodies of children who have died from cold in Greece are made of degradable plastic. No cause for alarm. The Mediterranean will not be polluted.


2.- If no shame is felt in letting children die of cold, then those responsible must have the mind of criminals – that is, there is no shame in committing crimes.

The European tourism ministries approve the positioning of nets offshore to stop coffins and human remains from being washed onto the beaches.

3.- While the bodies from the shipwrecks go under and don’t float on the surface of the sea, the governments are not worried. The tourists will continue to fill the beaches that the governments have advertised as paradises.

Random arrest mode – the current operational setting for the Spanish police in Catalonia.


4.- The cattle ranch is Spain, the cowboys are the forces of the state, and the herds of cattle are Catalonia. When the cowboys are hungry or want to have a bit of fun they go hunting for a victim. It's a fair enough reason for their actions.

The far right in the Spanish state astounds us all and declares it is in favour of culture. They want bullfights to be promoted and given special attention.

5.- The sensitivity and compassion of Vox comes to the fore. Immediately after getting themselves into power publicly and behind the scenes they decide that Spanish culture needs to be imposed everywhere. In the town of Olot in Catalonia they have demanded that "bull running" be reintroduced, and if their demand is not accepted they’ll hold a bull-running anyway. In the absence of a bull they’ll use the mayor of the town.

The elderly will oversee security and take the place of official policing.

A development plan has been announced for poverty-stricken Extremadura. Attack Catalonia. [Note: The Regional Government in Extremadura, to divert attention from its spectacular inability to deal with the region’s problems, regularly criticises Catalonia and the Catalans, and calls for direct rule of Catalonia from Madrid].


7.- Extremadura: Highest rate of illiteracy in Spain. 40% youth unemployment. Highest poverty index. The least amount in the Spanish state raised from taxes. The greatest number of state, regional and local administration employees. To fix this drain on their economy the Autonomous Community of Extremadura demands that Article 155 is once again implemented in Catalonia, the autonomous administration suspended and that it is ruled directly from Madrid. Is everybody happy? You’ll bet your life they are.

When someone dies, some say, “The best ones always leave us too soon!” The UK flees from Europe. Politically, the best state in Europe. Sorry, but someone had to say it.

8.- Prime Minister May’s plan to leave Europe was rejected by a hundred votes from her own Conservative Party. Accustomed to countries such as Spain, where party discipline prevails over any other consideration, the indiscipline of the English shows us what politics could be.

Berlusconi: the comeback to politics from his residence, Vecchie Capre. [Note: Berlusconi (82), the right-wing Italian media tycoon and politician who has served as Prime Minister of Italy in four governments, decides that Italy needs him again at the helm.]


9.- Once again Berlusconi, in another of his delusions, decides he’ll return to power. It's a source of great wonderment that the Italians do not stagger around and vomit in mass when they see once again this octogenarian’s wig perched on his head.

The quandary of a committed Catholic: The credit card’s in my hand – do I go first the cash point or the font with holy water?

For every ten thousand donations you can withdraw a full indulgence valid for a whole year.

This year the Catholic Church has earned itself 360 million euros. Thanks be to God.

10-11-12.- A new agreement between the Spanish Church and the Banco de Sabadell. The bank guarantees an ecclesiastical income if the Church promises to celebrate one hundred masses for each member of the Bank’s Board of Directors and an annual mass for its employees. On the other hand, they will begin an advertising campaign which tells its cardholders that its credit card will give them more points for when they reach Heaven. The new bank motto is "We are the Word of God".