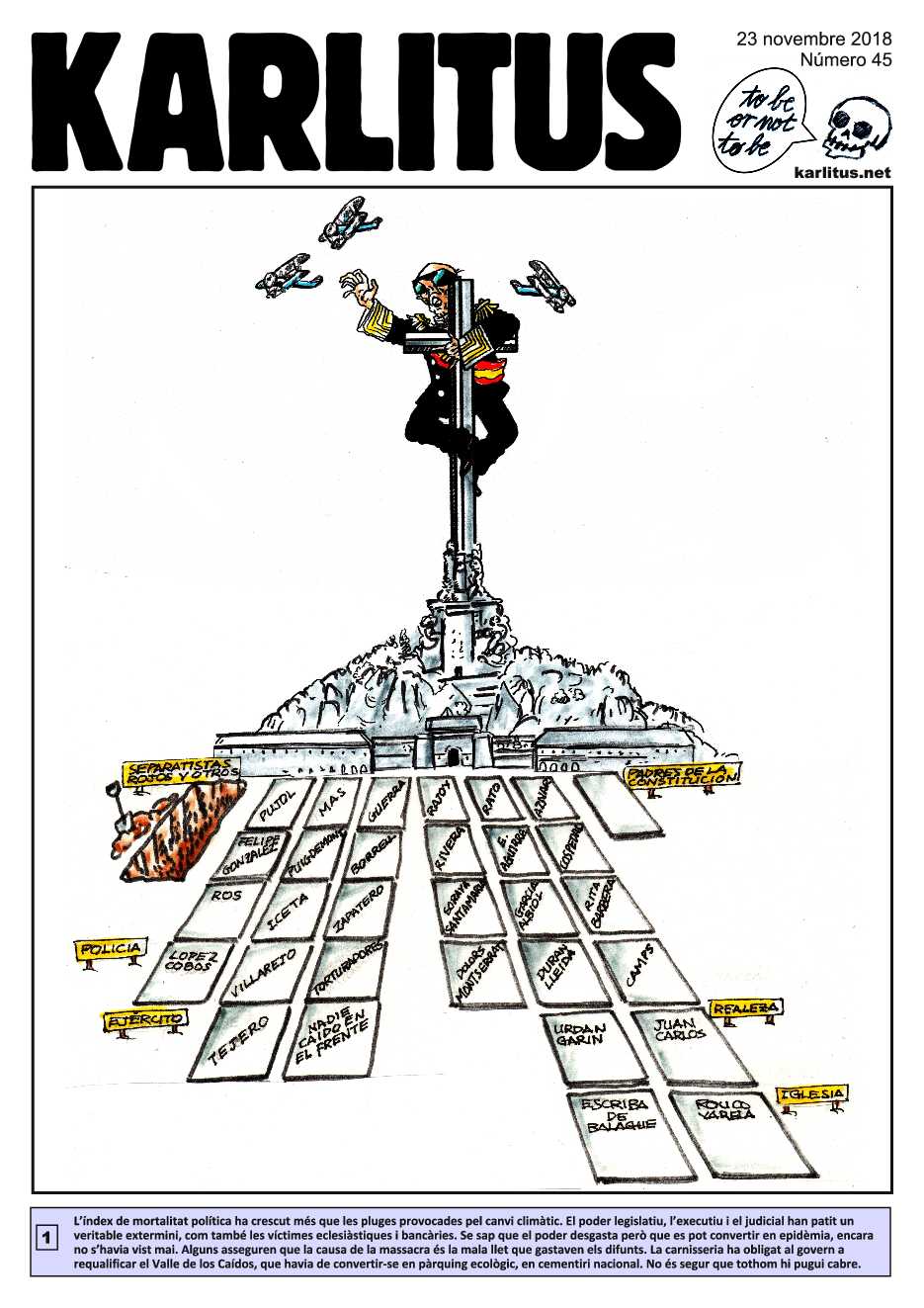 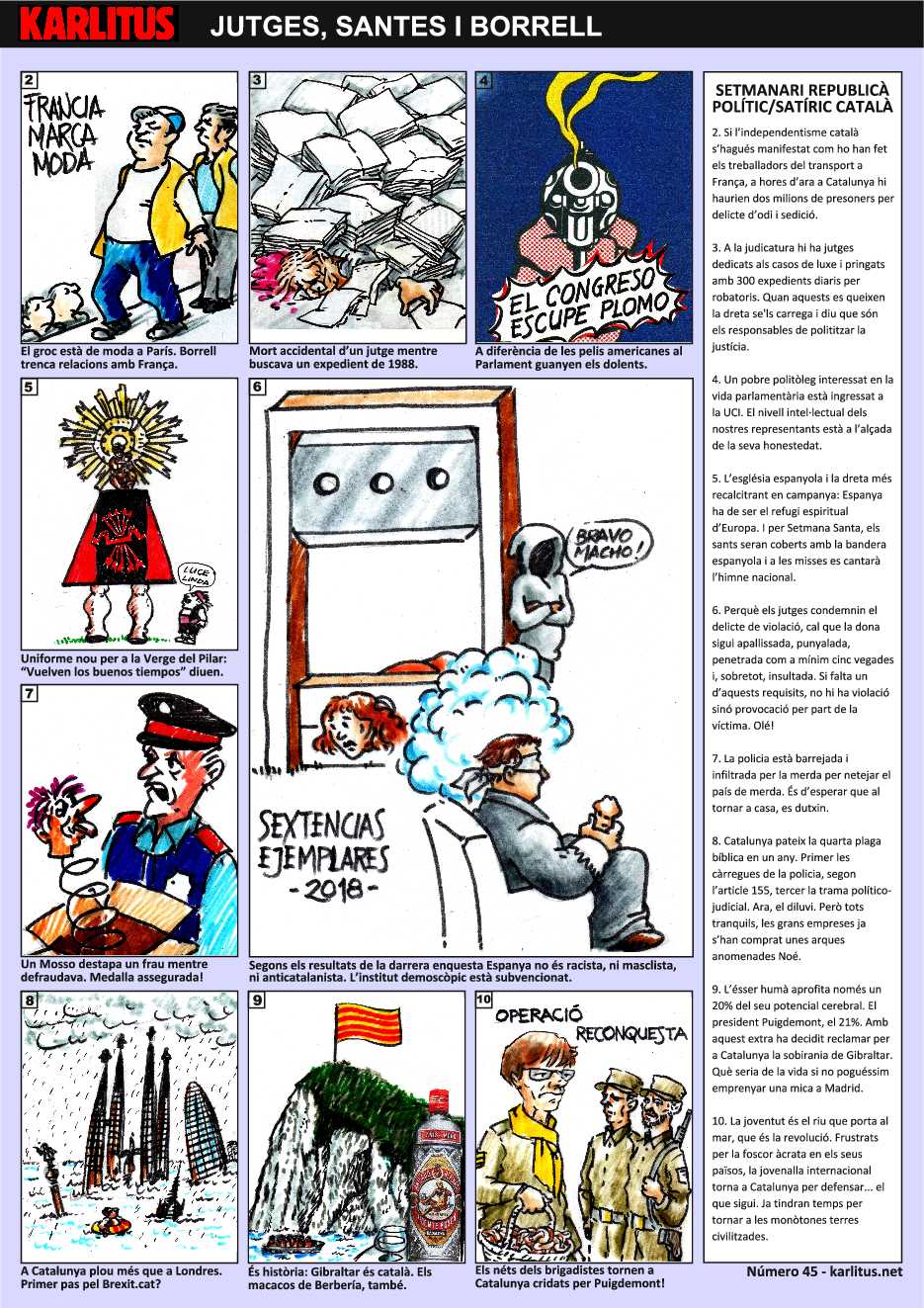 VIGNETTE 1
The death rate of politicians has shot up more than the number of torrential downpours caused by climate change. The legislative, executive and judicial arms of the Spanish government have been decimated, as well as the Catholic Church and the banking system. Power is an onerous burden, as we know, but its lethal effects are reaching epidemic levels never before seen.
Some say the cause of the slaughter is the deceased’s own venom which has killed them off. The great mortality has forced the government to reclassify the Valley of the Fallen, which was supposed to be levelled and converted into a nature-friendly car park, and it will become a great national cemetery instead. But there may not be enough room for everybody. [Note 1: The Valley of the Fallen is a mausoleum where the dictator Franco is interred and is a centre of adulation for Franco sits and people with nostalgia for the dictatorship. The Socialist government has half-heartedly proposed to remove the dictator’s corpse to another location to placate the less right-wing of its electorate]. [Note 2: The political and social landscapes is changing rapidly as the mighty fall from power, or are sent to jail for corruption and fraud, or depart this earthly life].

VIGNETTE 4 Text: France sets a fashion trend.
Yellow is the latest fashionable colour in Paris. Borrell severs diplomatic relations with France. [Note: The anti-independence politicians are suddenly allergic to the colour yellow as it has come to symbolise the movement for the freedom of the Catalan political hostages. Borrell, the Spanish Foreign Minister, takes slight at anything he considers to be anti-Spanish on The part of foreigners and most undiplomatically reproves the offenders. Since the French protesters are wearing yellow jackets this is an outrageous insult to Spain.]
4.- If the Catalan pro-independence movement had demonstrated like the transport workers in France have done, there’d now be two million people in jail accused of the crimes of hatred and sedition. There are many Catalans who would like to be French.

VIGNETTE 5
Accidental death of a judge, while looking for a case from 1988.
5. - In the justice system there are judges who preside over top-notch cases, while the idiot judges have to deal with three hundred cases a day of bag-snatching. When they complain, the right goes for them and says they are responsible for politicizing the justice system.

VIGNETTE 6 Text: The Congress spits lead.
Unlike in American movies, in Parliament it’s the bad guys who win.
6.- A poor political scientist interested in parliamentary life is admitted to the Intensive Care Unit. The intellectual level of our political representatives is is as low as their levels of honesty.
[Note: The Socialist Spanish Foreign Minister Josep Borrell claims he was spat at by a member of parliament, though video footage shows no sign of this incident. It has been said that he invented the incident in order to grab the headlines on a day when he had been found guilty of a fraudulent act involving company shares and ordered to pay a hefty fine).

VIGNETTE 7
A new uniform for the Virgin of the Pillar: "The good times are returning," she says. [In the Basilica of Saragossa there is a practice of placing a small blanket on the statuette of Our Lady of the Pillar. The clergy allowed a blanket with the insgnia of Franco’s Falange movement to be placed on it].
7.- The Catholic Church and the hard right on the campaign trail: Spain has to be the spiritual refuge of Europe. And by Easter, the saints will be draped with the Spanish flag and in the mass the national anthem will be sung with the lyrics of the renowned singer Marta Sánchez. Communion wafers will be yellow and red like the Spanish flag. [Note: Marta Sánchez, a mediocre pop singer, wrote lyrics for the anthem of the Spanish state which had previously only a melody. The lyrics, though stirringly patriotic, lack the grandeur which the official anthem of the world’s greatest state requires).

VIGNETTE 8 Text: Exemplary sentences 2018. Well done, my lads!
According to the results of the latest opinion poll, Spain is not racist, nor is it sexist, and nor is it anti-Catalan. The polling organisation receives financial aid from the state.
8.- For judges to consider the accusation of rape, a woman must be beaten, punched, penetrated (at least five times is recommended) and, above all, insulted. If one of these requirements is missing, no rape has taken place – indeed, the victim will be put on trial for provocation.

VIGNETTE 9
A Mosso (Catalan policeman) uncovers fraud while committing a fraud. A medal is guaranteed!
9.- The Catalan police are infiltrated by the dregs of the Spanish police - the country can only be cleaned up using dirt. Hopefully when they return home, they’ll have a shower.

VIGNETTE 10
In Catalonia it rains more than in London. Could this be an omen that there’ll be a Catalan Brexit from Spain?
10.- Catalonia suffers the fourth biblical plague in a year. First the police baton charges, secondly article 155, thirdly the criminal network of police and judges. And now the deluge. But not to worry, the big companies have already bought arks modelled on Noah’s.

VIGNETTE 11
Gibraltar is Catalan. The Barbary apes too.
11.- A human being makes use of only about twenty per cent of its brain potential. President Puigdemont, twenty-one per cent. With this extra percentage, he has decided to claim sovereignty over Gibraltar for Catalonia. Maybe he could have put the additional brain power to better use, but what the heck, if it riles Madrid it makes our life more interesting.

VIGNETTE 12 Texts: Operation Reconquest!
The grandchildren of the International Brigadiers return to Catalonia after being called on to serve by Puigdemont!
12.- Youth is the river that leads to the sea, or in other words, revolution. Frustrated by the lack of revolutionary action in their own countries, the youth of other lands return to Catalonia to defend ... whatever it is they have come to defend. The important thing is to feel the adrenaline rushing through your veins. There’s no hurry to go back to their monotonous civilized lands.