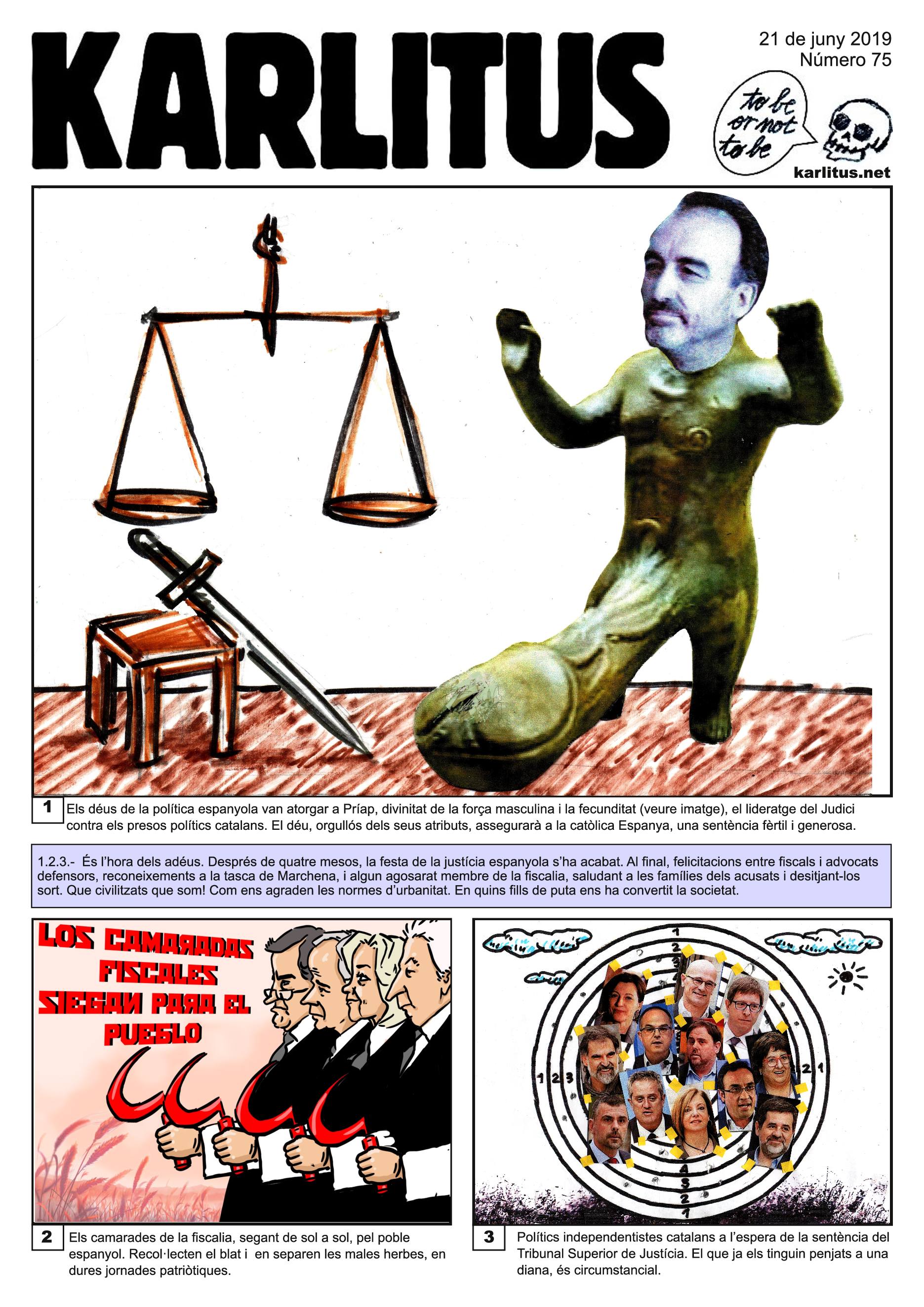 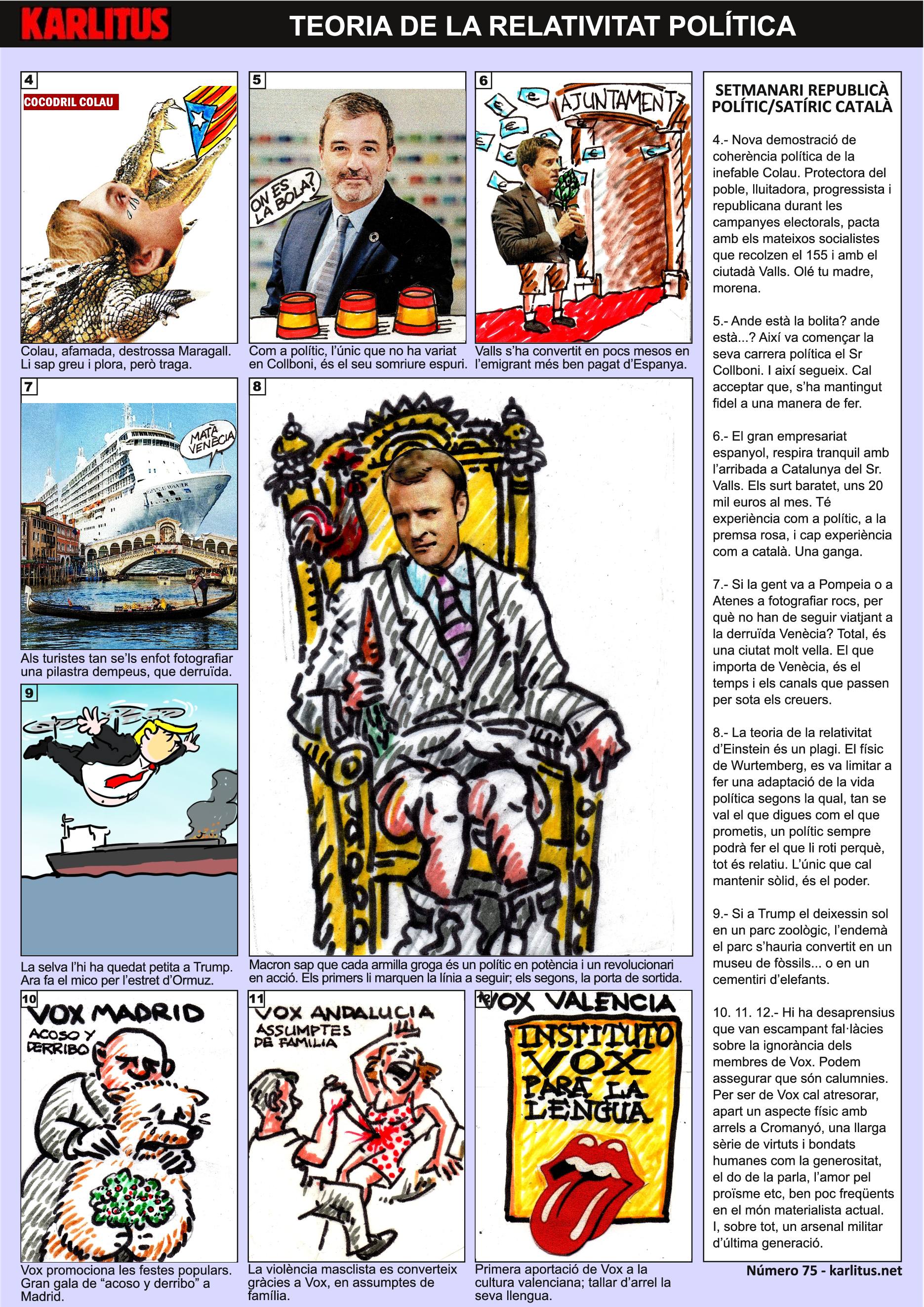 The gods of Spanish politics granted Príap, the god of masculine vigour and fertility (see illustration), the position of chief judge in the court case against the Catalan political prisoners. The god, proud of his testosteronic attributes, has promised Catholic Spain abundant prison terms of very generous lengths.

VIGNETTE 2. Text: The comrades of the prosecution reap for the people.

The Spanish public prosecutor and his cronies toil without rest from dawn to dusk for the fatherland. They harvest the Spanish wheat and separate the weeds as they labour patriotically with their Spanish scythes in the fields.

The Catalan pro-independence politicians are waiting for the Spanish High Court of Justice to hand out sentences for the imprisoned Catalan politicians and social activists. Though the sentences were decided long before the arrests in 2017 and the sham trial in the first half of 2019.


1.2.3.- It's time for goodbyes. After four months, the Spanish high court party is over. After the conclusion of the hearings, the lawyers congratulate themselves and prosecuting barristers and defending barristers both pay tribute to the hard work of Marchena [Note: the chief prosecutor of the Catalan prisoners, Marchena, has close links to the right-wing People’s Party, and is seen as a far-from-impartial judge]. One of the prosecuting barristers waves to the families of the defendants and wishes them luck. How civilised it all is. What exquisite etiquette! What a load of bastards society has made us.

Colau, thirsty for power, destroys Maragall. He laments this and weeps, but accepts his defeat.
[Note: Anti-independence Ada Colau of the Barcelona En Comú party, with the help of other anti-independence councillors (the Socialists and three votes from the right-wing Citizens’ Party), is re-elected mayoress and so stops the most voted party, the pro-independence Republican Left, from running Barcelona City Council).


4.- A new demonstration of political coherence from the ineffable Colau. The defender of the people, the warrior, a progressive and a republican during the election campaigns, makes a pact with the very same socialists who support the 155, and welcomes the support of Monsieur Valls. Mama Colau, you’re the tops. [155 – suspension of the Catalan government and direct rule from Madrid, defended by the right-wing (Vox, People’s Party, Citizens’ Party) and right-leaning parties (Spanish Workers’ Socialist Party)].

As a politician, the only thing that has not changed in the case of Collboni is his condescending smile. [Note: The Socialist Party in Catalonia has moved away from its left-wing Catalan ethos towards a right-wing patriotic Spanish stance. Collboni, the leader of the Socialists on Barcelona City Council may have changed his politics but his contemptuous smile remains].


5.- Which way is the wind blowing today? With this question Mr Collboni began his political career. And this has been his maxim ever since, as he moves around like a weathercock. It must be accepted, though, that if this constant shifting can be considered a principle, he has remained true to it.

VIGNETTE 6. Text: City Hall
Valls has become the best paid immigrant to Spain in the space of a few months.

6.- The Spanish business elite breathes easily once again with the arrival of Monsieur Valls in Catalonia. A bargain - for them he came cheap, and they need fork out only 20 thousand euros per month. He has experience as a politician, and has a constant presence in the gutter press. Though born in Catalonia, he’s an out-and-out Hispanophile and has no idea of what it means to be Catalan. Just the man for the job! [Valls, an ex-prime minister of France, person non grata in French politics, seeks to stay in politics by working his way up from the lowly position of city councillor in Barcelona after the last municipal elections. He is seen by the Spanish business elite as worthy of promotion for his extreme pro-Spanish and anti-Catalan views.]

For tourists, it’s the same to photograph an upright pillar as to take pictures of one that has been knocked down.

7.- If people go to Pompeii or Athens to photograph rocks, why should they not go a bit further to ruined Venice? After all, it's another very old city. But it is made more attractive by the immense cruisers blocking its canals and dwarfing the city.

Macron knows that every wearer of a yellow jacket is a revolutionary in action and a potential politician. The first ones show the way out of the maze; the others lead the way through the maze.

8.- The theory of relativity of Einstein is a plagiarism. The physicist from Württemberg merely adapted observations on the behaviour of politicians. No matter what they say, however much they promise, a politician will always be able to do whatever they want because everything is relative. The only thing that needs to remain fixed, or solid, is power.

The jungle is now too small for Trump. Now he’s a marine ape, in the Straits of Ormuz.

9.- If Trump were to left alone in a zoo, the next day it would open as a fossil museum... or an elephant cemetery.

Vox promotes public festivities. They arrange a great display of a "destructive military onslaught" in Madrid.

Sexist violence, thanks to Vox, has been renamed family matters.

10. 11. 12.- There are unscrupulous people who are spreading falsehoods about the ignorance of Vox members. We can assure you that it’s all lies. For Vox, apart from promoting the typical cartoon Fascist image with leaders with a liking for great amounts of hair oil, in fact cherishes a long list of human virtues and values such as generosity, well-spokenness, love of one’s neighbour, etc., all of which is very rare in today's materialistic world. And, above all, a state-of-the-art military arsenal.