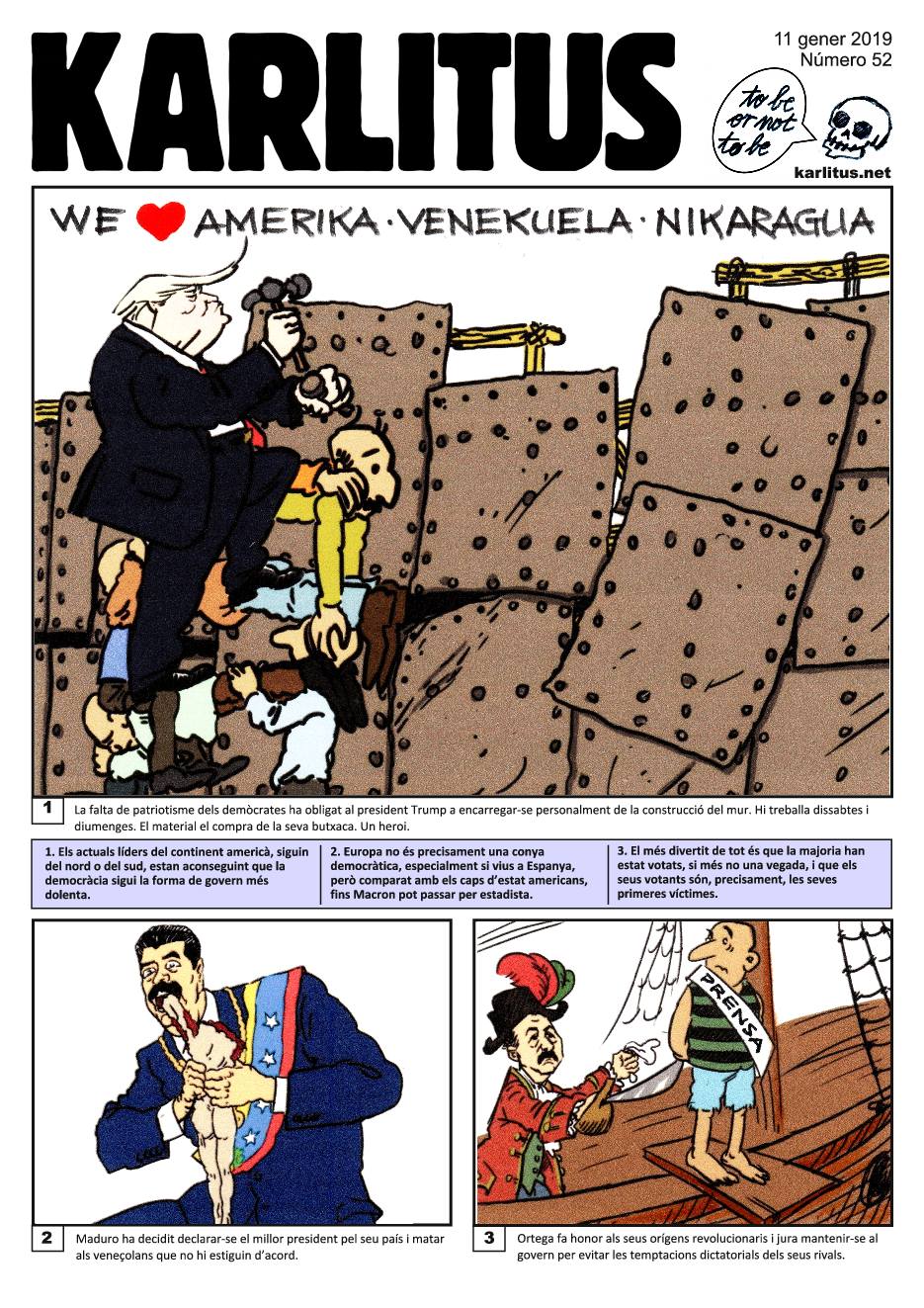 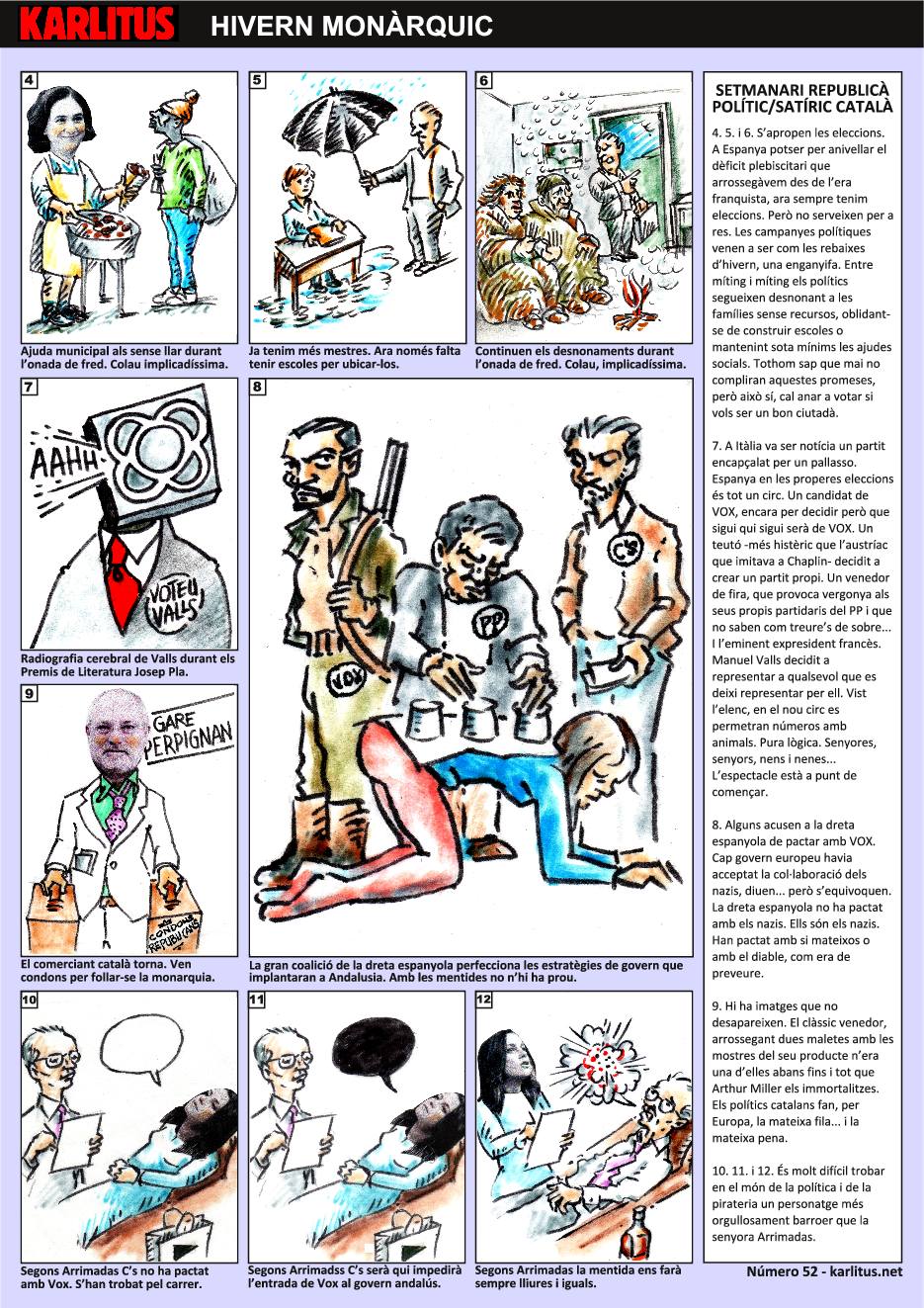 Keywords : Trump’s wall. Maduro the assassin. Ortega the dictator. The homeless. Mayor Colau. Municipal elections. A cold spell and a wave of evictions. Arrimadas at the psychiatrist’s. Nazis in Spain. New teachers in Catalonia.
Previous
Next

VIGNETTE 1
The Democrats’ lack of patriotism has forced President Trump to see personally to the construction of the wall. He works there on Saturdays and Sundays and pays for the construction material out of his own pocket. He’s an American hero.
1. - The current leaders of the American continent - whether they are from the north or the south - are making democracy into the worst possible form of government.

VIGNETTE 2
Maduro, has decided to declare himself the best-ever President of his country and kill those Venezuelans who disagree.
2. - Europe is not precisely a shining example of democracy, especially if you live in Spain, but if you compare it with what the leaders on the American continent are up to... That is, not until Macron makes himself into a great statesman.

VIGNETTE 3
PRESS
Ortega pays homage to his revolutionary origins and pledges to remain in government to avoid the dictatorial tendencies of his rivals.
3. The funniest thing of all is that most of them have been voted into power – at least once - and that it is their voters who are their first victims.

VIGNETTE 4
Help from the City Council for the homeless during the cold spell. Long live Colau. [Note: Ada Colau is the mayoress of Barcelona, voted in on a left manifesto, but with little to show for her presence since June 2015 at the City Council. Municipal elections are coming up in May, so a bit of self-promotion is never wasted.]

4-5-6. - The elections are coming. In Spain, perhaps to make up for the total absence of elections during the Franco dictatorship, we now have had a surfeit of elections, with various ones programmed for 2019. But they serve for nothing. Political campaigns are like publicity for the sales - a marketing trick. There are meetings and rallies but the politicians continue to evict families without resources, forget to build schools or keep social security payments at a low level. Everyone knows that they will never fulfil these promises, but you have to go and cast your vote if you want to be a good citizen.

VIGNETTE 5
We have more teachers. Now, all that’s needed is to have schools for them to work in.

VIGNETTE 6
The evictions continue during the cold spell. Colau, where are you? [Note: The mayoress of Barcelona was an leader of the anti-eviction movement, and pledged to halt evictions if voted into power].

VIGNETTE 7
A brain scan of Manuel Valls during the Josep Pla Literary Awards [Note: Ex French PM for the Socialist Party, now seeking to restart his political career by standing as candidate for the right-wing Citizens’ Party in Barcelona, made loud comments during an award ceremony when reference was made to the Catalan political prisoners. Valls maintains the right-wing parties and socialists’ refrain that in Spain there are no political prisioners].
7.- There’s a political party led by a clown in Italy. That’s nothing. There are so many clowns in the Spanish parties in the forthcoming elections that they make up a veritable circus. In the local elections, in Barcelona, there’ll be a candidate for the VOX party, as yet undecided, but one will be conjured up, that you can bet your life on. [Note: Vox, an ultra-nationalist Spanish party with a fascist ideology which has unexpectedly gained much support all over Spain, and expects it will have suffient votes in Catalonia that it will have a goodly number of councillors in the local elections]. Then there’s a Teuton who is more hysterical than the Austrian who imitated Chaplin – this shouting gentleman has decided to create his own party [Note: A right-wing German businessman is standing for mayor with the hope of attracting the Spanish nationalist and anti-Catalan vote]. Then there’s a pie salesman, another hysterical gentleman fond of shouting, whose performances shame even the members of his own party, which is not sure how to get rid of him so soon after making him its candidate... [Note: The right-wing People’s Party has chosen an ex-member of a fascist organisation, an owner of a bakery chain, to be its candidate, but he struts on the stage and rants in the manner that one associates with the extreme right-wing. Old habits die hard]. And the eminent former French PM Manuel Valls decided to represent anyone who would let him be their representative. Seeing this troupe of rib-ticklers on the programme of attractions, we should be well entertained. Take your seats, everybody – the circus show is about to start.

VIGNETTE 8
The great coalition of the Spanish right is perfecting the policies it will inflict on Andalusia. As well as hearing the usual lies, the people can now expect to be roundly abused and misused too.
8. - Some accuse the Spanish right of entering into agreements with VOX. [Note: There are calls by some for a cordon sanitaire to prevent the fascist VOX party from gaining postions of power through agreements with other parties]. No European government accepted the collaboration of the Nazis, they say ... but they are wrong. The Spanish right has not agreed with the Nazis. They ARE the Nazis. They are agreeing with themselves in different guises. They are the devil incarnate – it’s all so predictable.

VIGNETTE 9
The Catalan salesman returns to the market. Fuck the monarchy is their cry – and they’re selling condoms to this end.
9. - There are images that do not disappear. For example, the travelling salesman, dragging along his two suitcases with the samples of his product and was immortalised by playwright Arthur Miller. Catalan politicians peddle their wares in Europe without success... and evoke the same pity.

VIGNETTE 10
According to Arrimades, the Citizens’ Party has not made any pact with Vox. They have simply bumped into each other on the street and have greeted each other. [Note: The Citizens’ Party has concluded a pact with the fascist VOX Party in Andalusia by allowing its coalition party, the People’s Party, to undertake the negotiations on its behalf and so claim it has had no hand in allowing the VOX party to make up the majority of seats needed to form a majority in the parliament of Andalusia. Arrimades is the leader of the party in Catalonia]

VIGNETTE 11
According to Arrimadas, it’ll be the Citizens’ Party that will stop Vox from having any part in the Andalusian government.

VINETTE 12
According to Arrimades, lies will always make us free and equal.

10 11 12. - It is very difficult to find in the world of politics and piracy a more proudly Baroque character than Mrs. Arrimadas.