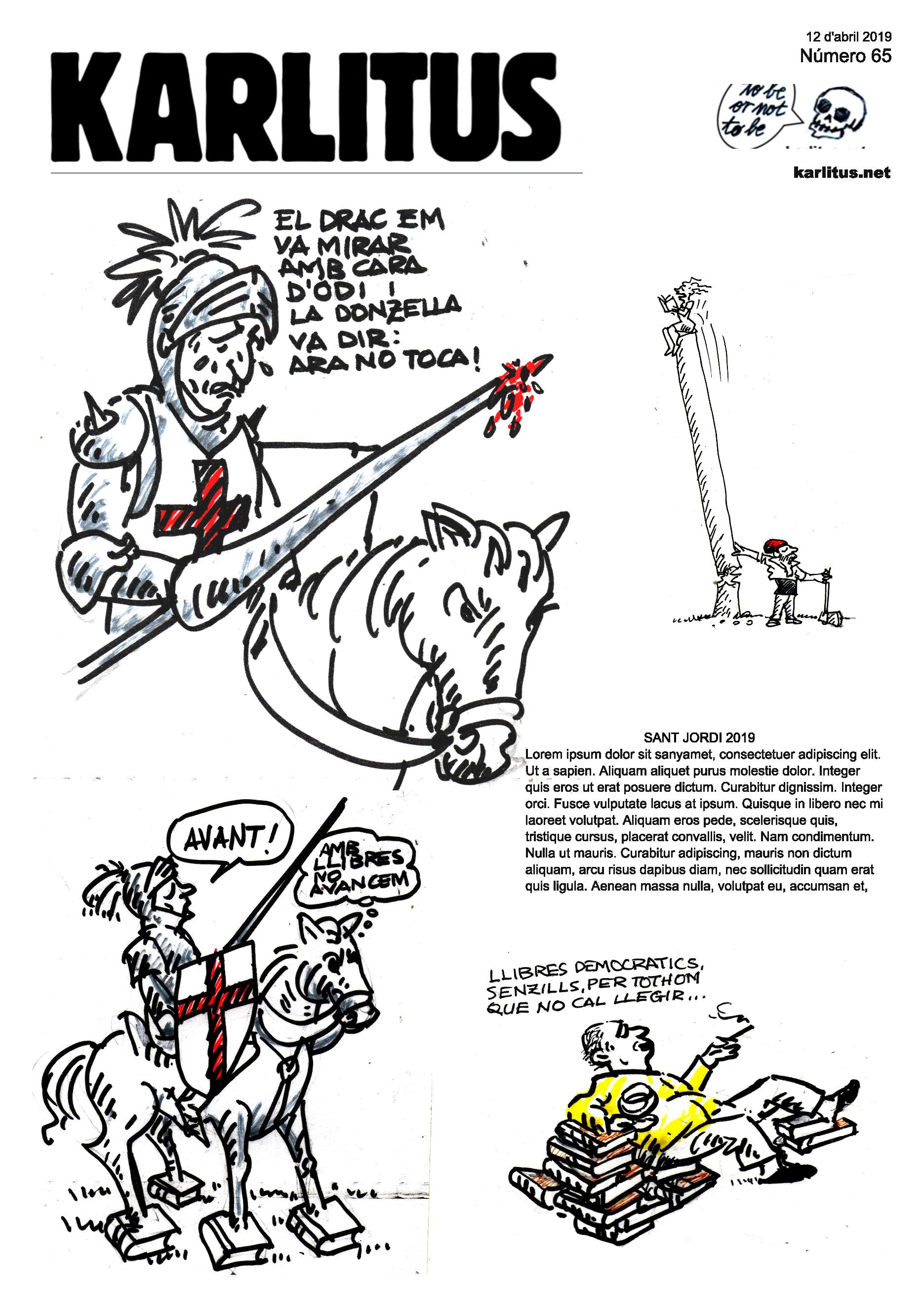 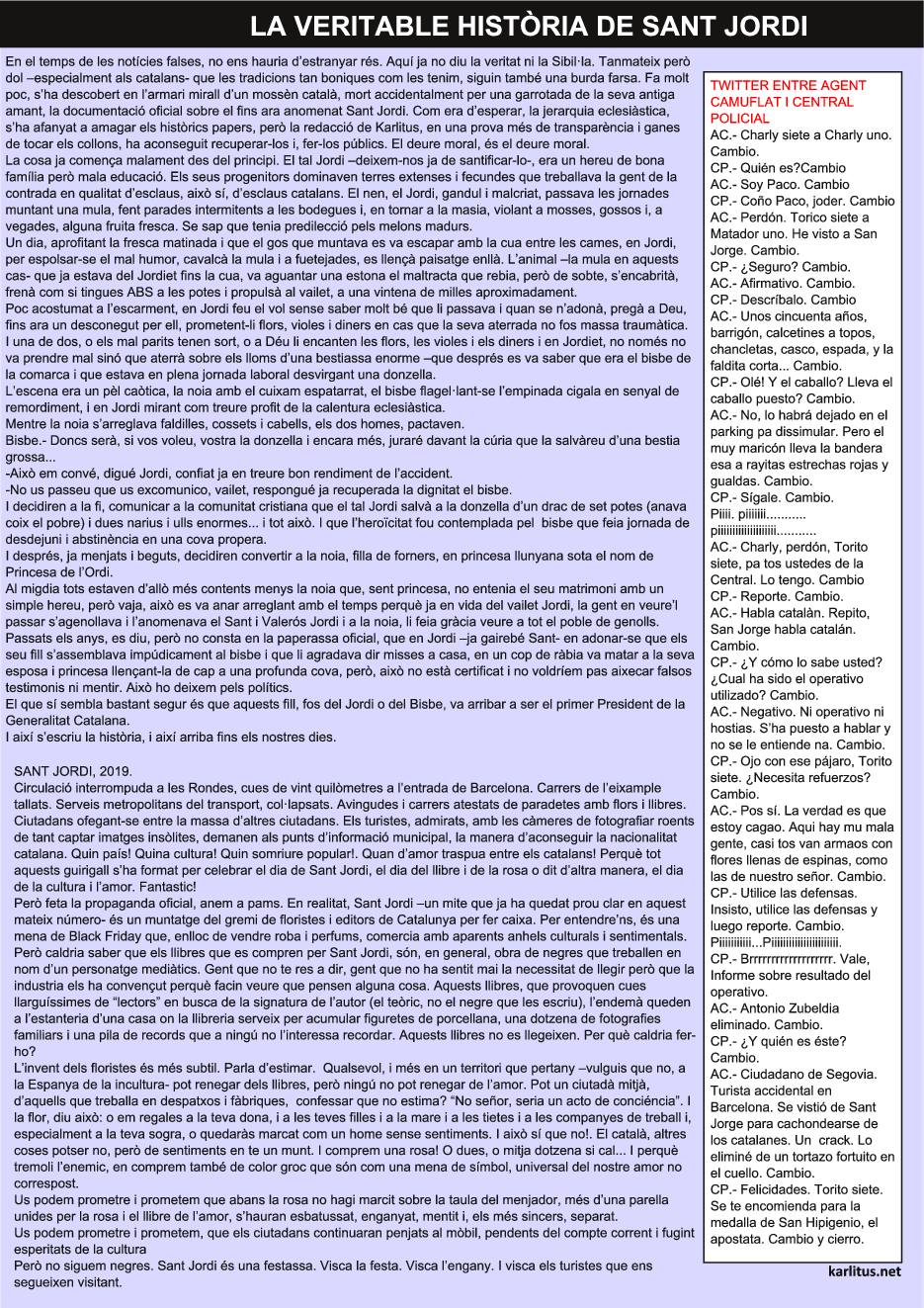 
In a time of fake news, nothing should surprise us. Nowadays not even the Sibyls tell the truth [Note: The Sibyls were oracular women believed to possess prophetic powers in ancient Greece]. However, it’s hard to accept, especially for us Catalans, that our beautiful traditions are also complete inventions. Very recently, in the cupboard of a Catalan monk, accidentally strangled to death by his-ex-lover, official documents were discovered referring to the so-called Saint George. As we might have known, the ecclesiastical authorities have striven to hide these historic papers, but the editorial board of Karlitus, in yet another demonstration of its zeal for revealing hidden truths and its eagerness to annoy those who deserve to be annoyed, has managed to get hold of them and to make them public . A moral duty is moral duty.


The whole thing got off to a bad start. Saint George – but let us not refer to him by his saintly status, plain George will do - was the heir of an important but bad-mannered family Their ancestors held sway over extensive fertile lands worked by the people of the area as slaves – Catalan slaves. The boy George, lazy and badly brought-up, spent his days riding a mule, stopping off at wine cellars and, when returning to the farmhouse, violating young girls, dogs and, sometimes varieties of fresh fruit. It is known that he had a predilection for ripe melons.


One day, taking advantage of the fresh dawn and that the dog he was riding escaped with its tail between his legs, in George, to get over his bad mood got onto the mule and whipping it he moved off into the countryside. landscape is thrown away. The animal - the mule in this case - fed up to the back teeth with George already from Georgeet to the tail, endured for a while the mistreatment that he was receiving, but suddenly, he reared up and came to a dead stop as if he had air brakes and propelled his rider about twenty miles approximately.

Not very used to being sent skyward by mules, George flew through the air without really knowing at first what was happening to him. When he realised, he asked God, up until now unknown to him, that his landing would not be too traumatic, and promised him flowers, violas and money. And one of two things - either this flying blockhead was extremely lucky, or God loved little George’s offer of flowers, violas and money, because not only did he have a soft landing, but he had an interesting landing too – he landed on the back of a huge beast. He soon found out it was the bishop of that part of the country who was hard at work deflowering a maid.

The scene was somewhat chaotic. The girl had her thighs open, and the bishop was whipping his risen member as a sign of repentance. George looked to take advantage of the ecclesiastical randiness. As the girl arranged her skirts and hair the two men made an agreement.

Bishop.- Well, if you wish, the maid is yours, what’s more, I will swear before my ecclesiastical masters that you saved her from a great beast...


- Suits me, said George, confident of turning the ecclesiastical incident to his own advantage.


- Do not make me excommunicate you, little man, answered the bishop, who by now had recovered his dignity.


Eventually they decided to inform the Christians of good faith that George had saved the maid from a seven-legged dragon (the poor thing was lame) and two nostrils and huge eyes... etc. Meanwhile the bishop contemplated the heroic act as he fasted and abstained from sexual activity for a day in a nearby cave.

And then, having taken food and drink, they decided to make the girl, the daughter of a baker, into a princess under the name of Princess of the Barley.


At noon, all were most content - except for the girl who, now a princess, did not understand her marriage to a simple heir. However, over time, she got used to it because even as he lived people venerated little George. As he passed by, people knelt and called him Valiant George and Saint George and it amused the girl to see the whole town on its knees.

Over. the years, it is said, although it’s not in the official records, it didn’t take George long – he was now almost a Saint - to realise that his son was more and more like the bishop. He liked to hold mass at home and exorcise malignant spirits in dogs and cats and goldish. So in a fit or rage George killed his wife the princess by throwing her into a deep cave, but it must be said it’s only hearsay - there’s no written document with an account of this. For that reason, we won’t vouch for its veracity. We wouldn’t like to be accused of lying, We’ll leave telling lies to the politicians.


What seems quite certain is that this son, whether engendered by George or by the Bishop, became the first President of the Catalan Generalitat.
And this is the story that has come down to us over the centuries. Take it or leave it.

Traffic at a standstill on the ring roads, twenty-kilometre queues on the roads leading into Barcelona. The streets in the district of the Eixample blocked off. Public transport in the Metropolitan area collapsed. Streets and avenues chock-a-block with flower stalls selling roses, and bookstands. People suffocating in the crush of the crowds. The tourists, overcome with admiration, taking hundreds of photos of the unusual event, and then rushing to tourist information centres to ask how they can take out Catalan citizenship. What a country! What a culture! What smiles on all the populce! So much love among the Catalans!
All this chaos is the celebration of Saint George's Day, the day of the book and the rose, or in other words, the day of culture and love. Fantastic!

But let’s leave aside the official propaganda and look at the facts. In fact, Saint George’s Day - whose myth has been exploded in this edition of Karlitus, and whose real story has been revealed - is an event promoted by the guild of florists and the association of publishers in Catalonia to fill up their pockets. Put simply, it's kind of a Black Friday but instead of selling clothes and perfumes, books and roses are sold by dressing up the commercial operation with trappings of cultural and sentiment.

But we should all be aware that the books bought on George’s Day are, in general, written by ghost writers under the name of celebrities. People who have nothing to say, people who have never felt the need to read anything except Whatsapp messages. But the publishers have convinced them they are intellectuals and thinkers of the first order.
These books, which cause long queues of "readers" who want the signature of the author on the fly-leaf (of the fake author, not the real writer of the book) will be, the next day, on the bookshelves in houses where the shelf serves to accumulate porcelain figurines, a dozen family photographs and a plethora of souvenirs that no one is interested in. These books are not readable. Why do they do it?

The inventions of the florists are more subtle. They talk of love. Nobody, especially in a country which, whether we like it or not, is still part of Spain, where lack of culture is revered rather than abhorred - can resist the talk of love. Could the average citizen, the one who works in offices and factories, declare that he or she is alien to love? No. Nobody can deny love. And the flower says this: either you give me to your wife or husband, your daughters and sons, and mother and father, your aunts and uncles, your colleagues, and especially your mother-in-law, or you will be seen as a person without feelings. And nobody wants that! Maybe a Catalan is lacking in many things, but a Catalan is chock-a-block with feeling. And so we buy a rose! Or two, or half a dozen if necessary... And because it makes the enemy tremble, we also buy yellow ones as a kind of symbol to show our unrequited love.

We can say with total certainty that before the rose has faded on the dining room table, more than a few couples brought together by the rose of love and the book of love, will have been mistreated by the partner, or deceived, or lied to, and the most sincere lovers will have separated.


We can say with total certainty that people will continue to be glued to their mobile phones, looking at their current accounts and fleeing in fear from the expense of culture.


But let's not look on the dark side. Saint George is a grand festival. Long live its fraudulent nature. And long live the tourists who are still visiting us.

Plain-clothed paramilitary.- Charlie seven to Charlie one. Over.

Paramilitary barracks.- Who’s speaking? Over.
PCP:- Me. Paco. Over.

PB:- Hello there Paco. It’s two years since we were on the training course in the Miami. We’re in Spain, for Christ sake. Over.

PCP:- I beg your pardon. Tango seven to Mike one. I’ve seen Saint George. Over.
PB:- Are you sure? Over.

PCP:- Affirmative. Over.
PB:- Describe him. Over.

PCP:- No, he’s left it in the car park so as not to give himself away. But the bastard’s carrying that yellow flag with the four red stripes. Over.

PCP:- Apologies to you all, Charlie, I mean Tango seven, in the paramilitary barracks. I’ve got him in sight. Over.

PB:- Impossible. How do you know it’s Catalan? Over.

PCP:- Because he started talking and I can’t understand a word he’s seeing. Over.

PB:- Did you give him a dirty look? Over.
PCP:- Affirmative. But he’s cross-eyed. Over.

PB:- Be careful with that dangerous individual, Tango seven. Do you need reinforcements? Over.

PCP:- Yes. The truth is, I'm scared shitless here. There are some really bad people around, almost all of them are armed to the teeth with some kind of flower that has thorns on the stem, like the thorns of the crown they placed on our Lord’s head to cause him pain. Over.
PB:- Then defend yourselves by whatever means. Repeat. Use all your weaponry, and then report back. Over.

PCP:- As it says on all our barracks above the entrance, Everything for the Fatherland, chief. Mission accomplished. Over.

PB:- Call me by my code name, Paco. What’s the point of having one otherwise? Over.

PCP:- Whatever you say, Blue Eagle. Over.

PB: Report on the result of the operation. Over.
PCP:- Antonio Zubeldia eliminated. Over.

PCP:- He’s from Segovia. Visiting Barcelona as a tourist. He dressed up as Sant George to poke fun at the Catalans. A real joker! He croaked it after a chance blow to the back of his neck. Over.

PB:- Congratulations. Tango seven. I’ll recommend you for the medal of Saint Hipigénio, the Apostate. Over and out.