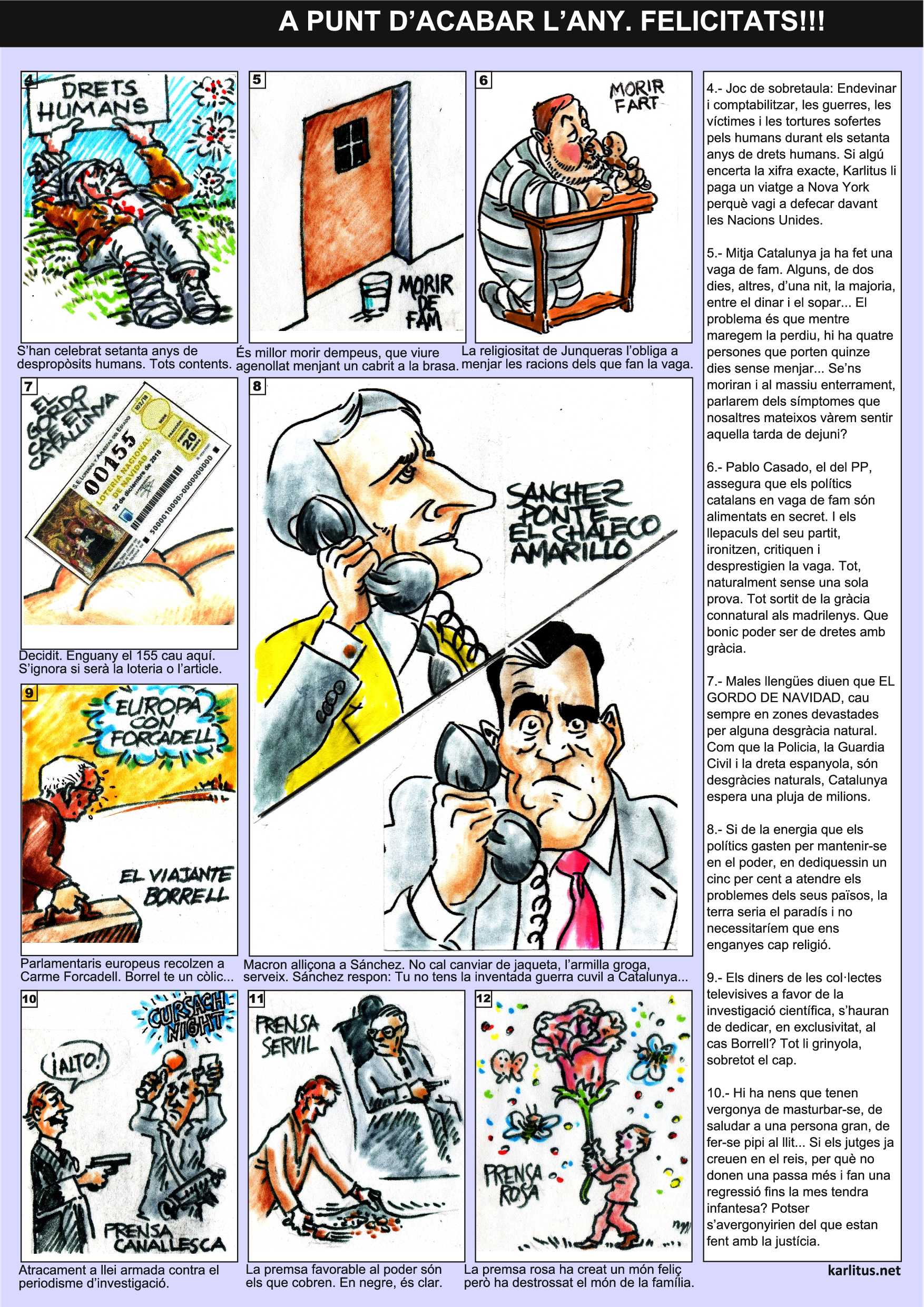 VIGNETTE 1. Text: The Fatherland comes on a visit to see us.
After denying any type of political solution for Catalonia, the Government of Spain winged it over to Barcelona to hold a cabinet meeting. Coincidence? Or provocation? Or simply gross stupidity? Looking at how the Socialist Party operates, the third option would seem to be the most likely one. [Note: on Dec. 21, the date of the regional election illegally imposed on the Catalans by the Spanish government under the right-wing People’s Party in 2017, the Socialist Government sees fit to commemorate this date with the unusual decision to transfer the cabinet of ministers to Barcelona for a day]
1.- Socialist ministers arrive in Barcelona accompanied by their Praetorian Guard - the unspeakable Spanish police and the ineffable paramilitary Civil Guard. To be safe on their lightning visit to Catalonia the ministers will wear bulletproof vests and chastity belts.

VIGNETTE 3. Text: The CDRs paralyse Barcelona.
Tamara Carrasco asks the Spanish Supreme Court to imprison her. She does not want to spend another day in Viladecans. [Note: Viladecans is a town which is considered unattractive and boring.] [Note: (adapted from Wikipedia) On April 10, 2018, Tamara Carrasco was detained by the paramilitary Civil Guard at her home for an alleged crime of terrorism. The accusation was based primarily on an WhatsApp audio where she called for an indefinite general strike, and on the possession of a yellow plastic whistle and a leaflet. She was imprisoned in Madrid and later the Spanish prosecutor accused her, without producing any evidence, of preparing an attack on the barracks of the Civil Guard in Barcelona and of plotting to burn the Spanish flag in the village of Balsareny. At the present time she is confined within the limits of her home town, Viladecans].
3. - The Supreme Court has ruled that Tamara cannot leave her hometown as she might destroy the evidence for the crime: a plastic whistle and a leaflet. Fantastic!

SECOND TITLE PAGE: THE YEAR COMES TO AN END. ALL’S WELL THAT ENDS WELL. FOR SOME.

VIGNETTE 4. Text: Human rights. Seventy years of human absurdities. Everybody’s happy.
4. - Here’s a game for you: Guess how many wars, victims and acts of torture there have been in the seventy years of human rights. If someone guesses the exact figure, Karlitus will pay for a trip for them to go to New York to defecate in front of the United Nations building.

VIGNETTE 5. Text: Hunger strike. It is better to die standing up for justice and freedom than to live on your knees eating barbecued goat meat.
5. - Half Catalonia has already been on hunger strike. Some, for two days; others, one night; the majority, between lunch and dinner... The problem is that while we leave turkey and stuffing on the plate because we can’t squeeze in any more food, there are four people who have been without food for fifteen days... When they die and we go to their mass funeral, will we talk about how bad we felt that day from eating too much when the prisoners were fasting?

VIGNETTE 6. Text: Dying from overeating.
The religiosity of Junqueras forces him to eat the rations of those who are on strike.
6. - Pablo Casado M.A., the leader of the PP, says that Catalan politicians on hunger strike are not on hunger strike at all and are secretly eating. His toadies criticise the strike and poke fun at it. Of course, any information they have about the strike has been invented by their friendly journalists and editors in Madrid. How nice to be on the political right and know that the facts are what you say they are.

VIGNETTE 7. Text: The Mega-prize goes to Catalonia. [Note: At Christmas there is a draw of the Spanish state lottery.]
This year we have been devastated by the application of article 155 (a vague clause in the Spanish Constitution which has been the excuse for suspending the functions of the Catalan government and imposing direct rule from Madrid). What’ll be next on the news – direct rule has been imposed again, or that there has been a big lottery win in Catalonia?
7.- It’s said that the Christmas Mega-Prize in the Spanish State Lottery always goes to areas devastated by some great disaster. Because Catalonia has experienced the catastrophe of the Spanish police, the paramilitary Civil Guard and the Spanish right, Catalonia can expect prizes of millions of euros in the lottery.

VIGNETTE 8. Text: SÁNCHEZ, PUT ON A YELLOW JACKET.
Macron tells Sánchez of his problems with yellow jackets. Sánchez replies: “The violence of your protestors in yellow is nothing compared to the civil war in Catalonia caused by separatists wearing yellow.”
[Note: Violent protests in France have caused a crisis for the French Prime Minister Macron. The demonstrators wear yellow jackets. Coincidentally, peaceful protestors against Spanish repression and the imprisonment and exile of the Catalan Government wear yellow ribbons or laces. For the Spanish media and the Spanish Government, the situation in Catalonia is far worse and a civil war is taking place.]
8.- If only five per cent of the energy that politicians use to stay in power were to be devoted to the problems of their countries, the Earth would be a paradise and we would not need any religion to pull the wool over our eyes.

VIGNETTE 9. Text: EUROPE gives its support to FORCADELL. BORRELL the wanderer.
European Parliamentarians support Carme Forcadell. Borrell suffers an attack of cholic. [Many Euro MPs have called for the release of the imprisoned Speaker of the Catalan Parliament. The Spanish Foreign Minister, a Socialist, but with right-wing leanings and a Spanish ultra-nationalist, has been apoplectic as he cannot control these shows of support from outside the Spanish state.]
9. - Talking of the money raised from TV charity appeals for funding scientific research – will it now have to be devoted exclusively to investigating what ails Borrell mentally? His ineptness in everything he says or does can only be because there’s something not quite right in his head.

VIGNETTE 11. Text: Servile press. The press, which favours the powerful, is rewarded for its services. Under the table, of course.
11.- A servile journalist is recognizable because in a talk show he or she doesn’t talk but rather shouts and systematically interrupts the other programme guests. A loud voice stands in for a functioning brain.

VIGNETTE 12. Text: Celebrity gossip magazines. Such magazines have created a world where everyone is happy. They support a system that has destroyed untold numbers of families, however.
12.- God made couples in the difficult and ultimately failed process of creation. Divorce was initiated by a journalist, who was unemployed, like God, but cleverer.