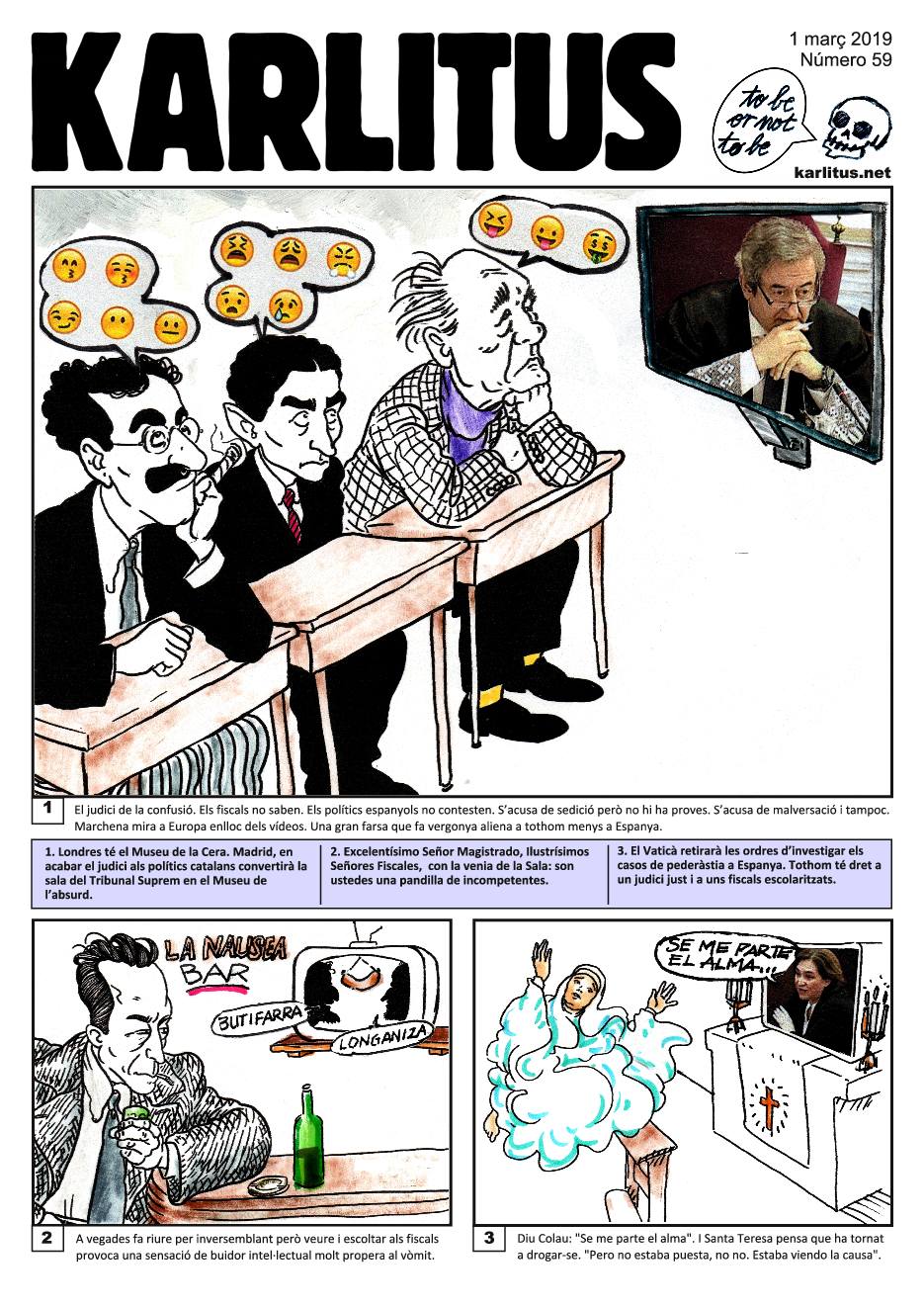 The trial of confusion. The prosecutors know nothing. The Spanish politicians refuse to answer. The accused are charged with sedition but there is no evidence. And there’s no evidence of the mis-spending of public money either. Marchena looks towards Europe instead of looking at the videos of the demonstrations and police violence. A great farce of a trial that would embarrass anyone – but not Spain. [Note: The trial of the Catalan political prisoners. When called as witnesses, the ex-President of Spain, and his ex-Vice-President and ex-Minister of the Interior avoided answering questions about the deployment of the police to repress the independence referendum in Catalonia by claiming ignorance or lapses of memory. The judge knows the trial is a farce but tries to behave in such a way that he cannot be accused of administering false justice if cited to declare before the Court of Justice of the European Union at some future date.]


VIGNETTE 2.
Sometimes the judges’ general ignorance and their questions and comments and are so farcical and unbelievable that you just have to laugh.

2.- Your Honours, the prosecuting judges, I would like to inform you that you are a bunch of incompetent fools.

VIGNETTE 3.
Colau says "It’s soul-rending.” But not for Santa Teresa, the patron saint of Spain. Justice has been done in Rome (sex offenders unpunished), and justice will be done in Madrid (innocent politicians and activists punished). The Catholic Church will always speak out for the oppressed. If it suits them, but it never does.

3.- The Vatican withdraws the orders to investigate cases of pederasty in Spain. Everyone has the right to a fair trial and to prosecutors who have at some point in their lives acquired at least a modicum of education.

VIGNETTE 4.
Traditional Catalan eschatology in action. Shit on your oppressors.


VIGNETTE 5. Speech bubble: OK. Since I can’t speak in Catalan on pain of punishment, I’ll speak in Castilian.
Marchena is completely exhausted from pretending to be unbiased. Result: The mask has slipped.


VIGNETTE 6. Speech bubble: I quake, but stand firm.
Forcadell: "I’ll stand up to you in spite of your humiliations and insults and your demands that I give up my ideals and obey the diktats of the state."

6.- You do not have to be a comic-book hero to defend an idea. Helmets and gloves and boots are distinctive items of dress but are unnecessary. Superpowers and super weapons are not needed either. The simple fact of defending just principles against the machinery of an oppressive state is sufficient.


VIGNETTE 7.
We now know who advises and writes the speeches set in stone for Casado.
ts new finery, there’s no stopping Casado’s crusade.

VIGNETTE 8. Text: Sixteen judges eat the liver… the beginning of a Catalan tongue-twister.
Man is the only animal that stumbles twice over the same stone. However, Spain is different. The Spanish state believes that stones do not exist, and this is why it will always make the same errors again and again.

8.- If the theory of evolution had been developed in Spain, science would have accepted that everything evolved in just one week – that is, that God created everything in seven days. However, this idea of Creation by an omnipotent God is far easier to swallow than the belief that one day the Iberian mind will emerge from its fossilised state.

VIGNETTE 9.
Felip VI as everybody knows him – his nose turned up at the common rabble and at democracy.

9.- The investment group that is bidding for the statue of King Philip VI has as its president the king himself. He doesn’t want it to be burnt after a year has gone by. His wife Letizia does not understand his determination not to be consumed in a fire. "But you're already more than half burnt out as a king", she tells her not-so-popular husband. [Note: a large statue of the Bourbon King is on sale by the artist but the buyer must promise to burn the statue after a year].


VIGNETTE 10.
Kim Jong-un travels on an armoured train to see Trump. For the good of the masses.

VIGNETTE 11.
Trump prepares the meeting with his Korean counterpart. All in the name of peace.

VIGNETTE 12.
It’s like the Dinner Game (Le Diner de Cons) except nobody turns up.

10. 11. 12.- Donald Trump and Kim Jong-un are a new show-business duo. But this one is not the sharp one and his stupid partner, nor the good guy and the bad guy, nor husband and wife. They are both as stupid as each other and just as cynical, and yet without the contrast necessary to create humorous situations, they are able to make us laugh heartily.