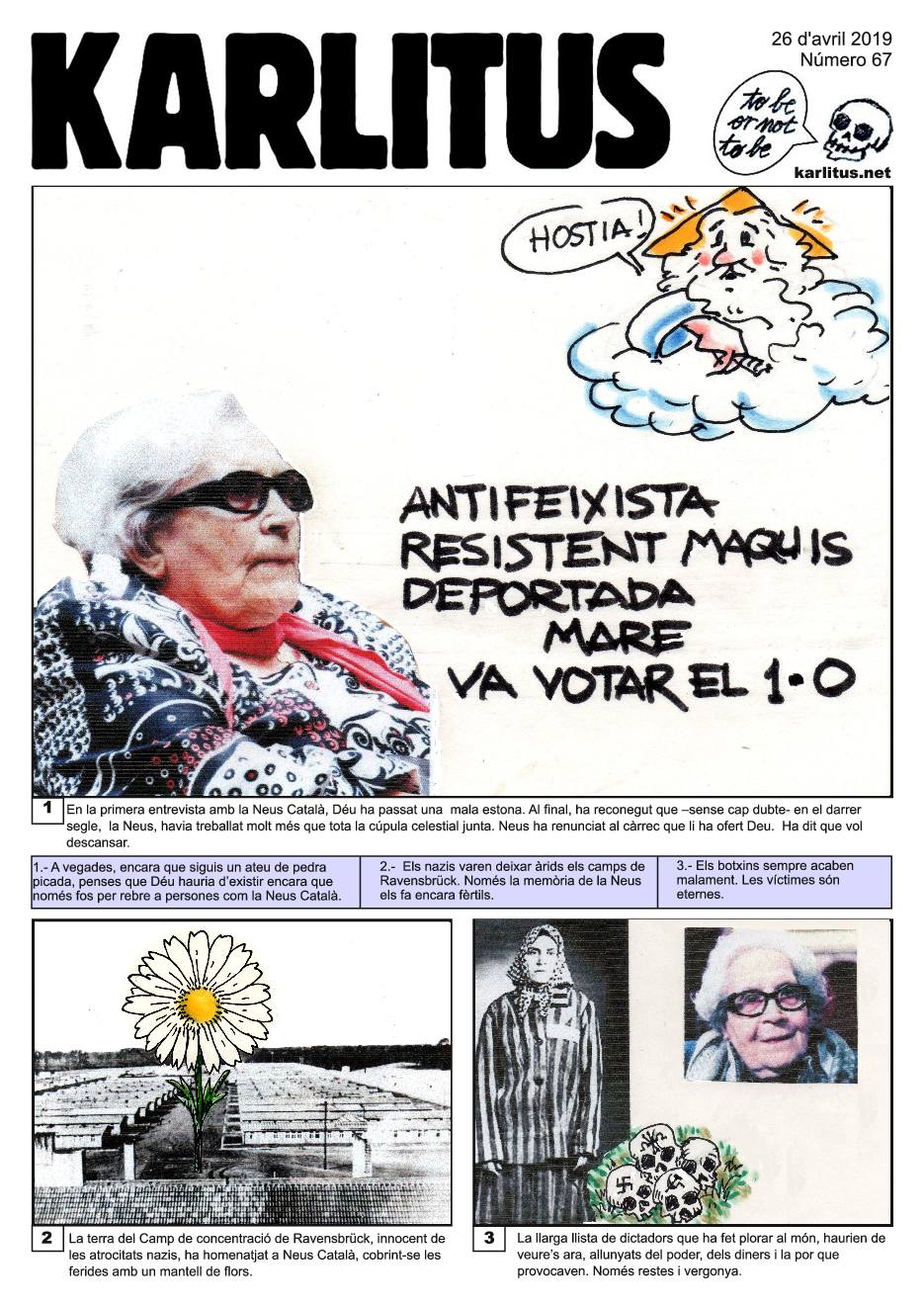 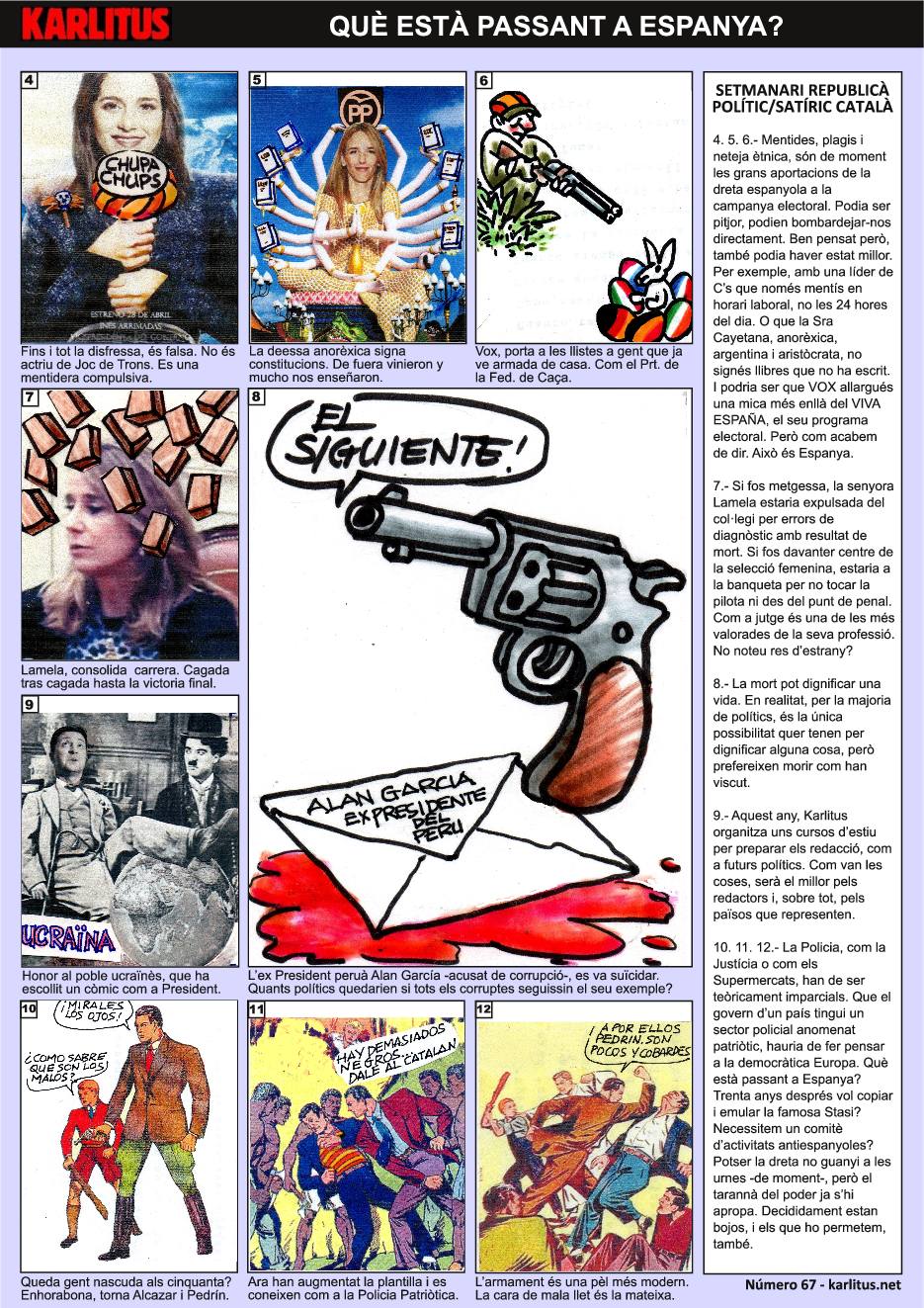 In his first interview with Neus Català, God began to feel rather uncomfortable. Eventually he doubtlessly recognised that in the last century Neus had done a lot more than the whole of the celestial host. Neus refused the post that God offered her. She said that she wanted a rest.
1.- Sometimes, even if you are an out-and-out atheist, you think that God should exist even if it’s only to receive people like Neus Català.

The fields surrounding the Ravensbrück concentration camp, unaware of the Nazi atrocities that took place there, have paid homage to Neus Català with swathes of flowers.

2.- The Nazis left the fields of Ravensbrück a desert. Only the memory of Neus has restored their fertility.

VIGNETTE 3.
If the world’s dictators, who have caused so much pain to the planet, could see their legacy, now that they are bereft of power and riches, and no longer instil fear, they’d see there remains nothing but the memory of the shame they brought, and the vilification of their names and their ill-gotten wealth.
3.- The executioners always end up badly. The memory of their victims is eternal.

[Note: Opposition leader Inés Arrimades] Even the costume is a fake. She is not an actress of in the Game of Thrones. She is a compulsive liar.

The anorexic goddess signs constitutions. They came from far away and they have taught us much.

Vox presents candidates who carry guns for hunting. Like the President of the Hunters’ Federation.

4. 5. 6.- Lies, plagiarism and ethnic cleansing – these are the great contributions that the Spanish right has made to the to the election campaign so far. It could be worse. They could have gone on the attack and bombarded us. But even better for us if the three right-wing parties (the far right, the far-far right, and the far-far-far right) had done the following: insisted that the leader of the Citizens’ Party lied and insulted only during working hours, and not 24 hours a day. Or that Mrs. Cayetana of the PP, the triple A candidate for the Spanish parliament (anorexic, Argentinian and aristocratic), did not sign books that she had not written though published under her name. And that the VOX party could explain if its election manifesto extended a little beyond shouting VIVA ESPAÑA ad infinitum. But we shouldn’t raise our hopes too high. After all, this is Spain.

Judge Lamela’s career is what one might expect of a Spanish legal expert. One flagrant failure after another until the final victory.

7.-If she were a doctor, Mrs. Lamela would have been expelled from the medical profession due to her numerous faulty diagnoses and dead patients. If she was the centre forward in a women's football team, they’d keep her on the sidelines to stop her from getting anywhere near the ball, even if the team was down to five players from eleven through injuries. As a judge, her fellow practitioners of the law hold her in the highest regard. Isn’t there something rather odd about that?

Former Peruvian President Alan Garcia - accused of corruption – has committed suicide. How many politicians would be left if all the corrupt ones were to follow example?

8.- Death can dignify a life. In fact, for most politicians, a self-administered death is the only possibility they have to try and dignify their past actions. But they usually prefer to die as they have lived.

Well done the Ukrainians, who have chosen a comedian for President.

9.- This year Karlitus will organize summer courses to prepare its humourists for future careers as politicians. As things are, it will be the best thing that could happen to the writers and cartoonists, and, above all, for the countries they will lead.


VIGNETTE 10. Speech bubbles: How do we know they're the baddies? / Look them in the eyes.

Are there still people born in the fifties living among us? Congratulations, Alcázar and Pedrín have returned. [Note: Roberto Alcázar y Pedrín (originally Roberto Alcázar, the intrepid Spanish explorer) was a story in a comic from the year 1940].

VIGNETTE 11. Speech bubble: Too many blacks. Strike the Catalan (instead).

The number of personnel has been increased from two to many thousands and they’re now known as the Patriotic Police.


VIGNETTE 12. Speech bubble: Go for them, Pedrín! There are only a few of them and they're all cowards!

The weaponry is the same, though slightly modernized. The ugly looks they give people though is exactly the same.

10. 11. 12.- The Police, like the justice system or the local supermarket, has in theory to be unbiased. That the government of a country has a section of the police which styles itself as the patriotic police should make democratic Europeans think - what exactly is happening in Spain? Do they want to model themselves on the infamous Stasi? Do we need a committee of anti-Spanish activities? Perhaps the right has not won outright control at the ballot boxes - for the moment - but they see power coming into their hands eventually. The problem is that they’re criminally insane – but we’re mad too if we allow them to exist and gain support.